According to Ye Peijian, an expert with the China Aerospace Science and Technology Corporation Fifth Research Academy, Chang'e-5 will consist of the orbiter, the return vehicle, the ascender and the lander. The orbiter and return vehicle will orbit the moon, while the lander and ascender will land on the moon.

After the lander finishes taking samples, the samples will be placed in containers carried by the ascender, which will then dock with the orbiter and the return vehicle. The samples will be transferred to the return vehicle, which will eventually bring them to Earth. Hu Hao, the chief designer of the third phase, said Chang'e-5 weighs 8.2 tons and will be launched by the rocket Long March 5.

The mission is expected to achieve five firsts for China since the country initiated its space exploration programs: first unmanned sampling, first takeoff from the moon's surface, first unmanned docking on the moon orbiting 380,000km from Earth, and first return to Earth with lunar soil samples at a speed close to the escape velocity.
Click to expand...

China's newly delivered stereo mapping satellite, "Ziyuan-3 02", will go a long way to monitoring the progress of major engineering projects, according to Sun Chengzhi, deputy director of the Satellite Surveying and Mapping Center of the National Administration of Surveying, Mapping and Geoinformation (NASG).

The satellite. which was previously owned by the State Administration of Science, Technology and Industry for National Defense, was officially handed over to the NASG. Sun said NASG will use it in geography surveying and mapping, urban construction, agriculture, forestry, water resources and other areas in the future.

"This is part of the STB (Set Top Box) service provided by the satellite. We can get the image shot by Ziyuan-3 02 on the cloud platform in 12 hours, which will be available to all provinces, thus raising the efficiency and conveniences," said Sun.The STB service will enable navigation map providers to renew the latest data.

Sun said with the two Ziyuan-3 satellites, China will enjoy a faster update speed of surveying and mapping data and a better image resolution of mapping. The Ziyuan-3 02 satellite is expected to create economic benefits of more than 10 billion yuan.

"Compared with Ziyuan-3 01 satellite, Ziyuan-3 02 has a new function of accurately measuring height. We do not have references in measuring height in foreign countries. So we use laser as reference. That will better meet the requirements of the building of 'one belt, one road'," said Li Pengde, deputy director of NASG.

"With regard to urban construction, such as illegal structures, you cannot identify the height as the images are plane. Ziyuan-3 02 satellite provides 3-D images, thus showing the height of illegal structures. So you can immediately find and even figure out how many storeys have been illegally added," said Sun Chengzhi, deputy director of the Satellite Surveying and Mapping Center of NASG.

The Ziyuan-3 02 satellite was launched at the Taiyuan Satellite Launch Center in north China's Shanxi Province on May 30 this year. After orbiting for more than 200 days, it has captured effective images covering 32 million square kilometers.
Click to expand...

Weighing around 500 kilograms each, the SuperView-1 01/02 satellites are capable of identifying the details of the ground target, such as the type of cars, from an altitude of 500 km by using a 625-mm-diameter camera installed on each of them, said the engineers.

"Take the region within Beijing’s Sixth Ring Road for example. Each time the satellites pass by the region, they can piece together a panorama image of the entire region with a 0.5-meter resolution and a swath width of 12 km," said Zhang Xiaomin, the deputy general manager of Dongfanghong Ltd. Co., a subsidiary of CASC.

The satellites also feature multiple-point targets collecting technology, which considerably promotes the efficiency of the satellites’ operation. Also, the satellites’ eight-year service duration is another key to it being competitive when compared with rival products."Long duration, long-time service, like five, eight years or more, is the premise of outstanding economic benefit and operational performance for our clients," said Zhang.

In the long term, CASC plans to digitalize its current satellite data service and make it available online. "One business model is based on the internet. Clients can access our data platform through the internet. People can log in to view our data, and obtain the data through certain business models. We are also developing an app for mobile devices, through which the clients can obtain our data on mobile devices such as mobile phones," said Xu Wen, the general manager of Siwei Surveying and Mapping Technology Co. Ltd., another subsidiary of CASC.
Click to expand...

Registered Member
First launch of the year 2017: TXJSSY-2 launched by a CZ-3BE. 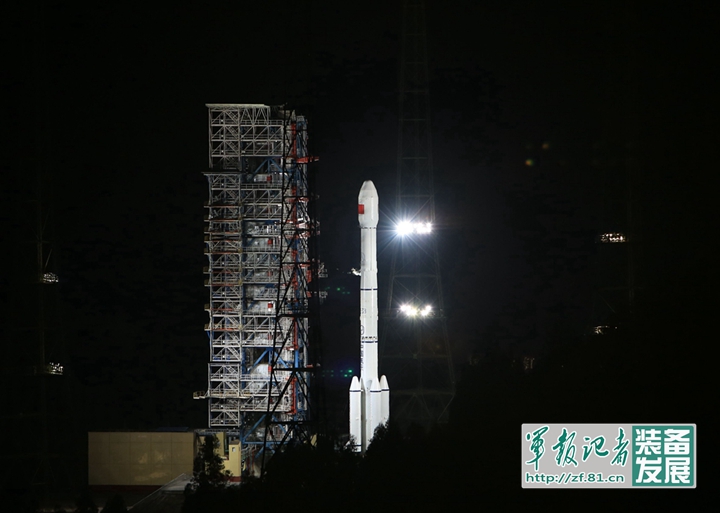 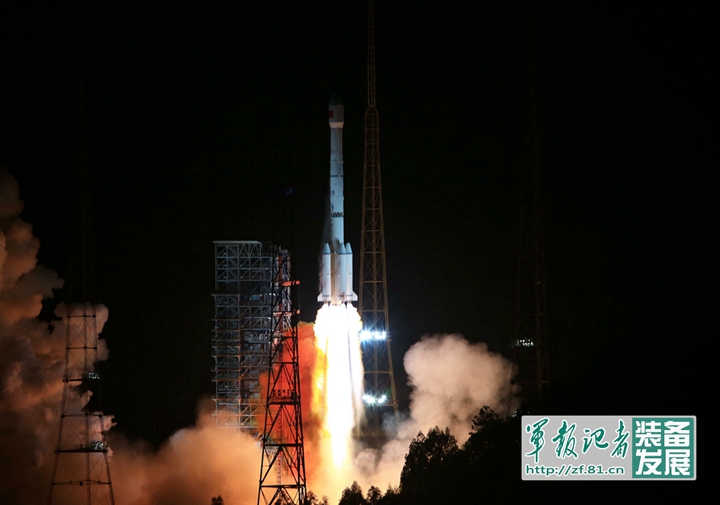 TXJSSY-2 will conduct experimentation and verification of multi-band, broad-band and high-rate data transmission.

Early warning satellite "Fire Eye No. 1" launched and was released under the name of "Communication Technology Test Satellite No. 2", but the real name leaked out to local coverage. 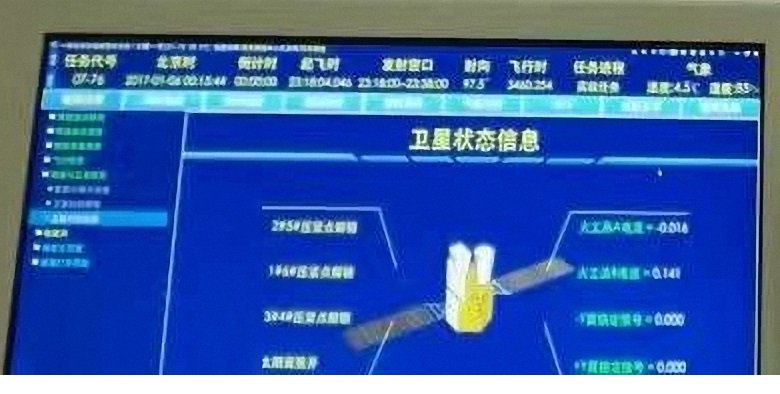 Early warning satellite "Fire Eye No. 1" launched and was released under the name of "Communication Technology Test Satellite No. 2", but the real name leaked out to local coverage.
Click to expand... 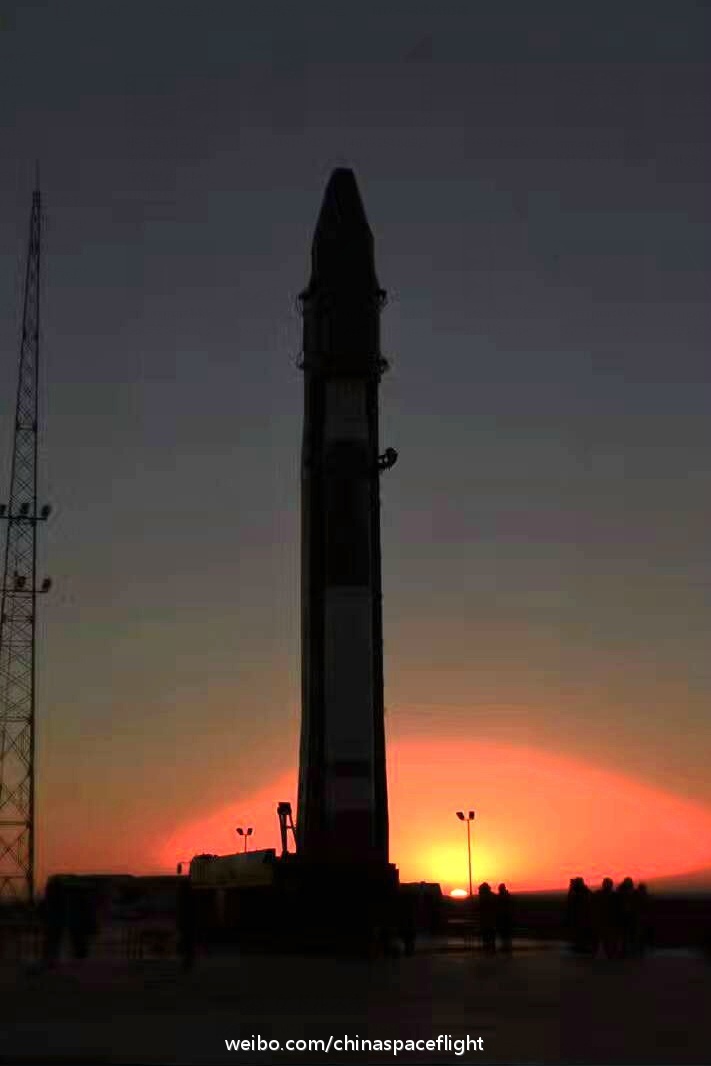 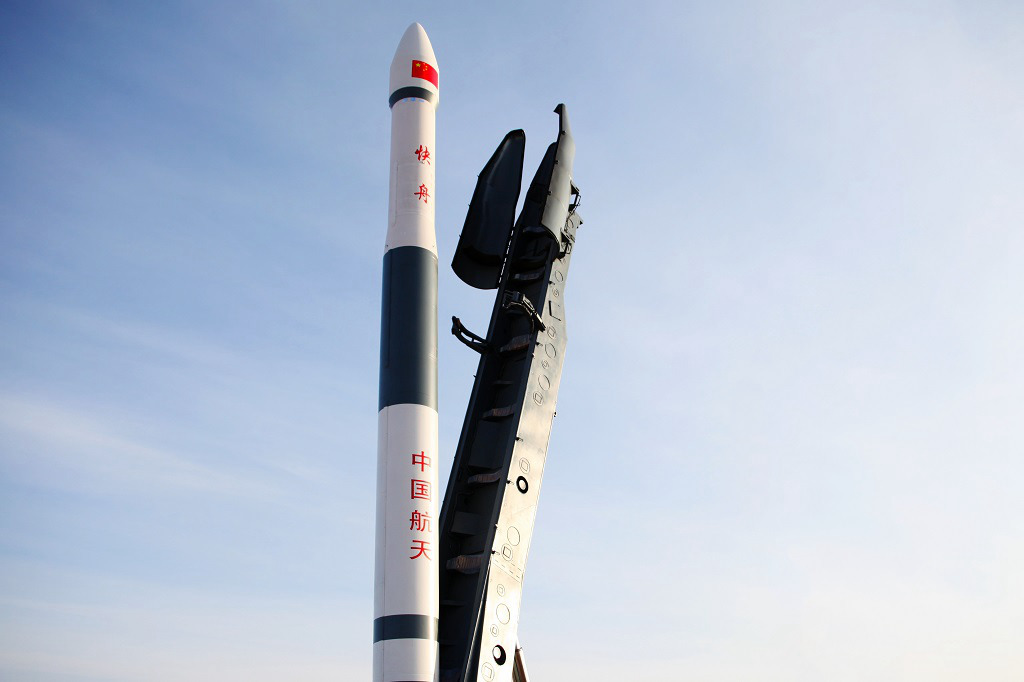 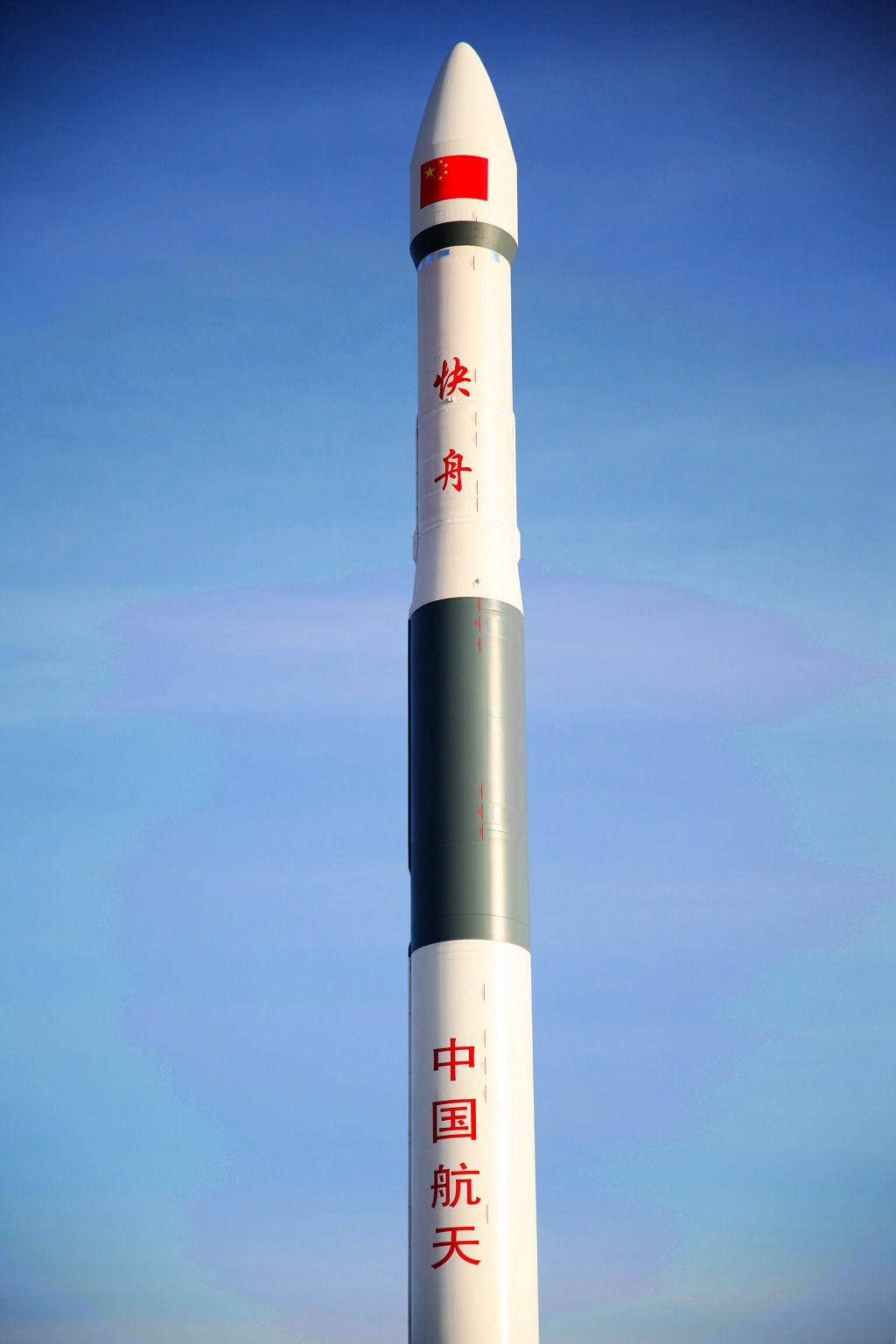 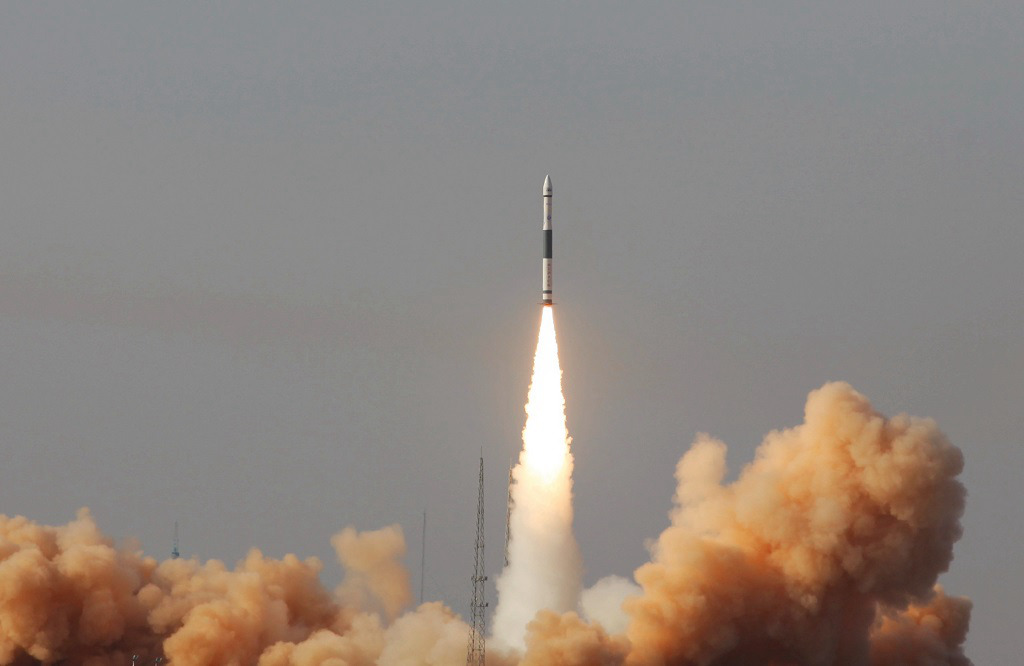 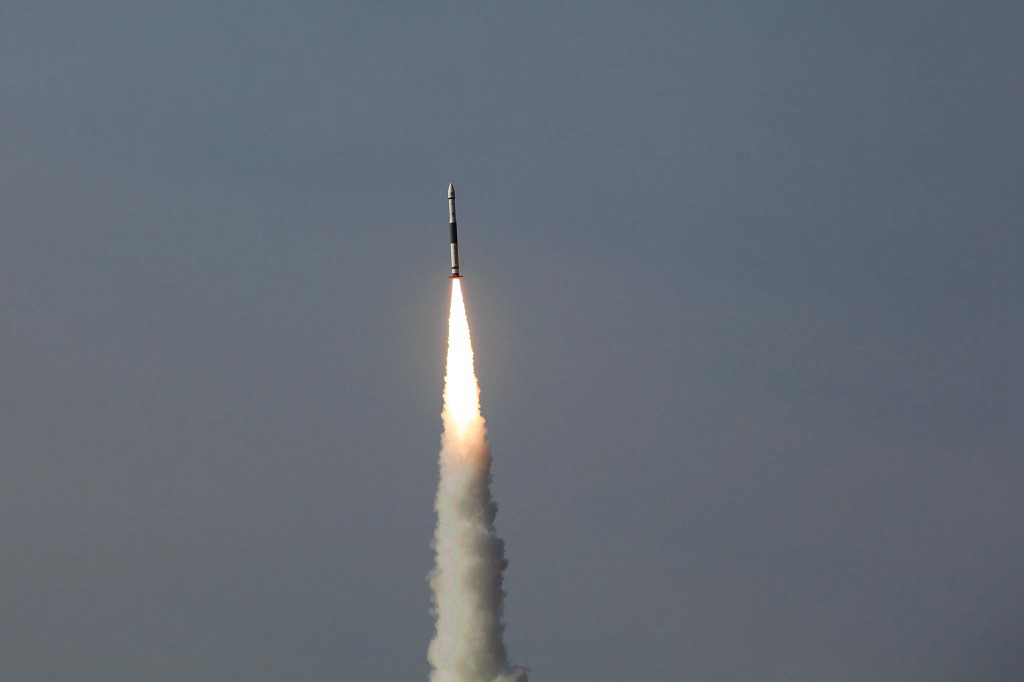