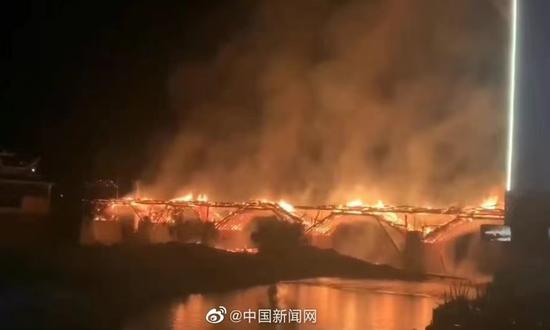 China's 900-year-old wood arch bridge known as the Wan'an bridge built in the Song Dynasty (960-1127) in Pingnan county, East China's Fujian Province, has been marred by fire on Saturday night, leading to the collapse of the longest wood arch bridge in China. No casualties were reported in the fire.
The cause of the fire is still under investigation. The Criminal Investigation Department of the Pingnan County Public Security Bureau has stepped in for the case's further inquiry.
"I speculate it was likely to be caused by man-made conducts and not a natural disaster, the spontaneous combustion of bridge on water is rare." Xu Yitao, an ancient architecture expert of Peking University, told the Global Times on Sunday.
Although the open fires of the bridge had been putted out in around 10 hours, the 900-year-old wood bridge's body has been burnt to collapse during the first 20 minutes of fire, as Xu noted, its unique wooden structure made it even more susceptible to damage by the fire.
Also known as the Bridge of Universal Peace, the Wan'an bridge was China's longest wood arch bridge ranging 98.2 metres.
It holds significant cultural value as it shows ancient Chinese mastered wisdom and ingenuities on wooden architecture designs, especially when the wooden arch bridge prototype in a length like such was extremely difficult to manifest.
"Bridges are often made of stones, the wooden arch bridge condenses a lot of Chinese ancient wisdoms, techniques and also the economic thinking of choosing the wood material."
"It was a lost example to prove the Chinese wisdoms on wooden architecture like the one you see from art piece 'Along the River During the Qingming Festival'," Xu remarked.
Saturday's incident was not the first time the Wan'an bridge was threatened by fires. During the Qing Dynasty (1644-1911) in the reign of the emperor Kangxi, the bridge had also been burnt and later restored.
Fire prevention is one of the important works needed for protecting ancient wooden architectures, Shan Jixiang, head of China Cultural Relics Academy and former curator of the Palace Museum, told the Global Times on Sunday.
In 2005, the bridge became one of the Sixth batch of national key cultural relics protection units.
The damages led experts to calls for enhanced "four preventions" solution to protect ancient wooden architectures.
Xu explained to the Global Times that the fire protection, using monitoring system for ensuring ancient architectures security, preventing damages caused by thunder, enhancing human preservations such as patrolling, and building close ties to local fire brigades were four major aspects of the unified protection system that can reduce potential damages to ancient buildings.
Shan also noted that fire prevention needs to be carried out according to the specific situation of the architectures; for example, researchers were more focused on thunder prevention of the Palace Museum as it had caught fire before in history from being struck by thunder.
"Other methods include applying flame retardant materials on wooden buildings, but this is debatable when it comes to architectural relics. A more effective way is to enhance fire alarm measures, for example, installing automatic induction fire extinguishing facilities, water mist induction device and such," Xu noted.
Before the Wan'an bridge, in 2021, the Wengding village, the last primitive tribe of China in Southwest China's Yunnan Province was engulfed by fire after an 8-year-old child was playing with fire in the village.
Oversees, in 2019, France's most famous cultural landmark Cathédrale Notre Dame de Paris had also been swallowed by fires that it alarmed world conservation for ancient architectures.
"It is can be said that nowadays, such disasters on ancient architectures are unavoidable, especially when they still engage with people's activities," Xu noted.
"The more effective way to protect such architectural relics is human-being oriented. The public should be more conscious on how we behave. This is related to public education on such relic's values. Conserving them is not merely researcher's job." Xiao Fangping, an architectural archaeologist in Wuhan, told the Global Times.
S

Registered Member
According to the MoFA spokesperson, China and Korea have reached agreement on the THAAD issue for the time being as Korea promises to keep its pledges on THAAD by the previous Korean government.

He added that Seoul had committed to a policy of “Three Nos and One Limit,” the latter apparently referring to a pledge to limit the operations of the THAAD battery already in place, something Seoul has never publicly acknowledged.
Click to expand...

(ECNS) -- A special squad of 5,000 well-trained chickens has been formed to fight locusts in Yining County of the Ili Kazakh Autonomous Prefecture, Xinjiang Uyghur Autonomous Region.


Back in May this year, the local bureau of agriculture and rural affairs in Xinjiang introduced disease-resistant and fast-running chickens for locust control on the grasslands.


The use of chickens protects grasslands and increases the incomes of local farmers and herders.

There is a video at the link provided, embed didn't work for the site.

(ECNS) -- The roof of an old residential building was turned into a shared garden after renovation in Chengdu, southwest China's Sichuan Province.


The residence community was built in 1999, with no forestation and public leisure space.


Mobilized by the community, over 60 households made the roof into a shared garden of 1,100 square meters.

Again, video at the link provided.

But they should be required to go for re-education camp. Why obtain foreign citizenship. Traitors
You must log in or register to reply here.