Kalec said:
Six 094 is not outrageously is high though, and it is reasonable to keep a SSBN development team over time. I think it is the main reason that PLAN did one-of-a-kind type commission on SSN fleets, so many variant over years meanwhile surface battleship got mass-produced in a short time once finalized plan. However nuclear deterrence is still a PLARF job as the main point is to reduce possibility of a conventional US-China war to zero.

For so many years, US "analyst" or "think tank" hypered on Taiwan because China is not in the MAD level nuclear deterrence. What China urgently needs right now is large quantity of warheads & delivery vehicles enough to blow up every major cities in CONUS. Neither SSBN nor ALBM can do this job.

It is so weird that ppl keeps talking about a non-existent US first strike against China as if China is conventionally threatening US to a point that US must use nuclear weapon to respond or the country collapses. On the contrary, China was under consistent American nuclear coercion for 70 years and it is US who should worry about this new development and how to deter Russia and China simultaneously instead of the other way around.

TL;DR if one is insecure of nuclear survivability after the nuclear expansion, they should haven't slept well for the past 70 years when Chinese MAD is non-existent.


Totally agreed, it is cool to keep SSBN industry and may find them handy in the future but certainly not right now. It is why they are making one-of-a-kind variant instead of mass producing like 052Ds.

Another point is SSBN can withhold the first wave of nuclear exchange and maintain Chinese nuclear status even after the nuclear war if the war ever stops here.
Click to expand...

Well, my thinking is that a fleet of 6-8 SSBNs is reasonable for a fleet that manages to balance having a viable SSBN industry (and subsuppliers), and a moderate yet credible subsurface deterrence.
In coming years perhaps a max of 12 SSBNs would be a reasonable goal.

If they were pursuing 20-24 SSBNs, then I certainly agree that would be a bit much at this stage.

Meanwhile, most of their nuclear deterrence will of course be in land based TEL, and silos (especially the hundreds of new ones which should be compatible with the new heavyweight solid fuel ICBM that they're working on).
G

This is missing a bunch of stuff.

On the Russian side the RS-28 Sarmat is not in the chart, nor the Zircon hypersonic cruise missile, nor the already in service hypersonic glide vehicle Avangard, the Kh-102 stealthy cruise missile, or the Iskander. If tactical nukes were not supposed to be in the map then they put the LRSO ALCM in the US chart?

On the Chinese side it does not have the JL-2A, the DF-ZF hypersonic glide vehicle, nor the lower range missiles like DF-26 or M-20.

On the US side it lacks the paraphernalia of missile systems in development like the Dark Eagle.
T

tphuang said:
I think that's part of it. The other part is having crew that are experienced in doing patrols. The end goal is 096 and being able to do patrol in open ocean. I do think that 094 met certain criteria for plan. Otherwise, they wouldn't have built 8 of them.
Click to expand...

Come again, please? wouldn't have built 8 094 ? did i read this right? What source is there that claims China built 8 094 to date?

Totoro said:
Come again, please? wouldn't have built 8 094 ? did i read this right? What source is there that claims China built 8 094 to date?
Click to expand...

Totoro said:
Come again, please? wouldn't have built 8 094 ? did i read this right? What source is there that claims China built 8 094 to date?
Click to expand...

I'm too lazy to look it up now, but I read they have built 8 of them. Including a couple very recently. # of 094 built is going to be a larger number than # capable of patrol. Believe whatever you want, doesn't matter to me.
K

Registered Member
https://twitter.com/i/web/status/1594933697442201604
They are firing ballistic missile like sausages this week, wonder when US intelligence will reveal some details on these tests.
K

This is supposed to be a silo but... the only I see is a pile of sand and where is the silo lad?

This could be an unfinished launch control center or command post, much more generous in size compared with Minuteman LCC. I have found at least nine of similar construction site like this one, in line with assumption of 10 silos per flight/LCC.

And these look like hangers for terminal air defense system, similar pattern with the one in Korla. I haven't counted many of such site being built but it could be also nine as I assume each flight has one AA unit.

I think it is now safe to say the silo diameter is at least 6 meters as the reel is twice of a car in length.

Finally not only a windmill but a solar panel farm now, very renewable.

Registered Member
Could it be control capsule, which is buried deep underground and covered with an overground building?

Here is in comparison with Minuteman LCC capsule, which is approximately from 40 feet to 60 feet underground. And this whatever shelter looks deeper than Minuteman LCC. 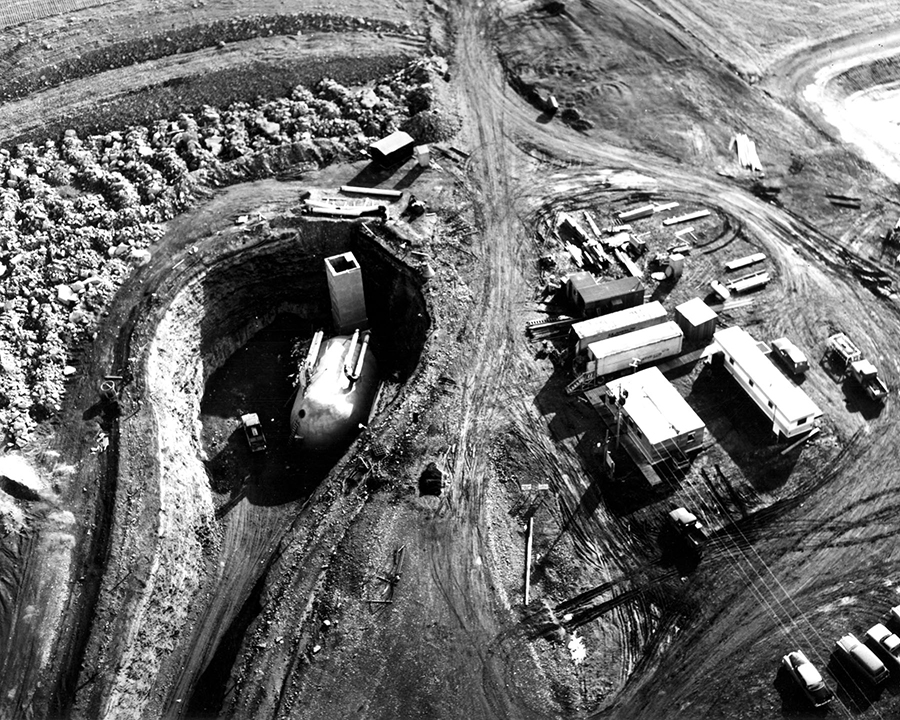 I fear this is signaling due to a back channel threat. Some certain regime may have attempted strategic blackmail, and this is China's response. Otherwise there's not much point in concentrating so many tests at once, when telemetry from older tests are still being reviewed.
You must log in or register to reply here.