Holy moly! Looks like CGI straight out of Hollywood that first image. Guess the saying is true, "Hollywood shows the future while China makes it".

Andy Luo, solutions director of Eastern Africa Enterprise at Huawei told a technology forum in Nairobi, the capital of Kenya, that the firm has launched its new proprietary Ocean Protect data storage system designed and fitted with algorithms and adaptable for variable data center sizes.

The Chinese technology firm observed that its intelligent data infrastructure has been developed in anticipation of a future that will be characterized by more data, faster retrieval and sharing of information and a greater focus on data security.

"Data is the new gold in the digital age, and now, primary storage is going to be done on flash-based technologies," Luo noted.

He said that as the industry develops, it is important to consider how data can be safely stored on platforms, like the public or private cloud of an organization.
K

I prefer Chinese companies to use less cobalt which is very expensive. 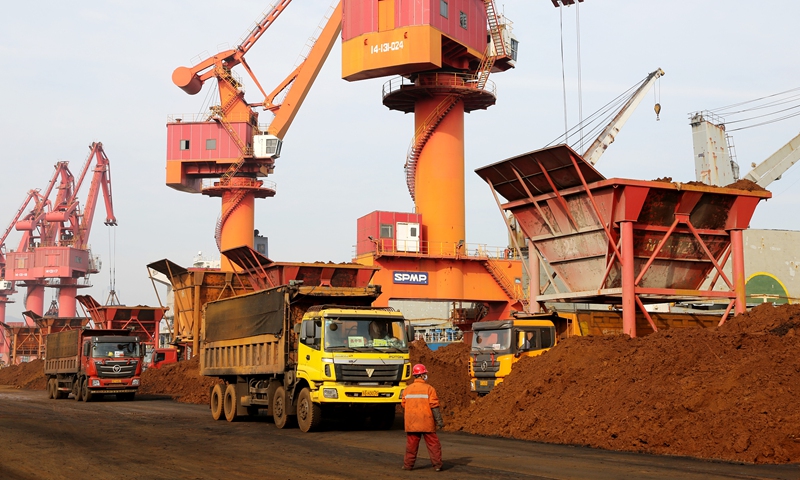 Iron ore Photo:VCG
Company representatives and officials are actively seeking a joint solution to a quick resumption of work at the Simandou project in Guinea, which has the world's largest untapped iron ore reserves, the Global Times has learned. The project was suspended last Friday by Guinea's interim government.

The Simandou project, jointly owned by several international conglomerates, including Singapore's Winning International Group, a number of Chinese-funded enterprises and Rio Tinto, has made slow progress for various reasons such as political instability, costly infrastructure input for mining and the distribution of shares.

The Economic and Commercial Office of the Chinese Embassy in Guinea told the Global Times on Monday that the Guinea's government had suspended all four blocks of the Simandou project.

The Guinean government is trying to promote the joint development of all four blocks, but due to historical factors, corporate ideas and other reasons, there are many technical obstacles to this goal, the Economic and Commercial Office of the Chinese Embassy said.

"At present, all parties are maintaining communication, actively negotiating, and working hard to promote the resumption of the project," the office said.

Although no conclusion has been reached yet, the Embassy believes that after a series of communications and negotiations, the Guinean government will make a unified plan for the development of Simandou.

Guinea's government on Friday ordered the halt of all construction activities at the Simandou iron ore deposit, saying that it was seeking to clarify how the country's interests will be preserved, according to Reuters.

Rio Tinto told the Global Times that it is committed to developing the Simandou project in the best interests of all parties, including the government of Guinea and broader Guinean society.

The Guinean government said any mine developer must build a railway across the country to ensure that the iron ore mined in Simandou is exported from Guinea's own ports, which greatly increases the cost of mine development. It's also not what the miners originally intended, which was to ship iron ore via ports in neighboring Liberia, a much shorter route.

Due to the complicated political situation in Guinea and other factors, the deposit has changed hands several times and has not been effectively developed, despite having the largest iron ore reserves and the highest quality in the world.

Data from Huarong Futures showed that the deposit has a total resource of more than 10 billion tons. Of this, the iron ore resource is 2.25 billion tons, and the proven iron ore grade is about 66-67 percent, which is much higher than the global average.

Annual output is expected to reach 150 million tons, according to media reports.

If development is to be carried out in a unified way, the relevant companies might have to adjust the original operation plan, Wang Guoqing, research director at the Beijing Lange Steel Information Research Center, told the Global Times on Tuesday.


Regulations have been eased to facilitate the export of lemons from African nations to China. Photo: AFP

An easing of trade rules for some
Please, Log in or Register to view URLs content!
countries by the Chinese customs authorities is allowing more agricultural products from the continent into China.


Please, Log in or Register to view URLs content!
, Kenya and Zimbabwe are among the African countries that have recently signed revised protocols allowing them access to the lucrative Chinese consumer market.

The move is in line with Chinese President Xi Jinping’s promise during the
Please, Log in or Register to view URLs content!
last year to open “green lanes” for agricultural products into China, speed up inspection and quarantine procedures, and broaden the products on which no tariff is charged.

South Africa, one of the largest lemon producers, can now export the fruit after China removed a cold-storage requirement, in place to prevent pests, that blocked many of its products. It has opened a market that is expected to generate millions of dollars in new revenue.

Last month, South Africa shipped its first batch of 100,000 lemons to China. It also in December signed a protocol with China on the export of pears, which is expected to increase the 22 per cent share of the country’s exported pears that go to the Far East.

The CEO of the Citrus Growers Association of Southern Africa (CGA), Justin Chadwick, said the revised lemon protocol had taken six years to finalise, following lobbying from the industry.

“It’s an immense milestone when it comes to expanding access to the Chinese market,” Chadwick said, explaining that the lemons were susceptible to cold damage at the previously required shipping temperatures.

Chadwick said that until the deal, Argentina and Chile had dominated southern hemisphere lemon exports to China, but that South Africa was expected to surpass both, exporting 50,000 tonnes of lemons annually, bringing in 700 million rand in export revenue and creating 2,500 jobs.

Please, Log in or Register to view URLs content!
Zimbabwe, too, can export fruit to China after it clinched a lucrative sweet citrus export deal with Beijing that covers grapefruit, sweet oranges, mandarins, sour oranges and lemons.

“The sweet and juicy Zimbabwean citrus will join the Chinese market,” said Guo Shaochun, China’s ambassador to Zimbabwe, early this year. “We are implementing President Xi’s pledge that China will open a green channel. It will benefit more Zimbabwean farmers.”


“The green lane can work when Beijing puts its mind to it,” said Yun Sun, director of the Stimson Centre’s China programme in Washington. “This is an area with identified potential for growth.”

Global research and advisory company Oxford Business Group noted in its recent report that despite global supply chain challenges, trade between China and Africa rose to record levels in 2021.

It said the increase partially reflected a shift in Chinese policy away from state-backed investments and towards trade and cooperation. According to Chinese customs data, trade with Africa increased by 35 per cent last year, to a record high of US$254 billion. Virginia Mavhunga displays fruits and vegetables by the roadside for sale to motorists in Murehwa, Zimbabwe. Photo: AP
This growth was driven largely by an increase in Chinese exports to the continent, Oxford Business Group said. “Volumes look set to continue growing, with trade constituting a key element in a joint plan released by Africa and China at the end of last year during the meeting of the FOCAC,” it said.

“This reflects a growing Chinese appetite for African products, with agricultural goods doing particularly well: between July 2020 and July 2021 exports of rubber, cotton and coffee doubled.”

In January, lawmakers in the Chinese province of Hunan approved regulation to boost trade with Africa. A free-trade zone will be established to help grow trade activity.

“The CGA has had positive engagements with the minister of agriculture … regarding expanded market access in China,” Chadwick said.

Please, Log in or Register to view URLs content!
In Kenya, during Chinese Foreign Minister Wang Yi’s visit to Nairobi, the two countries signed a revised protocol to allow fresh avocado and aquatic products into the Chinese market, which previously would accept only frozen fruits – locking out several traders in the East African country which could not afford freezing facilities.

Most Chinese exports to Africa are finished products – from textiles to electronics – while African sales to China are dominated by raw materials and unprocessed products, resulting in a trade surplus in China’s favour.

To help balance trade, Xi promised in November to grow the value of imports from Africa to US$300 billion in the next three years.
In a speech to the FOCAC, he said that China would offer US$10 billion in trade finance to support African exports.

Tanzania began exporting soybeans to China in 2020, as Beijing sought to cut its reliance on the United States and Brazil. Similar deals have been reached for avocados, tea, coffee and roses from Kenya, coffee and soybeans from Ethiopia, beef products from Namibia and Botswana, fruit from South Africa, and coffee from Rwanda.
G

Registered Member
Actually Ethiopia is having a huge growth in its textile industry as well. I expect more light industry to move to Africa.
You must log in or register to reply here.