Registered Member
Chinese companies need to make sure to not end up like Japan where many lack international exposure.
C

Registered Member
international exposure, sure. but not dependence

As an Australian, I have seen many examples of impressive hardware engineering from Chinese companies. Of Chinese-developed software, however, I have heard little positive. I hope that China can develop and find commercial success with high-quality software and hardware combinations that are independent of the west, but it seems a difficult path to travel.
L

Competing with US software companies overseas is a good way to improve themselves. Apps like Tiktok has shown that they can do what is necessary to be competitive.
T

QQ, Weibo, WeChat and Alipay are examples of world class Chinese software that are able to redefine and blend the genres of messenging app and social media, with WeChat adding the mobile payment. WeChat and Alipay are the gold standard in mobile payment --- you don't need a credit card in China, all you need is a smartphone with either one of these apps. These apps would make or break any new mobile OS platform in China. One of the real gauge of the software art I would say, would be demonstrated in that industry we call games. I also think that Chinese games have done very well here. While the world is caught in the Battle Royale rage of Fortnite and PUBG, including China, but in Japan, this genre is dominated by a game called Knives Out, which comes from NetEase, a Chinese gaming company. A game called Mobile Legends is one of the top grossing mobile games in the world, this by developers in Shanghai. I have played a wuxia MMO called Age of Wushu, and I was very impressed with the MMO (the microtransactions, not so much). For hardware integration and human machine interface, you should take a look at Android UIs on smartphones. I would think that Google can take a hint from some of the Chinese skins out there. Kudos to Oppo's, OnePlus and Xiaomi's skins, I think they are way better than Samsung's, which is horrible in my opinion. I would put Huawei's skin ahead of Samsung, but Xiaomi's ahead of Huawei's in my taste.

I am left impressed and very confident on the state of Chinese software. There is much attention in the art of making things as convenient, aesthetically pleasing and efficient as possible. If there is an area I like to see them put more attention on, it would be on security.

Price of REM has gone up!

Please, Log in or Register to view URLs content!
Weapon of choice? China rare earth prices soar on their potential role in trade war
By Tom Daly and Shivani Singh,Reuters 9 hours ago 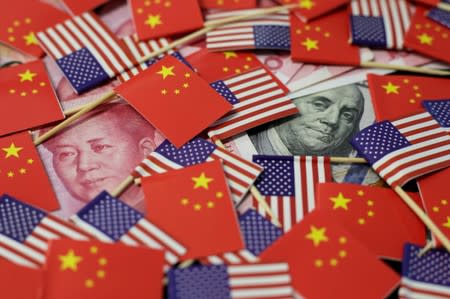 BEIJING (Reuters) - Chinese rare earth prices are set to climb further beyond multi-year highs hit following a flurry of state media reports that Beijing could weaponise its supply-dominance of the prized minerals in its trade war with Washington.

Rare earths, a group of 17 elements that appear in low concentrations in the ground, are used in a wide-range of products stretching from lasers and military equipment to magnets found in consumer electronics.

China supplied 80% of the rare earths imported by the United States from 2014 to 2017, with Chinese state newspapers last month reporting Beijing could use that as leverage in the ongoing trade dispute between the two.

"(Magnet-related rare earths) are the ideal materials to weaponise ... because they are so critical to high-demand, highly-competitive, price-sensitive industries," said Ryan Castilloux, managing director of Adamas Intelligence, a consultancy that tracks rare earths markets.

"(Such rare earths) are collectively responsible for over 90% of the demand market's value each year ... (so they) will yield the most juice for the squeeze," Castilloux said by email from Toronto, adding that prices were set to keep rising.

Prices of dysprosium metal, used in magnets, high-powered lamps and nuclear control rods, are currently assessed by Asian Metal at their highest since June 2015 at 2,025 yuan ($292.98) per kg.

That is up nearly 14 percent from May 20, the day Chinese President Xi Jinping visited a rare earth plant, sparking speculation the materials could be the next front in the Sino-U.S. trade war.

The price of neodymium metal, critical to the production of some magnets used in motors and turbines, has risen to its highest since last July at $63.25 a kg, up about 30% since May 20, according to Asian Metal.

The price of gadolinium oxide, used in medical imaging devices and fuel cells, is up 12.6 percent from May 20 at 192,500 yuan a tonne, the highest in five years.

The state-run Securities Times reported on May 13 that customs in the southwestern province of Yunnan would ban imports of rare earths from neighbouring Myanmar, a key supplier of middle-heavy rare earth feedstock, from May 15.

"But then a couple of days later, you can see a big movement in the prices - so that was mainly because of this possible weaponising of rare earths," Lau said.

"If China indeed weaponises rare earths, the U.S. will not have enough supply because it needs some lead time to build their own processing capacity, which currently is zero," she added.

Another analyst, who asked not to be identified due to the sensitivity of the matter, said that six major rare earth producers in China held the most stocks in the spot market, giving them power over prices.

Registered Member
in my opinion if china want to use rare earth weapon they must act immediatly to disrupt usa supply chains, it would take years to rebuild a rare earth industry for usa (think also about that rare earth demand is skyrocketing), in this time american firms will out of market and crippled by devasting soaring prices.
G

It is less bad than some people think. One example is Kingsoft's WPS Office.
There is also a huge internal web applications market because of the firewall and the language.
Tencent has a huge applications and multimedia conglomerate with their own e-currency and media empire.

Success outside China is way more limited however.
S

Senior officials at the U.S.-based tech giant have warned it wouldn’t be able to update its Android operating system on Huawei’s smartphones, prompting the Chinese company to develop its own version of the software, the FT says. A Huawei-modified version of Android, Google argued, could then be more vulnerable to hacking risks.
Click to expand...

Ark/Hongmeng isn't even out yet, and Google is already freaking out!