B.I.B. said:
Just wondering ,on how bad weather conditions have to get before carrier ops are cancelled?
Click to expand...

Bottom line it is up to the Commanding Officer to make these determinations.

strehl said:
The "edit" function for posts doesn't work for me. I hit the "save changes" and nothing happens.
Also, how do you delete a post?
Click to expand...

Use a different browser. Firefox works best in this forum.
S

Obviously a solid missile hit will kill most planes, but what about cannon and small arms fire?

I remember that during testing, the USAF actual shot a F22 with 20mm(?) cannon round, and it survived the test just fine (although I couldn't find any details on just how much damage was sustained if anyone has a good source).

I wish to know, as much as it is possible with open source material, just how much of a risk ground fire poses to these multi-role jets?
Click to expand...

Great question, spurred likely by the A-10 reputation as a very robust A2G platform, and the A-10 is very heavily fortified, and has a fabulous gun! but, the A-10 is like a Christmas tree on radar, big square fuse, big square vertical stabs and big blocky wing and to add the whipped cream and cherry on top, two HUGE engine nacelles to house those beautiful jet engines???

Now the A-10 is low and slow, much like the Spad from Vietnam, the good old A1E was also a robust airframe, and operated low and sllllloooooooowwwwwwww!, yeah even an AK round in the right place would put you out of business, possibly for good!
Same for the A-10, but the A-10 can take a lot, but it only takes one lucky shot. For example, a friend now deceased, was shot down by the Sandanista's, flying down the beach in the worst Thunderstorm he had ever been in, barely able too see, and following the tree line for navigation, airplane started to run rough, he immediately added carb heat, thinking carb ice, but as he flared to land on the beach, he looked over to the tree line and about 30 Sandinistas, jumping up and down and celebrating!!!

Took him captive they did??? Yes, about 6 months in a South American prison, lots and lots of big bucks, involved of the Federal Govt who denied any prior knowledge and only provided the most perfunctory help, and later prosecuted him. ONE, count em 1 bullet, through the aircleaner, and into and through the carb, yep, I took the carb down and had to look for the bullet entry hole, he laughed and laughed, (Me) after about 5 minutes thinking, theres no bullet hole in this carb, but there was. (Me), it came right up the pipe, through the air-cleaner, and he laughed so hard he almost rolled in the floor.

So to answer your question with 100% accuracy is that there in NO way to predict with any accuracy what the ODDs are, about the same ODDs as surviving a drive by shooting, and the A-10 is vulnerable, because it has to be low to do what it does best?? any serious anti-aircraft is going to be deadly against the A-10, ditto the Harrier, prolly the same for the F-4, F-100, A-7E, or blah blah blah!

In contrast the F-35 with its sensor fusion, Low Observability, HIGH ALTITUDE, excellent OPTICAL, and other sighting, extreme stand-off range wiil not doub be very difficult to find and target, and a kill, well that is almost improbable, maybe unlikely???

but when you give up the high ground to go old school and get down in the dirt??? then and only then will it share the same very high risk, and it will be very capable down low, but you won't do that unless you buddy is down there and at risk.
Last edited: Jun 8, 2016
P

Strictly speaking this is not a military topic but still a security one. Trump's children will be the first adult US Presidential "kids" since George HW Bush was in office, and I think the first from multiple ex-wives of a US President. Several of Trump's children and in-laws will be managing an international business network with a fair amount of international travel to be expected. Since some or all of them qualify for Secret Service protection is this an unprecedented scope of work for the Secret Service?

Thought of this question when I saw this article about international Trump properties potentially becoming more attractive terrorist targets:

With two accidents in a short period, some has suggested Russia should "sink" its Admiral Kutnesov. Is there any possibility that Russia would lease Liao Ning to bomb IS?

SteelBird said:
With two accidents in a short period, some has suggested Russia should "sink" its Admiral Kutnesov. Is there any possibility that Russia would lease Liao Ning to bomb IS?
Click to expand...

ZERO! the Chinese wouldn't let the Russians near their boat with a 10 foot pole! NO WAY JOSE! besides the Russians aren't really fighting ISIS! their NOT! They are strictly targeting the Syrian Opposition Rebels who are trying to take out Assad, we know that, we are stupidly unhappy and lodging complaints all the way up to PUTIN, he don't give a rat's rear end what OBAMA and Team think, he's the Honey BADGER, he don't care!

If we wanted Assad out, we should have done the job, and protected our hand picked rebels, but Obama has NO STONES!

Putin's invasion of Ukraine should have been STOPPED DEAD! but BHO, he's just a big gasbag! the Russians know that, if Duterte can stand up to BHO, who could possibly be afraid of Obama?? NOBODY

Now, back to the Kuz, the Russians have no intention, nor capability to run a serious air op from the Kuz, or the Liaoning, it takes MONEY, and a Highly Trained, Highly motivated crew and Air Crew. Thank God the Russian drivers and Chopper boys are good at what they do! and they are, but apologies to my Russian friends, the rest of the team don't have the resources to get serious???

in the hands of North Korean soldiers, very similar to S. Korea's K-11. what is this? 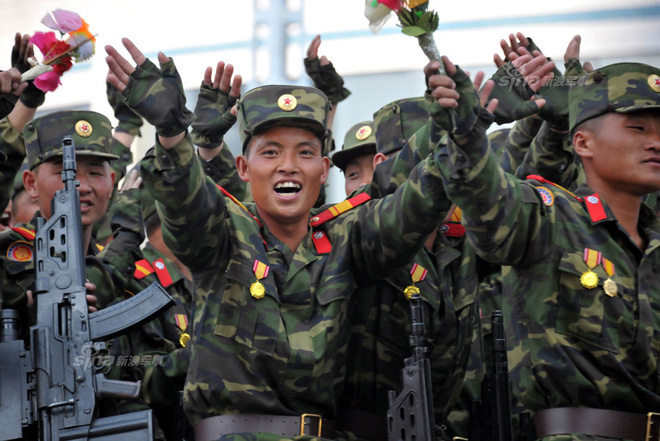 The lower portion is AK74 you can clearly see the fire selector on the side of the rifle.

This Smells. It smells a lot. Because if we believe it That have at least 45 units.

The way I see it there are only three possibilities
1) This is a fake that they took AK74 and put it in a fictional shell. This has been done before by Hollywood.

Like this one from Die another Day, Ironically this was "North Korea's New Tank Buster" in the film.
In reality it's a G36K that was mounted to a shell. Another movie did the same with a MP5

2) This is real but a as yet unseen export from another nation who aided the North Koreans.
5 Nations have the technology, The US and The Germans via ATK and H&K who built the XM29 and XM25 rifles, The French via the canceled PAPOP, The South Koreans or the Chinese.

It strongly resembles parts of both the QTS 11 and the K11. The US,Germany, France and South Korea would never sell to North Korea. The Chinese are more willing but this is not a QTS 11 converted to 5.45x39mm. The QTS11 is single shot, the carbine portion is the QBZ 03 and this is not a QBZ03 lower receiver, the handguard is wrong for QTS11.

SteelBird said:
in the hands of North Korean soldiers, very similar to S. Korea's K-11. what is this?

The Pistol Grip, fire selector/dust cover, Magazine, Muzzle device even visible gas tube all say AK74.
but there are problems that I think eliminate the possibility of a Airburst OICW.
first Air burst rounds are expensive. The Chinese 20x??mm and South koreans 20x30B are more numerous than the US 20x28 and later 25x40mm but you are likely still firing a round that costs more than the Average North Korean earns in a decade.
Although the system has a "Scope" It lacks any sort of secondary inputs. and when matching there is no reflection from inside the scope where one should expect lenses and close up shots don't seem like they have lense caps. They could but then again...
Additionally there is a lack of controls the XM29 and XM25, QST 11 and K11 all have buttons placed in convenient locations to program the rounds for firing. the US models place theirs on the trigger guard, the Chinese on the inside of the left hand side the South Koreas on the right side both for use by the support hand. the North Koreans? nothing. no evidence of a lasing or interface on the rifle other than the fire selector there also should be a switch or button to allow the soldier to fire the launcher not the carbine.
The Grenade launcher has a bolt lever but there looks to be no way for the rifle and scope to communicate. and it looks like the bolt would hit the scope.. The Rifle lacks the laser designator of the QST 11.
So 3) the Grenade launcher rounds could be "dumb" like the Neopup which fires HE or Incendiary or HESH or impact based. yet furthermore there is the "Barrel" it's small. Smaller than 20mm. this is not impossible
The Russians fooled around with a 12.7mm grenade launcher system mated to AK74 back in the 1970's the 80.002

yet the "magazine" is large. Also the magazine has an anomaly.
now a straight box style magazine is not impossible the Neopup used one until it was replaced by a Drum.

XM29 also used one but...
The North Korean grenade launcher is slanted backwards. the magazine angles back in a Rhombus shape. which is weird.
you dog leg or curve magazines if the rounds they fire stack in a curve if they are straight sided you use a straight box but the North Korean boxes are slanted. the problem here is Box magazines are like a Jack in the box. the follower of the magazine a folded plate like the head of the jack, on a spring that rides in the box. A spring likes to ride up straight up, it can curve it can compress diagonally but I have never seen one diagonally backwards.

frankly looking at the issues, the numbers, the economy lack of evidence of electronics, bold that seems like it would be blocked by it's own scope. an odd magazine that defies the norm...
my opinion is

A fake. They built a "Morita Mk III" style AK74. they took features from the QST 11 and K11
You must log in or register to reply here.