The Navy plans to perform an aerial refueling for the first time on its carrier-launched demonstrator drone aircraft, the X-47B, within the next few weeks, service officials said.

The refueling, to take place at Patuxent River Naval Air Station, Md., will have the X-47B link up with an Omega air refueling tanker, Navy officials told Military.com. Omega is a contractor that works with the Defense Department.

The X-47B made history when it flew from a carrier in May and November of 2013 and is now working on streamlining carrier deck operations and maneuvers with manned aircraft.

The Navy has launched and landed a carrier-based drone in rapid succession with an F/A-18 fighter jet as part of a series of joint manned and unmanned flight tests aboard the USS Theodore Roosevelt in August of last year off the coast of Norfolk, Va., service officials said.

After an eight minute flight, the X-47B executed an arrested landing, folded its wings and taxied out of the landing area before moving out of the way for an F/A-18 to land, Navy officials said.

Navy engineers worked on some slight modifications to the X-47B aircraft in order to allow it to both land and integrate in rapid succession with fixed-wing fighter jets.

The refueling will happen as the UCLASS program faces stiff criticism from prominent members of Congress who continue to push for a stealthy, long-endurance, penetrating strike platform.

An ongoing Pentagon intelligence, surveillance and reconnaissance, or ISR, review is currently exploring the range of desired capabilities for the Navy’s Unmanned Carrier Launched Aircraft Surveillance and Strike system, or UCLASS.

The thrust of the examination focuses on how stealthy the new first-of-its kind carrier-launched drone needs to be, how much of a weapons payload it will be configured to carry and deliver and how far it will be engineered to fly with and without aerial refueling.

The Navy had planned to launch a competition among vendors to build the UCLASS through the release of what’s called a Request For Proposal, or RFP this past summer. However, concerns from lawmakers, analysts and some Pentagon leaders wound up resulting in a substantial delay for the competition in order to allow time for a formal review of needed requirements for the platform.

Deputy Defense Secretary Bob Work said the ongoing review is making progress but the Pentagon and Navy are still not ready to move forward yet with a formal proposal.

“We decided this year we were almost ready to launch the RFP, but we decided we need to take a pause because we want to consider the UCLASS as part of the joint family of unmanned surveillance strike systems and make sure that we’re going after the right capabilities,” Work said at a recent speech at the U.S. Naval Institute.

Work was likely referring to the manner in which every major platform or weapons system needs to be integrated with other services in order to operate properly in a joint combat environment, said Loren Thompson, vice president of the Lexington Institute, a Virginia-based think tank.

Aerial refueling technology is central to the debates about UCLASS because larger fuel tanks affect the size, shape and contours of the body of the aircraft and affect its stealth properties by changing the radar cross-section of the aircraft.

Some design proposals for UCLASS would make the drone less stealthy and less able to carry a larger weapons payload – yet be able to travel very long distances as an ISR platform. Other proposals focus more on stealth and weapons payload.

If UCLASS were designed for maximum stealth and weapons-carrying potential from its inception, engineers would most likely envision an aircraft with a comparatively smaller tank in order to lower the radar cross-section of the aircraft. A differently-configured fuel tank might result in the need for more aerial refueling as a way to extend the aircraft’s range and ensure long-endurance ISR, analysts have explained.

The ongoing uncertainty and disagreements about UCLASS requirements could mean that the platform might wind up getting cancelled if sequestration returns in 2016, Thompson added.
Click to expand...

VIP Professional
All the catapult speak is tiresome... good thing for some of you fellows popeye is retired from being a mod otherwise some of you would get a short vacation for caring on a useless argument.

All I know in my heart of hearts is that the US Navy, engineers & technicians etc.., persons responsible for getting those catapults to work properly and nearly flawlessly on CVN-78 will do so..sooner than later.

The Thread about the entire NBuild pon SD is:

One day it will be GREAT to see Gripens operating off of her...and off of a future, new Brazilian carrier.

Popeye, this is an old French design (Clemenceau class) from the late 1950s. What Class US carrier does it remind you of?

Defense Undersecretary Frank Kendall, who heads a joint U.S.-India defense trade and technology effort, said he was optimistic about the two countries' efforts to cooperate on a planned aircraft carrier for India.

"I'm optimistic about cooperating with them on that," Kendall told Reuters in an interview, when asked about the possibility of India acquiring the Electromagnetic Aircraft Launch System (EMALS) built by privately held General Atomics, which is based in San Diego, California.

"They’re going to have to make their own decision about what technology they want, but I don't see any fundamental obstacles to them acquiring some of our carrier technologies, if they want them," he said.

India wants to use state-of-the-art U.S. technology to boost the range and potency of a planned aircraft carrier, in a move that would deepen cooperation between both countries and counter China's military influence in the region.

The new system helps jets launch off a flat deck at a faster rate and with less fatigue to the aircraft.

Kendall said the issue would be addressed by a new working group that is being set up by the two countries.

Moore will work with his Indian counterpart, Rear Admiral-select Surendra Ahuja, a former Indian test pilot, to set up the first meeting of the group in the next couple of months.
Click to expand... 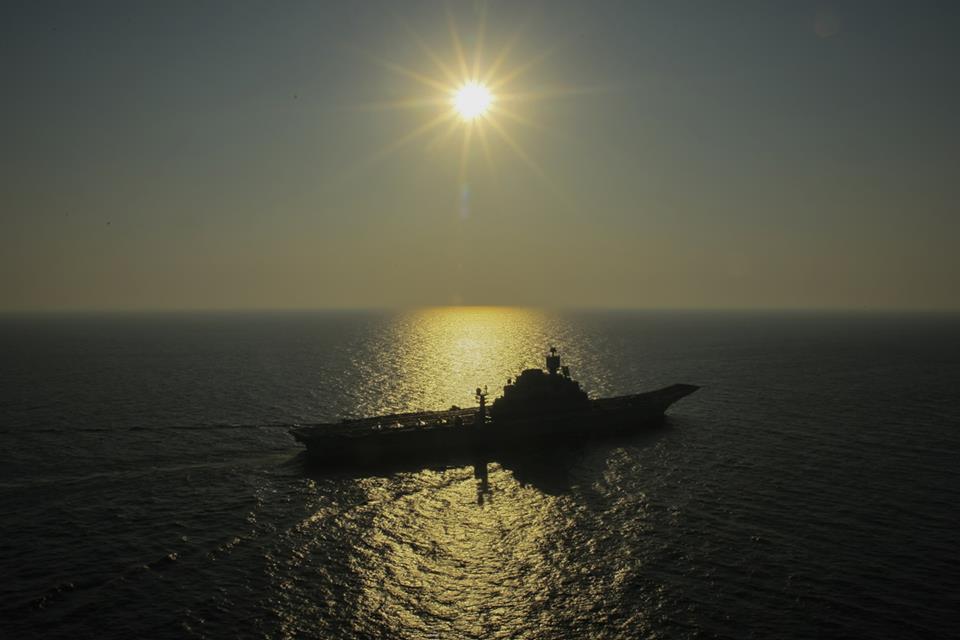 Izumo in the water and Hyuga in the dry dock

​
This is a GREAT pic because it gives you a very good idea of the relative sizes of the two.

Of course Izumo has now gone through its trials and been commissioned since this was taken...but the size comparison is good anyway.

FCT, ran by the Navy’s Board of Inspection and Survey (INSURV), is part of a series of post-delivery tests the ship has been preparing for since before commissioning. During the trials, the ship and its major systems are exercised, tested and corrected as required.

After successfully completing FCTs, the ship will head into a maintenance period known as post shakedown availability (PSA) beginning late Spring. During this time the discrepancies that were noted will be resolved.

America is the first ship of its class, replacing the Tarawa class of amphibious assault ships, and is optimized for Marine Corps aviation.
Click to expand...

After this, although the Navy may (and probably will) continue to get help from the builder, it will be on the Navy's nickel.