texx1 said:
Ref was actually lenient on Brazil. The Dutch penalty kick at 2 mins was a pro Brazil decision. It should have been a freekick just outside the penalty area and a red card for Thiago Silva, as he committed an offence that denied Robben an obvious goal-scoring opportunity. If that had happened, Brazil would have to play almost the entire match with 10 men. In that case, Brazil could have conceited more goals than just 3 since their defense was already terrible to begin with.

Me Bad. I cringed when I saw it and was thinking to myself about turning the TV off if Brazil got reduced to ten men as soon. I think the ref might have been thinking of the "big picture" and not ruin it for the paying public and all the TV audience around the world when he chose not to send Thiago off. After all the Dutch coach publically said what most teams would have been thinking in that it wasn't an important fixture and so on.
Last edited: Jul 13, 2014
A

Equation said:
First, congrats to Germany on your WC victory. Second, no shame to the Argentine team for they gotten this far and played a good game against a really tough team. And finally, thank you to Brazil for being such a great host nation for the event. It's fun to watch all the new and revised stadiums all around Brazil at cities that I've never heard of before till now. Up next, Russia's turn to host the 2018 WC.
Click to expand...

These words alone earned my respect my friend. Double thumbs up bud!
A

siegecrossbow said:
Great win by Germany! Argentina put up a heck of a fight and had many opportunities to score, however. Sad to see how disappointed they were after Germany made the goal 5 minutes before they went into the "shoot-offs".

On the other hand I am very impressed with Germany's pass/score coordination. Almost as if they could communicate telepathically.
Click to expand...

Agreed. This is why I am a German fan. I started watching FIFA in 2006 by following Zidane because I've heard he was phenomenal. After he's gone, I had an identity crisis and I was told Germany is a solid team that has excellent teamwork and coordination. So I gave them a try, and loved this team ever since. Their teamwork, brotherhood, organization, professionalism, sportsmanship is more than respectable; they are an example for others to learn from. If you watch their passes, you will notice they usually pass it to the guy's foot, whereas other teams may have their teammates running after the ball. Finally, if you look at how they generally pass the ball to their teammates or whoever's in the best position, it shows they care less about who gets it in and rather it's all for the team. Even after the wins they are still humble. This is why I loved them.

Nonetheless, Argentina really learned from their 4-0 humiliation in 2010 and did very well defending(hence there are barely any Germans in the middle). I am very impressed by their defence, although unimpressed by some specific players' continuous roughness. How can Schwensteiger get so beaten up it looks like he's at a pub brawl?

Supporting the strongest team makes life a whole lot easier; they have earned their place there. It's good for your testosterone, mood and everything. That's what I do, in some sports.

This World Cup was one of the best I can remember. 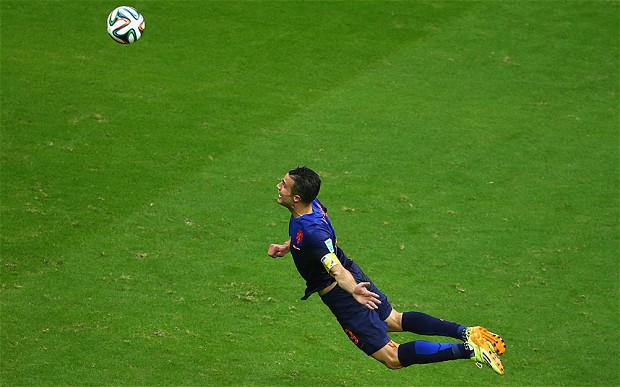 Brazil v Chile: It was only in the last 16 and it may not have had the traumatic, historic resonance of Brazil’s semi-final loss to Germany or the controversy of their quarter-final win over Colombia but for the intensity of the occasion and the excitement of the match then it has to be Brazil’s penalty shoot out victory against Chile.
The atmosphere inside the Estadio Mineirao was quite extraordinary, the decibel levels unprecedented as the fans chanted “Acredito” (I believe) amid scenes that were almost primal. There were tears from Brazil goalkeeper Julio César before the penalty shoot-out while the bravery of Chile’s brilliant, attacking football was incredible.

WORST GAME
Costa Rica v England: This was the dullest of dead rubbers, although it should not have been. England were out of the World Cup after they followed a performance full of positivity against Italy with one full of poverty against Uruguay – and then they served up this dross. It was an embarrassment, given this was a World Cup: shamefully, it looked like England could not get out of Brazil quickly enough.

Brazil v Germany: This was car-crash viewing; a party that turned into a wake. It was painful to watch, an exercise in national panic that will resonate through the decades. Having reached the semi finals it was felt that the Seleçao had avoided embarrassment at their own World Cup. How wrong we were. Brazil were a shambles, the foolishness of their maudlin approach to the injured Neymar, the folly of Luiz Felipe Scolari constantly playing on the emotions of a nation and the limitations of his team cruelly exposed by German brilliance.

BEST COACH
Louis van Gaal: There have been some outstanding candidates: Germany’s Joachim Löw, Chile’s Jorge Sampaoli and Costa Rica’s Jorge Pinto all had brilliant tournaments and exposed the folly of the argument that international management is not about coaching or developing tactical plans and simply boils down to man management. But for fun and variety and a bit of devilment, it has to be Van Gaal, who became a compelling figure for his tactics, boldness and arrogance in leading a limited Dutch squad to the semi-finals. 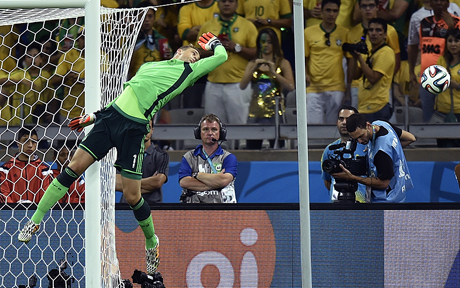 Manuel Neuer: Guillermo Ochoa for Mexico, Tim Howard for the USA and Sergio Romero for Argentina were all exemplary but it has to be Neuer, who cemented his status as the world’s best with a series of formidable displays for Germany. Neuer has everything – agility, power, presence – and is the ultimate modern goalkeeper with his distribution, ability to play with his feet and being a ‘sweeper-keeper’. 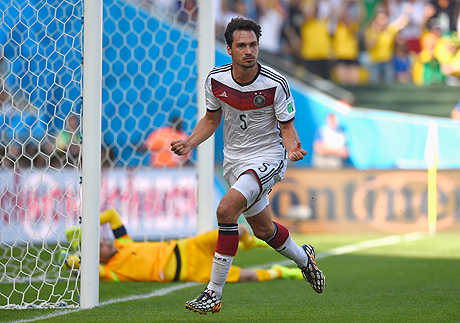 Mats Hummels: In such an attacking World Cup the defending, at times, has been poor. There have been few impressive defenders, especially in the centre, and even fewer who appear able to back themselves in a one against-one situation. Of the recognised top defenders Hummels has been the most impressive.

BEST MIDFIELDER
Toni Kroos: Aged 24, the German is now very much the complete midfield player who can hold and attack, pass and shoot and boasts significant physical presence. He has been brilliant in a formidable German line-up in front of Bastian Schweinsteiger and Sami Khedira. Honourable mentions, though, should go to France’s Paul Pogba, Andrea Pirlo (wonderful against England), Javier Mascherano, Chile’s Charles Aranguiz and Arturo Vidal. There was also Colombia’s outstanding James Rodríguez, although he is more a No 10. 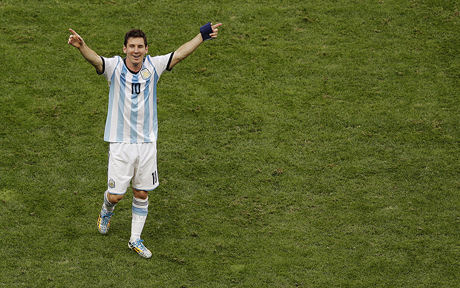 Lionel Messi: There have been some great performances and not least from Arsenal’s new £30  million striker Alexis Sánchez, Holland’s Arjen Robben, Germany’s Thomas Müller and, of course, Brazil’s Neymar. Ultimately, however, it has to be Messi. The captain of Argentina has not been at his irrepressible best but there is an aura about him that has not only affected opponents but, at times, has almost intimidated his team-mates. He has a presence, a tranquillity and the confidence to know that he will make a difference.

BEST INDIVIDUAL DISPLAY
[video=youtube;AONtS4iHeNY]http://www.youtube.com/watch?feature=player_embedded&v=AONtS4iHeNY[/video]
Neymar (v Croatia): Having fallen behind and laboured in Sao Paulo it could have turned ugly for the hosts until the boy wonder striker intervened. He scored twice but it was more the way that he assumed the role as his country’s saviour that was so remarkable.
Click to expand...

TOP THREE GOALS
[video=youtube;gy4xaplttp0]http://www.youtube.com/watch?feature=player_embedded&v=gy4xaplttp0[/video]
1. Robin van Persie’s diving header against Spain where he controlled his body and arched his back to lob the goalkeeper with a header.
[video=youtube;iGPZf_aF82M]http://www.youtube.com/watch?v=iGPZf_aF82M&feature=player_embedded[/video]
2. James Rodríguez’s remarkable, exuberant strike against Uruguay in which he even took time to check the position of the goalkeeper before volleying in from outside the penalty area
3. Chile’s team goal against Spain in the group stages, in which they stole possession and wonderfully worked an opening for Eduardo Vargas.

WORST TEAM
Russia: Once again, following his traumatic experience with England in South Africa in 2010, this was another high-profile, crushing failure for the highly paid Fabio Capello, whose team were simply deathly. The World Cup has now been a triple disaster for Capello – once as a player with Italy in 1974 and twice now as a coach – which makes it all the more intriguing that he will be in charge when Russia host in 2018.


MOST OVER-HYPED TEAM
Belgium: They reached the quarter-finals, but these most obvious of dark horses never amounted to the sum of their parts. Apart from the last-16 encounter with the USA they never cut loose and showed their undoubted talent. Coach Marc Wilmots cut a sour figure who simply did not appear to know his best team or how to get the best out of his squad.


BEST FANS
Chile: They stormed the media centre at the Maracana, got on the red wine at 10am and did not relent. Their songs, their singing of the national anthem, the way they embraced coach Jorge Sampaoli’s declaration that they were the “rebels” of the World Cup... it was all raucous and fun and slightly chaotic. They were run close by the hordes from Mexico, while respect is also due to the litter-clearing Japanese.

BIGGEST SURPRISE
Spain: Not that they did not qualify from their group but just how meekly they capitulated. This was a disastrous defence from the world champions: there was a sense beforehand that many of their best players started the tournament past their peak, but they nevertheless had a squad that was brimming with talent and also some exciting young players.

BEST STADIUM
Brasilia: Belo Horizonte had atmosphere, the Maracana had grandeur but in terms of overall effect the Estadio Nacional was a favourite. The stadium has the vertiginous swoop of Real Madrid’s Bernabéu while from the outside there is the unmistakable imprint of architect Oscar Niemeyer, like so many buildings in the country’s capital, one of the strangest cities in Brazil.

MOST SURREAL SIGHT
It has to be the empty streets of Sao Paulo when Brazil played. Given the chronic congestion that is omnipresent in this vast city then it was quite something to witness its street free of cars. Even at 4am Sao Paulo has traffic jams and the shortest of journeys can take three hours. But when Brazil played it was a ghost town, with people packed in bars and around TV screens rigged up in streets.

THE BEST THING ABOUT BRAZIL WAS...
Brazil. They made it their World Cup. My fear was that, as in South Africa, it would simply be a Fifa World Cup and the location could be anywhere; instead, Brazil have given this tournament their own imprint. It may have been owned by Fifa but it was embraced and given an identity by Brazil.
Click to expand...

Thank you Brazil for a Great World Cup!!!!

Thank you so much!
You must log in or register to reply here.