Sea Waves said:
The Navy concluded another round of carrier testing Nov. 19 to further demonstrate and evaluate the X-47B unmanned air system integration within the aircraft carrier environment.

“The X-47 was tested in winds of higher magnitude and differing directions than seen in previous detachments,” said Program Manager for Unmanned Carrier Aviation Capt. Beau Duarte. “This resulted in more stimulus provided to the aircraft’s guidance and control algorithms and a more robust verification of its GPS autoland capability.”

This test phase, which began Nov. 9, also provided an opportunity for the second X-47B to make an appearance, marking the first time both aircraft appeared together in a carrier environment.

Over the flight test period, the X-47Bs performed 26 total deck touchdowns: 21 precise touch-and-goes and five arrested landings; as well as five catapults, five commanded and two autonomous wave-offs. While one X-47B operated in the vicinity of CVN 71, the second air vehicle conducted flight operations between ship and shore. Both X-47Bs are assigned to Air Test and Evaluation Squadron (VX) 23 at Naval Air Station Patuxent River.

The Navy will operate the X-47B throughout FY14 to conduct further land and carrier based testing to mature unmanned technologies and refine concept of operations to further inform future unmanned carrier requirements.

This is very good stuff. For the first time both aircraft were used t once, and they ar enow testing them at more adverse climatic conditions.

The Navy's unmanned X-47B returned to carrier operations aboard USS Theodore Roosevelt (CVN 71) Aug. 17 and completed a series of tests, operating safely and seamlessly with manned aircraft. Building on lessons learned from its first test period aboard TR in November 2013, the X-47B team is now focused on perfecting deck operations and performing maneuvers with manned aircraft in the flight pattern.

"Today we showed that the X-47B could take off, land and fly in the carrier pattern with manned aircraft while maintaining normal flight deck operations," said Capt. Beau Duarte, program manager for the Navy's Unmanned Carrier Aviation office. "This is key for the future Carrier Air Wing."

The first series of manned/unmanned operations began this morning when the ship launched an F/A-18 and an X-47B. After an eight-minute flight, the X-47B executed an arrested landing, folded its wings and taxied out of the landing area. The deck-based operator used newly developed deck handling control to manually move the aircraft out of the way of other aircraft, allowing the F/A-18 to touch down close behind the X-47B's recovery.

This cooperative launch and recovery sequence will be repeated multiple times over the course of the planned test periods. The X-47B performed multiple arrested landings, catapults, flight deck taxiing and deck refueling operations.
Click to expand...

We will see these flying seed and advanced mission, controlled by F-35Cs, and doing long range anti-area denial missions to clear the way for the heavy hitters. 15-20 years ahead of opposition...like the Zumwalts, rail-guns, lasers, etc.Now, the US just has to have the will to use them when needed.
Last edited: Aug 18, 2014

We will see these flying seed and advanced mission, controlled by F-35Cs, and doing long range anti-area denial missions to clear the way for the heavy hitters. 15-20 years ahead of opposition...like the Zumwalts, rail-guns, lasers, etc.Now, the US just has to have the will to use them when needed.
Click to expand...

and that's the way the big boys "do it", what do the hillbilly's say??? Git ER DONE!

Air Force Brat said:
and that's the way the big boys "do it", what do the hillbilly's say??? Git ER DONE!
Click to expand...

The capability of the 5th generation F-35s to control cooperative engagement of these aircraft and function as a local AEW&C for them and other aircraft, will be huge.

The US is in the process of accomplishing a real paradigm shift right before our eyes.

VIP Professional
Only ONE Navy on this Earth can do what these photos depict.... The United States Navy! No brag, just fact. 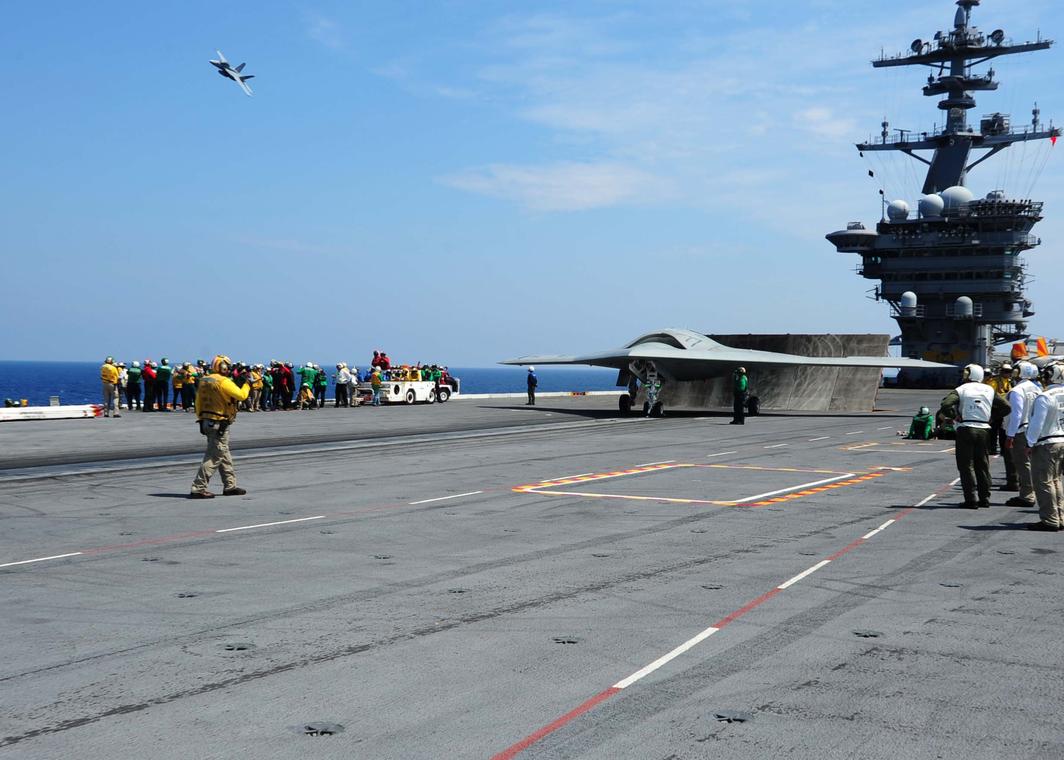 Equation said:
See that F/A -18 on the corner over there on the fly by? Looks like "Maverick" (possible TOP GUN II movie scenario) is taking a closer look at his new Wing Man (X-47B).
Click to expand...

He's doing what is known as a carrier break. Which is a flight pattern used before an aircraft lands. The aircraft flies on the starboard (right side) of the ship at about 1000-1500 feet altitude and as it approaches the bow the aircraft "breaks" to port (left) to go around the ship to get in the landing pattern.

Staff member
Super Moderator
Registered Member
I'm not sure if this chatter is indicative of UCLASS's future or if it is just typical observer skepticism... But what cannot be denied, is that the requirements for UCLASS seem to have been scaled back from its initial premise.

August 20, 2014
UCLASS: Unmanned or Just Unmanageable?
UCLASS Was the Answer to A2/AD. Then Came the Price Tag

Although the Department of Defense has established high hurdles for initiating new weapons programs, every once in a while an effort slips through the process that seems doomed to failure from the start. The Navy’s Unmanned Carrier-Launched Airborne Surveillance and Strike (UCLASS) system is such a program.

Originally, UCLASS was supposed to be a stealthy, long-range system with aerial-refueling capability that could accomplish combat missions in contested airspace far from the carriers hosting it. Then the Navy saw the price-tag. So now it has become mainly a surveillance drone that might or might not have aerial refueling capability, and that might or might not be able to operate in contested air space.

When you see this kind of instability in a new program, it’s a tip-off that the effort is going to run into trouble during development. The Navy has decided to keep its draft request for proposals secret from everybody except the four industry teams competing to win a development contract. But just by listening to what the service says in public about the program, you get the feeling it isn’t ready for prime-time.

At least, that’s the feeling Congress seems to be getting. Senate appropriators have drafted language saying that no final solicitation to industry should be made until performance requirements stabilize and are blessed by the Pentagon’s top review panel. House authorizers have issued a report complaining UCLASS as currently described doesn’t add much to fleet capabilities.

So why is the sea service seeking $400 million in the fiscal year beginning October 1 to commence development of such a shaky idea? To answer that question, you have to go back to the dawn of the new millennium, when the Bush dministration was propounding the notion of “military transformation” driven by emerging technologies. One of the technologies the Navy latched onto at the time was unmanned aircraft — drones — that had the potential to stay airborne far longer than manned aircraft. That was a smart choice, up to a point: a decade of research on unmanned-aircraft concepts eventually led to the land-based, very-long-range MQ-4C Triton and the sea-based, vertical-ascent MQ-8B Fire Scout, systems that will greatly enhance the situational awareness of warfighters.

But unmanned systems have important limitations, particularly when operated from the crowded and inherently dangerous decks of aircraft carriers. There needs to be a compelling reason for putting them there. Thus far, no such rationale has materialized for UCLASS. The Navy already possesses abundant surveillance and strike assets, which are bolstered by the capabilities of other services (most notably the Air Force). So spending billions of dollars on an ill-defined program just to have a carrier-based drone is a dubious proposition — especially when the service says it is challenged to fund its next-generation replacement of Ohio-class ballistic missile submarines, arguably the most important modernization effort in the entire joint inventory.

The Navy might be able to craft a more convincing case for UCLASS if it were closely linked to defeating the “anti-access, area denial” strategies of countries like China. But leading think tanks and legislators such as Rep. Randy Forbes (a genuine expert on maritime affairs) say UCLASS as currently conceived can’t do that. In fact, no sea-based drone can if the acquisition strategy begins with affordability. To extend the reach of carrier-based aviation into contested areas, manned and unmanned aircraft alike need things like stealth, situational awareness and aerial refueling — items that inevitably drive up costs.

According to Sydney Freedberg of the widely-read Breaking Defense web-site, the Pentagon’s top acquisition officials will meet September 10 to determine whether UCLASS is sufficiently mature to move forward. Chances are they won’t like what they see. They will quiz the Navy on whether UCLASS is really needed given its scaled-back performance features, and they won’t be impressed if program managers say they have the option of adding stealth or payload or refueling capability later. In the current fiscal environment, there simply isn’t enough money to develop every “nice-to-have” program. There has to be a clearly articulated need, and a convincing solution. UCLASS, at least as it exists today, may not be able to meet that standard.

Loren B. Thompson is Chief Operating Officer of the non-profit Lexington Institute and Chief Executive Officer of Source Associates, a for-profit consultancy.

This article originally appeared on the Early Warning Blog, a publication of the Lexington Institute.

I'm not sure if this chatter is indicative of UCLASS's future or if it is just typical observer skepticism... But what cannot be denied, is that the requirements for UCLASS seem to have been scaled back from its initial premise.
Click to expand...

This is just an op-ed piece that has no influence on the final design of the UCLASS. And much of the US military defense budget is being scaled back now a days.
You must log in or register to reply here.