"Program “wholeness” became something of a buzzword in the Pentagon after Defense Secretary James Mattis released a memo in January 2017 that stated a Fiscal Year 2017 supplemental budget would focus on “warfighting readiness” and then the FY 2018 budget request would “achieve program balance.” “Building capacity” would then take place in FY 2019 and beyond, according to the memo."
I see
Navy Adds ‘Wholeness Balance Reviews’ to Budget Process to Consider Total Ownership Costs
Please, Log in or Register to view URLs content!

The Navy is focusing on total ownership costs and program wholeness in its future budget submissions, ensuring that resource sponsors and program managers have considered costs like training and sustainment from the beginning.

Rear Adm. Jim Kilby, director of warfare integration on the chief of naval operations’ staff (OPNAV N9I), told USNI News that starting with the Program Objective Memorandum for the 2020 budget the Navy had implemented a “wholeness balance review” process.

“It’s part of the POM process. The entering argument now is, let’s talk about your program from a wholeness perspective before we just put it in the mosh pit with everything else,” Kilby told USNI News after participating in a panel discussion at last week’s Surface Navy Association annual symposium.
“So that part of POM [2020] has happened, we’ve taken program wholeness balance reviews from everybody. Then there’ll be a readiness piece about additional readiness investments we may need to make, and then an investment piece is what I’m in charge of to go look at capability. And then there will be an integration phase at the end where we weigh all those values out and use evaluation criteria vice just ‘hey I think’ or ‘my gut tells me’ to try to come up with the best program.”

Beginning in December, one- and two-star officers have participated in the wholeness balance reviews and can move money around to address holes in the program – for training, for maintenance, for interoperability with other programs – within a certain dollar amount. Wholeness gaps greater than that dollar amount are forwarded on to the Navy’s corporate board to decide how to proceed.

Program “wholeness” became something of a buzzword in the Pentagon after Defense Secretary James Mattis released a memo in January 2017 that stated a Fiscal Year 2017 supplemental budget would focus on “warfighting readiness” and then the FY 2018 budget request would “achieve program balance.” “Building capacity” would then take place in FY 2019 and beyond, according to the memo.

Of course wholeness cannot be addressed in a single budget cycle, and Kilby said the Navy would continue with these wholeness balance reviews going forward to provide “the right introspection and honest visibility” to how much money it actually takes to make a program whole and able to succeed in the future.

it's the SDF here so let's face it

he Trump Administration’s first National Defense Strategy is a vigorously and well written document that marks a major shift from the policies of the Obama and Bush Administrations, calling
Please, Log in or Register to view URLs content!
the “central challenge” to the United States.

The strategy reserves
Please, Log in or Register to view URLs content!
, accusing it of wielding predatory economics in combination with building its fake islands in the South China Sea to intimidate neighboring countries.

The rapid movement of commercial technologies to the military sphere is changing the basis of war, it says. Developing
Please, Log in or Register to view URLs content!
that Breaking D readers are very familiar with — advanced computing, artificial intelligence, autonomy, hypersonics and biotechnology — should help the United States counter that trend.

One of the most intriguing elements in the new strategy is its idea that the US should be strategically predictable but operationally unpredictable. That sounds as if Defense Secretary Jim Mattis wants to make President Trump’s personality an asset, given his unpredictability. But there’s also a firm commitment to something that has persisted since the end of World War II: the key role our allies have played in helping the US maintain the international liberal political order.

In language sure to delight our allies, about two pages of the summary highlight just how important alliances are to the United States as it faces this increasingly uncertain world, saying they are crucial. It even says multilateral organizations (the United Nations!) and NGOs provide additional means of bolstering US interests, in addition to those countries who are our allies and partners.

It’s worth remembering that the National Defense Strategy is not just a policy document. It also occupies an important place in the Pentagon’s budget process known as Planning, Programming, Budgeting, and Execution (PPBE). Its policy statements drive how much is spent on what. Most of the NDS is classified this year. What the public is seeing is a summary of the document.


Please, Log in or Register to view URLs content!
told reporters on Tuesday he hoped the Trump administration would offer a strategy from which its 2019 budget would flow. (For how many years have we heard Pentagon officials bemoaning the lack of strategic guidance and grinding their teeth over budgetary salami slicing!).

A firing prototype was shown last year at AUSA

note MLOK slots.
He points out that Abrams is 40 years old as a system and that since it came into service there has been no major replacement compared to the 40 years before it which would have been like going from the M4 Sherman to M1 Abrams Skipping the Patton Series.

and there's a countdown timer on top of us.cnn.com now, showing ... 12 hours 10 minutes

yeah I read that type of stuff from BreakingDefense Wednesday at 9:52 PM

During Friday morning’s rollout of his new National Defense Strategy, Defense Secretary James Mattis summed up the document succinctly. “Everything we do must contribute to the lethality of our military. We cannot expect success fighting tomorrow’s conflicts with yesterday’s weapons or equipment.”

Since taking over the helm at the Pentagon a year ago, Mattis has time and again used a single word, “lethality,” to describe his vision for how to move the armed forces forward to meet the challenges of a new era of great power competition. The new strategy reflects that vision, while putting the nation’s defense apparatus on what amounts to war footing.

Speaking to reporters at the Pentagon on Thursday, one of the key architects of the new strategy warned against thinking of the document as a “pivot.” The United States is not moving away from any one fight and toward new ones. Rather, said Elbridge Colby, the Pentagon’s deputy assistant secretary for strategy and force development, the idea is that military leadership is focusing on accelerating programs and ideas that languished in old strategies and were never implemented, and is pushing the defense industry and a calcified acquisition system to develop – and field – cutting-edge technologies.

The document says the United States must quickly move past “a period of strategic atrophy” in which Washington focused more on regional threats than great power competition.

The issue of the Pentagon’s eroding military advantages over adversaries is a major thrust of the paper. The unclassified 11-page version of the larger 40-page document doesn’t go into detail about specific technologies, but it is clear that the Pentagon is preparing to move out quickly to shore up advantages against the growing Chinese military capabilities in the South China Sea.

Listening to Mattis and other military officials over the past year, it has been clear that while U.S. troops are still in the fight against terrorist groups in Afghanistan, Iraq, and Syria, their real concerns are the military advances being made by China and Russia, along with the ballistic missile and nuclear threats posed by North Korea and Iran.

The new strategy underlines that concern and hammers it home. “Inter-state strategic competition, not terrorism, is now the primary concern in U.S. national security,” according to the report.

It also makes perfectly clear who is driving that competition, and where. The document paints China as a true global power, with the economic might to coerce and compel neighbors and trading partners to bend to its will, while Russian influence is more limited, according to the document.

Militarily, “China is not as overtly brazen,” Colby said. Moscow has invaded both Georgia and Ukraine in recent years, and continues to wage a low-level war in eastern Ukraine while propping up the Assad regime in Syria. The Chinese are expanding their influence in a different way, “but it is militarizing the South China Sea and has embarked on a military modernization program that is in deep contravention to our interests,” Colby added.

Russia, however, “is operating from a much more limited base. There’s a limitation of economic resources and power.”

The strategy also recognizes that the militaries of other nations are making rapid use of commercial technologies, while the Pentagon is mired in a slow-moving, cumbersome, Cold War-era acquisition system.

To maintain the American advantage, “will require changes to industry culture, investment sources, and protection across the National Security Innovation Base,” according to the paper.

The paper lays out three lines of effort to maintain the eroding ability of the United States to overwhelm its adversaries. The first is “rebuilding military readiness,” something that the 2018 Pentagon budget has attempted to do. Second is “strengthening alliances as we attract new partners,” and third, “reforming the department’s business practices.”

One way to deter potential adversaries is to build and maintain a robust alliance network, albeit one that share costs, an obvious nod to President Donald Trump’s demand that long-standing friends spend more on defense.

“We do need more equitable relationships” with allies, said Colby, who led the team writing the document. He added that the strategy aims to show allies two things: “we’re here to stay,” but “there’s a practical reality that we need to be able to do things together, be more interoperable, and divide up missions.”

Much of this thinking has been telegraphed by military leaders over the past several months. Speaking at a conference in India this past week, Adm. Harry Harris, head of the U.S. Pacific Command, said that the United States “must be willing to take the tough decisions to ensure the Indo-Pacific region and the Indian Ocean remain free, open and prosperous. This requires like-minded nations to develop capacities, leverage each other’s capabilities.”

As Mattis has said, the basics of the new strategy are nothing new. Rather, the Pentagon is looking to move past its fixation with combating shadowy terrorist groups and recognize that America’s traditional military advantages against other nation-states is eroding.

And when it comes to reversing course, Colby said, “we have to get back to the basics of preparing for war.”
Click to expand...

EDIT
Summary of the
National Defense Strategy
of
The United States of America
Please, Log in or Register to view URLs content!
Last edited: Jan 19, 2018

believe in the best,
prepare for the ... shutdown: 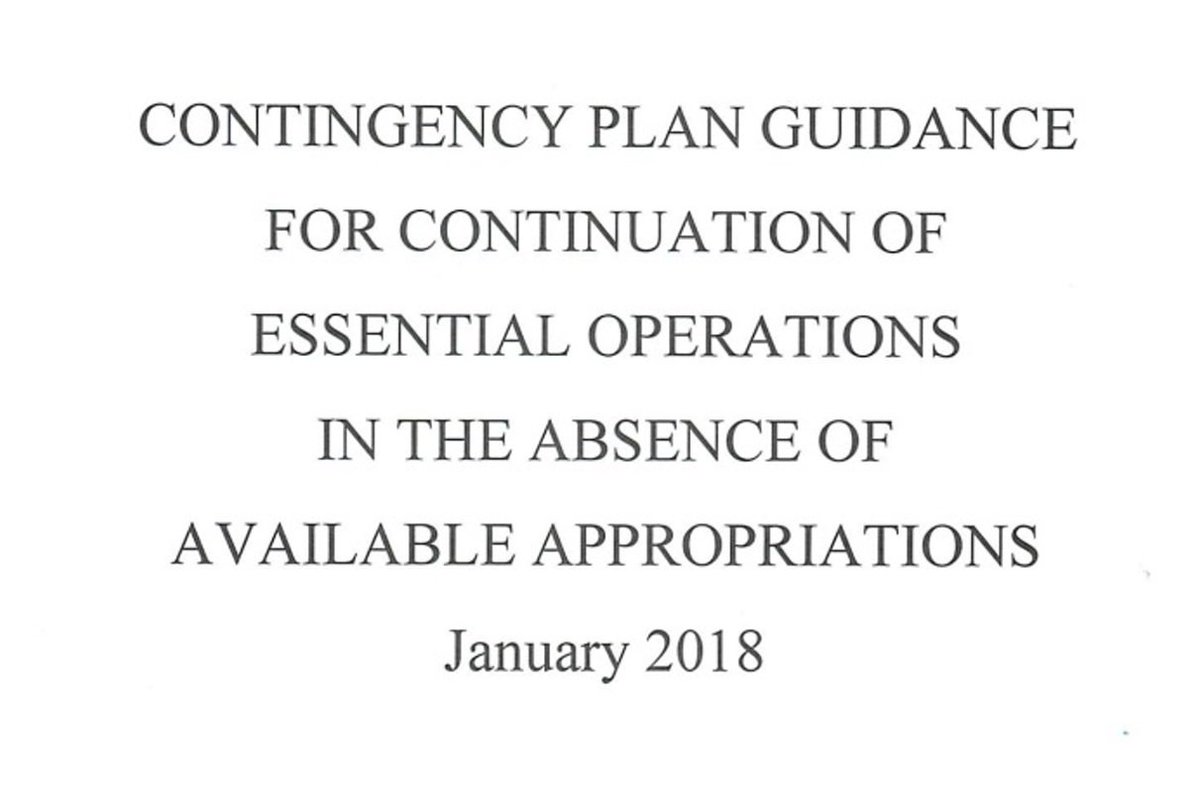 "... Whether the military will have that much money to spend is still up for debate. The authorization bill sets policy priorities and spending parameters for military funding for fiscal 2018, but appropriators still must allot the money to the Defense Department before they can move ahead.

That process is expected to take several more weeks. ..."

... so I quote it;
Government headed for shutdown Saturday, after Senate fails to pass budget bill
Please, Log in or Register to view URLs content!