Naval Today said:
The U.S. Navy announced that it has successfully completed the longest range anti-air warfare intercept in Navy history which took place at the Point Mugu test range in California, on September 22.

The navy, however, did not specify the length of the intercept.

The navy added that this was not the first time that SM-6 has shattered its own distance record. The missile broke the previous long-range intercept record in January of this year onboard USS John Paul Jones at Pacific Missile Range Facility, a milestone it originally set in June of 2014.

According to the navy, this NIFC-CA test was the tenth consecutive successful live-fire test to demonstrate an over-the- horizon, engage-on-remote capability. This particular test also successfully validated the NIFC-CA from the sea kill chain concept.

NIFC-CA From The Sea is a program of record which uses four pillar programs to act as a kill chain for the surface fleet: Aegis Baseline 9.0, Cooperative Engagement Capability, E2D Hawkeye and SM-6.

SM-6 provides U.S. Navy ships with extended-range protection against fixed- and rotary-wing aircraft, unmanned aerial vehicles and anti-ship cruise missiles and ballistic missiles in the terminal phase of flight. The active radar and extended range of the SM-6 allow it to track and destroy over the horizon targets which are out of sight of operators on deck.

Aegis Baseline 9 delivers a fully open architecture system on U.S. cruisers and destroyers and is the basis for current and future Aegis integrated air and missile defense. Baseline 9 is being fielded on in-service destroyers, new construction destroyers and Aegis Ashore. The Aegis common source library-enabled derivatives are on Freedom-variant littoral combat ships and will be included on the upcoming frigate ship.
Click to expand...

According to Lockheed Martin, the company responsible for integration and testing, the test proved the missile’s ability to load mission data using the modified tactical tomahawk weapon control system (TTWCS+) and align mission data with the moving ship and launch from the MK 41 Vertical Launch System (VLS).

During the test, LRASM exited the VLS launcher, cleanly separated from its Mk-114 booster and transitioned to the cruise phase. The missile successfully flew a pre-planned low-altitude profile collecting aerodynamics agility data while enroute to its pre-determined endpoint.

Lockheed Martin said the company invested internal funds to support this test and provide an operational LRASM and to refurbish the Navy’s Self Defense Test Ship MK 41 VLS. This demonstration from a moving ship in a dynamic at-sea environment was a critical step in proving the maturity of the surface-launch variant.

LRASM was also tested successfully from a ground-based MK 41 VLS “Desert Ship” in 2013 and 2014. Integrating LRASM with the VLS will provide every Aegis destroyer and cruiser with a long-range, survivable anti-surface warfare distributed lethality capability.

The anti-ship missile is expected to become operational with the U.S. Air Force and Navy in 2018 and 2019 respectively.

Armed with a 1,000-pound penetrator and blast-fragmentation warhead, LRASM employs a multi-mode sensor, weapon data link and an enhanced digital anti-jam Global Positioning System to detect and destroy specific targets within a group of ships.

The surface-launch LRASM variant was built on the same production line as JASSM, JASSM-ER and LRASM air-launch weapons, and delivers the same long-range, precision capability. With maturity of the MK 41 VLS integration demonstrated, Lockheed Martin will continue testing on other surface ship applications, including topside, deck-mounted launchers.
Click to expand...

“The visit affords Sailors and Marines of both ships the opportunity to enjoy the culture and history of Hong Kong, and to build positive relationships with members of the Hong Kong community,” the statement reads.

The Hong Kong port call follows the participation of both vessels in this year’s Valiant Shield 2016 naval exercise, held from September 12-23 off the coast of Guam and around the Marianas Island Range Complex in the western Pacific Ocean (See:
Please, Log in or Register to view URLs content!
).

The naval exercise, held every other year since 2006, involved 18,000 military personnel, over 180 U.S. aircraft, and the nuclear-powered Nimitz-class aircraft carrier USS Ronald Reagan, based in Yokosuka Naval Base in Japan’s Kanagawa Prefecture and currently the U.S. Navy’s only forward-deployed aircraft carrier in the Asia-Pacific region. The USS Bonhomme Richard, USS Green Bay, and nine other surface warships also took part.

“We have encountered nothing but professional mariner behavior from the Chinese vessels we interacted with,” Rear Adm. Marc H. Dalton, the commander of Expeditionary Strike Group 7 visiting Hong Kong said,
Please, Log in or Register to view URLs content!
to The Japan Times.

In April, the Chinese government canceled a scheduled port visit of the nuclear-powered aircraft carrier USS John C. Stennis without providing an explanation. As I
Please, Log in or Register to view URLs content!
:

The visit of the Blue Ridge-class command ship, USS Blue Ridge, the floating headquarters of the U.S. Navy’s Japan-based 7th Fleet, however, took place in the same month as scheduled.

China repeatedly canceled port visits in the past whenever Sino-U.S. relations were strained. “In 2007, the USS Reuben James and USS Kitty Hawk CSG were denied access to Chinese ports just around the time when U.S. President George W. Bush met the Dalai Lama and concluded a major arms sale with Taiwan. However, the USS Kitty Hawk was allowed to dock in Hong Kong five months later once Sino-U.S. ties normalized,” I noted back in April.

In August, the U.S. Navy guided-missile destroyer USS Benfold
Please, Log in or Register to view URLs content!
in Qingdao, located on the Yellow Sea in China’s Shandong Province, the first visit by a U.S. warship to China following the arbitration ruling of the Permanent Court of Arbitration on maritime disputes between Beijing and Manila in the South China Sea. The commander of the U.S. Pacific Fleet, Admiral Scott Swift,
Please, Log in or Register to view URLs content!
during the same month, urging Chinese military leadership to be more transparent about the People’s Liberation Army Navy’s intentions in the region.
Click to expand...

Jeff Head said:
Well, the ESSM has a envelope that covers three layers.

But I believe that ultimately you will see CIWS covered by those other assets on the Zumwalts.
Click to expand...

in the article FORBIN posted

the author makes this point:
"The Zumwalt will also carry
Please, Log in or Register to view URLs content!
), four of which can be packed into a single vertical launch system tube. These maneuverable missile have close-in engagement capabilities, but the Navy has already come to terms with the fact that they cannot replace a CIWS. Flight IIA Arleigh Burke class destroyers were originally to be equipped without a CIWS, and many initially sailed without one installed, relying totally on VLS launched ESSMs for close-in to medium-range protection. This proved to be short sighted, and the ships have since been retrofitted with a proper CIWS system."
(and several other points against the lack of a CIWS)

The Navy's top officer met a skeptical audience here Thursday as he told them why every sailor in attendance was being stripped of the rating title that had defined their jobs and identities.

Chief of Naval Operations Adm. John Richardson said this radical change was only the start of a career overhaul that would yield them more opportunities and better chances to get civilian jobs after the service.

“What we’ve come up with is a plan for you to be certified in multiple ratings that — Navy Occupational Specialities,” Richardson said. “This buys you a tremendous amount of flexibility, not only in assignments, but in advancement. This will give you the opportunity to advance in more than one specialty.”

The buzz had already begun earlier in the day as the news echoed across the service: Every sailor would now be known as a chief petty officer, petty officer or seaman rather than the rating titles they had gone, a tradition that dates earlier than the U.S. Navy's founding.

The radical change prompted widespread backlash online. Sailors took to the CNO's Facebook page to defend their now stripped rating titles — "Respectfully this is the stupidest decision ever," one commenter — and posted their rating badges in protest. Someone
Please, Log in or Register to view URLs content!
in hopes of overturning the Navy's move and garnered a fifth of the signatures needed to get a response in less than 24 hours.

Many of the 1,400 sailors packed into the base theater flooded to the into the aisles to ask questions and seek more information. Many hoped to hear how this change would lead to others. Many of those details are yet to be worked out.

“For now, there is no change,” Richardson said answering questions about possible advancement changes, adding: “We might get to the point where we don’t need advancement exams at all. This is going to take time and we’re going to do this smart, not necessarily fast. … We have done enough study and don’t see any obstacles right now.”

“But at the same time, I am interested in what I’m hearing and what they plan to do, and I’m willing to give it a chance and see how it works."

The Navy has had a dual system of how sailors are referred to. They have generic titles like “seaman,” “petty officer” and “chief." But they also have rating specific titles, like Gunner's Mate or Information Systems Technician.

One petty officer who took the first class exam this month says he has no problem with his rating title, information systems technician, vanishing.

“Frankly, I consider myself a RM,” said Petty Officer 2nd Class (SW/AW) Seferino Sanches, referring to the radioman rating disbanded two decades ago. “It’s all I’ve done since I have been in the Navy.”
Click to expand...

The United States Naval ship USS Hopper departs the port of Darwin to participate in Exercise Kakadu 2016.
Click to expand... 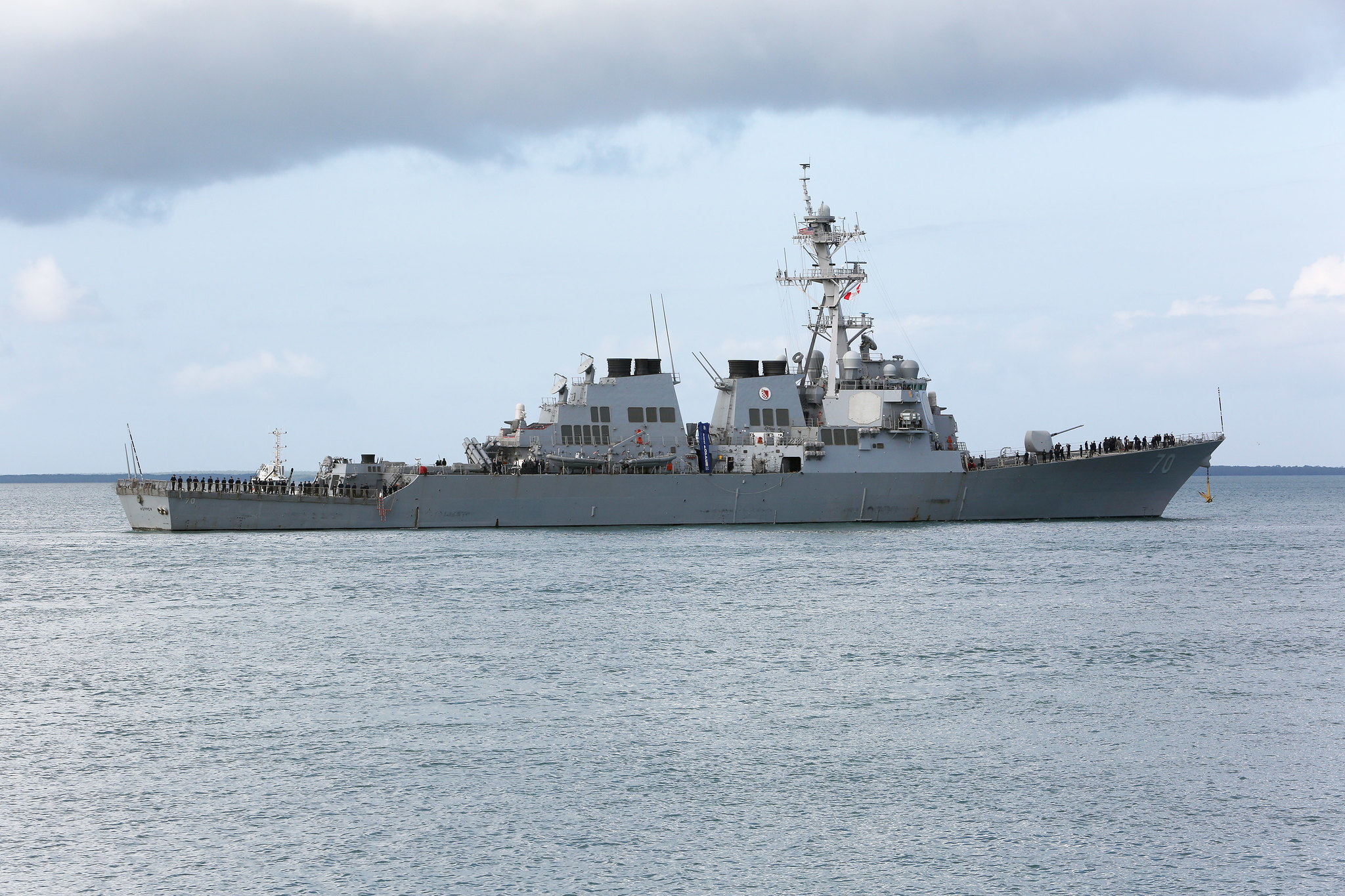 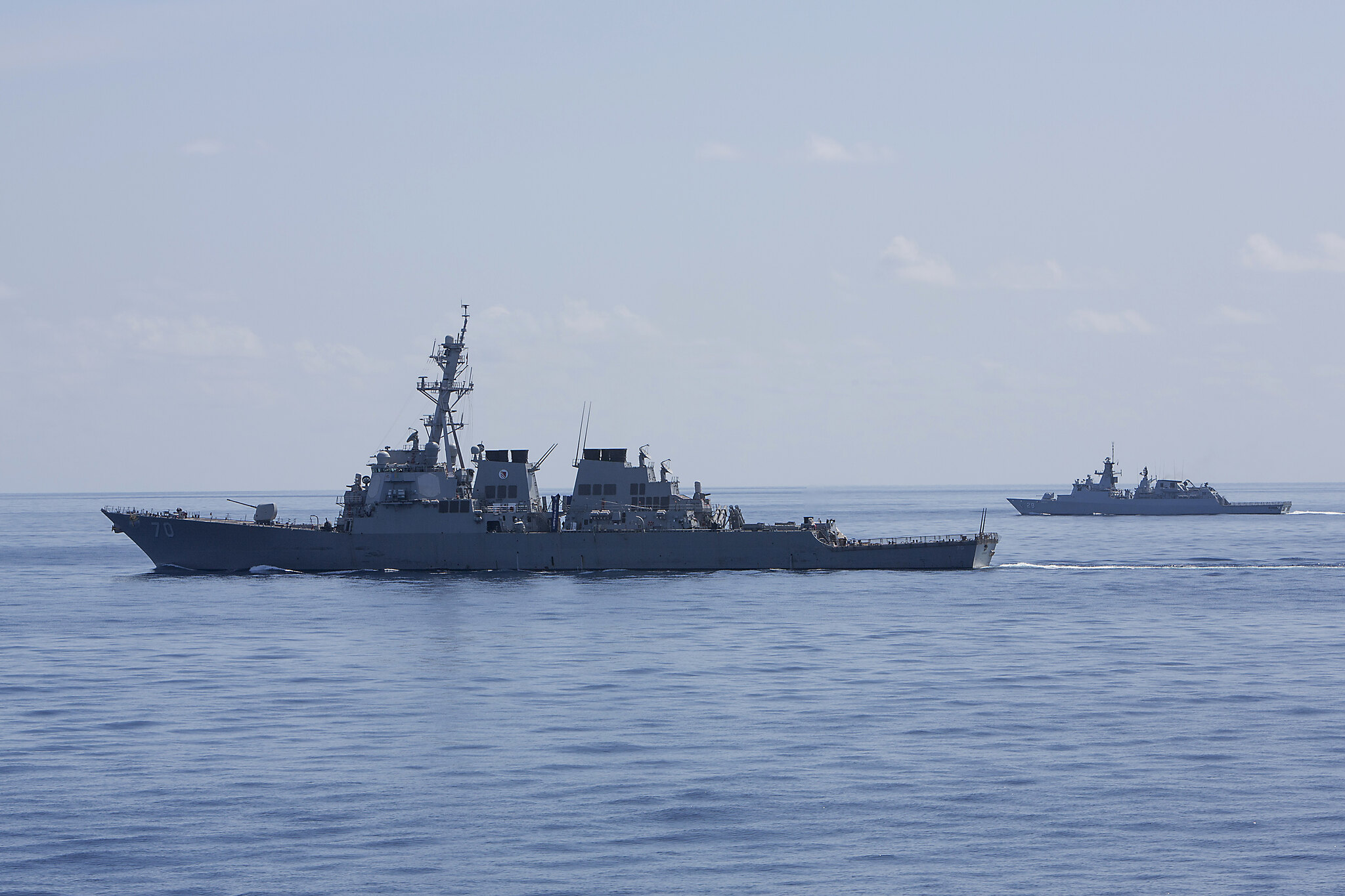 cool views of the Pearl Harbor:

Published on Sep 30, 2016
RIMPAC 2016 Harbor Phase Photo Exercise. HD Video by Petty Officer 1st Class Benjamin Lewis, 07.02.2016, Commander, U.S. 3rd Fleet, Joint Base Pearl Harbor-Hickam, Hawaii. U.S. Army 3rd Battalion, 25th Aviation Regiment (3-25 AVN) Alpha Company Stingrays provide support for an aerial photo exercise of ships moored at Joint Base Pearl Harbor-Hickam during Rim of the Pacific 2016, July 1, 2016. Twenty-six nations, more than 40 ships and submarines, more than 200 aircraft and 25,000 personnel are participating in RIMPAC from June 30 to Aug. 4, in and around the Hawaiian Islands and Southern California. The world's largest international maritime exercise, RIMPAC provides a unique training opportunity that helps participants foster and sustain the cooperative relationships that are critical to ensuring the safety of sea lanes and security on the world's oceans. RIMPAC 2016 is the 25th exercise in the series that began in 1971. (U.S. Navy Combat Camera video by Mass Communication Specialist 1st Class Benjamin A. Lewis / Released.)
Click to expand...