Brumby said:
... Richardson's entire career in the USN has primarily been in submarines, a service arm that is predominantly about posture and very little in the way of presence.

LOL Brumby, his predecessor, contrasted with Admiral Richardson in that article, actually

... graduated from the U.S. Naval Academy in 1975 and completed studies in nuclear power for service as a submarine officer.

Jura,
Not sure what you are nitpicking though. Lol.
I am simply making a point that when you spent your almost entire career in an environment that is predominantly about posture rather than presence, that becomes part of your makeup. What better leader to have onboard to lead such an initiative than one who had lived and breathed posturing. 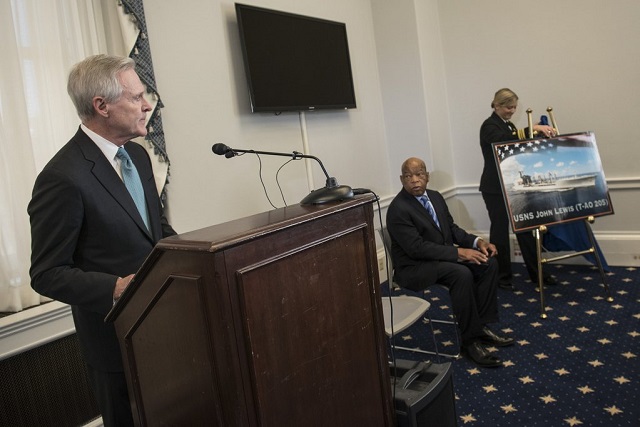 The U.S. Secretary of the Navy (SECNAV) Ray Mabus announced that the first ship of the T-AO(X) next generation of fleet replenishment oilers (T-AO 205) will be named USNS John Lewis after the civil rights movement hero and current U.S. representative of Georgia's Fifth Congressional District.
...
The future USNS John Lewis will be operated by Military Sealift Command and provide underway replenishment of fuel and stores to U.S. Navy ships at sea and jet fuel for aircraft assigned to aircraft carriers. A contract will be awarded for the ship in summer 2016 and construction is expected to begin in 2018.
Click to expand...

Staff member
Super Moderator
GREAT video of the medevac of the ailing fisherman off of the deck of the USS Zumwalt during her initial builder's sea trials.

Those trials turned into a life or death drama for a fisherman who had a heart condition and the Coast Guard was called to get him. Given the sea state and the conditions, they preferred lifting him off of the deck of the Zumwalt that happened to be in the area at the time.

A small boat was launched from the Zumwalt with Navy personnel to transfer the fisherman to the Zumwalt, and then the Coast Guard helicopter medevac'd him form there.

Great stuff. Kudos to the US Navy and US Coast Guard.

This will be a class of 17 large replenishment oilers to replace the 15 USNS Heryy Kaiser TAO class oilers currently in service.

The Kaisers started entering service in 1986 and have a projected 35 year service life. They displace 41,000 tons and are 677 feet long.

They will look very similar, but may displace upwards of 50,000 tons, and be a little longer.

Registered Member
Navair Systems Command 2015 year end summary. The narration provides some interesting info for the video clips that have been seen over the past year.

The U.S. Navy's Chief of Naval Operations Adm. John Richardson released 'A Design for Maintaining Maritime Superiority,' Jan. 5, a document that addresses how the U.S. Navy will adapt to changes in the security environment and continue to fulfill its mission.

The four lines of effort are the following:
- Strengthen Naval Power at and from Sea
- Achieve High Velocity Learning at Every Level
- Strengthen our Navy Team for the Future
- Expand and Strengthen our Network of Partners
Click to expand...

“The contract will produce the diagrams, drawings and information necessary to design, build, test and operate a submarine, enabling the shipbuilder(s) to start construction in 2021,” she said.
“The RFP release represents an important step in the way ahead for the program.

O’Rourke said the contract would be awarded by the end of the year, and George Drakeley, the executive director of the Program Executive Office for Submarines, said in October that a
Please, Log in or Register to view URLs content!
.

To support a first patrol in 2031, the Navy must begin building the lead ship in 2021, begin buying long lead time materials in 2019 and start the design process this year, Drakeley said.
Click to expand...

ORP program manager Capt. David Goggins said in October that the lead ship would cost 17.2 billion, including both the cost of construction and the up-front design costs. Boats 2 through 12 should cost about $4.9 billion apiece.
Click to expand...

So Called "Smart guns" have been around for a few years now but have never really taken off, with makers going bankrupt from lack of sales. Some have claimed this is because of Conspiracy and manipulation. seems to me that it's just as likely to have been the result of poor marketing and pricing ( between a couple hundred dollars for a .22 Cal conventional pistol and a couple thousand dollar .22 cal so called "smart pistol" )additionally reliability issues Outrageous claims of benefits often made by manufacturers have not made it any more successful.
Frankly in this context I only see a scheme doomed to failure. The Aim is it seem the hope that the DOD can make it work and via volume reduce the price to a point where it could become realistically a feature available for the commercial market. The Problems are that the DOD has no need for this really, and furthermore the issues of the tech mean that it is a real potential weakness. Remember the "Smart" System needs power and programing. In the field for to long and the battery dies leaving you with at best a awkward short spear. If the Enemy hacks the system suddenly the whole army could be disarmed.
Everyone here Should know I am a fan of Smart scopes like Trackingpoint systems and feel it is the future of the Infantry, but one thing Id say is that in the end the system should always have a "Autistic mode" or a "Dumb mode". A setting where the smart scope boresights and acts just as a red dot and the soldier falls back to basics.

Here is 2016 Military wish list. Some cool concepts to think about that don't sound to hard to make.

The Combating Terrorism Technical Support Office has released their wish list for 2016 and beyond.

Going after terrorists has never been a simple or straightforward affair, but does it really require something called “laser doppler vibrometry?” Affirmative, according to the Combating Terrorism Technical Support Office, or CTTSO, which released its new
Please, Log in or Register to view URLs content!
on Dec. 18. This year’s edition of the annual announcement, which outlines the various gadgets and tech that the office is looking to buy or build, reads like a prop list for a Marvel Comics movie — and yet they’re also technologies that could eventually make their way into wider commercial use. So what does the future of counterterror tech look like this year?

Don’t you hate when you’re disarming an improvised explosive device and you have to drop what you are doing to make sure your oxygen tank isn’t running low? CTTSO wants a voice-activated “bomb suit helmet heads up display.” Basically, it’s a helmet that displays key pieces of information to the wearer in a way that doesn’t get in the way of the task at hand. Those bits could include details of the explosive device, radiological or chemical alerts, even the bomb tech’s heart and respiration rate, gathered from body sensors.

FitBit for soldiers under fire

Fast reaction team members, like the contractors that went in to secure U.S. installations in Benghazi in 2012, can’t always get on the radio when they’ve been hit. If they’re under fire or hiding, they may have to maintain radio silence. CTTSO wants “wireless health monitors” that soundlessly broadcast biophysical information about the wearer to a commander for at least six hours. The office also wants wearable chemical and biological sensors as well.

FitBit for cars and trucks

What happens when the courier you just sent out from your base carrying important evidence or something else is captured and you don’t hear about it for months? A bad situation gets worse is what. “Currently the only status communications come directly from the courier, leaving command center personnel unaware if the courier has been captured or injured and/or the controlled materials compromised,” the announcement reads. The office wants an automatic “vehicle intrusion detection system” that can collect and transmit thermal, motion, and other data.

A portable device that can track a gunshot to its source

“If subjected to incoming small arms fire, security forces gain an advantage when provided timely information regarding the firing source (bearing, elevation, range),” the announcement reads. Gunshot tracking systems
Please, Log in or Register to view URLs content!
, but they’re big and generally immobile. CTTOS wants a system that can fit onto vehicles to give tactical teams an immediate sense of who is shooting at them from where.

Today’s body armor is heavy and bulky, which can be a real downer for special operations forces on covert missions. But the thing about those missions is people tend to shoot at you while you are carrying them out. CTTOS wants what they are calling a tactical standalone plate: “a lighter, thinner armor solution would enable greater mobility, lower visible signature, and the opportunity to carry other equipment due to the weight reduction” — but still stop an armor-piercing 7.62 x 51 mm bullet.

Israel is already experimenting with tunneling and snake robots to find and scope out underground passages on the Gaza strip.

CTTOS wants to put something similar on the United States border. In addition, it wants software to analyze the “mechanically-bored tunneling threat,” as well as X-ray scanners to “locate tunnel entrances/exits and other man-made voids … and drug and weapon caches concealed in the floors and walls of buildings and underground municipal infrastructure.”

If you’ve never heard of “laser doppler vibrometry,” you’re not alone. It bounces harmless laser beams off a target to produce a digital picture of the surface, sort of like a blind person using their fingers to identify a face. CTTOS wants a laser doppler vibrometer sensitive enough to positively identify a person by his or her upper torso “unique cardiological signature” in 60 seconds from more than a football field away.

Before you decide that the country in which you are operating probably won’t bring charges against the insurgent mastermind you’re tracking, you may want to consult the Foreign Criminal Law Analytical Capability. CTTOS envisions this as a database that you search to compare the behavior of a particular person to “relevant foreign criminal statutes/regulations.” You can also look up how willing a given government might be to enforce those regulations.

In addition to the above, CTTOS’s wish list includes more mundane and predictable fare like data analysis and fusing, secure communications, etc. But the most revealing item isn’t technological at all; it’s a request for analysts’ best guess as to how counterterrorism operators will proceed in a future environment where enemies are much more able to use consumer technology against them. The request is for “a descriptive report that defines and describes the … ‘highly contested’ and ‘austere’ information environment envisioned in 2025 to 2035.”

Technology giveth and technology taketh away.
Click to expand...