(noticed inside
Wasp ARG ships in live-fire drill in South China Sea
Please, Log in or Register to view URLs content!
)
A

Air Force Brat said:
Whiner!, just because you sound like the Honey Badger when you nag about money, I already have one wife telling me I can't afford a Car, Airplane, Motorcycle, nother gun, etc, etc, etc....

Yeah, she is the Head Teller at the local bank too,,, anyway Jr.

Please educate me ... what is the practical benefits or advantage of having the capability of pulling 6Gs at 50,000 ft ?
A 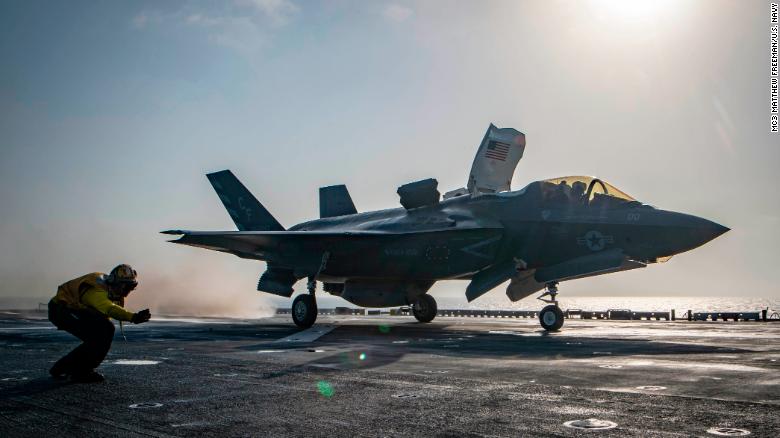 The pilot ejected safely and is being evaluated for injury, according to the official.
While the jet has experienced mishaps in the past, a US defense official told CNN that this is the first time an F-35 has crashed.
The Marines confirmed the incident later on Friday in a statement, saying the "pilot safely ejected from the single-seat aircraft and is currently being evaluated by medical personnel. There were no civilian injuries,"
The statement said that the jet belonged to Marine Fighter Attack Training Squadron 501 stationed at Marine Corps Air Station Beaufort.
"The cause of the crash is under investigation," it added.
The F-35B joint strike fighter conducted its
Please, Log in or Register to view URLs content!
.

Please, Log in or Register to view URLs content!
The F-35 stealth jet has been called the most expensive weapons system in history, and its development was beset by multiple delays before it was deemed combat ready.
Earlier on Friday the Pentagon announced a new contract for the next batch of F-35 aircraft, saying that the plane's contractor, Lockheed Martin had agreed to a reduced price.
The announced per-unit price tag for the Marine Corps F-35B was $115.5 million.
The F-35B is the only version of the aircraft that is able to land vertically like a helicopter. It can also take off in a much shorter space than other fighter jets.
The new contract means the price for the Air Force's variant of the jet, the F-35A, fell below $90 million for the first time.

antiterror13 said:
Please educate me ... what is the practical benefits or advantage of having the capability of pulling 6Gs at 50,000 ft ?
Click to expand...

So General Norton Schwartz was bragging on the fact that no other fighter on the planet will even come close!!! not one, not now, not in the near term either, 5 to 15 years out, it makes more lift and thrust than fighter in development or on active duty, even the Su-57 is nowhere near that type of performance...

That would also well illustrate that the F-22 is nowhere near its absolute ceiling at 60,000 ft, the service ceiling is listed at 65,000 ft, but if necessary they could fly it higher, but it would be rather impractical..

one of the major tactical advantages is the terminal A2A missile performance you gain in range and speed....

as well as any weapon fired against you will be burning fuel and bleeding energy as it attempts to climb to your altitude... so it opens up a margin of safety that others do not have, that maneuverability increases the likelihood of your survival.....
Last edited: Sep 30, 2018

Air Force Brat said:
... so it opens up a margin of safety that others do not have, that maneuverability increases the likelihood of your survival.....
Click to expand...

plus let me add the little I think I know (LOL or correct this), which is interceptions are made from above

so,
Is Boeing’s ‘Eye-Watering’ T-X Bid A Game-Changer?
Please, Log in or Register to view URLs content!

While proving a resurgence in its ability to capture new programs,
Please, Log in or Register to view URLs content!
’s win of the U.S. Air Force’s T-X trainer also may mark a turning point for the business model at the company’s defense division.

Much as commercial aero engine companies moved years ago toward selling their powerplants below cost to secure marketshare, with the intent of making money later on aftermarket services, Boeing Defense may be headed in the same direction.

The relatively low-bid strategy for T-X harks to a similar path to win the Air Force’s
Please, Log in or Register to view URLs content!
, a commercially-based program once seen as relatively easy to deliver on but which has cost Boeing around $3.4 billion extra to produce through the second quarter of this year. Yet, Boeing has remained optimistic it will make up any near-term monetary shortfalls in the KC-46A through longer-term production orders, including to allied governments, and services for the fleet such as maintenance, repair and overhaul (MRO).

By contrast, the U.S. Air Force first estimated it would cost more than $19 billion to buy a package with 350 new advanced jet trainers and about 40 simulators. Instead, Boeing offered to deliver up to 475 T-X aircraft and 120 simulators for no more than $9.2 billion. That’s equivalent to an “eye-watering” $19 million unit price per aircraft, excluding the costs needed to pay for the engineering and manufacturing development (EMD) phase and 120 simulators, says James McAleese, founder of McAleese & Associates.

Moreover, the Air Force’s terms assign all the risk to Boeing, which agreed to a fixed-priced incentive fee contract for the EMD phase and firm fixed-price deal for production.

The fixed-price-style T-X win seems similar to KC-X to some financial analysts. “The bid was clearly aggressive…and Boeing’s ability to achieve profitability on the contract will likely hinge on winning a significant international order book, which we think may be possible given the clean-sheet design of Boeing’s aircraft,” Credit Suisse analysts say. “We also expect an attractive aftermarket tail likely played into Boeing’s bid framework, particularly given Boeing’s push into services.”

“The total market is estimated to be 2,600 aircraft valued at [about] $40 billion,” notes Sheila Kahyaoglu of Jefferies. “The ‘One Boeing’ approach also lends itself to service opportunities as the fleet could be in service for [more than] 50 years with multiple upgrade opportunities.”

Boeing’s programs are not the only so-called low-bid, high-profile weapons awards to emerge in recent years, of course.
Please, Log in or Register to view URLs content!
won the Air Force’s B-21 Raider in a hard-fought contest in which rivals, through public advocates and representatives, argued the strategy placed the bomber program at more risk.

Indeed, the new Boeing awards are just further evidence of a change in philosophy at the Pentagon in recent years—voiced publicly by then-Pentagon acquisition czar Frank Kendall during the Obama administration—that the
Please, Log in or Register to view URLs content!
could push competitions to the point where primes might take a loss up front on the program. The acquisition reform approach was predicated on the belief that most or all of all the legacy primes, which have recorded record profits in recent decades, could afford to take one-off losses for their franchise wins. Furthermore, no program in recent memory was canceled because the contractor took a financial charge.

However, defense-oriented Northrop notably has decided to forego pursuing several other defense awards and some analysts believe it is in part because the company cannot afford to take on too many low-margin programs such as the B-21. Boeing, however, is far more diversified: its commercial aircraft backlog stood at $433 billion at the start of the year, while Boeing Defense was sitting on $50 billion in work, according to the last annual regulatory filing. In addition, the corporation has set a target for the year-old Boeing Global Services division to reach $50 billion in annual revenue by the early 2020s, and it is already around $15 billion.

“Because of their commercial business and tremendous volumes, they have terrific leverage over suppliers,” says Richard Aboulafia, vice president, Analysis, at the Teal Group. “That really helps with pricing. So yes, both in terms of critical mass and in terms of manufacturing know how, this win reflects the advantage of being both a commercial and military contractor.”

Boeing executives spotlighted the company’s turn toward services in July. “This is a bigger market in the long term than the aircraft market,” Boeing’s chief commercial aircraft salesman, Randy Tinseth, said during the Farnborough Airshow. “We only have 7% [services] market share, so what a great opportunity as we grow to expand our share.”

Furthermore, thanks to increasing business diversification, Boeing expects to reach operating profit margins in the mid-teens by 2020—which, as a whole, would rank the company closer to other worldwide industrial companies and ahead of heritage defense primes.

Part and parcel to achieving those margins has been Boeing’s supply chain squeeze, the Partnership for Success program, and it came into play with T-X. A year ago, Boeing chose Triumph Group as a key supplier for Boeing’s bid. That selection came as Boeing was finalizing a master contract arrangement with Triumph, as has been done with several other Tier 1 and 2 providers. Triumph is in the midst of a restructuring and streamlining in part to profit after meeting Boeing’s terms.

“The bid and the win will rely on BGS to generate more revenues downstream, and I think this is perhaps where the difference with the ‘One Boeing’ approach by [Boeing Chief Executive Officer] Dennis [Muilenburg] is showing results,” says Michel Merluzeau, director of aerospace and defense market analysis for the Air Insight Group.

The degree of cost-cutting implied by Boeing’s bid for T-X also may hit at other technology breakthroughs. In 2015, Aviation Week & Space Technology reported on the “Black Diamond” project within Boeing, which sought to transform its defense production system with low-cost manufacturing techniques.

Boeing’s victory in the T-X competition followed four days after winning the Air Force’s competition to replace a fleet of UH-1N helicopters and a month after claiming a U.S. Navy contract to deliver a new fleet of carrier-based, unmanned tankers. In all three fixed-price deals, Boeing submitted bids below the program cost estimate.

So far, it’s not clear if Boeing’s aggressive pricing approach is a one-month blip driven by a short-term plan to rapidly drive growth or fits within a broader strategy with long-term implications for pricing even beyond the defense business.
Merluzeau, a Seattle-based aerospace consultant, bets on the latter option.
“This is a new standard in my opinion,” he says. “This is an all new set of production and design dynamics. I expect lessons learned to flow inside the enterprise and benefit [New Midsize Airplane] and [Future Single Aisle programs] significantly—production and system and engineering really.”
Click to expand...

obviously not news so just the link here, thought I might kinda commemorate The Battle of Mogadishu 25 years later: How the fateful fight changed combat operations
Please, Log in or Register to view URLs content!

inside
US Army triggers design competition for future attack reconnaissance helicopter
Please, Log in or Register to view URLs content!
:
"By staying flexible, the Army hopes to steer clear of some of the mistakes it has made in the past attempting to acquire an armed reconnaissance helicopter. The Army failed three times to procure a new aircraft — the most memorable being the cancellation of the Comanche helicopter program in 2004 after two aircraft were built and $6.9 billion was spent."
You must log in or register to reply here.