Staff member
Super Moderator
Since the PLAN has launched and is now testing its own indegenous LCAC, I thought it appropriate to have a seperate thread for these vessels since they will not only be embarked on
Please, Log in or Register to view URLs content!
, but eventually on a PLAN LHD shold they build the larger amphibious assault vessel with a well deck.

So, in conjunction with the building of the PLANs first LPD, the Type 071, Yuzhao Class LPD, the PLAN also embarked on designing and building their own landing craft, air cushion (LCAC) to go with it.

In 2008, a new, indegenous Chinese LCAC was observed. It is remarkably similar to the US LCAC, except the control house is on the port side of the vessel instead of the starboard side. In addition, the Chinese LCAC apppears a little smaller than the American LCAC.

These vessels appear to have four gas turbines to power them. It is not known whether those turbines are indigenous Chinese designs or based on Russian or Ukrainian technology

By 2010 up to four had been observed, but it is anticapted that more are building since the PLAN launched a second Yuzhao class LPD in 2010 and will likely launch a third in 2011. Since each LPD is supposedly capcable of carrying 3-4 LCACs it is anticpated that 10-12 will be built as a minimum. More if more LPDs are built, and even more if the anticpated PLAN LHD Class Amphibious Assault ship is constructed.

Here are some pics:

I have a seperate page for the vessels
Please, Log in or Register to view URLs content!

...and they are compared side by side with the US NAvy's counterpart (along with all other amphibious vessels)
Please, Log in or Register to view URLs content!

Staff member
Super Moderator
The PLAN has indicated, and there has been talk of four of these new lCACs fitting into the well deck of the Type 071, Yuzhao LPD. Whjat do you think here, reading this thread and onb SD?

Can four fit in there?

The US San Antonio class, which is larger than the Type 071 can only carry two US LCACs, and the larger Tarawa and Wasp class LHA and LHDs will only carry two and three respectively in a much larger well deck area.

I think 2-3 is a more realistic number for the
Please, Log in or Register to view URLs content!
.

This is a great leap forward for the PLAN. I do not see their LPDs carrying more than two of these beauties. Where as the well deck of an LPD 071 does not appear to be large enough.

This is a great leap forward for the PLAN. I do not see their LPDs carrying more than two of these beauties. Where as the well deck of an LPD 071 does not appear to be large enough.
Click to expand...

Now, the US LCAC is a little larger too...but not that much larger.

I still think two LCACs for the Yuzhao (Type 071) LPD is the number...maybe three, but even that, IMHO, is a stretch.

We shall see. If we knew the dimensions of that well deck (like we do for the US vessels) we could put it to rest completely.
Last edited: Jun 14, 2011
N

There is no need for guesswork. At PLAN's 60th anniversary parade in 2009, it was officially confirmed that 071 can carry up to 4 LCAC.

Screenshots of the official video of the parade with captions can be found at cjdby.
N

I think the San Antonio has a separate well and vehicle deck, whereas the type 071 has only well deck that doubles to carry vehicle (maybe less flexible).


nosh said:
There is no need for guesswork. At PLAN's 60th anniversary parade in 2009, it was officially confirmed that 071 can carry up to 4 LCAC.

Screenshots of the official video of the parade with captions can be found at cjdby.
Click to expand...

Thanks, I will take a look....(later) I looked, but do not read Chinese. Could you give me a link to the page with the pics, video and captions? Thanks.

I know the PLAN is saying they can carry four...I would like to see the size of the well deck to confirm. Based on the capablitities of other nation's who have been doing this for a long time, four LCACs on a vessel that size do not coincide with those experiences.

That's not to say it cannot be done...I'd just like to see the specs and dimensions to get me believing it will be done.

The fact is, the US does have a different class of ships, the Landing Ship Dock (LSD), the Whidbey Island, that was designed from the start to have a massive well deck for its size (16,000+ tons full load), which is smaller than the Yuzhao, which can carry four LCACs.

But it does this at the cost of giving up cargo space and is not a full LPD.

Anyhow, they are fine ships and the US built eight of them. They are well armed to for self defense with two 20mm CIWS, two 25mm mk 38 cannons, six .50 cal MGs, and two RAM missile launchers.

Here's a couple of pics of the Whidbey Island Class LSD, the US Navy has eight of these. 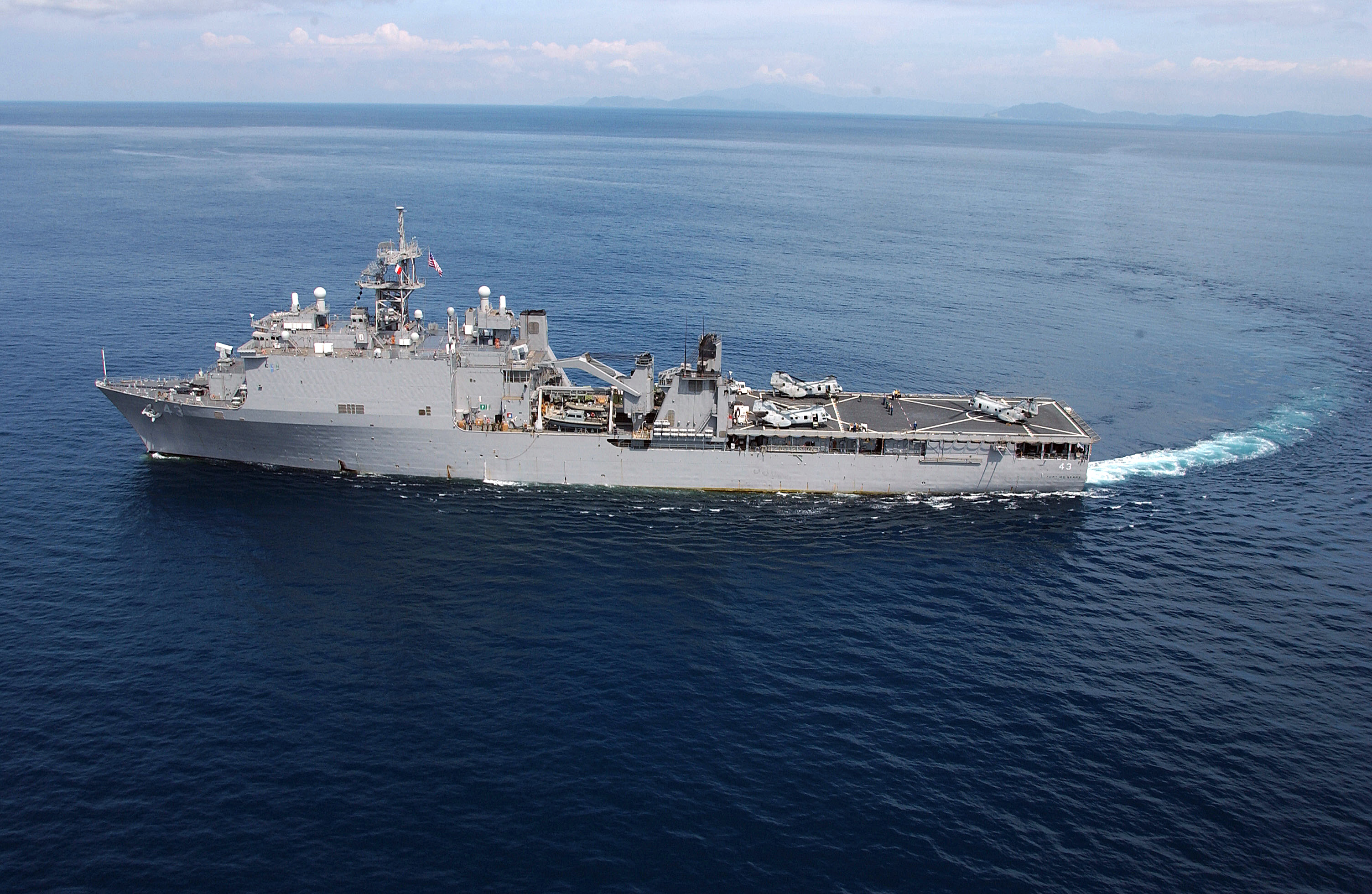 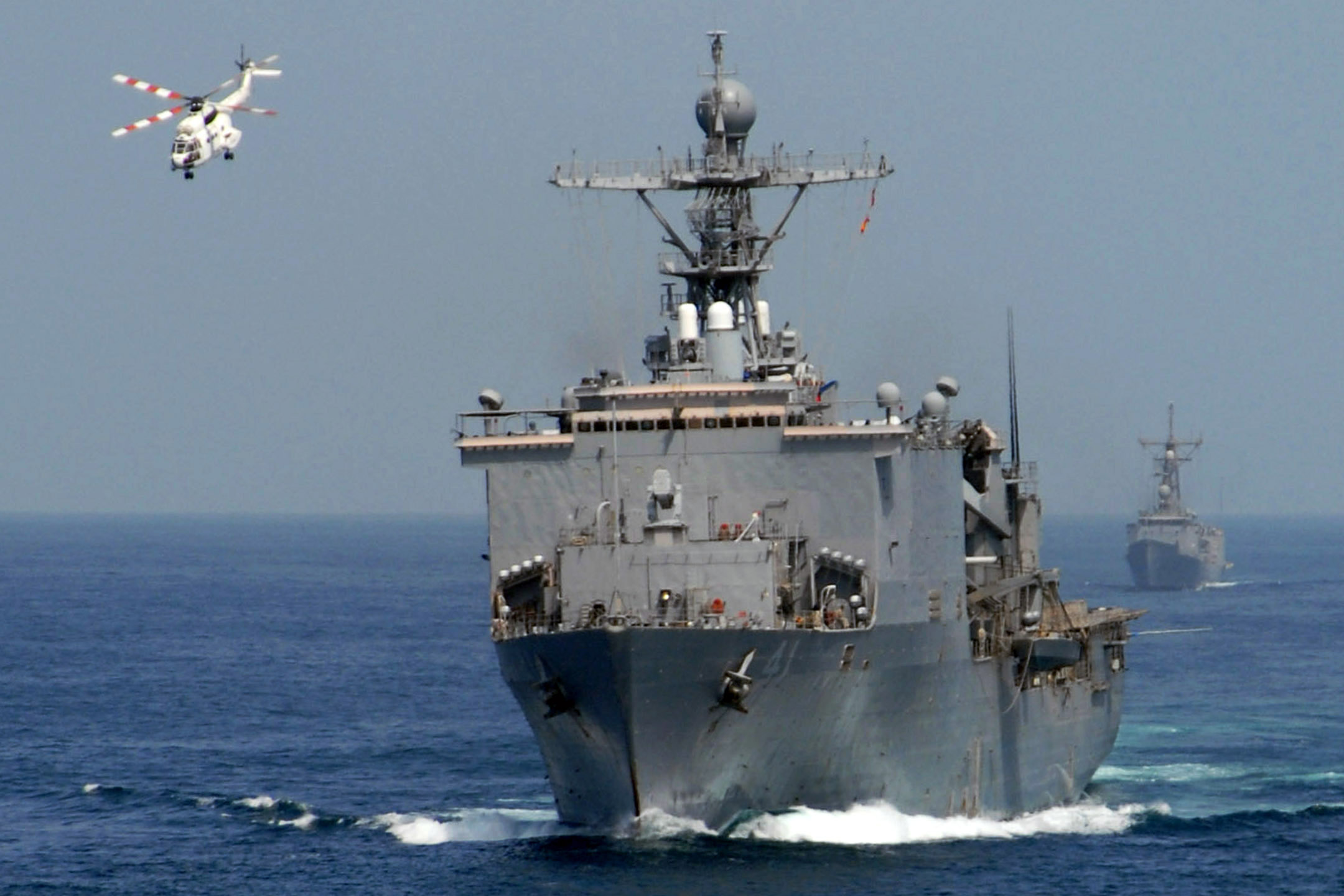 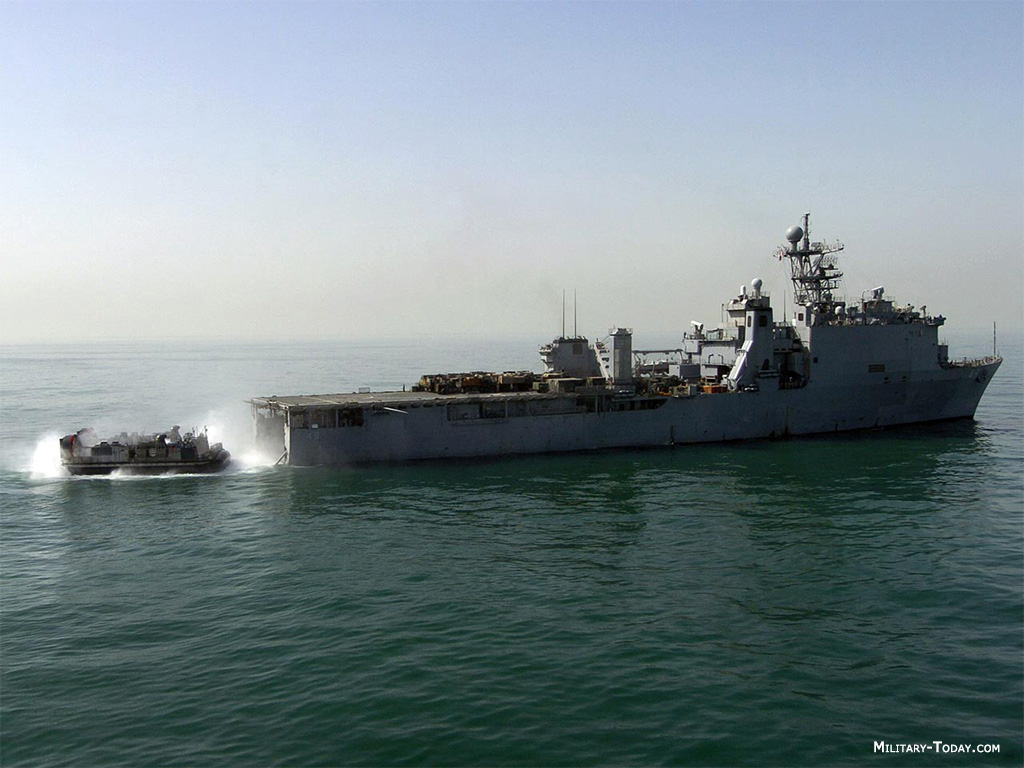 Jeff, here are some photos of a 071 model showing how 4 LCACs are placed in well deck.

Re: Â¦^??: Re: The PLAN LCAC Landing Craft Air Cushion

Jeff, here is the screenshot from cjdby.


nosh said:
Jeff, here are some photos of a 071 model showing how 4 LCACs are placed in well deck.

Thank you very much.

I have also continued researching and found corroborating information on GlobalSecurity and elsewhere. Based on all of this, I will say that it is apparent that the PLAN has designed the well deck of the Type 071, Yuzhao to accomodate 4 LCACs. They are giving up storage space in the vessel to do so, but the US did the same thing with the Whidbey Island class.

Of course, the US has 8 Whidbey Island class vessels, already has eight San Antonio class LPDs (and will build two more) and has 10 very large LHA and LHD Amphibious Assault ships...so they (the US) has room to make for such diversity.

Anyhow, thanks a lot. I will call it four LCACs on the Yahao Class LPD.

If have updated my pages accordingly and am adding this pic to those pages: