anzha said:
Please, Log in or Register to view URLs content!
I debated posting this, but decided to do so only to point out as the space faring nations put together orbital AWACS stealth is going to need to change to handle that angle as well, if it can.
Click to expand...

This isn't anything new, unique, exclusive*, or impressive these days.

SAR satellites have been going up in their dozens for over decade in China, there are many commercial ones orbiting for about half a decade. The military ones have preceded them by some margin.

*So far we've only seen China display (the videos showing flying aircraft being tracked when flying over cities) and hint at using satellites to track aircraft but obviously how it's done is not ever discussed. These were not of SAR satellites though. Satellites for observation using radar certainly exist as well, SAR or otherwise. In fact I think the Chinese just launched another one in the Shijian series? Or another class.

This "issue" for stealth fighters isn't limited to Russia. American stealth aircraft can or are already detectable using this means. How effective that is for attacking them is another question. Ground based networked anti-stealth, specialised UHF/VHF radars probably can do the job a lot better. Even then they still run into the problem of contributing to actually bringing stealth aircraft down.

All this USNI article talks about is some American commercial SAR being able to spot static Su-57. Doing this doesn't require, well anything special. The worst SAR could do this and these particular images seem to suggest whatever commercial SAR is being used, is a pretty rudimentary one at that. Modern SAR satellites can detect and monitor millimeters of movement for things on the ground.

Staff member
Super Moderator
Production variant of Su-57 appears to use one-piece dorsal aircraft skin. Are they still fastened to the airframe via bolts?
G

siegecrossbow said:
Production variant of Su-57 appears to use one-piece dorsal aircraft skin. Are they still fastened to the airframe via bolts?
Click to expand... 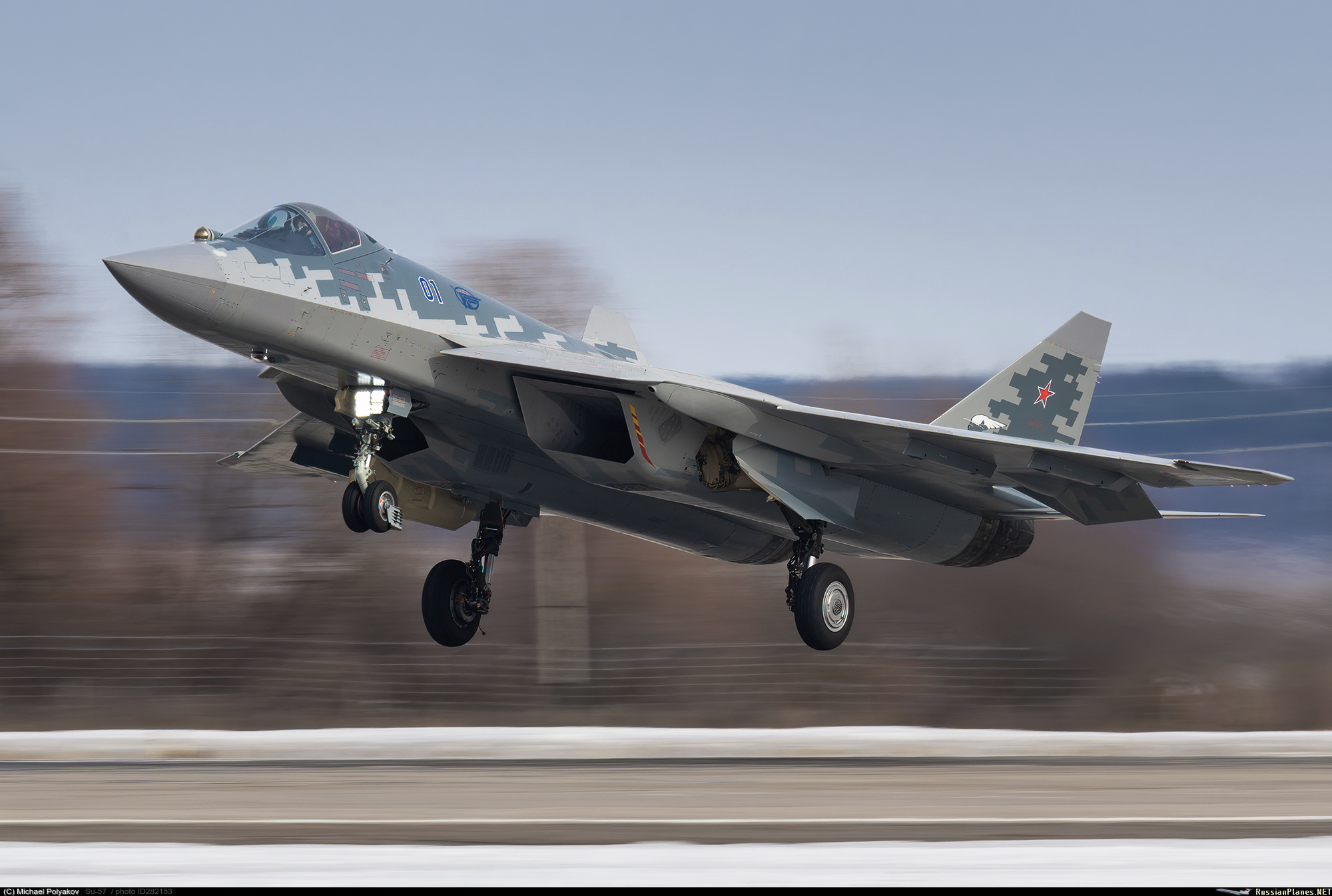 Registered Member
The conventional hydraulic system does have an elevated 5000psi/350bar working pressure though, like Rafale and B-2.

Registered Member
I think I ask this every year because I forget, is this the final canopy? one piece would look nice.
G

e46m3 said:
I think I ask this every year because I forget, is this the final canopy? one piece would look nice.
Click to expand...

It is harder to make single piece canopy resistant against bird strikes. Russians tend to try to make their aircraft more robust than US does usually. If you look at the US ATF YF-23 prototype which competed against YF-22 it also uses two piece canopy.
A

gelgoog said:
It is harder to make single piece canopy resistant against bird strikes. Russians tend to try to make their aircraft more robust than US does usually. If you look at the US ATF YF-23 prototype which competed against YF-22 it also uses two piece canopy.
Click to expand...

Yep Russian are doing rugged aircrafts that are not prone to become hangar queen.

When the Russian went to fly with the blue angels, in 1992. Their commentary were awesome on the US aircrafts. They clearly said that the FA-18 they tried were a marvelous machiery, like some exotic cars. But they were not war machines like their jets and would not endure harsh conditions.

The 5th generation Sukhoi Su-57 Felon is poised to improve with significant upgrade equipment by 2027, according to sources. The current variant flying is not optimized yet and could have better peak performance.

These changes will be a powerful engine and hypersonic missiles that will significantly improve its status as one of the most capable fighters. The engine installed on the Felon is currently the stop-gap until its new jet engines are coming soon.

The deal between United Aircraft Corporation and the Russian Ministry of Defense will be 25 out of 76 planes as part of the contract. About 25 will have the new high output engine and the hypersonic weapons, reported
Please, Log in or Register to view URLs content!
.

In an interview from Russian defense sources privy to the defense deal, it was reported cited
Please, Log in or Register to view URLs content!
.

Replacing the original engine will be the second stage engine thoroughly tested for service by 2024. But after the tests that the powerplant will have ready for service in 2026, and by 2027, it will be standard equipment for the Felon.

In the meantime, the hypersonic missile will be the only upgrade available, said sources close to the project. The Kh-47M2 Kinzhal missile will be mounted that has been tried on the hard point of a MiG-31. It has the top speed of Mach 7-10 which can bypass any missile defense used now. Though the missile is supposed to fit, the Sukhoi Su-57 Felon underbelly allows more stealth.

By 2020's end, the first Su-57 entered the Russian Aerospace Forces. In 2024 there are plans to have 22 of them in service. A total of 76 stealth Felons would be delivered by 2028 for three air regiments.

The second stage engine will allow supersonic cruising speed that started tests in 2017. Compared to the AL41 engine (Su-35), and the improved power-to-weight ratio will carry more weapons.

This Second Stage engine for the Su-57 is a 5+ generation engine that delivers better performance over a 5th gen jet engine, which might be better than US variants, cited
Please, Log in or Register to view URLs content!
.

According to Yevgeny Marchukov, general designer, director of OKB, the 5+ generation engine is the most advanced to date. It will undoubtedly have advantages like better trust output, consumption of fuel, and specific gravity. He added that the Felon engine might be the most notable technologically. The engine is made to be crazy powerful and lasts for 30-50 years of service!

For starters, this is a rare chance for anyone to speak about a top-secret engine and how it performs based on engineering. This stuff is usual hush-hush, but enough is broadcasted but not the actual numbers involved, though enough to tease its capabilities to the west.

A comparison might be the second stage 5+ engine has more power than Pratt and Whitney F-135 of the F-35, the only stealth fighter in widespread use now. By contrast, the Sukhoi Su-57 Felon has a lot going for it and soon may find itself locking horns with the F-35, but a better engine and hypersonic weapon give it an edge.
A

Registered Member
The Russians are suggesting the Su-57 will get a nozzle like on the Ohotnik-B UCAV: