No need to go to mainland for difficult operation now that 5G is operational in South Sea. See the benefit of 5G Country that blocked 5G is modern day Luddite
5G clinic serves troops at sea

No need to go to big hospitals far away, as a recently established 5G remote ultrasonic clinic improves medical support for army personnel and residents on the islands in the South China Sea while reducing costs.

Since the remote clinic started operations in April, 62 military personnel and civilians have benefited from the 5G remote ultrasound outpatient service. Among them are 58 servicemen and women stationed on Xisha Islands, who underwent abdominal and gynecological check-ups and emergency services without leaving the island, PLA Daily reported on Tuesday.

The clinic allows troops and residents living on the islands in the South China Sea suffering from health problems get timely medical treatment via 5G technology, it reported.

Lü Faqin, the doctor of the ultrasonic clinic, was quoted by the PLA Daily as saying that when troops suffer from injuries or emergency symptoms, they could receive diagnosis and treatment within 24 hours with the 5G technology.

Doctors from the Hainan Hospital of the People's Liberation Army General Hospital, based in Sanya could remotely monitor their conditions.

Doctors can remotely operate the mechanical arm in real time at the patient end.

Through 5G technology, images can be transmitted in real time and precise positioning can be achieved for remote ultrasonic examination and treatment. Doctors and patients can also communicate through voice and video.

When there is no such clinic, patients in urgent need of medical attention were always being airlifted to other hospitals and even other provinces such as Guangdong, according to Chen.

Chen noted it costs five to 10 hours, depending on weather conditions, to dispatch a military aircraft and transfer the patient in the South China Sea to nearest hospitals, usually those in Sanya and Haikou.

There are two major hospitals in the South China Sea - one in the Yongshu Reef of the Nansha Islands and the other on Yongxing Island of the Xisha Islands, media reported.

A patient from Xisha Islands was diagnosed with acute calculi obstruction by using 5G remote ultrasound technology. It only took two minutes to diagnose the patient's symptoms.

The next morning, the remote ultrasonic robot found that the patient's stone had been discharged.

The Hainan Hospital in Sanya will also program robots to launch remote ultrasonic checks to monitor the daily training of the soldiers, and develop more remote clinics for the solders and other residents in the South China Sea, said the PLA Daily report.

The US and Russian navies are at odds over an apparent near-collision in the Philippine Sea, with both sides blaming each other. 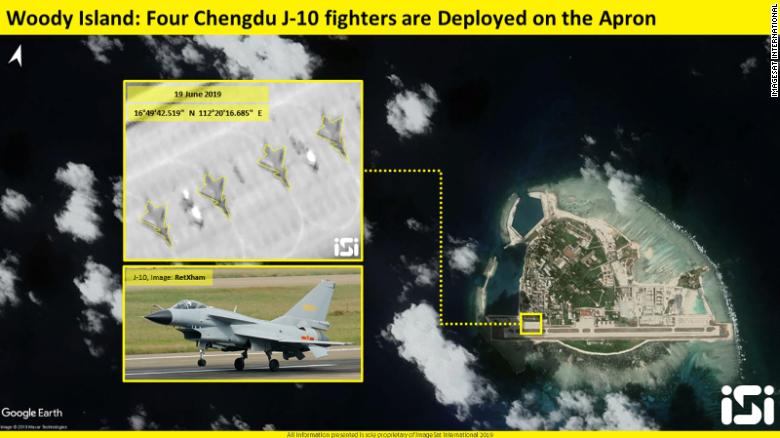 The image was taken Wednesday and represents the first time J-10s have been seen on Woody or any Chinese-controlled islands in the South China Sea, according to
Please, Log in or Register to view URLs content!
, which supplied the image to CNN.
The deployment comes as tensions remain high in the South China Sea and Chinese President Xi Jinping prepares to meet United States President Donald Trump at the G-20 summit in Japan next week. 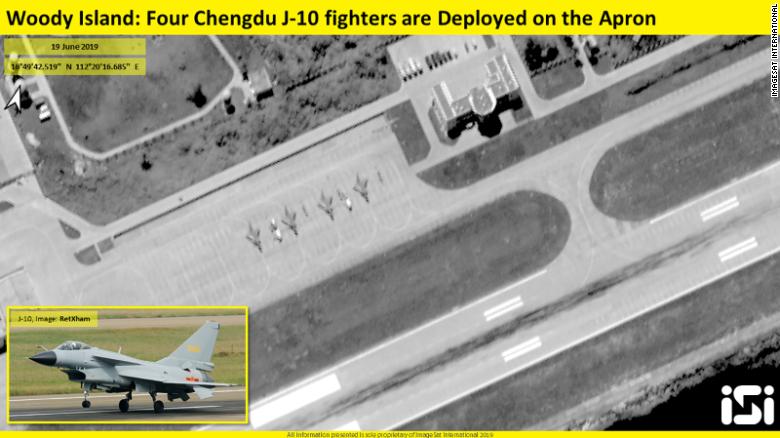 Analysts who looked at the satellite photo for CNN said both the placement of the planes out in the open and accompanying equipment is significant and indicates the fighter jets were on the contested island for up to 10 days.
"They want you to notice them. Otherwise they would be parked in the hangars," said Peter Layton, a former Royal Australian Air Force officer and fellow at the Griffith Asia Institute. "What message do they want you to take from them?"
Carl Schuster, a former director of operations at the US Pacific Command's Joint Intelligence Center, said the deployment is designed to "demonstrate it is their territory and they can put military aircraft there whenever they want."
"It also makes a statement that they can extend their air power reach over the South China Sea as required or desired," Schuster said.
The J-10 jets have a combat range of about 500 miles (740 kilometers), putting much of the South China Sea and vital shipping lands within reach, Schuster said.
The four planes are not carrying external fuel tanks, the analysts said. That suggests they were to be refueled on the island, so the plan may be to keep them there awhile. 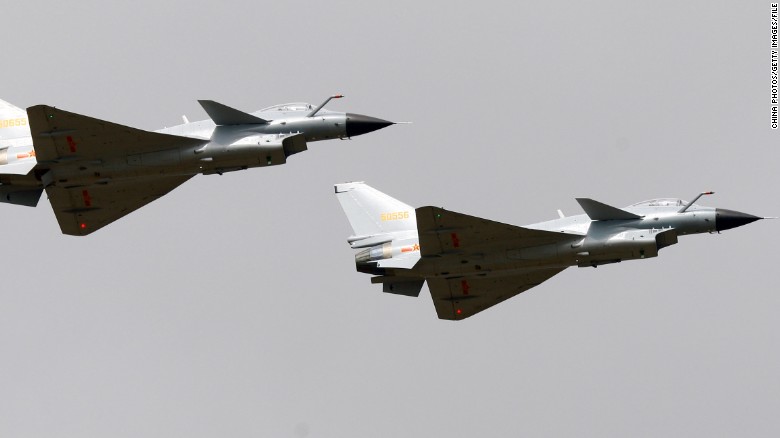 Chinese J-10 fighters fly at Airshow China in Zhuhai in 2010.
"It could be an early training deployment as part of getting the J-10 squadron operationally ready for an ADIZ (air defense identification zone) declaration," Layton said. "This activity may be the new normal."
China said in 2016 it reserved the right to
Please, Log in or Register to view URLs content!
, which would require aircraft flying over the waters to first notify Beijing. It set up
Please, Log in or Register to view URLs content!
, prompting an outcry from Japan and the United States, but the zone has not been fully enforced.
Woody Island, known as Yongxing in China, is the largest of the Paracel chain, also known as the Xisha Islands in China.

The Paracels sit in the north-central portion of the 1.3 million-square-mile South China Sea. They are also claimed by Vietnam and Taiwan, but have been occupied by China since 1974, when Chinese troops ousted a South Vietnamese garrison.
The past several years have seen Beijing substantially upgrade its facilities on the islands, deploying surface-to-air missiles, building 20 hangars at the airfield, upgrading two harbors and performing substantial land reclamation, according to the Asia Maritime Transparency Initiative.
Woody Island has served as a blueprint for Beijing's more prominent island-building efforts in the Spratly chain to the south, AMTI said in a 2017 report. 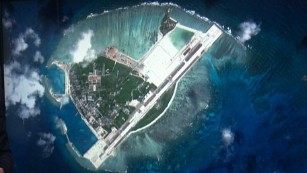 Why it's so tense in the South China Sea 01:17
The appearance of the J-10s on Woody Island comes just over a year after
Please, Log in or Register to view URLs content!
for test flights for the first time.
The PLA claimed that mission was a part of China's aim to achieve a broader regional reach, quicker mobilization, and greater strike capabilities.
"The islands in the South China Sea are China's territory," Chinese Foreign Ministry spokesman Lu Kang said after the bomber flights. "The relevant military activities are normal trainings and other parties shouldn't over-interpret them."
A military expert, Wang Mingliang, was quoted in a Chinese statement as saying the training would hone the Chinese air force's war-preparation skills and its ability to respond to various security threats in the region.
In 2017, a
Please, Log in or Register to view URLs content!
, said fighter jets -- J-11s -- were deployed to Woody Island for the first time, with the new hangars able to protect the warplanes from the island's high heat and humidity.
That report said such hangars would be useful on other Chinese islands to greatly enhance Beijing's control over the South China Sea.

Now aero stats. It would be interesting if they suspended a radar array from the Aero stat platform that would give them over the horizon capabilities without the gaps of a ground based platform possibly allowing anti surface targeting.
Y

I went on the island in late 2016, there were already J-11BHs deployed on the island, even performing interception missions, so I don't know what CNN is smoking.
T

So, US would not attack if those floating nuclear power plants are in store.
T

tidalwave said:
The best defender of those man-made island would be floating nuclear power plants, which US objected immensely. US military already has reports out regarding on scenario on bombing those islands in the future.
But if those floating nuclear power plants in the way , those would be collateral damages and would severe contamination in water.

So, US would not attack if those floating nuclear power plants are in store.
Click to expand...

You are insane, I love it.

Registered Member
Can somebody kindly tell me how many islands does China currently have structures on ? Whether military or surveillance gear , cause the south China sea is a large body of water im not being political just wondering how many islands they have under their watch
You must log in or register to reply here.