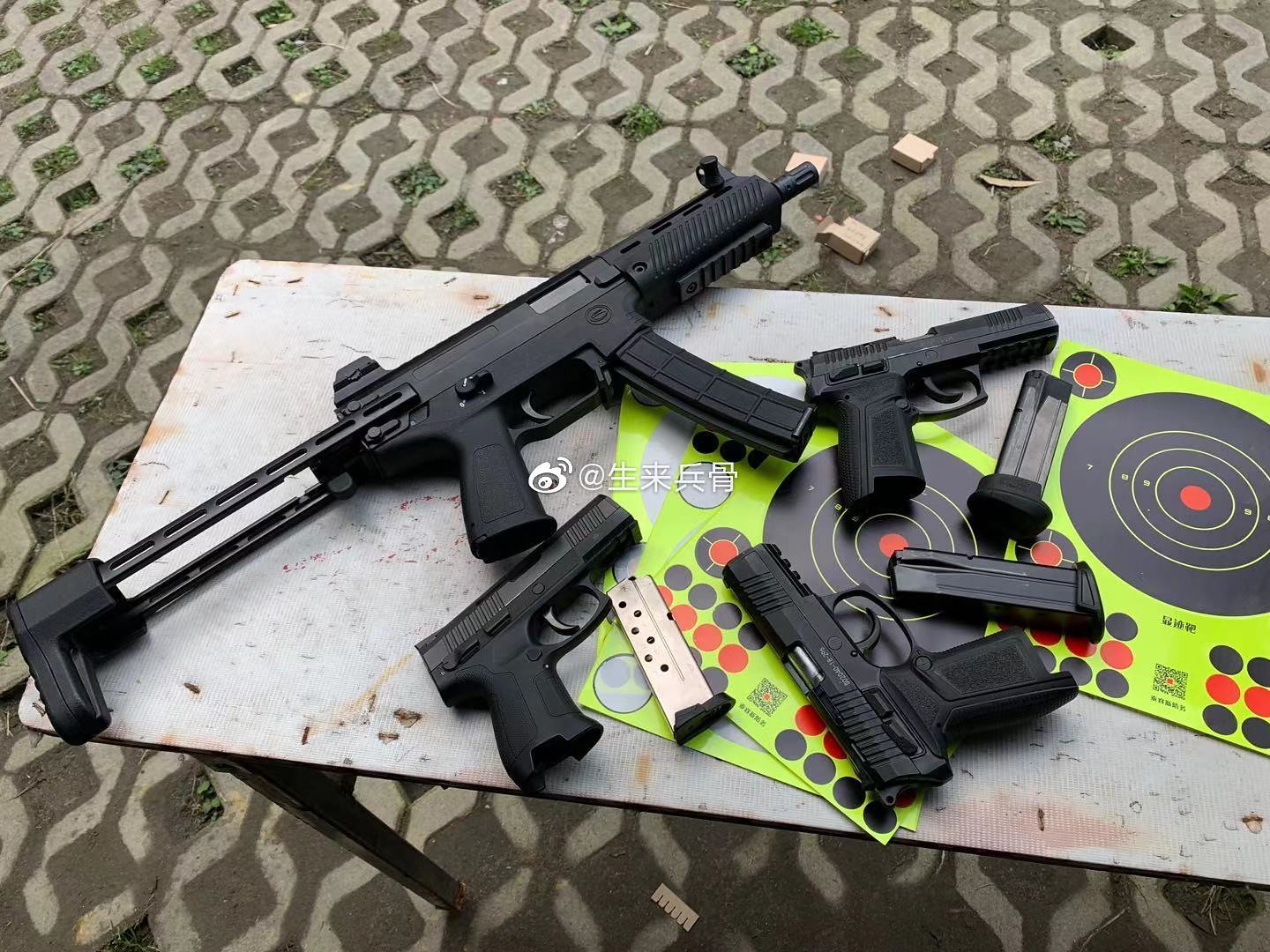 Dual stack single feed? is there a good reason to do that aside from easier design?

Registered Member
Another picture I found on Weibo.

Purpose: for close quarters self-defense, able to neutralize targets within 25 meters. Not yet in formal service, still currently in limited trials.

I think these are the internal mechanism sheets:

Registered Member
A video I found for the new pistol, machine gun, QBZ 191 with a new suppressor, and more.

QSZ193 is also quite a bit smaller than the bottom right gun, and its designs are quite different (striker fire instead of hammer).

The 3 pistols have quite a bit of common design features, which probably means that all 3 are designed by the same institute (208 I assume?).
Common features that I can observe:
1. all 3 have ambi slide release
2. all 3 have 2 sets of grooves that can improve friction on the slide, one at the front and one at the back
3. all 3 have very similar slide disassembly mechanism (notice the circle right above the trigger? On the other side of all 3 pistols, the left side, there should be a lever that can be used to detach the slide from the frame. Since this circle seems to be of the same size for all 3 pistols, I assume this part is probably interchangeable)
4. All 3 guns seem to have a barrel that is of the same color (a metallic color)
5. (not 100% sure about this) all 3 pistols seem to have a ambi safety selector at the upper rear part of the frame
6. All 3 guns seem to have ambi magazine release
7. The magazine of all 3 pistols have a pronounced base plate

Made a typo. The new pistols are the two on the RIGHT side of the image.
O

Do QSZ mean military or do police guns get that designation too? Aren't the military using 5.8x21mm? Maybe that round don't work with short barrel as it's more rifle like.

ohan_qwe said:
Do QSZ mean military or do police guns get that designation too? Aren't the military using 5.8x21mm? Maybe that round don't work with short barrel as it's more rifle like.
Click to expand...

It’s the Standard military designation. The Military are but the round likes longer barrels in standard issue. The QSZ11 uses the subsonic version.
K

The other 2 pistols seems to be this alleged QSZ92A
M

plawolf said:
Depends on the design of the mag well and grip, but I have a feeling it might not be that simple.

The choice for single stack may well be to keep the magazine slim so they can make the grip smaller.

People of Asia are still generally smaller in size than Caucasians, which may make big pistol grips with double stack magazines uncomfortable to hold for an not inconsequential proportion of troops, which may be the reason for this design choice.
Click to expand...

I really hate these racialist reasons. Same with how Japanese apparently can't handle full power 7.62x51mm even though Vietnamese who are considered even smaller and malnourished were able to handle 7.62x54r and 7x54 French .30 06 and even the big westerners preferred intermediate cartridge weapons hence widespread adoption. It always sounds like digs at the whole race as inferior for being unable to handle x or y, but nobody seems to ever talk about this supposed smallness as an advantage like being smaller targets and requiring less resources to feed. Slim grips are more comfortable for a lot of people in general, even people with big hands. It's all about getting accustomed to one or the other. I shot Glocks as my first pistols for a while and was what determined my standard for what a pistol should feel like before I fired a 1911 and I prefer the grip of the 1911.

Personally the grip doesn't seem that slim to me, so I am wondering if it can accept a double stack. I'm wondering if the barrel is a thick barrel like those on combat pistols like the NP-22 otherwise this is probably some replacement officer pistol. I wonder where stuff like NP-22 and the QSZ-92G are now, if this is getting accepted into service, are there going to be 2+ pistols in service?
O

What is the point of this gun anyways? QSZ11 is good enough for officers and combat troops would go with a full size like QSZ92. Undercover police agents? To analyze the magazine size without knowing the usecase is pointless.

Maybe this is a special combat pistol for people that find QSZ92 too large, then the single stack is reasonable.
You must log in or register to reply here.