Equation said:
Yeah but a shot down is a shot down, regardless if it's from air to air or surface to air. How often are we going to see a real air to air combat today either from within or beyond visual range anywhere in the world?
Click to expand...

By the looks of how things are shaping up in the past two decades. It is all but certain (God forbid) that we may actually be alive when that happens. Exchanges between the US-NATO and Russia-China in the Black Sea, Barent Sea, Baltic states, South China Sea, Syria and so on. It is inevitable that an air to air confrontation be it a skirmish or full scale war, would happen!

And just for the record. F15s have suffered losses from Surface to air missile systems before.

Dizasta1 said:
By the looks of how things are shaping up in the past two decades. It is all but certain (God forbid) that we may actually be alive when that happens. Exchanges between the US-NATO and Russia-China in the Black Sea, Barent Sea, Baltic states, South China Sea, Syria and so on. It is inevitable that an air to air confrontation be it a skirmish or full scale war, would happen!
Click to expand...

TerraN_EmpirE said:
And just for the record. F15s have suffered losses from Surface to air missile systems before.
Click to expand...

missile hit Saudi F-15 jet over
Please, Log in or Register to view URLs content!
.
According to Oedo it is ground launched R 27 missile
It seems to be R-27T ground launch type
Click to expand...

Flares of F-15 diverted missile Tornado destroyed but by a SAM
Yes but Houthi don't have Air Force and fighters... and Yemen AF have only Mig-29 for fired this missile so the claims is wrong it is by a SAM
They use very rustic weapons and better especialy Ballistic missiles very few accurate, Iran provide majority...

"The U.S. Army has awarded Sikorsky a contract worth nearly $200 million for 17 unique UH-60 Blackhawk helicopters for Saudi Arabia.

The terms of the deal were announced Thursday by the Department of Defense. The agreement reached between the Army and Sikorsky, a Lockheed Martin company, is worth more than $193.8 million under the terms of a firm-fixed-price foreign military sale.

Saudi Arabia is expected to receive eight UH-60Ms for the Saudi Arabian National Guard, while the other nine will go to the Royal Saudi Land Forces Airborne Special Security Forces." 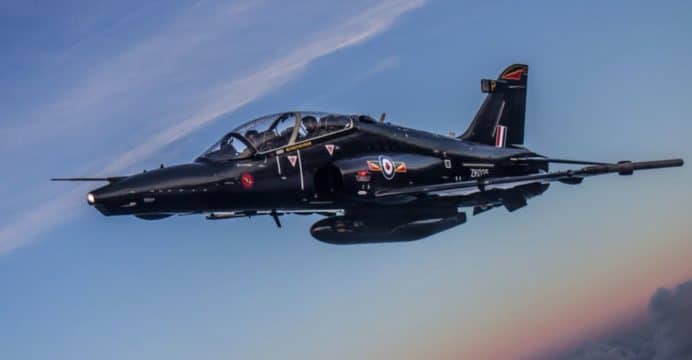 Qatari Defence Minister Khalid bin Mohammad Al Attiyah
Please, Log in or Register to view URLs content!
that it will increase its order for BAE Hawk trainer aircraft from six to nine aircraft.

Al Attiyah made the announcement at the Royal United Services Institute in London.

The Hawk trainers are part of a multi-billion-dollar arms package Qatar is buying from the U.K., which will also include 24 Eurofighter Typhoon multi-role fighters. Qatar
Please, Log in or Register to view URLs content!
the $8 billion U.S. deal in December of last year. Doha’s first payment is scheduled for mid-2018, with deliveries expected to begin in late 2022.

A unique aspect of Doha’s Eurofighter Typhoon purchase is that it also includes the formation of a ‘Joint Operation Squadron’ involving the Qatar Emiri Air Force (QEAF) and the Royal Air Force (RAF), this would see the RAF maintain a presence in Qatar.

The QEAF is likely seeking the Hawk to supplant its aging Dassault Alpha Jets, which are used for advanced training and ground-attack missions. However, this notion is contingent on Qatar procuring the Hawk 127 or Hawk 128-series, which were designed for a dual-training and combat role.

The Hawk 128 (i.e. Hawk T2) is powered by a Rolls-Royce Adour Mk951 turbofan engine, which provides a thrust of 29 kN. The Hawk T2’s cockpit environment uses three multi-function displays with a head-up display and hands-on-throttle-and-stick control interface. It has a payload capacity of 3,000 kg.

BAE Systems promotes the Hawk T2 as a robust LIFT solution in that it aims to bring the subsystems and operating environment of the RAF’s frontline fighters – e.g. the Typhoon – to trainer, acclimating pilots to their next training step (operational conversion) earlier.

Qatar’s procurements from the U.K. join other multi-billion-dollar deals, including a purchase of 36 Boeing F-15QA and 36 Dassault Rafale (originally 24, but in December 2017 it
Please, Log in or Register to view URLs content!
its option for another 12). Overall, Qatar is pursuing a defence modernization roadmap of qualitative and quantitative enhancement.

it's hot down there:
U.S. Navy Denies Iranian Drones Chased Away Destroyer Near Gulf of Oman
Please, Log in or Register to view URLs content!

Navy officials are pushing back against claims that a U.S. destroyer was chased away from an Iranian military combined exercise in the Gulf of Oman by naval forces.

On Monday, Iranian state-controlled press reported that Iranian unmanned aerial vehicles chased away a U.S. ship and another warship that were too closely monitoring two days of exercises near the Makran coast, close to the Gulf of Oman.

“This morning and in the first hours of the drills, two warships of the coalition which had approached the drills zone to monitor the Iranian Navy units were identified by the Navy drones,” Rear Admiral Seyed Mahmoud Moussavi told the state-controlled Fars news service.
“After declaring the issue to the drills’ tactical base, the patrolling and reconnaissance planes flew over the coalition warships and warned them and the warships left the drills zone.”

In a statement to USNI News, U.S. 5th Fleet spokesman Cmdr. William Urban said the actions of the Iranians did not effect U.S. operations in the region.

“One U.S. warship operating in the Gulf of Oman received a transmission from Iranian maritime forces announcing an Iranian exercise,” Urban said in a statement.
“The U.S. warship continued to execute its mission and did not alter operations as a result of the radio transmission.”

5th Fleet did not specify what U.S. ship was involved, but a U.S. defense official told USNI News on Tuesday the ship was the guided-missile destroyer USS Higgins (DDG-76). Higgins is assigned to the Theodore Roosevelt Carrier Strike Group that is operating in the Middle East as part of Operation Inherent Resolve.

An Iranian drone came within 200 feet of an F/A-18E Super Hornet attempting to land on the aircraft carrier USS Nimitz (CVN-68) on Aug. 8, 2017. Less than a week later, a second unmanned aircraft came within 1,000 feet of the carrier.
Click to expand...

How the Saudis Drag the US into Perpetual War in the Mideast
Please, Log in or Register to view URLs content!


just one sentence about money? "Signing
Please, Log in or Register to view URLs content!
arms-sale deals with the Saudis—as Trump did this past year—only contributes to the bad optics."
LOL the author was coy, so I'll say it: Saudi Ariabia has been bonanza
Oct 9, 2016

Kuwait has informed the US that it plans to go ahead with the purchase of 40 F/A-18E/F Super Hornets, a Kuwaiti daily reported on Wednesday.

Specialised military committees will follow up on the details of the purchase of the fighter jets, and their maintenance, training and spare parts, Al Rai reported.

In November 2016, the State Department said it had approved the sale, explaining it “will contribute to the foreign policy and national security of the United States by helping to improve the security of a major non-Nato ally that has been, and continues to be, an important force for political and economic progress in the Middle East”.

“Kuwait is a strategic partner in maintaining stability in the region. The acquisition of the F/A-18E/F Super Hornet aircraft will allow for greater interoperability with US forces, providing benefits for training and possible future coalition operations in support of shared regional security objectives,” the State Department said.

According to the State Department, Kuwait will have no difficulty absorbing this aircraft into its armed forces.
Click to expand...