asif iqbal said:
OUTSTANDING concept!! and look forward to seeing it operational a lot to cover on this new way of off loading equipment at sea

So can the AFSB transfer equipment to the MLP?

Also can AFSB take equipment from RORO using a ramp?
Click to expand...

yup. I like to think of it as a modern take on the Mulberry Harbour of D day. those were artificial harbors built in prefab sections that allowed the Allies unload equipment and personal on too normandy once the beach head was established.
here these ships act as peres allowing rapid and direct unloading of gear and shift to the connector.

Well, let's talk about this a bit.

These vessels are going to be the replacements for the US Navy's current LSDs.

However, the Navy has decided to base this replacement on the current San Antonio LPD hull form.

This is a smart move because it will make use of a modern hull form that is already being built and will extend that building and the work and expertise associated with it.

The same hull is being actively considered for a escort vessel carrying the very large AMDR radar variants that would not fit on the Burke III. In essense, the result would be a large, arsenal ship-like vessel...but making use of the good hull form in another way.

Time will tell what all uses they find for this hull...but clearly the US Navy likes the hull form itself.

Herre's the text of the US Naval Institute Article:


USNI said:
NORFOLK, VA — Early design work on the Navy’s next generation amphibious warship — based on the San Antonio-class (LPD-17) hull — has begun ahead of a planned 2020 procurement, Navy officials said on Wednesday.

The design work for the LX(R) after a longer-than-usual back and forth on the analysis of alternatives (AOA) discussion for the future class of 11-ships with a request for proposal to industry due out in 2017, said Capt. Erik Ross with Office of the Chief of Naval Operations amphibious warfare division (OPNAV N95).

The Navy’s effort to replace the aging Whidbey Island and Harpers Ferry 16,000-ton landing ship docks (LSD-41/49) is focused on driving cost out of the new class at the direction of the Navy’s chief shipbuilder, Sean Stackley, Assistant Secretary of the Navy for Research, Development & Acquisition (RDA), Ross said.

“The whole reason the AoA was paused was for us to get smarter on cost estimates earlier,” Ross told reporters during NDIA’s Expeditionary Warfare Conference.

“Historically ship building programs they go along and they cost more and the [Chief of Naval Operations] and Mr. Stackley said, [no].”

The lead ship of a San Antonio derived LX(R) would cost about $1.64 billion with follow-ons costing about $1.4 billion for a total of 11 ships, according to information from the service.

Last month the service decided to use the LPD-17 hull as the basis for LX(R), according to a memo signed by Secretary of the Navy Ray Mabus. That decision was largely based on the trend of the three ships that comprise the Navy and Marine Amphibious Ready Group/Marine Expeditionary Unit (ARG/MEU) operating more independently as disaggregated forces, Ross said.

“One of the reasons that CNO leadership elected to go forward with a LX(R) that’s a LPD-17 derivative is the capacity, capability and flexibility and the ability go off with that aviation capability and command and control,” Ross said during a conference briefing.

“It’s incredibly important when you don’t have as many assets that you can distribute worldwide but the ones that you do have more capability for independent operations.”

The capabilities to assist in more independent operations include a permanent hangar for aviation maintenance and better command and control systems than the current LSDs.

“We want that capability [for LX(R)]. We don’t want the LSD capability — that was really just a truck to always be married up with ARG and never go away from it,” Marine Maj. Gen. Robert S. Walsh, Director Expeditionary Warfare Division (N95), told USNI News on Wednesday.

Now the San Antonio hull has been selected as a template for the design, the service is now working to squeezing cost out of the LX(R) ship-class.

“How can you get a lot of the great things you have in that LPD-17 hull form but at less cost,” Walsh said.
“We really tried to look hard at driving cost out as low as we could get and see what capabilities we can buy back in. We’re continuing to work this.”

Part of the effort will examine what level of military specification (MILSPEC) equipment will be included in the design, Ross said.

“There’s a trade in terms of reliability, survivability and cost and then more efficiently buying things that are less expensive that can be placed in the right part of the ship in terms of design,” Ross said.

“Do you need all the pumps and valves and motors on the entire ship to be MILSPEC? Or can you target them in the areas that need to be more survivable? There’s a trade and a tension there. If all of the backup systems, prime movers and associated machinery — whether it’s sea water cooling power and everything else that directly supports main propulsion — are all hardened ruggedized and high end systems, that’s good. Do you need to do that throughout the entire ship? Maybe not.”

As part of the effort, the Navy has been in consultation with the two shipyards most likely to compete for the LX(R) business — General Dynamics NASSCO and LPD-17 builder Huntington Ingalls Industries (HII), Walsh told USNI News.

“Both HII and NASSCO were helping with ideas on how to drive cost down,” Walsh said.

“When I say competition, we’d look at anyone who could compete and plan it, but those would certainly be two shipyards that would have the ability to compete in this environment.”

“We’re so far ahead of the game normally in where we’d be in a ship like this with all of the hard work really on the acquisition side,” he said.
Click to expand...

asif iqbal said:
OUTSTANDING concept!! and look forward to seeing it operational a lot to cover on this new way of off loading equipment at sea

So can the AFSB transfer equipment to the MLP?

Also can AFSB take equipment from RORO using a ramp?
Click to expand...

The AFSB has the same ramping capabilities as the MLP. It just does not have the LCAC lanes, but does have the large landing deck and hanger.

They will look and operate very well.

As I said, modify her capabilities and sensors for the LSD role and out they pop, using the same LPD hull.

I will copy your post to the US Military News thread. 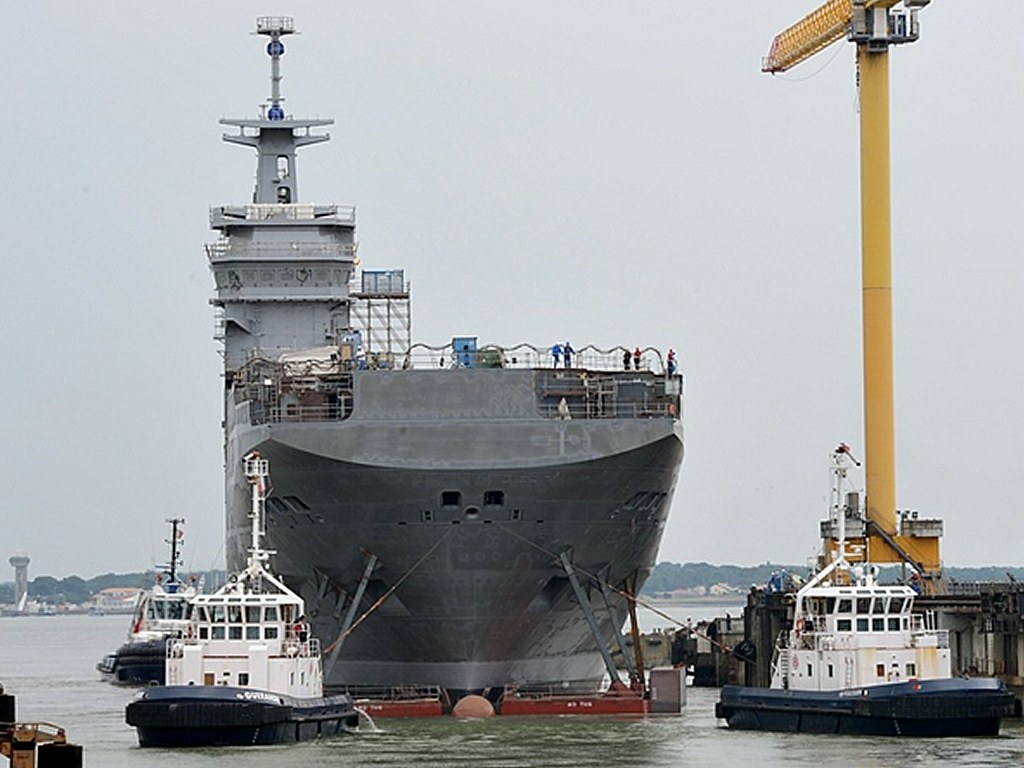 Sevastopol is one of two Mistral-class vessels ordered by the Russian Navy.

The $1.6 billion deal for two Mistral-class ships for the Russian Navy was announced in December 2010, but encountered difficulties in September 2014, when French President François Hollande announced the halt of delivery of the first warship, Vladivostok, due to Moscow’s alleged involvement in the Ukrainian crisis.

A number of NATO countries, primarily the United States, the United Kingdom, Germany and Poland, have repeatedly tried to persuade France not to deliver the Mistral-class ships to Russia.

The Mistral-class helicopter carriers are 199 meters long, 32 meters wide and can reach a maximum speed of 29 knots. With a displacement of 22,600 tonnes, the vessels can carry up to 481 passengers, as well as 16 helicopters, four landing craft and 70 armored vehicles, Russia Beyond The Headlines writes.
Click to expand...

As far as I understand, France still has an indefinite hold on the delivery of both of these vessels. The first, the Vladivostok already completed builder's sea trials.

Staff member
Super Moderator
Hmmm...I thought Turkey was going to base F-35Bs on its LHD and go that route for the time being. Is this saying that they plan a dedicated CV as well?

The picture at the site, and the German make it pretty clear (to me at least) that they may be talking about their LHD.

My understaning of the articles is also that they simply decided to add a sky jump to those LHD vessels, making them carriers now. While the modification will provide some extra max TOW, and therefore some expanded capability, calling it a full CV instead of a LHD is perhaps some marketing as well.
You must log in or register to reply here.
Share:
Facebook Twitter Reddit Pinterest Tumblr WhatsApp Email Link
Top