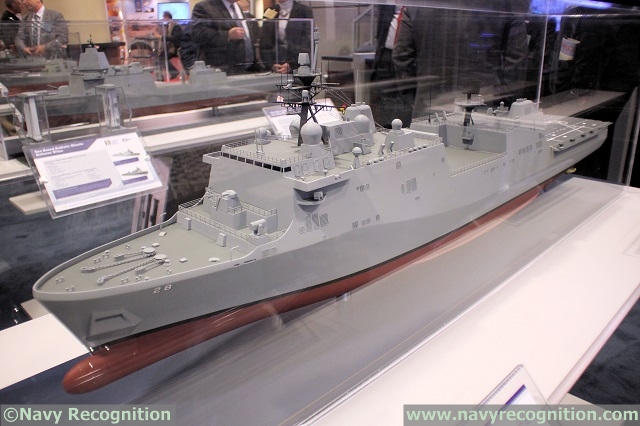 Hmmm...looks like they are preparing to go to the new LX(R) design where the same LPD hull will be used without the integrated masts and with other modifications for the LX(R) requirment.

LPD 28 looks like sort of a bridge vessel between the LPD_17 and the LX(R).

The following is the concept art for the LX(R), and it looks a lot like that LPD-28 model.

Registered Member
No large but with US AA ships

Mobile January 15, 2016 - Austal Limited is pleased to announce that Expeditionary Fast Transport 6 (T-EPF 6) was delivered to the U.S. Navy on January 14 during a ceremony aboard the ship at Austal USA’s shipyard in Mobile, Alabama, USA.

The delivery of the USNS Brunswick (T-EPF 6) marks the first ship in its class Austal has delivered to the Navy in 2016.

“The EPF program is now mature and stable. The entire team at Austal USA has much to be proud of in achieving this. It’s a great ship and a great program,” Mr Bellamy said.

Three additional EPF, formerly Joint High Speed Vessels (JHSV), remain under construction in Mobile as part of a 10-ship, US$1.6 billion block-buy contract from the U.S. Navy. The future USNS Carson City (T-EPF 7) will be christened in January 2016 and will launch soon after, while modules for Yuma (T-EPF 8) and City of Bismarck (T-EPF 9) are under construction in Austal’s module manufacturing facility. Construction of Burlington (T-EPF 10) is expected to begin later in 2016.

T-EPF 11 and 12 were fully funded by Congress in the 2015 and 2016 Omnibus Appropriations Bills. Shipbuilding contracts for EPF 11 and 12 have not yet been finalised however the Navy awarded Austal a $54 million contract in October to fund long lead materials for T-EPF 11.

The ship was transferred from the land level facility to the drydock, which was then flooded allowing her to float off the blocks.

"Every milestone in the construction of a ship is significant, but seeing the ship float out of drydock is visually one of my favorites," said Capt. Darren Plath, LPD 17 Class Program Manager, Program Executive Office (PEO), Ships. "I'm looking forward to sea trials, delivery and other exciting milestones."

The ships are designed to support embarking, transporting, and landing elements of over 800 Marines with both a flight deck which accommodates CH-53 helicopters and MV-22 Osprey tilt-rotor aircraft, and a well deck that can launch and recover landing craft and amphibious vehicles.

Portland will be the 11th San Antonio class ship delivered by HII which is also currently in the final stages of production on the future John P Murtha (LPD 26).

As one of the Defense Department's largest acquisition organizations, PEO Ships is responsible for executing the development and procurement of all destroyers, amphibious ships, special mission and support ships, and special warfare craft.
Click to expand...

The 12th San Antonio class, LPD-28, has been funded and will soon start building. Huntington Ingalls has shown a model of it that indicates it will be a bridge to the new LX(R) design.

The LX(R) design, which will follow and will be based ont he same hull, is meant to replace the LSD vessels currently in US service. They will be a smaller displacement, but with the same type of well deck. 12 of those are planned. Like so:

I found the following illustraiotn of the changes from LPD-17 to the LPD-17 Flight II / LX(R), don't know how accurate that still is: At least it's going to streamline the in-service hulls. Waiting to see what that hull will become after LX(R) ...

Registered Member
He look very good and accurate hehehe :=) remenber when i have posted some month ago Jeff in excitement

Ofc Scratch you can' t remenber all

Scratch said:
I found the following illustraiotn of the changes from LPD-17 to the LPD-17 Flight II / LX(R), don't know how accurate that still is:

At least it's going to streamline the in-service hulls. Waiting to see what that hull will become after LX(R) ...
Click to expand...

I believe that is very close, if not spot on.

I am glad to see this. Using the same hull but making these changes to create an LSD replacement is a very smart move.