VIP Professional
Japan is shrinking in population. I wonder what the population will level out to be in say 50 to 60 years?

bd popeye said:
Japan is shrinking in population. I wonder what the population will level out to be in say 50 to 60 years?
Click to expand...

not sure why you didn't click the link I posted Today at 1:48 PM to see: 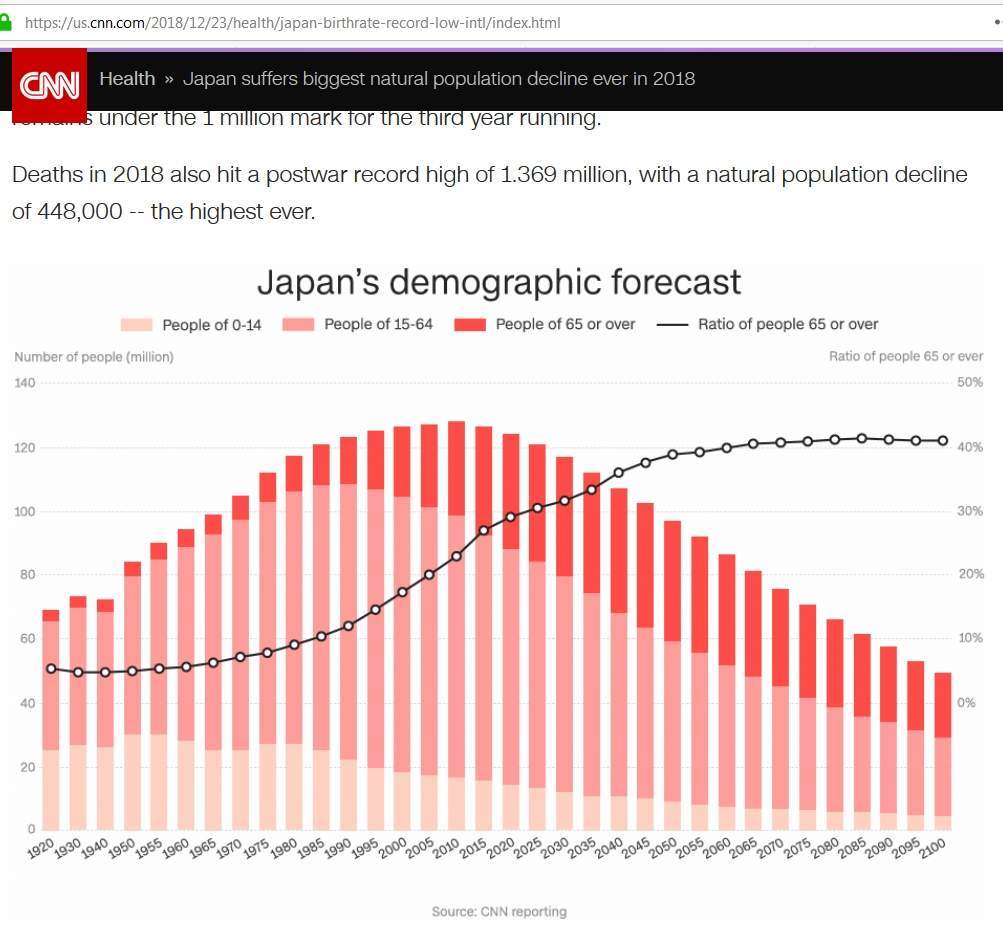 A war of nerves between South Korea and Japan over a South Korean warship’s radar search operations could be a sign of increasing tensions, as the countries reposition military operations in the region, military experts say.

The episode, in particular, coincides with South Korean military’s
Please, Log in or Register to view URLs content!
to threats posed by neighboring countries, including Japan.

On Dec. 20, a 3,900-ton class KDX-I destroyer of
Please, Log in or Register to view URLs content!
allegedly locked its separate target illumination radar, or STIR, on a P-1 patrol aircraft of the Japanese Maritime Self-Defense Force, while the ship was searching for a North Korean fishing boat in distress in the eastern waters off the islets of Dokdo.

Directing the fire control radar at a target can be regarded a step away from actual firing. Japan’s military and diplomatic authorities have made a strong protest with the South Korean counterparts against the radar operations, which they call “extremely dangerous,” But Seoul’s Ministry of National Defense has denied the destroyer used the target radar, saying the ship used a three-dimensional radar. The ministry later admitted the ship operated a camera attached alongside the radar to look for the North Korean boat.

The latest incident is a sign of confrontation between America’s two closest allies in the East Asia, said Shin In-kyun, head of Korea Defense Network, a Seoul-based defense think tank.

“The incident came at an awkward time when the relations of South Korea and Japan hit the lowest ebb over territorial and historical disputes,” Shin said. “I’m worried if the worsening relations of Seoul and Tokyo could hamper trilateral defense cooperation with the U.S. in the region,” the analyst said.

Just a week before the radar face-off, South Korea staged annual drills to defend the Dokdo islets, mobilizing battleships and combat airplanes. The exercise triggered an angry backlash from the Japanese government.

According to officials of Seoul’s Ministry of National Defense,
Please, Log in or Register to view URLs content!
for the first time in the soon-to-be-published 2018 Defense White Paper. Instead, the biennial paper is to describe the term of enemy as “every force that threatens the lives and property” of South Korea.

Ahn Seung-beom, a military analyst and publisher of The Defense Times in Seoul, expect South Korea’s military buildups to be accelerated with a focus on responding to potential threats by neighboring countries, particularly Japan.

“I believe the radar issue was just a strange happening, but the situation offers a glimpse of situations the two forces potentially could confront sometime in the future,” he said.
Click to expand...

Japan Defense Ministry had released a video of the incident taken by the P-1 crew.


You can see that the SK navy's Defense Ministry's claim is false.
O

SamuraiBlue said:
Japan Defense Ministry had released a video of the incident taken by the P-1 crew.


You can see that the SK navy's Defense Ministry's claim is false.
Click to expand...

Could you explain where exactly it PROVES the SK Navy's Defense Minister's claim is false??

Also is there PROOF that the Korean warship was indeed in Japanese waters/ EEZ? The video is only from Japanese perspective and for all we know, this footage could have been taken in the middle of the Indian Ocean (of course it isn't) but how are we to blindly just trust what the Japanese crew are saying to each other and it is only the Japanese crew claiming to be painted by FC radar.

If it is indeed SK warship violating Japanese waters without announcing itself and then actually painting the Japanese patrol aircraft with FC radar, that would be the Koreans at fault here. I'm just wondering where the actual evidence to suggest this is... not doubting it necessarily. Suffice it to say, one group's claim and own video footage isn't exactly evidence.

SamuraiBlue said:
Japan Defense Ministry had released a video of the incident taken by the P-1 crew.


You can see that the SK navy's Defense Ministry's claim is false.
Click to expand...

thanks for sharing, cool to watch in the middle of Europe LOL 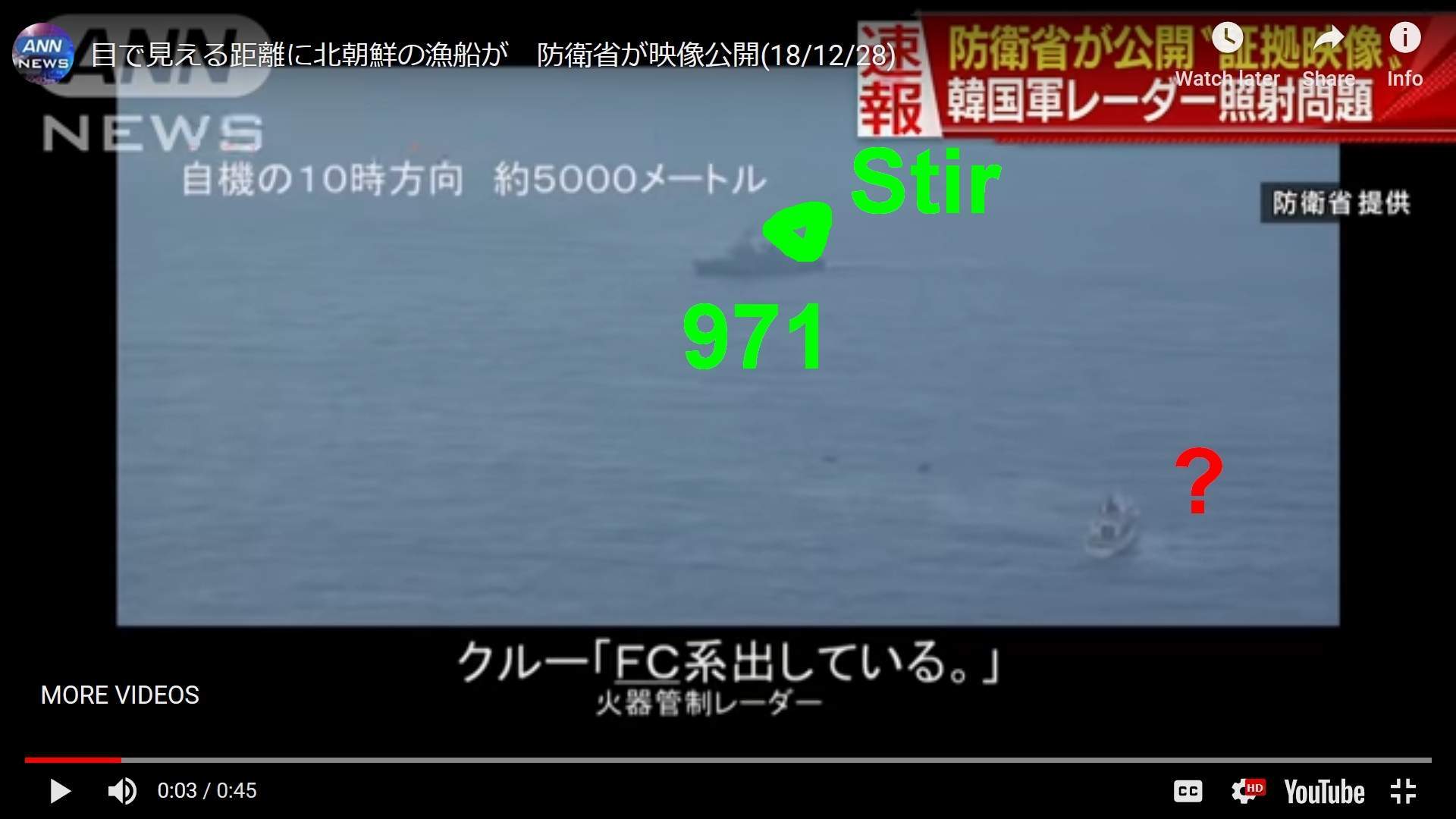 what's the ship where I put the red question mark?

I seriously doubt that South Korea and Japanese incident is anything more than hype by the media. If anything, South Korea is too smart not to know that it cannot tangle with Japan. And that's not because Japan is too powerful, for it were, American troops would be situated only in South Korea. Another reason why this incident and other like it, shouldn't be taken seriously. For any country, that hosts military bases, hardware and troops of America. Is not really in any position pick and choose who their enemies are. And in this case, Japan and South Korea have neither the option or the freedom to choose it's enemies. Let alone chalk out strategies based on such a premise.

Best case scenario, the incident was probably born out of misunderstanding, miscommunication, or confusion. Japanese know very well that they do not have a choice on the matter of South Korea being regarded as an enemy. America makes sure, that it's allies tow Washington's line, or suffer the consequences. So for me, this story about SK & Japan coming close to war .... thrown in the trash.

Jura said:
thanks for sharing, cool to watch in the middle of Europe LOL

what's the ship where I put the red question mark?
Click to expand... 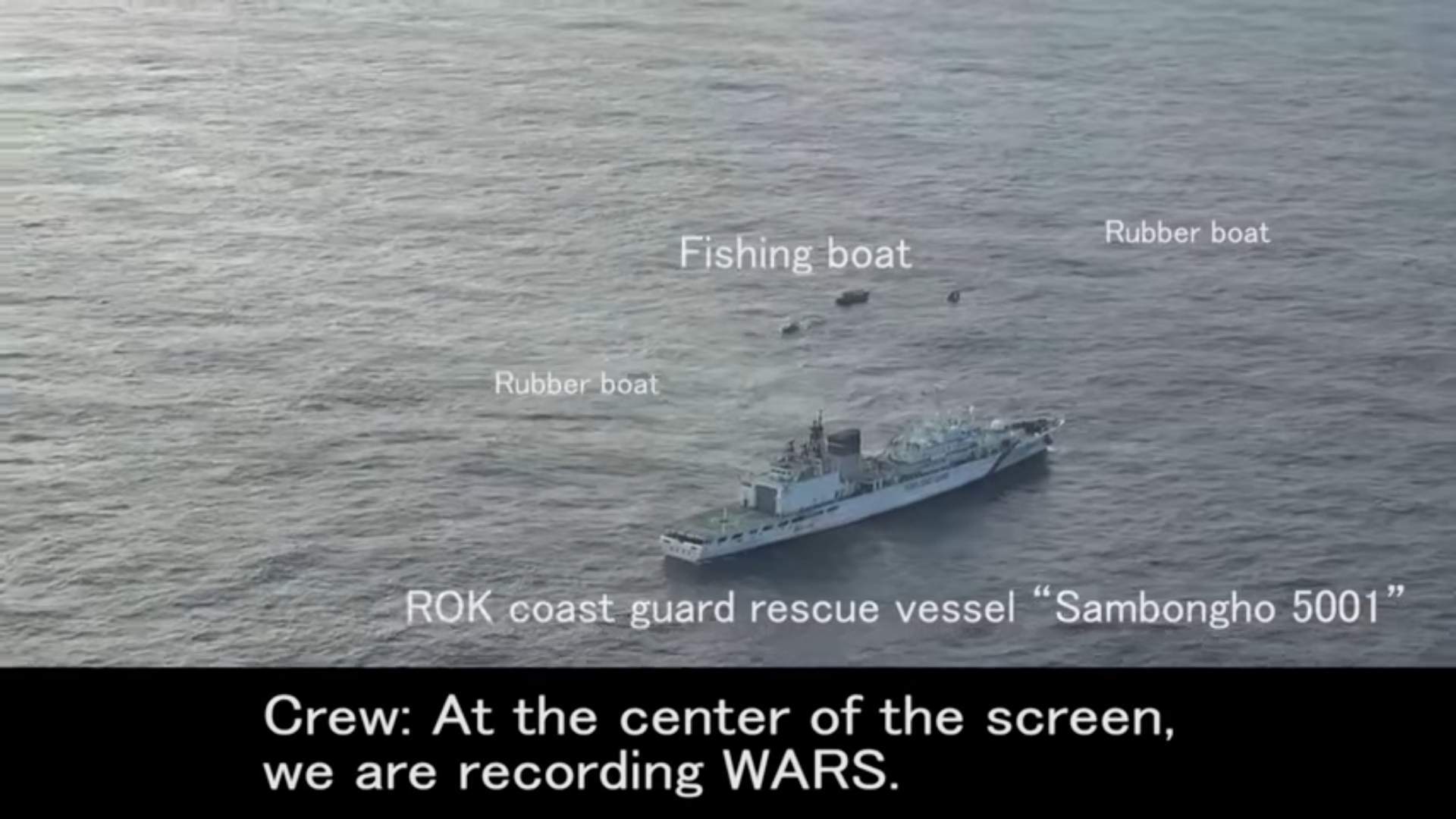 in
which I've now noticed inside
Japan releases footage of South Korean destroyer’s radar lock-on on JMSDF patrol plane
Please, Log in or Register to view URLs content!
and am in the process of watching 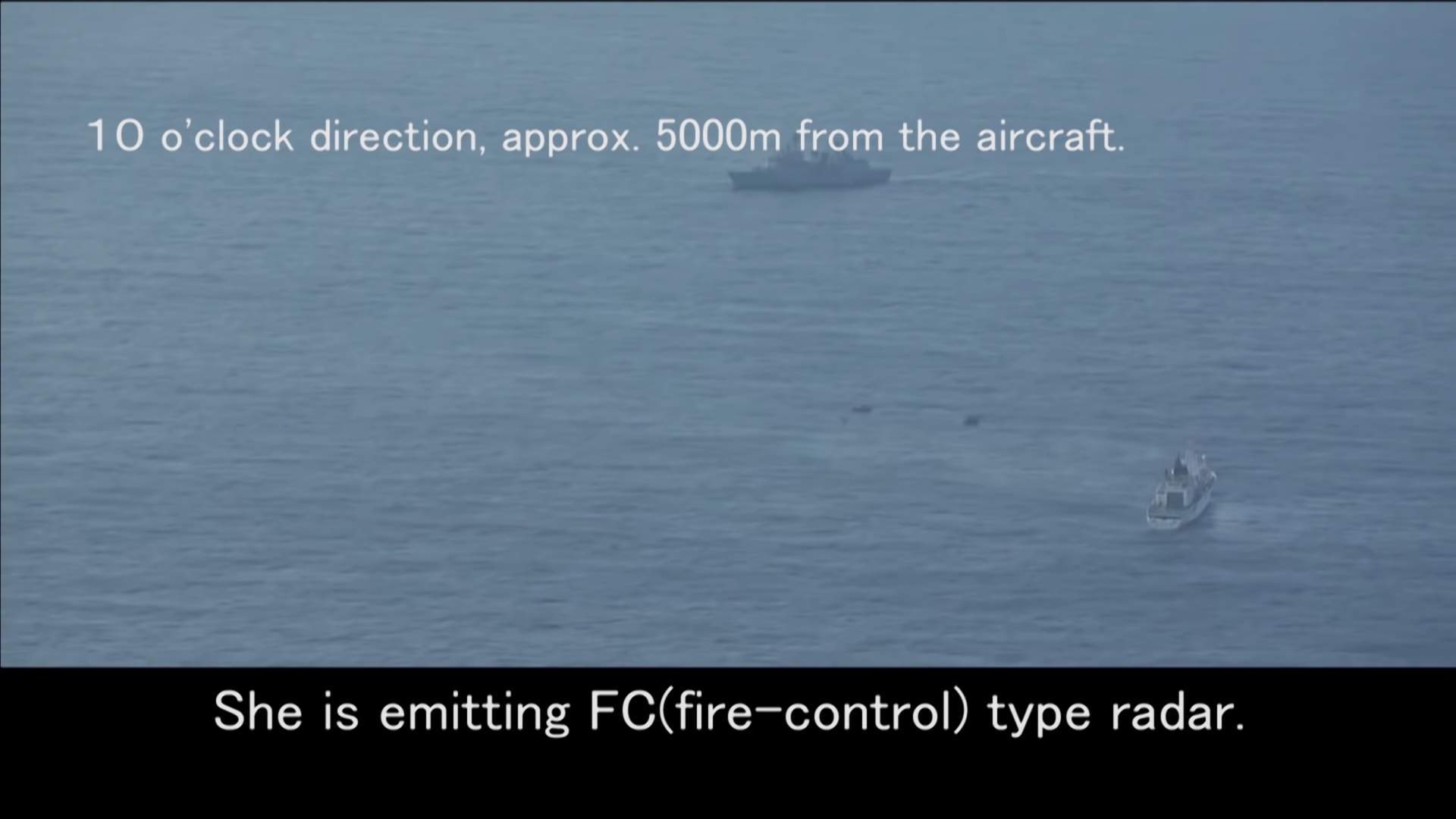 Dizasta1 said:
I seriously doubt that South Korea and Japanese incident is anything more than hype by the media. If anything, South Korea is too smart not to know that it cannot tangle with Japan.
Click to expand...

Well I doubt the ROK destroyer was under orders to do what it did, or that many other people would like that was the case. More likely it was a dick move by the captain or another officer being overly aggressive. The issue in my mind is (apparently):

1. The destroyer not replying to radio hails, even to say "sod off and leave us alone" or "sorry, fat-finger on the radar, won't happen again"; and
2. The ROK government denying anything happened.

Japan-ROK relations have cooled again in the last year, so arguably an incident like this could have been useful for Seoul just to explain what happened and that it wasn't intentional, in doing so reassuring Tokyo about its neighbour's behaviour.

By having a sort of blustery response, it increases the chances of a misunderstanding sparking a violent response. E.g. another Japanese plane also gets what it thinks is a radar lock and opens fire believing its about to be shot down. Probably an unlikely scenario, but something still now more likely than it was before.
You must log in or register to reply here.