minusone said:
found a thread in tieba baidu that revealed the development history of ws-13e~~

Quick english translation via DeepL for those of us that can't speak chinese.

In 2007, when Chengfei began to deliver FC-1 fighter aircraft for Pakistan, at that time, India, in order to prevent Pakistan from obtaining FC-1, directly exerted diplomatic pressure on Russia, demanding that Russia should not export RD-93 engines to Pakistan, India is a major Russian arms importer, Russia quickly expressed support for this request to India, when China and Russia had a heated argument over this. Later, after negotiations Russia agreed to export the RD-93 to China first, and then by China to a third country. The matter was resolved, but only then did the Chinese Air Force suddenly wake up to the fact that it did not have a usable medium-powered aircraft in its hands and was stuck in the neck. At that time, the WS-9 Qinling used by the J-Bomb-7 was still the second generation of medium thrust, with a thrust-to-weight ratio of only 5, which was really old.

The Chinese Air Force immediately set out to solve the problem at hand, and in 2007, a project was set in motion for the independent production of the RD-93 engine by Liyang. In fact, as early as 1992, when the Su-27 was introduced, China used a very small amount of money to cause a full set of technical information of the RD-33, which was not installed in China at that time, and was introduced only to open eyes or as a technical reserve, so the RD-33 actually had no secrets to China. After receiving the task, Liyang quickly modified a WP-13 turbojet production line and ordered part of the production process equipment from Russia, and Russia also helped train technicians and part of the workers. Most of the parts of the prototype were identical to those of the RD-33, some of them were improved, and some of them were newly developed by Liyang. On March 18, 2010, the first ground run of the FC-1 with WS-13 was successful, and the first flight was successful in 2011.

Almost at the same time, Shenfei started the FC-31 project and asked Liyang to provide an advanced medium thrust engine, but in a hurry, Liyang had no engine to provide to Shenfei. The engine of the 1970s, the basic design is very backward, as long as the contemporary advanced bearings, blades and other components for small changes, you can make the engine life, thrust, etc. greatly increased, while the weight is greatly reduced. And Li Yang actually has an advanced medium thrust engine related technology in hand, is the previous development of ten years of WS-12 Tianshan, WS-12 although halfway dead, but it is far more advanced than RD-33, Li Yang decided to use the advanced technology of WS-12 to improve WS-13. and at this time the Russian Klimov Design Bureau also need to improve the RD-33 to equip Mig-35, the two sides The two sides decided to cooperate immediately.

First, Liyang replaced the four-stage fan of the RD-33 with the three-stage fan of the original WS-12. The new fan shortened the engine length by 44 mm, increased the flow rate by 6 kg per second, increased the maximum thrust to 9.06 tons (88.94 KN), and made it lighter in weight. The second step was to use a new low-pressure turbine jointly developed by Liyang and Klimov, which could increase the operating temperature by 70 degrees and work more efficiently, and could also make better use of the potential of the new three-stage fan. After the completion of the improvement, the maximum thrust of 9.28 tons (91.1KN). Here Klimov also switched to the three-stage fan solution of WS-12, with the new low-pressure turbine launched the model RD-33MKM; the third step, Liyang redesigned the new combustion chamber based on the original WS-12 combustion chamber, the original RD-33 combustion chamber is too backward, poor oil rich combustion to the final efficiency is low, so it will always smoke thicker, modified the new combustion chamber of WS-13 The fourth step, Klimov used single crystal turbine blades to replace the original directional solidification blades, which allowed the turbine operating temperature to increase by another 50-70 degrees, the engine thrust reached 9.5 tons (94KN), thrust to weight ratio of 8.6, overhaul The interval is more than 1000 hours and the total life time is more than 3000 hours. The third and fourth steps were completed simultaneously by Liyang and Klimov, respectively, and the RD-33 improvement has been renewed up to this point, with the Russian model RD-33MKN, equipped with Mig-35, and the Chinese model WS-13E, equipped with FC-1 and FC-31, with WS-13E having successfully made its maiden flight on July 1, 2016, equipped with FC-31 proving aircraft. Perhaps because of the use of very much of the original WS-12 technology, perhaps because of the resentment of the WS-12's untimely death, Li Yang insisted on naming the WS-13 "Tianshan 21", especially after the word Tianshan also added a 21, which is the original Tianshan WS-12's number in reverse, implying that this is a "In the eyes of Li Yang, this may also be for the military's indignation at the abandonment of Tianshan, later in the air force deputy commander Lieutenant General Ma Xiaotian direct intervention to rename WS-13 to "Taishan".

Bltizo said:
For 076, we don't know what kind of configuration it will actually have.

We expect EM catapults and arresting gear -- there's a good chance it may have an angled flight deck.


Agree with the rest though, and also in general my point about the logic of operating large fleets of UAVs and loyal wingmen drones from naval aviation platforms remains.
Click to expand...

Is there an integrated ladder also?

Andy1974 said:
Is there an integrated ladder also?
Click to expand...

I think this is not unlikely, but given the low quality I don't know how we should this on this single image

The larger wings make it very raptoresque from this angle.
K

Andy1974 said:
Is there an integrated ladder also?
Click to expand...

Looking at the location of ladder on F-35 it's possible that J-35 also has integrated ladder. 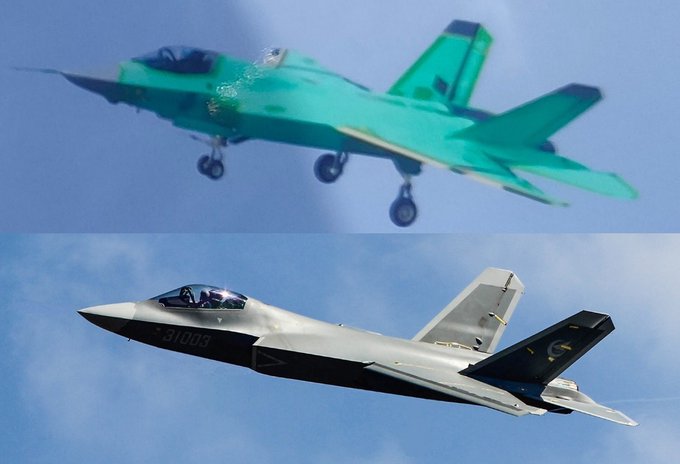 siegecrossbow said:
The larger wings make it very raptoresque from this angle.
Click to expand...

FC-31/J-XY always was very Raptorish. Which is kinda logical for a twin-engine aircraft.
Which was kinda funny, because everyone was (and still is) running around with that "f-35" banner due to overall visual resemblance while ignoring most of the actual design choices...
S

Key features of the PLAN’s stealth fighter will likely include significant internal fuel capacity, large wing area, good wing folding reduction (note how well the J-15 “folds”), and internal weapons storage of at least 4 x AAM or 2 x AAM and 2 x land attack weapons. If based on the F/C-31, it is likely the new aircraft will have a larger wing area (and greater span) and possibly slightly longer fuselage. However, the PLAN will not want the aircraft to be too large due to the impact on hangar storage and deck operations, something they have learned from operating the J-15 and which will likely remain a key platform for the CATOBAR carriers. The new aircraft will likely have larger physical dimensions than the F-35C but smaller than the F-18E.

Recent photos suggest a bulkier fuselage aft of the cockpit, providing addition space for fuel or avionics. It is still difficult to determine wingspan and folded wind area or internal weapons bay from the latest photos.

Based on an evolution from the FC-31, and rough estimate of the aircraft elevator dimensions of carrier 003, it is possible that the new Navy Stealth Fight has broadly the following dimensions:

Kejora said:
Looking at the location of ladder on F-35 it's possible that J-35 also has integrated ladder.

While it is possible to include a ladder, I think that the engineers will try to shave off as much unneeded weight as possible until WS-19 is ready.
You must log in or register to reply here.