Please, Log in or Register to view URLs content!
about this:
Russia Risks Being Prosecuted for Syria's War Crimes

Now that the Russian government is openly aiding the Syrian army, Russian officials all the way up to President Vladimir Putin could be prosecuted for abetting war crimes, according to former U.S. officials and international law experts.

Experts on war crimes prosecutions say that by supporting the army behind these crimes, Russia has opened itself up to the charge of “aiding and abetting” war crimes. It is a young and evolving area of international law, used successfully to prosecute the prime minister of Serbia for atrocities in the former Yugoslavia and to prosecute Liberian President Charles Taylor for helping the Revolutionary United Front and Armed Forces Revolutionary Council during Sierra Leone’s civil war.

Any accountability for war crimes in Syria is probably years away, and Russia has
Please, Log in or Register to view URLs content!
efforts to refer the Syria charges to the International Criminal Court. But if a prosecution happens, the experts say, Putin could be held responsible just as Taylor was.

“The Russians are walking into a situation where they could be held criminally responsible,” said Stephen Rapp, who served as the United States ambassador at large for war crimes from 2009 until this year. “If you aid the Syrian air force in committing war crimes such as dropping barrel bombs on civilians, you can find yourself held responsible right up to the top, including President Putin.”

Rapp, who previously was chief of the International Tribunal for Rwanda and the Special Court for Sierra Leone, said that there is precedent for holding a head of state criminally responsible for aiding forces in another country that are committing war crimes. Taylor was sentenced to 50 years in a British prison for, among other things, “aiding and abetting” the Revolutionary United Front as it massacred civilians.

The Russian aid to Syria doesn’t actually have to be used in the war crimes for criminal liability to kick in, Rapp said. All a prosecutor would have to prove is that Russian officials were aware of Assad’s atrocities and that the assistance to the regime committing the atrocities was substantial.

“For aiding and abetting, you don’t have to intend for horrible things to happen, you just have to know that they are happening,” he said. “They are responsible and under international law, the commanders of the people who are doing that in the field are responsible as well.”

The other main example of holding third-party governments and officials criminally responsible for war crimes came out of the International Criminal Tribunal for the Former Yugoslavia. Momčilo Perišić, the former Serbian general who was the head of the Yugoslav Army, was initially convicted of war crimes and crimes against humanity, but that conviction was overturned in 2013 because an appeals court found that he had not “specifically directed” the commission of war crimes and therefore was not directly criminally liable.

One year later, that same appeals court reversed itself when ruling on the case of Nikola Šainovic, the former prime minister of Serbia, and said that “specific direction” of war crimes is not necessary under international law in order for an official to be found guilty of being complicit in such war crimes. Šainovic is now serving a 22-year jail sentence for war crimes and crimes against humanity.

“The use of barrel bombing is a war crime. The use of indiscriminate attacks on civilians is a war crime,” he said. “To the extent that the Russian or Iranian governments have provided economic assistance, military assistance, and the presence of advisors or supporters, any crimes that are being committed by the Syrian military are also attributable to those who assist them, namely the Iranians and the Russians.”

Under the doctrine of “command responsibility,” which was first established in the Hague Conventions of 1899 and 1907 and first applied after World War I, top officials can be prosecuted for failing to stop war crimes and other atrocities that they were aware of, he said. Command responsibility was used successfully to prosecute Japanese General Tomoyuki Yamashita in 1945 for crimes committed by his troops in the Philippines during World War II.

“Command responsibility comes from those in Tehran or Moscow who know what these people are doing and failing to stop it,” Bassiouni said.

Other experts say that Russian criminal liability in Syria could be difficult to prove.

“If Syria is just persecuting their population, which could be an international crime, and Russia is providing military assistance to them, that’s probably going too far to say they are criminally liable for these atrocities,” said William Schabas, a professor of international law at Middlesex University and president of the International Association of Genocide Scholars. “There’s a requirement of some element of directness and knowledge in terms of the precise atrocities.”

Schabas also pointed out that other countries could stand accused of aiding groups that are committing war crimes around the world. The United States, for example, provides military aid to the Iraqi military and the South Sudan army, just to name two accused groups. But the United States also has processes under the Leahy law that are meant to prevent direct aid to military forces that violate human rights. Russia has no such process.

There’s no forum to even litigate the war crimes and crimes against humanity being committed in Syria right now and none in the foreseeable future. But as was the case after mass atrocities in World War II, Rwanda, Yugoslavia and Sierra Leone, there will someday be a reckoning. As Russian involvement in Syria increases, those who track war crimes are watching not just Assad, but also Putin.
Click to expand...

delft said:
China has no interest in Syria becoming a failed state.
A few years ago a South African businessman had trouble getting a visa for US because twenty years before he had fought as a member of ANC against the US friendly South African Apartheid regime and was therefore registered as a terrorist. Now US decide that Al Qaeda fighters aren't terrorists because they fight against a government US want to destroy.
Click to expand...

TerraN_EmpirE said:
would that include the Pro Syrian Militias as well? like
Please, Log in or Register to view URLs content!
a internationally recognized Shia Islamist terror group?
Lets be blunt The Russian Aim is to support Assad, To back him and his Regime as well as those that back him it's a matter of convenience to tag the term terrorist on to any group who wishes to rebel against Assad.
Click to expand...

And, let's be for real, the term 'terrorist' has always been one of political convenience.

plawolf said:
Must say I'm not impressed with their bombing gun camera footage. The bombs didn't really come close if they were aiming for what the curser was pointing at.

If that was the pick of the litter from their 20 bombing runs, the Russians needs Chinese direct military support more than I first thought.
Click to expand...

I would suggest that we wait and see how the rest of their bombing campaign goes. Give it a couple of weeks, though judging by the hysteria from certain media, we can safely say that they are /actually/ doing something- even if we don't know who the other targets are.

thunderchief said:
Russian helicopters are also in action . This video has been published by Russian Deputy Prime Minister Dimitry Rogozin, on his facebook account
Click to expand...

was that 12 hinds in one strike. that's no minor mission.

plawolf said:
Must say I'm not impressed with their bombing gun camera footage. The bombs didn't really come close if they were aiming for what the curser was pointing at.

If that was the pick of the litter from their 20 bombing runs, the Russians needs Chinese direct military support more than I first thought.
Click to expand...

Crosshairs are from UAV, I don't think they are related to targeting, i.e. projectiles are not supposed to strike where they point. Anyway, too early to tell how effective/ineffective those strikes really are .

the first picture of presumably the Russian air-strike 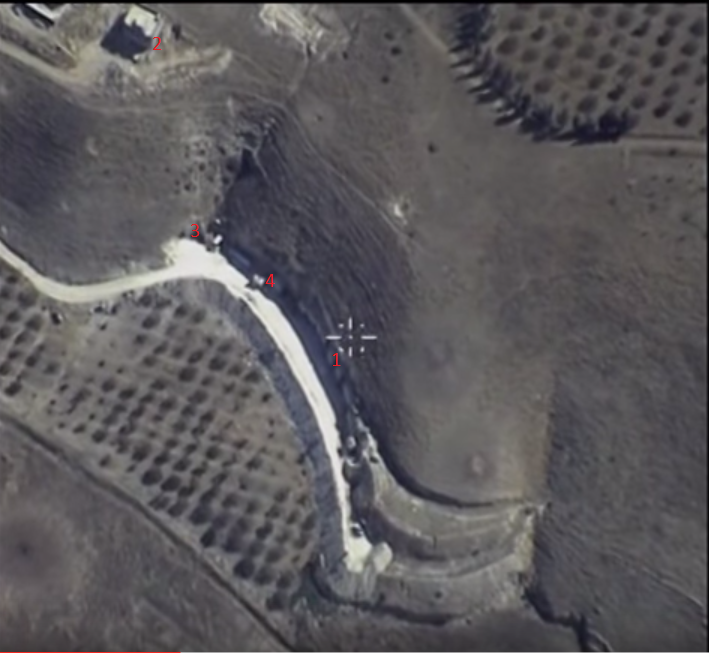 the second image comes from the video posted by individuals targeted by that attack? 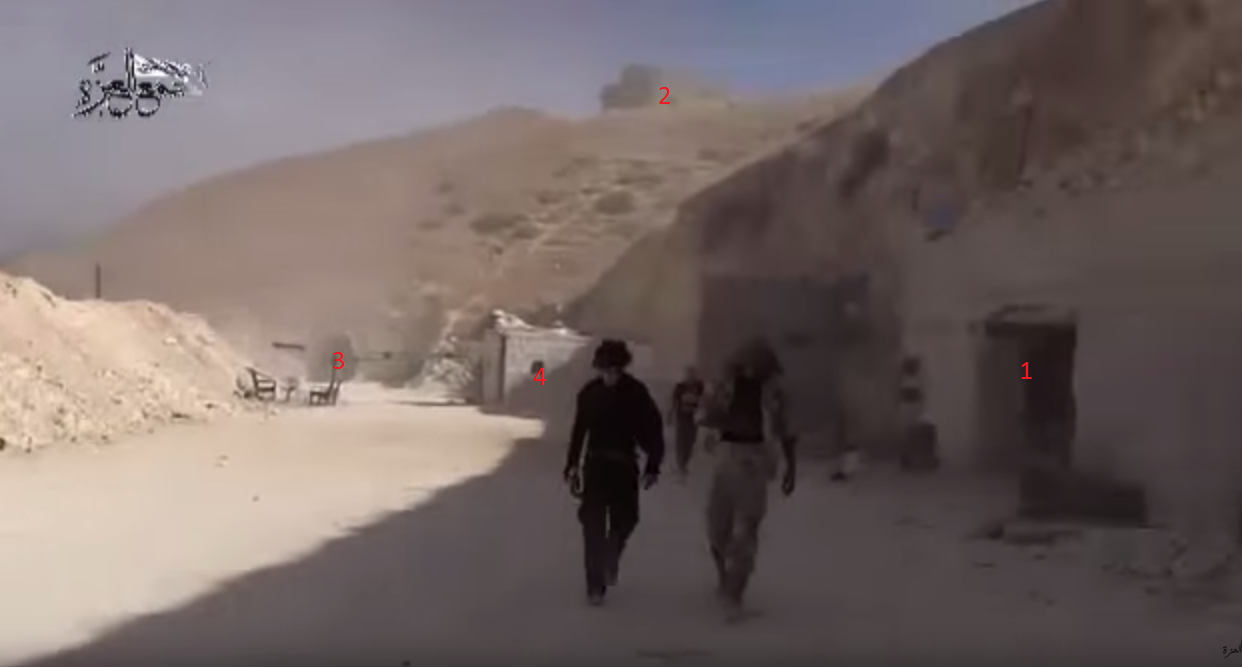 not fake, at all.
i noticed the same structural similarities as well.
plus, your situating the hilltop structure is excellent work.
kind'a stupid of the 'rebels' to do russia's mission assessment for them, huh.
now russia knows the site is still functional.

janjak desalin said:
not fake, at all.
i noticed the same structural similarities as well.
plus, your situating the hilltop structure is excellent work.
kind'a stupid of the 'rebels' to do russia's mission assessment for them, huh.
now russia knows the site is still functional.
Click to expand...

now I better add I found those images in Russian Internet! (so that it doesn't look like my personal analysis, I'm definitely not that good, actually I'm just a pub debater

EDIT
found the link; discussion below:

Please, Log in or Register to view URLs content!
(contains speculations what was the tactics about)
Last edited: Oct 1, 2015
D

TerraN_EmpirE said:
would that include the Pro Syrian Militias as well? like
Please, Log in or Register to view URLs content!
a internationally recognized Shia Islamist terror group?
Lets be blunt The Russian Aim is to support Assad, To back him and his Regime as well as those that back him it's a matter of convenience to tag the term terrorist on to any group who wishes to rebel against Assad.
Click to expand...

Hezbollah was founded to drive the Israeli occupation out of the Southern half of Lebanon and after it was successful to keep Israel out. In the 2006 war it proved able to do that. The Western Main Stream Media describe that as terrorism.
The murder of Rafik Hariri was blamed on Hezbollah but it looks more like a false flag operation and sufficient evidence has even yet not been produced.
Violence in politics in a country is only justified if no other means exists to remove an obnoxious regime but is still often called terrorism. I earlier referred to the South African businessman who even twenty years after the demise of the Apartheid regime was still on the US terrorists list.
In Syria a violent episode in a town in the South of the country was taken as an opportunity by Saudi Arabia and Qatar to recruit mercenary terrorists, who were trained by CIA in Jordan, to start a terrorist campaign against Syria, helped by the reduction of Libya to a failed state which made a lot of weapons available. One argument is the Sunni/Shia division. Probably a more important reason was the conflict of natural gas pipelines from the Persian Golf to the Mediterranean, either the one from Qatar to Turkey or the one from Iran to Lebanon will cross Syria. No wonder Saudi Arabia and Qatar spent billions of dollars sponsoring terrorists in Syria in clear violation of the Charter of the United Nations.
You must log in or register to reply here.