silentlurker said:
Isn't the Iskander a ballistic missile vs Kinzhal is a cruise missile? I'd imagine there are significant differences.
Click to expand...

Kinzhal is not a cruise missile.

Please, Log in or Register to view URLs content!
There is so much hype about hypersonic weapons lately that it can be easy to get confused with all the systems being developed.
Kinzhal fits into the same niche as weapons like the Kh-22/32.
It is a rocket missile designed for air to surface attacks with a conventional or nuclear warhead.
But Kinzhal uses solid instead of liquid fuel and has a more maneuverable warhead than the Kh-22/32.
It allegedly also achieves higher terminal velocities than those older missiles (Mach 10).

The Chinese retention of the larger first stage probably indicates that unlike the Russian Iskander they intend this missile to be used not only primarily against ships but against longer distance surface targets in the second island chain.
Last edited: Oct 17, 2020
T

Those measurings are off, as far as I can tell. The diameter of the missile can be ascertained by drawing a line from the tip of the nose, parallel to the rest of the missile. With that, it becomes apparent that there's some width "hidden" in the shadow under the plane. My measure of the diameter is around 1.2 meters.

The length, when compared to 34.5 meters for H6, comes out at 11.8 meters. I'd say the end of the missile is pretty clear, and it's not the full protrusion that seems evident behind it.

I actually wouldn't discount it being based on DF-21 because... are we even sure about the DF-21 figures out there? Who did those measurements? The figures that are usually mentioned, 1.4 m diameter and 10.7 m length seem to be coming from a Jane's publication. And... I frankly think there've been a bunch of times when they got their data wrong, over the decades. I mean, seriously, how would they get access to exact figures for DF-21? That's almost impossible.

Also, there may be slight differences in DF-21 variants, even among the land launched ones. Especially when it comes to length.

And of course, with low resolution, all this might be off by several percent. 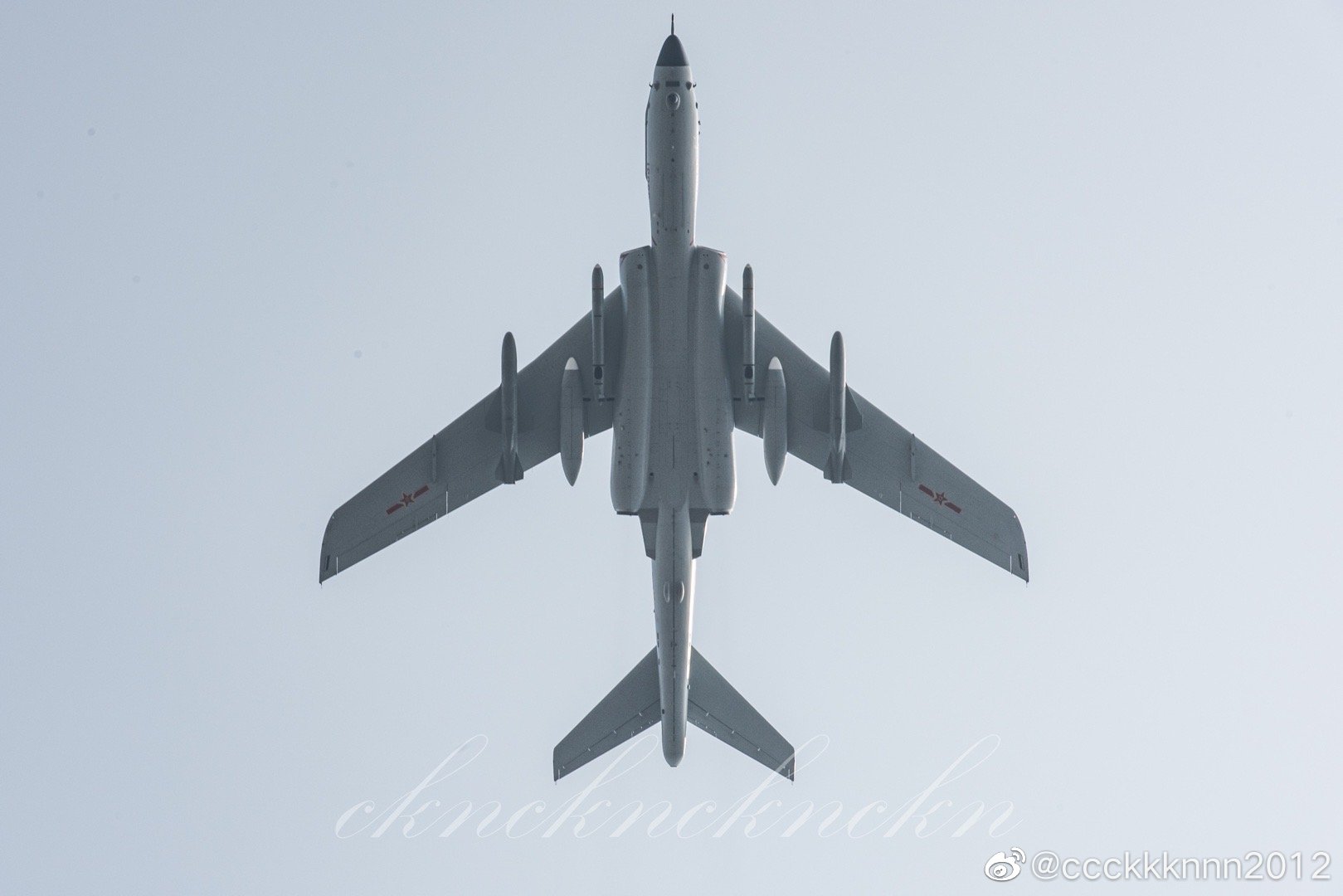 Staff member
Super Moderator
Registered Member
The size of this weapon is somewhere between AGM-183 and the LRHW, and it's not clear whether its RV is a HGV or "only" a MaRV.

But either way this is quite a different category of weapon to Kinzhal in terms of weight and size, it's very much its own weapon.

Registered Member
So, despite no official confirmation, can we say that it's most likely to be an air launched hyper sonic missile?
TWZ reported it likely to be a HSW.

We should bear in mind that the diameter is significantly reduced from a ground-launched system. Since range is a function of propellant volume, and since the volume of a cylinder scales quadratically with its diameter, the ALBM's range (if on a ballistic trajectory) might be lower than the DF-21.

Could an H-6N carry this missile as well as a full complement of 6 YJ-12s on its wings?
T

ZeEa5KPul said:
Could an H-6N carry this missile as well as a full complement of 6 YJ-12s on its wings?
Click to expand...

Very unlikely. A missile of these dimensions likely weighs 10 tons. Possibly a ton or so more with the structure holding it up.

Considering that likely weight of YJ-12 is likely around 2 tons each, there's simply not enough lifting power to do it all.

It's likely this big missile configuration is also very draggy, so the last thing needed is more drag.
Besides, a mission that includes both attacking a ship 2000+ km away and attacking ships 500 km away, from a single plane, is more or less impossible to imagine. If such a need arises, it'd most likely be done by two sets of platforms.
S

Registered Member
Agreed. H-6s aren't going to be heading out with these weapons to do patrols, it'll be one massed strike against an already tracked target, then back to base.
You must log in or register to reply here.