On 12 August this year, at the Remontowa Shipbuilding shipyard, acceptance documents were signed for the second of a series of modern minehunters – the ORP Albatros vessel being built for the Polish Navy. 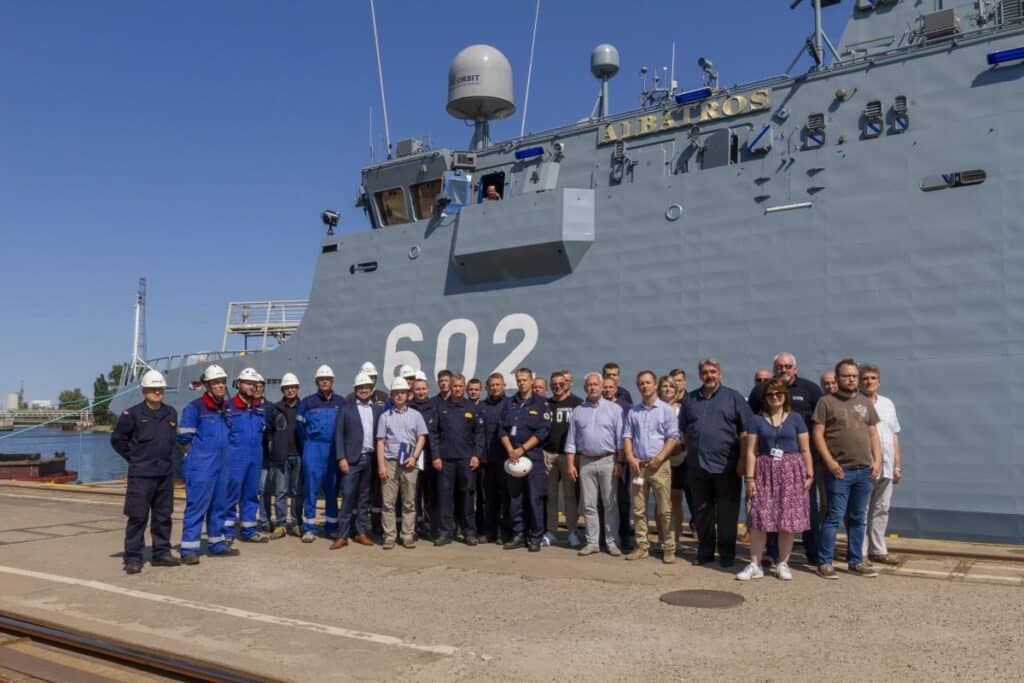 The handover of the ship was preceded by several months of delivery and acceptance trials, during which the offshore platform and mine threat equipment and systems were checked. Successful completion of the acceptance trials confirmed the ship’s ability to perform its main tasks, which include:

The ORP ALBATROS ship is already the second of the KORMOARAN II type mine destroyer series. Five years ago, a prototype vessel ORP KORMORAN was handed over to the Polish Navy.

ORP Kormoran was handed over to the navy five years ago. On the basis of experience gained during its operation, certain modifications were introduced in the construction of subsequent vessels. Thanks to them, ORP ALBATROS, as well as subsequent vessels, is equipped with new devices for verifying sea areas. The ship’s artillery system was also changed to a more modern one.

ORP ALBATROS will become part of the 13th minesweeper squadron, which reports to the 8th Coastal Defence Flotilla in Świnoujście.
-End- 
The Czech Republic will
Please, Log in or Register to view URLs content!
with Israel to purchase three Heron drones including ground control stations, data terminals, and shipping containers.

The acquisition comes as part of the Czech Army’s “Capability Building Concept,” an initiative to build up the service’s unmanned aerial vehicles (UAV) capabilities for aerial reconnaissance, combat support, and ground unit protection.
The ministry expects contract negotiations to be finalized by the end of this year.

Minister of Defense Jana Černochová explained the Czech and Israeli government are in direct negations with each other. “It will enable us to set up long-term cooperation and ensure the operation, repairs, and supply of spare parts for the supplied military equipment throughout its lifetime,” she added.


Possible Use Outside Czechia​

The defense ministry explained that it chose the Heron as a result of recent market consultations concerning which drone would best meet the Czech Army’s requirements. Israel Aerospace Industries’ Heron emerged as the favorite.

“The selected system most closely corresponds to the expected use within the army and meets future requirements for full-scale use, both on the territory of the Czech Republic as part of training, and for possible use as part of supporting units in foreign operations,” Colonel Pavel Nakládal said.

The next step is negotiating “with the aim of achieving the lowest possible price” and the shortest possible delivery date, the ministry of defense said.

Developed by Israel Aerospace Industries, the
Please, Log in or Register to view URLs content!
is a Medium Altitude Long Endurance (MALE) unmanned aerial vehicle “for strategic and tactical missions,” according to the company website.

Registered Member
SAAB lecture on Gripen this past weekend:

Sinnavuuty said:
SAAB lecture on Gripen this past weekend:
Click to expand...

The Sikorski UH-60 Black Hawk, scheduled for delivery in the 1st quarter of 2023, have the capacity to transport up to 2950 liters of water, a team of 12 firefighters and their equipment, having an autonomy of about 150 minutes, with of water.

The plane, named NATO14, undertook a 21-hour flight from Edwards Air Force Base in California, US, and a series of comprehensive tests by manufacturer Northrop Grumman.

“The return of this aircraft marks a major milestone for AGS and the Alliance,” NAGSF Commander Brig. Gen. Andrew Clark said.

After NATO14’s arrival, four additional RQ-4D are expected to return to NAGSF’s base in Italy with the same upgrades.

The RQ-4D is powered by a Rolls Royce-North American AE 3007H turbofan engine that enables a speed of 310 knots (360 miles/580 kilometers per hour).
Click to expand...