During its Submarine Seminar 2017 held this morning, Saab Kockums announced that the A26 next generation submarine is now a family with three model range: Pelagic, Oceanic and Oceanic (Extended Range).

BMT has launched VENARI®-85, a new mine countermeasure (MCM) concept design capable of clearing mines faster over a greater area and with less risk to the crew, whilst simultaneously providing broader utility to navies around the world. VENARI®-85 offers a flexible platform that is capable of a spectrum of roles which is future-proofed and able to evolve as technology advances in the unmanned and offboard systems markets take shape.


With Poland poised to launch the tender process for a new fleet of "Kruk" attack helicopters, potential suppliers used the MSPO show, held in Kielce from 5-8 September, to promote their candidates.

Warsaw wants to acquire 32 new attack helicopters, with an initial batch of three required by 2022 to support training activities. It plans to award a contract by the end of the third quarter of 2018, which is also to cover personnel instruction and support.

Analysis and concept definition phases have already been completed, along with technical dialogue, with four bidders. Airbus Helicopters/Heli Invest are offering the Tiger; Turkish Aerospace Industries and WSK PZL-Świdnik the T129, and Bell Helicopter and Boeing are promoting their respective AH-1Z and AH-64E models in conjunction with the US government.

"We are open for 'Polonisation' of the AH-1Z, but first the Polish government must formulate requirements, how many helicopters will be acquired, and what training, logistic and support package would be provided," says Bell international military business development official Mike Gleason. "After that we can start dialogue with the US government and US Marine Corps about the FMS [Foreign Military Sales] procedure. And we will be able to prepare a transition study and what our industrial package will be.

"We are able to co-operate with Polish aviation companies," Gleason says. "Establishing a MRO [maintenance, repair and overhaul] facility in Poland and indigenous training capabilities – supported by the USMC – is a minimum of our offer."

Bell says AH-1Z deliveries could start 30-34 months after a final agreement, and occur at a rate of one to two per month.

"More helicopters means more opportunity for 'Polonisation', but a configuration other than the USMC's will be very costly to develop and integrate," says Joel Best, senior manager Europe, Bell military programmes. "If Poland chooses different weapons and computers, there will be no interoperability with other NATO assets".

Separately, Bell on 14 August delivered its first AH-1Z to an export customer, under a 12-aircraft deal with Pakistan. The remaining aircraft are scheduled to be handed over before the end of 2018.

"We are actively talking with state and private Polish companies, investigating possibilities for co-operation in production, maintenance and training," he says. National-specific adaptations could potentially be made in areas such as weapons, radios, sensors and antennas, he adds, and deliveries could begin around 30-32 months after a contract award.


The Eurofighter consortium used the MSPO show in Kielce from 5-8 September to promote its Typhoon, as the Polish air force examines its future combat aircraft requirements.

"Eurofighter Typhoon augments existing capabilities and further complements a powerful deterrence against any potential threat to Poland’s borders. The Typhoon with the [Lockheed Martin] F-16 Block 52+ will be a perfect combination," says head of marketing Raffael Klaschka.

In service in Austria, Germany, Italy, Oman, Saudi Arabia, Spain and the UK and on order for Kuwait, the Typhoon has been active in supporting recent NATO air policing operations over the Baltic states and Black Sea region.

Klaschka says a selection by Warsaw "would bring new and additional opportunities to Poland – both from a military and economic perspective, from assembly and manufacturing to support and maintenance. All options are on the table.

"Poland can integrate and certificate weapons, pods and other equipment," he adds, noting: "we believe we can deliver an attractive and cost-effective solution for Poland and are able to co-operate with every company."
Click to expand...

Please, Log in or Register to view URLs content!
POSTED ON WEDNESDAY, 06 SEPTEMBER 2017 19:30
During MSPO 2017, the Polish firearms manufacturer FB "Łucznik" Radom has signed a contract with the Polish Ministry of Defense for the delivery of 53,000 GROT assault rifles in standard configuration 5.56mm caliber to the territorial defense forces of Poland.
Click to expand... 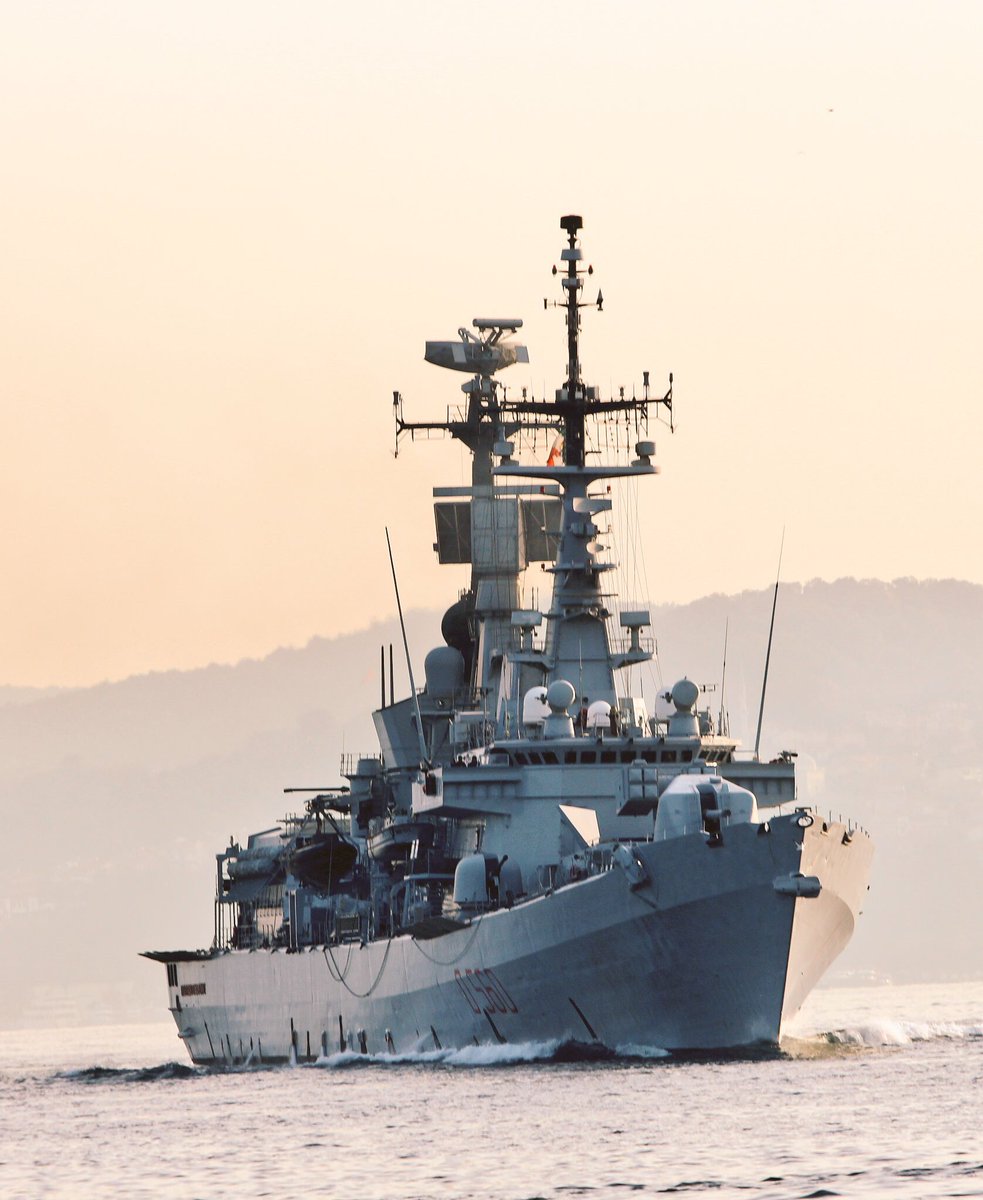 was glad to see this kinda Cold War fighter (multiple guns but no VLS etc.), which came late to the Cold War LOL
they keep her modernized (3D radar etc.:
Please, Log in or Register to view URLs content!
)

Italian Air Force Breguet Atlantic (based in Sigonella AB) is retired today from service after 45 years and replaced by new ATR P-72A
Click to expand...

In a signing ceremony on 25 September, 2017, the current Multinational Multi-Role Tanker Transport Fleet (MMF) contract was amended to include both Germany and Norway as participants to the MMF project along with the Netherlands and Luxembourg. Mr. Arturo Alfonso-Meiriño, OCCAR Director, Mr. Bernhard Brenner, Airbus Defence & Space Executive Vice President Marketing and Sales, and Mr. Didier Plantecoste, Airbus Defence & Space Head of Tanker Programmes and Derivatives officially signed the amendment at OCCAR-EA offices in Bonn, Germany.

This amendment exercises a contract option to significantly increase the scope of the project from the two A330 MRTT aircraft initially ordered to seven aircraft in total, including also options for up to four additional aircraft (potential increase to 11 aircraft in total). The contract amendment signifies an important evolution of the MMF Programme as a key capability for NATO and European Air Forces, demonstrates the increasing confidence of European nations in the cooperative solution achieved by the European Union and NATO and recognizes the A330 MRTT product. Further nations are expected to join the MMF in the future and to exercise the available contract options.

The MMF project was initiated by the European Defence Agency (EDA) in 2012 and the Organisation Conjointe de Coopération en matière d'Armement (OCCAR) manages the acquisition as the NATO Support and Procurement Agency’s Contract Executing Agent. The acquisition phase was launched in July 2016 with the signing of the original contract and includes the first two years of support. Following the acquisition phase, NSPA will be responsible for the complete life-cycle management of the fleet.

The Programme is funded by the four participants to the MMF project who will have the exclusive right to use these NATO-owned aircraft which will operate in a pooling arrangement. The aircraft will be configured for inflight refuelling, the transport of passengers (including VIPs) and cargo as well as for medical evacuation flights. The aircraft will be operated by a multinational unit from the Main Operating Base (MOB) in Eindhoven (NLD) and Forward Operating Base (FOB) in Cologne (GER).

The delivery of the seven A330 MRTT aircraft currently on contract from Airbus Defence and Space’s tanker conversion line at Getafe near Madrid is expected between 2020 and 2022.

This ship hardly has any weapons on it! Is this suppose to be some sort of surveillance ship? All I see is what looks like RIM-116s on the front and rear of the ship, no visible sign of VLS.

Dizasta1 said:
This ship hardly has any weapons on it! Is this suppose to be some sort of surveillance ship? All I see is what looks like RIM-116s on the front and rear of the ship, no visible sign of VLS.
Click to expand...

Jura said:
German Navy’s New F125 Frigate Features GE LM2500 Propulsion
Please, Log in or Register to view URLs content!
inside of course nothing about May 13, 2017

but MEIN GOTT:
"... the F125 sets new standards in naval shipbuilding. It is designed to meet the requirements of our Navy in current and future missions, such as fighting piracy or monitoring movements of refugees in the Mediterranean."
now, after Mrs. Merkel invited zillions of Migrant, MONITORING MOVEMENTS OF REFUGEES IN THE MED
MEIN GOTT!

plus it's truly pathetic to invest into CODGLAG and have no sonar etc.