North Korea's navy is probably the most top secret navy in the world, few outsiders know much about it. As far as outsiders know, the Najin-class light frigate is the largest and most powerful operational surface combatant in North Korean navy, although it is considered to be outdated by pretty much any standard.

A large surface combatant was spotted (don't know when) by Google Earth. Judging by its appearance, its size seems to be comparable to the main surface comatants operated by DPRK's 4 neighbors, and should be by far the biggest warship in the DPRK navy if it becomes operational. Some speculate it is a Krivak-class frigate. However, there were no reports of seeing the ship being operational. Any speculations? Maybe they are refitting the ship in similar ways Varyag and Gorshkov are being refitted?

Here are two links of interest I found on Google:

A picture from the second link: 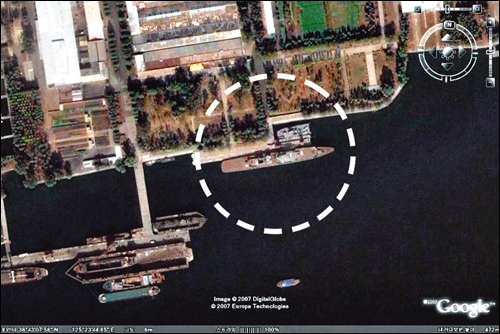 VIP Professional
I could've swore this was discussed some time in the past. That ship is a stripped ex-Soviet/Russian warship and has been sitting in dock for quite some time.

VIP Professional
Yes it's a Krivak. Probably a Krivak I. The link to Keypublishing forum is to a post by some idiot called planeman. Ignore what he says he's knows jack-all about anything.


BTW, the smaller square looking craft more alongside the Krivak is even more interesting
S

hmmm its a soviet Krivka alright( take it from the soviet General) and im realy concern on the square object besides the warship. Any one knows on what it could be, my gues is as good as yours. oh and planeman you might whant to read your quick reply.
S

Soviet General said:
hmmm its a soviet Krivka alright( take it from the soviet General) and im realy concern on the square object besides the warship. Any one knows on what it could be, my gues is as good as yours. oh and planeman you might whant to read your quick reply.
Click to expand...

I'm not an expert at all on this stuff and I didn't look closer at the square object, BUT the square object may be a catamaran-style craft or hovercraft? I have no clue about their capabilities but thats what I thought of when I saw it.

thank you comrad Sargon, hmmm a catamaran-style craft or hovercraft were my first thoughts, but i never hered of the DPRK having such tech for a country the adopts shin-jo police wich means to cloose its border from the world. my secound thought was, is this object has any links with the warship or could it be a normal malbary, a man-made harbor that the Americans made to support the D-Day landing on Normandy. "IF" so then it could be thier as a support craft for refitting or what ever the DPRK intends with that warship. Any more info help from anyone could be helpful tours my study on this mater. Again thanks comrad Sargon. oh and does anyone is notice the smal ship on tha warship's south-estern side any notes on it? it seams to be surrounded by a wall like its in a drydock.

VIP Professional
Look at the link to Keypublishing in the first post and see my analysis. To be fair I had a lot of help in my analysis and research from an ex-USN guy. My guess is that there are at least three SES type FACs, one of which is an attempt at stealth, and one is in this image.
You must log in or register to reply here.