This is the kind of things I love seeing; Chinese culture, language, philosophy, history, art, fashion, literature, myths, legends, stories, and the list goes on and on, presented globally in comfortable, understandable, relatable, and elegant manners.

She's built two of China's most influential designer brands and dresses the country's first lady, Peng Liyuan -- but doesn't consider herself a designer.

Preferring a reclusive life in Zhuhai, a city on China's southern coast that's a world away from the country's fashion hubs in Shanghai and Beijing, Ma never reads fashion magazines, shuns parties and rarely gives interviews.

For this exclusive, CNN wasn't allowed to take photos at the opening of her new exhibition, nor did she want to supply a head shot. "I don't belong in fashion circles," she says. 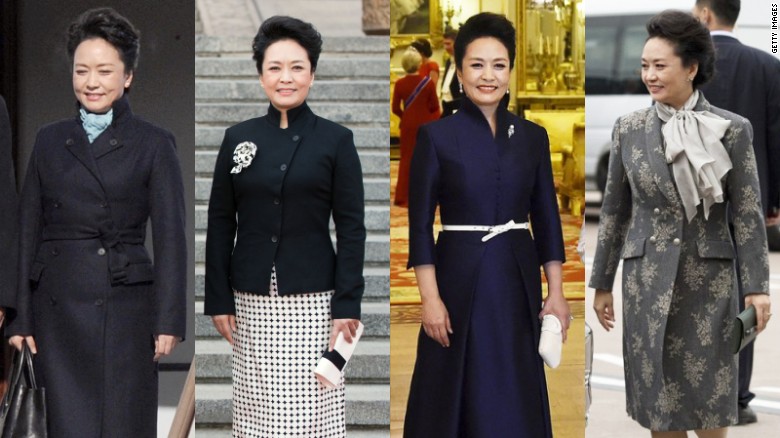 China's first lady Peng Liyuan in outfits designed by Ma Ke
Ma may shun media attention, but her fashion success speaks volumes in itself.
Hugely influential in China's fashion world for her brands Wuyong and Exception de Mixmind, the designer became a household name when China's first lady wore one of her designs on her first official overseas trip in 2013.

"It fits her well, as she is a soldier and she has a kind of assertiveness and toughness," Ma tells CNN of the now-famous trench coat, the first time she's confirmed which outfits she's designed for Peng.
Ma has known China's first lady since 2002, and through her designs, she says she wants to convey the inner confidence of modern Chinese women.

"You know sometimes clothing can come across aggressive when it's too revealing and eye-catching and it's the opposite of traditional Chinese aesthetics," she says. "Women don't need to use clothing as a weapon if they're confident in their character and cultivation."

It's ensured Peng, who was a famous folk singer before becoming first lady, is compared to fashion icons like Kate Middleton and Michelle Obama, both of whom have helped emerging designers become stars. "My philosophy for the first lady's designs is elegance, subtlety and demureness," Ma adds.

Chinese style isn't what you think
It's a philosophy that Ma has drawn from her deep appreciation of traditional Chinese design.
While many regard the form-fitting cheongsam or qipao as epitomizing Chinese style, Ma, who reads Chinese classics extensively, says the opposite is true. 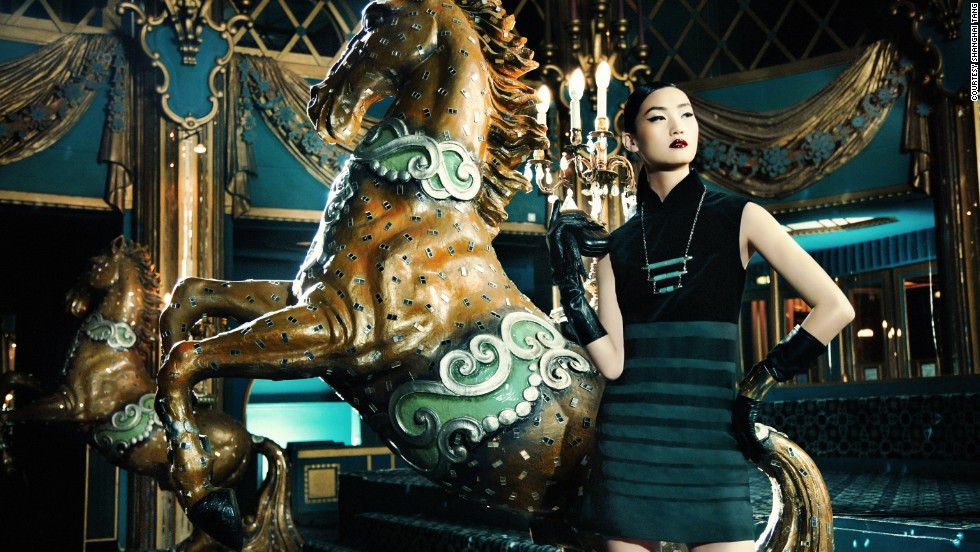 Photos:
Cheongsam story – From its turn as a 1920s feminist statement to modern incarnations, the Hong Kong Museum of History's "
Please, Log in or Register to view URLs content!
" celebrates the iconic dress. This contemporary version (not featured in the exhibit) is from Hong Kong fashion brand Shanghai Tang.

"In Western values, women are beautiful if they are sexy. Chinese design is more concealing." "Like the traditional Chinese ink painting, the blank space between fabric and skin is where the beauty resides," she says.

Ma also draws on tradition for her couture designs for her Wuyong brand, employing techniques such as loom weaving, hand-sewing and natural coloring.

Her unusual textures, architectural shapes and earthy colors led to her becoming the first Chinese designer to be invited by one of high fashion's most respected bodies,
Please, Log in or Register to view URLs content!
, to show at Paris Haute Couture week in 2008. 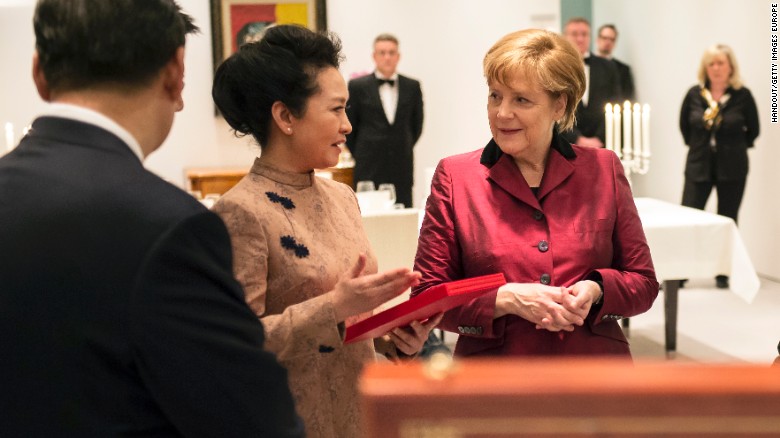 It's a theme she's also exploring further with her latest venture, an exhibition she has curated and installed in her Beijing Wuyong showroom called "In search of the clothes with the best stories."

Ma says she wants to highlight traditional Chinese design with her exhibition, and support the people who produce handcrafted products in China's rural areas. "I went to the rural areas many times to study traditional clothes making techniques and I was impressed. I decided to help rejuvenate the traditional craftsmanship," she says. "Clothes crafted with care and love last longer," she adds. "If we don't seize the time, we'll lose lots of previous cultural heritage."

"In Western values, women are beautiful if they are sexy. Chinese design is more concealing." "Like the traditional Chinese ink painting, the blank space between fabric and skin is where the beauty resides," she says.
Click to expand...

At the risk of sounding like I'm objectifying women, I think the above noted difference is due to physiological differences between caucasian and east asian women.

Compared to asian women, caucasian women have more generous curves. Therefore, it makes sense for them to wear outfits that display those assets.

On the other hand, asian women have more delicate and aesthetically pleasing facial features, therefore their clothes are designed to accentuate their beauty, and focuses less on their body shape.

What's appealing is not only cultural. It's also intra cultural. When you see those fashion shows and the models walk down the runway for a designer, personally I see over 90% of the clothes as unappealing. Am I saying the designers are horrible? No. A lot of designers approach clothes as a form of art and that appeals to that crowd just like in art some wonder how that's considered art while others think it as genius. Guys tend to look at women's clothes in a sexual context. A lot of men don't realize women dress for women not for men most of the time and not in a sexual context. What I find odd are those that are in the fashion industry always calling this or that "sexy" when usually it's not sexy to a straight man. Actress Sarah Jessica Parker has been seen as a fashion queen in those circles but according to straight men is the number one ugliest female celebrity. Who are the ones that control the fashion industry? Women and gay men. Is that why a lot of models are shapeless and anorexic with a boyish look?

We had somewhat of a discussion long ago in this forum on this subject regarding beauty pageants. China would always send women they thought were beautiful to international pageants and they would stand out not like the rest. When you go to Asian centered internet forums, you'll always comes across beautiful women threads. Asian tastes are not Western tastes. Asians like petite and thin shapes while Westerners like statuesque shapes. It's only when countries like Japan sent Western type women is when they won Miss Universe and China sent one to win Miss World is when they got results.

It would be interesting to see historical Chinese fashion, such as the Hanfu, go into mainstream again. We are seeing a lot of interest from young people in those kinds of clothes, even though right now they're restricted to photo sessions.

Seems like group-think is thick in the fashion industry.

I found this interesting article on Tianya:

In the post, she expresses frustration with her fellow muslims on 2muslim.com, who, in her view, are more interested in talking about the correct way to pray or to wear the veil, than to talk about the future of Islam.

For her view, she was ostracized and banned from the site, so she posted this for her last word.

Her post is an instructive view into the lives and beliefs of modern Hui Chinese, and I found it a fascinating read.

This is a google translation for our non-Chinese reading forumites:

Same goes to religious institutions and their interference with government.

Interesting to see a piece on the Jiayuguan part of the Great Wall:

I visited the place in 2008. No tourists back then, the fortress was brand new and indeed felt like a film set. I still have a picture of me shooting a bow from the rampart.

While the new fort itself didn't have much of a historical feeling, standing on the ramparts and looking at the landscape beyond was another matter entirely. The fabled Qilian mountains stretched across the horizon, and below was a stretch of earthen ramp that was all that remained of the original wall. You could literally feel the millenia imprinted on the land.
You must log in or register to reply here.