Let's leave aside the carrier under construction for the moment and focus on the container ship and the large tanks starboard of the carrier. The large tanks can be for an tanker or LNG carrier, but they can also be the fuel tanks for an LNG powered container ship. This means that unlike other container ships, an LNG powered container ship is built like a tanker with a series of tanks in the hull, separated with a double hull for safety measures. Given the ships are likely for Europe to Asia sea traffic, which for their size means they are not going through the Suez Canal but goes down the Atlantic to Cape Hope in South Africa, then into and across the Indian Ocean, they would have to carry enough LNG.

A single one of these ships can replace a few smaller container ships that burn dirtier fuel. The move towards bigger ships is reduce the number of ships in the ocean and thus lower the carbon footprint while sheer economies of scale reduce the freight costs.

While gas turbines and electric motor propulsion is an option, the ones that were built used a humongous Otto cycle engine, as in piston engine.

Registered Member
Please, Log in or Register to view URLs content!
The first in the series Jacques Saade class 23,000 TEU LNG container vessel has been delivered. Four more vessels of this class will be delivered every 2 months until the middle of next year from the Hudon-Zhonghua Shipyard. One of such ship was seen parked in the dry dock next to the Type 003 aircraft carrier under construction recently.
T

halflife3 said:
Please, Log in or Register to view URLs content!
The first in the series Jacques Saade class 23,000 TEU LNG container vessel has been delivered. Four more vessels of this class will be delivered every 2 months until the middle of next year from the Hudon-Zhonghua Shipyard. One of such ship was seen parked in the dry dock next to the Type 003 aircraft carrier under construction recently.
Click to expand...

Hyundai, Hudong Zhonghua and Jiangnan are the three contractors for these ships. The ones you see around 003 carrier are those built by Jiangnan. Hudong Zhonghua's Changxian shipyard is nearby and that's where the other ships are being made. Jacques Saade was delivered by Jiangnan, and the first of its class. Recently Hyundai also delivered the first ship of their contract.

The challenges building these ships requires a first rate shipyard. LNG means leaking gas, a ship collision, terrorism means the ship goes kaboom, like a big boom. Not only does it destroy all the cargo, it can do great damage in a port and ships near it. So they have to be built with safety measures such as double hulling, temperature and pressure sensors around every tank. Its like a ship is built around a ship. LNG powered containership is almost like an LNG carrier.

They won't be building these ships if the EU didn't slap carbon taxes on ships and making tighter and tighter carbon emission rules on ships that are allowed on their ports. This means older, dirtier ships have to be phased out sooner while being replaced by a new generation of carbon clean ships. Bigger ships means less ships on the sea transporting the same amount of cargo, so it lowers carbon footprint.

Older, smaller and dirtier ships has to be relegated to US trade, across Atlantic or Pacific. US ports could hardly handle ships over 15,000 TEU, and even if ships that can handle well over that, they are not completely filled. Another reason is the lack of sufficient business to fill the entire ship.

The biggest ever ship to visit a US port is the CMA CGM Benjamin Franklin. Despite having such an American patriotic name, the ship is made in Jiangnan. The capacity of this ship is "only" 18,000 TEU. In terms of size, the ship is about 400 meters in length and 54 meters in beam.

Registered Member
A segment on Jiangnan Shipyard up close.

On September 28, Wu Weizhang, deputy secretary and general manager of the Harbin Electric Group visited the Bochuan Group. The leaders of the Bochuan Group Hu Defang, Guo Yuzhuo and Jiang Meigang received him. 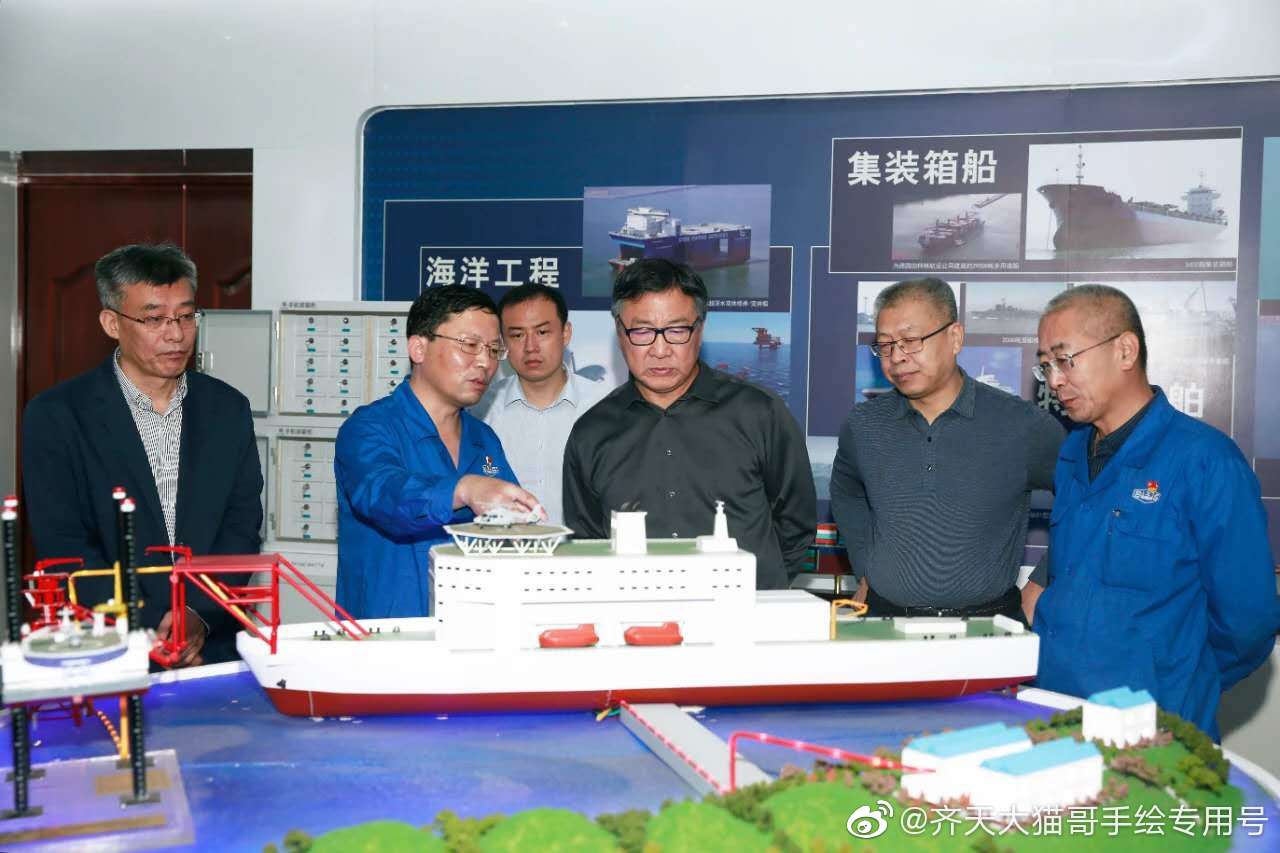 by78 said:
On September 28, Wu Weizhang, deputy secretary and general manager of the Harbin Electric Group visited the Bochuan Group. The leaders of the Bochuan Group Hu Defang, Guo Yuzhuo and Jiang Meigang received him.

Looks like an offshore supply vessel or FPSO that is used to support offshore oil rigs and platforms.
T

Registered Member
This press unit that is used for to form plates for the complex hull geometry of the 055 can have great potential for use with commercial ships.

The Huarun Dadong shipyard located in Shanghai specializes in ship conversion and repairs.


Please, Log in or Register to view URLs content!
Hudong Zhonghua to complete LNG bunker vessel fro Mitsui OSK and France's Total. The ship will fly the French flag and service the Mediterrenean.


Please, Log in or Register to view URLs content!
Says here the CMA CGN Jacques Saade is built as a partnership by Hudong Zhonghua and Jiangnan. It is impressive that only 26 people are going to crew this enormous ship.

Registered Member
Blueprint of success of the Chinese shipbuilding industry.


Please, Log in or Register to view URLs content!
"The H1416, the largest container vessel in the world, was launched from Shanghai’s Wai Gao Qiao shipyard last year and the world’s largest Liquefied Natural Gas (LNG) carrier is currently under construction in the northeast China port of Dalian. In fact, more than four out of every 10 of the large ships sailing around the globe today were made in China."
T

Registered Member
Lets start with first, this isn't a container ship. This vessel appears highly specialized, likely built from the ground up for this purpose, as a sea launcher.

Why does China need ship launched orbiters? This isn't to demonstrate some kind of ASAT or sea borne ASBM capability that I can turn my entire commercial fleet into floating ballistic missile launchers. The reasons for sea borne launch is much more mundane. This is to bring the launch point as close to the equator as possible, where, with the help of the Earth's rotation, gets as much velocity as possible. This is why Cape Canaveral is in Florida, and other launch areas are in Texas. Why China uses its southern provinces for launch sites, including Hainan. Russia has a built in disadvantage, but its launch center is somewhere in southern Russia. The farther the equator you are, the more likely you would need a larger more powerful booster to reach the same escape or orbital velocity. If you launch off a ship near the Earth's equator, your rocket can afford to be smaller.