can be used for area-wide, point and battle field air defense.

Can be slant or vertical launched.

Seems comparable to HQ-16 stats, similar length but almost half the body diameter.

At 0.66m I'm not sure if it could be quad-packed, maybe if they have a finless or retractable variant.

The disclosure that China has the capability of jamming the Joint Tactical Information Distribution System, or JTIDS, was revealed in a Chinese military technical article published in July.

JTIDS is part of a group of military communications systems called Link 16 that gives U.S. military forces jam-resistant communications, a key strategic advantage used in joint warfighting, a specialty of the American military.

JTIDS allows for a nearly unlimited number of military commanders and operators to share information, such as precision location or position data, critical in tracking, monitoring, and targeting. It is also resistant to electronic warfare attacks by rapidly jumping to different frequencies.

The Chinese article reveals that the People’s Liberation Army is studying this feature and working to defeat it.

The article, “Anti-Jamming Performance of JTIDS-Type Waveform,” was published July 10 in the journal Aerospace Electronic Warfare, a publication of Institute 8511, a unit of the China Aerospace Science and Industry Corporation (CASIC).

The article states that Chinese researchers have studied the JTIDS anti-jamming capabilities and formulated an “optimal jamming strategy from the point of view of the interferer.”

The Chinese article reveals that researchers have extensively studied JTIDS and produced several technical articles on the system. The article discussed “broadband barrage jamming” and “partial-band interference” of JTIDS.

As a result, the researchers “discovered that the only way to obtain a good interference result is to increase the interference power.”

A footnote to the article notes other work has been done on how to interfere with JTIDS communications.

According to court papers, Gregg Bergersen, a weapons system analyst with the Pentagon’s Defense Security Cooperation Agency, sold secrets on a JTIDS variant known as Po Sheng that was sold to Taiwan in the early 2000s.

An FBI affidavit in the case revealed that Bergersen “discussed Po Sheng and communications security” during a dinner meeting on March 3, 2007 with a Chinese agent identified as Tai Shenkuo. The affidavit said the talks involved disclosure of classified information.

Bergersen was director of command, control, communications, computers, and intelligence programs for the Navy. He pleaded guilty in 2008 to charges of disclosing national defense secrets to China. He was sentenced to four and a half years in prison.

“China would like nothing better than to be able to disrupt or corrupt sensitive U.S. military communications—it is at the heart of their military strategies of information dominance and anti-access/area-denial,” Van Cleave said in an email. “So they send spies to steal what they need with the help of traitors like Bergerson who blithely sell it to them.”

“The denial of U.S., Japan, South Korea, Taiwan abilities to employ JTIDS is only one goal,” Stokes said. “Satellite jamming is another area of focus. The PLA also is investing into R&D on a range of communications technologies, including tactical data links.”

Richard Fisher, an expert on China’s military with the International Assessment and Strategy Center, said in addition to countermeasures, China likely used the military technology secrets obtained from Bergersen to develop its own jam-proof tactical communications system.

“It’s a fact the Chinese are developing their own JTIDS-like Link 16 system for distributed command and control operations,” Fisher said, adding that an early version is probably in use now by Chinese military forces.

“Right now Link 16 is a crucial force multiplier that allows the United States to fight jointly,” he said. “It is the main linkage between different kind of forces and different services. Taking away Link 16 makes our defensive challenge far more difficult and makes it far more expensive in terms of casualties” in any future conflict with China.

Today, the U.S. military has applied this concept to what it calls network centric operations.

Network-centric warfare gives military forces the ability to “synchronize action, without necessarily having to wait for orders, which in turn reduces their reaction time,” Stokes wrote in a recent paper for the Project 2049 Institute, where he is an analyst.

The communications also are used in missile defenses, which require rapid transference of data on targets to guidance systems.

no_name said:
At 0.66m I'm not sure if it could be quad-packed, maybe if they have a finless or retractable variant.
Click to expand...

no doubt it would be a different variant of SD-10 (e.g. retractable) .. it's very obvious and logical

The site where I got this says it's the DF-21D ASBM or it's something new. 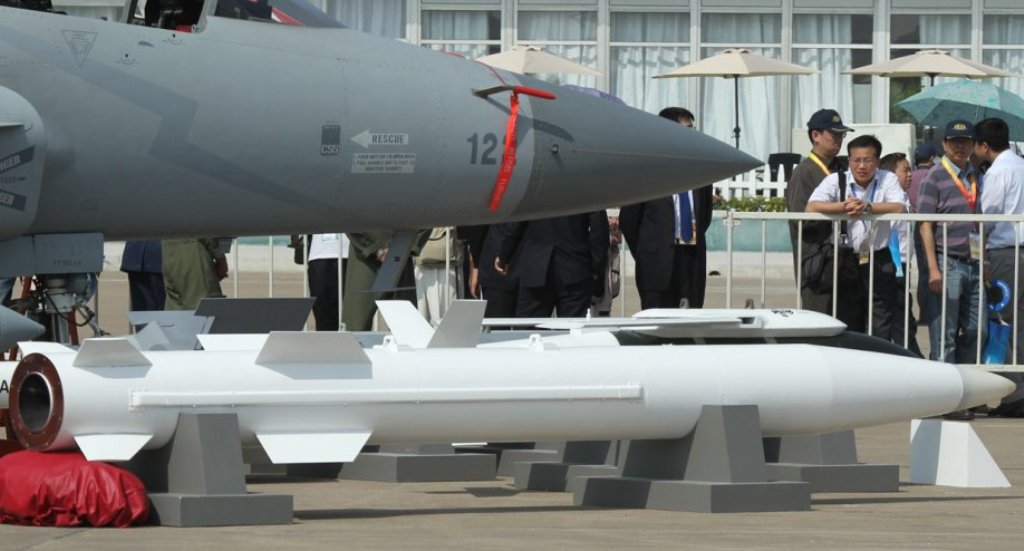 It could be. Here's a pic to compare it with.
You must log in or register to reply here.