To avoid collateral damages to the tow plane and other things on the ground, the warhead of the "training" missile is probably substituted with steel weight.
Last edited: May 26, 2020

xyqq said:
To avoid collateral damages to the tow plane and other things on the ground, the warhead of the "training" missile is probably substituted with steel weight.
Click to expand...

Likely still in the stage where the accuracy of the target interception is being tested. An explosion just before the impact would mess up the visuals.

In addition to what others have said, it looks like this target is being towed by a small light aircraft, likely unmanned.

For the purposes of testing a missile in those circumstances where you don't want to also lose/damage the towing aircraft, there's probably no reason to give your missile a warhead.

That said, do we have footage of that particular missile being fired from a helicopter and confirming it is indeed a TY-90? It's rather small and I can't seen any fins, but then again it might just be that the camera quality and framerate means it can't capture the speed those details at those speeds.
P

by78 said:
A TY-90 missile hitting a target during practice. TY-90 is designed to be carried by helicopters. 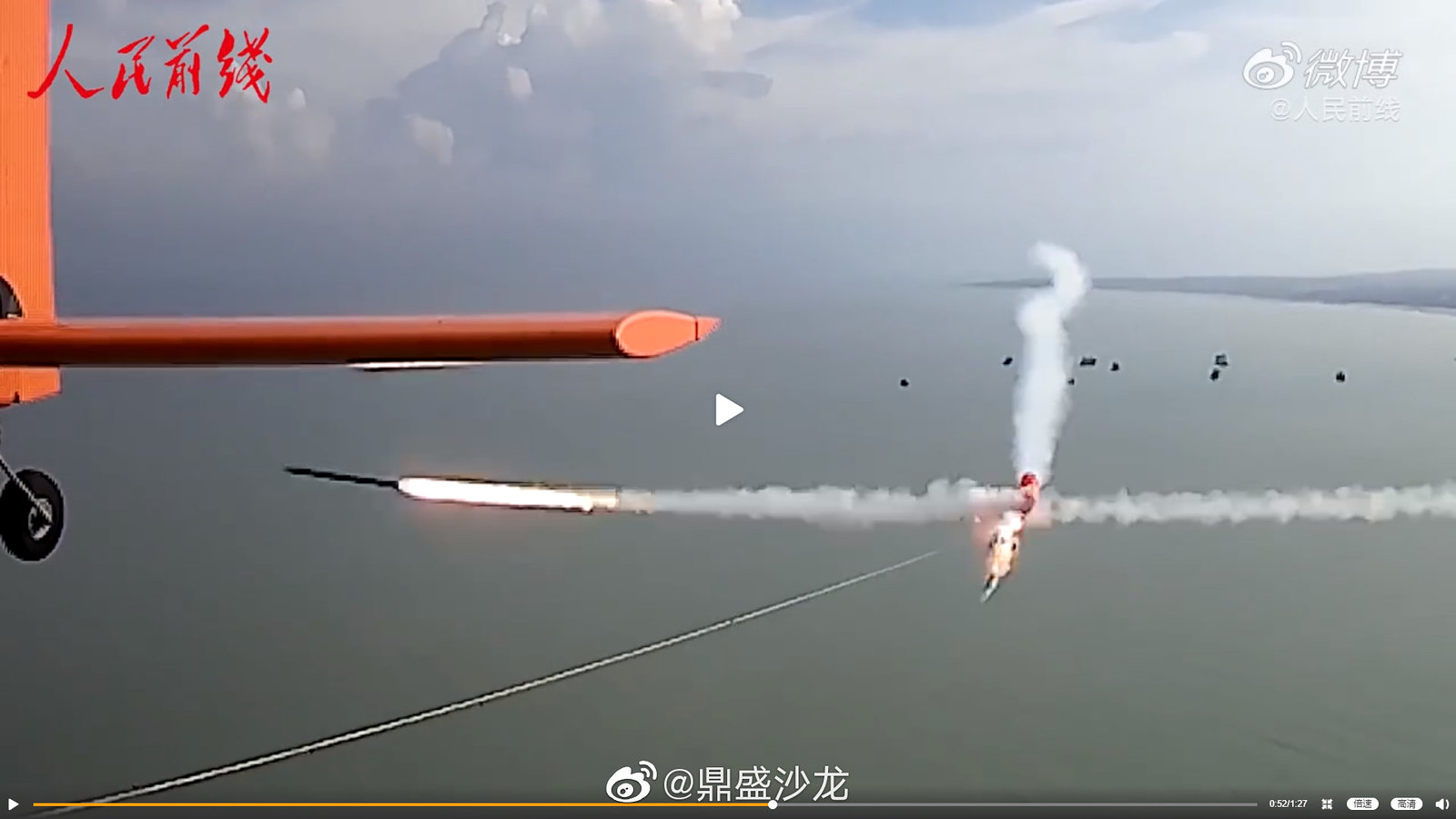 Have you got a link to the video?

Pba_target said:
Have you got a link to the video?
Click to expand...

Unfortunately no, not for this particular video. But footage of TY-90 detonating against targets are not hard to come by. Below is such a video (around 1:15 mark).

Staff member
Super Moderator
Registered Member
A new and most likely older image of the PL-XX (PL-17, PL-20 or PL-21) Ultra-long-range-AAM carried by a 'PLAAF J-11B.
(Image courtesy of LXFFJBSX via Huitong's CMA-Blog)

Excellent read on China AAM missile development and history The era of 1960 to 1980 was difficult years for China missile development lacking the industrial base( IC production) and theory of Missile technology. But as always help came from unexpected sources. The Taiwan and Vietnam war suddenly make the US missile technology available in the form of unexploded missile stuck in the J5 fuselage. What a struck of luck Of course they dismantle it and send it to Soviet Union for reverse engineer . But in itself is not much of a help without Chinese own effort and the tireless and difficult sacrifice that thousand of bright and hardworking engineer, scientist and industrial worker make over the years Amazing Now China has modern missile and radar technology entirely of her own and on the cusp of breakthru that will exceed US and the west missile technology. Any effort to retard the progress will be exercise in futility the train has left the station. Here the conclusion of the report drawing on Chinese publication

China’s air-to-air missile design and production capabilities have made significant progress in recent decades. Until the late 1980s, the most advanced Chinese missile factories were capable of producing was a reverse-engineered copy of the original AIM-9 Sidewinder, which entered service in the USAF in the mid-1950s. China is now capable of producing missiles that appear to be comparable in capability to the AIM-9X and AIM-120 AMRAAM. In combination with more capable fighter aircraft and improvements in training, Chinese air-to-air missiles are providing the PLA’s aviation forces with a hitherto unseen level of combat capability. In addition, China is developing very long-range air-to-air missiles with ranges of 300 km or more. Such missiles would provide the PLA with a capability that the U.S. military does not currently possess. As a result of these advances, the United States can no longer assume that it has a dominant advantage over China in air-to-air missiles.

Maintaining the U.S. lead in this area will require continual investment in new and more capable systems. iii In addition, countermeasures may become increasingly important, such as the capability to blind, “dazzle,” or even shoot down missiles with airborne lasers.iv China’s advances in air-to-air missile technology may result in greater exports of Chinese missiles and fighter aircraft. Air-to-air missiles have already become a significant export item, with Pakistan, Bangladesh, and Nigeria all purchasing Chinese missiles to arm Chinese-built aircraft. The PL-10 and PL-12, in particular, appear to be meant as rivals for the AIM-9 and AIM120 series IR- and radar-guided AAM families that dominate global markets. While it is unlikely that China’s missiles will be adopted by U.S. allies, their increasing sophistication may help drive sales of Chinese-built fighter jets and related systems to other countries.

A key issue in the future may be China’s ability to overcome increasingly stringent U.S. technology transfer restrictions, which Chinese media describes as a “foreign technology blockade” [国外技术封锁]. Restrictions on foreign technology, for example, were cited as a primary reason that China needed longer than planned to develop modern AAMs with anti-jamming capabilities, such as the PL-12 and PL-9. Were it not for sales of airborne radars, licensed production, and transfer (legally or illicitly) of high-tech materials science, China’s air-to-air missile program would likely be significantly behind where it is today. The question now is whether China’s domestic capabilities to design and manufacture components such as microprocessors are sufficiently advanced that it is no longer dependent on foreign technology or inputs. In the nearterm, however, China’s air-to-air missile capabilities present a significant challenge to U.S. air dominance.

The PL-15 is believed to be equipped with an improved AESA radar seeker and upgraded jamresistant datalinks. Like the PL-12, the PL-15 is also expected to employ a composite guidance system that features both mid-course and terminal guidance. Its mid-course guidance capability would enable the missile to receive course correction information in flight from a standoff AEW&C aircraft such as a KJ-2000, without requiring the missile’s launch platform, such as a J31 stealth fighter, to turn on its own radar and risk giving away its position.

According to Janes Defense Weekly, the PL-15 might have already entered PLAAF service as of July 2017.

PL-21 (PL-XX) The PL-21 (also referred to as the PL-XX, since the missile’s actual designation, or even its existence, cannot be confirmed) is said to be a ramjet-powered active radarhoming very long-range air-to-air missile (VLRAAM) under development with performance characteristics roughly comparable to the American AIM-120 AMRAAM, DARPA's Triple Threat Terminator (T3), Europe's MBDA Meteor, and the Russian Vympel R-77. The existence of the missile has never been confirmed in reliable Chinese sources, although there are strong indications that China had been making serious efforts to develop a ramjet-powered AAM. In May 2017, for instance, the state-owned Science and Technology Daily newspaper reported that the 4th Research Institute of the China Aerospace Science and Technology Corp. (CASC) had successfully tested a ramjet engine designed to power air-to-air missiles. In a separate Global Times report, the engine was claimed to be hypersonic (Mach 5+), which would make it a scramjet. Moreover, the new engine was said to be able to more than triple the range of existing Chinese BVRAAMs, to over 300 kilometers.149 Notably, a display graphic at the 2014 Zhuhai Airshow appears to show a J-31 fighter carrying four unidentified missiles fitted with ramjet engines. The new missile appears significantly larger than any known Chinese AAM, such as the PL-12 or the PL-15.150

PL-10 The PL-10, and in particular the PL-10E variant, is currently China’s most advanced SRAAM. The missile was developed by the CHINA AEROSPACE STUDIES INSTITUTE 37 Shanghai Academy of Science and Technology, with Liang Xiaogeng [梁晓庚] (profiled below) credited as the missile’s chief designer. The missile appears to have been partially based on the South African Denel A-Darter AAM. The design of the original “A” variant was finalized in 2010 and entered production in 2013.

The latest “E” variant was first unveiled at the 11th China International Aviation and Aerospace Exhibition in Zhuhai in 2016. The PL-10E weighs 105 kg and has a range of 20 km. The missile can be slaved to a helmet-mounted sight, giving the pilot “look and shoot” capabilities. The design incorporates thrust vectoring technology to help it achieve high maneuverability and the missile can withstand 60 Gs and achieve high angles of attack. According to its designer, the PL-10E has superior anti-jamming abilities.132 Importantly, the PL-10E can attack targets at significant off-boresight angles “several times” greater than the 30 degrees typical on missiles of the previous generation. For comparison, the AIM-9X-2 Sidewinder's IR sensor is capable of tracking targets up to 90 degrees off-bore.

The missile also incorporates a more advanced IR sensor that images the entirety of its target, rather than focusing on a specific salient IR source, giving it true all-aspect targeting capability. Reports also indicate that the missile can be mounted on second- and third-generation fighters with modifications. In simulated air combat, the PL-10E hit a target at a range of 20 km and bearing [方位] of 38 degrees off boresight. It was reportedly able to “turn at nearly a 90-degree angle and was not fooled by infrared decoys.”133 The PL-10 was first shown being used in live-fire exercises in 2016 during the “Red Sword”

Bltizo said:
From my twitter, cross posted cause I'm lazy..

Specifically this bump definitely isn't on the real thing.
It is smaller than F-35A or Su-57 gun bumps, but it is more noticeable than F-22s gun location which is *very* subtle.
Not conclusive obviously, but I'm sure that difference isn't there by accident

Recall this rumour on CD:

please do not act annoyed as I wasn't trying to offend. isn't this forum a place to share thoughts in a civil manner? and excuse me if this topic had been discussed ad nauseum, I simply wasn't aware. But I'll stop. I'm not annoyed and I also do not feel offended, all I wanted to note is that...
www.sinodefenceforum.com

I remembered the rumour said the new J-20A with WS-10 engine has six PL-15, however I went back to confirm and in fact it just says "加两个蛋" or "add two more missiles". I assumed at the time the "add" part means PL-15 but in rumour doesn't actually say that.

please do not act annoyed as I wasn't trying to offend. isn't this forum a place to share thoughts in a civil manner? and excuse me if this topic had been discussed ad nauseum, I simply wasn't aware. But I'll stop. I'm not annoyed and I also do not feel offended, all I wanted to note is that...
www.sinodefenceforum.com

I remembered the rumour said the new J-20A with WS-10 engine has six PL-15, however I went back to confirm and in fact it just says "加两个蛋" or "add two more missiles". I assumed at the time the "add" part means PL-15 but in rumour doesn't actually say that.
Click to expand...

It's been predicted for two years or so that there will be a new missile that allows carriage of 6 BVRAAMs.

However I doubt there is any change in the dimensions of the weapons bay
You must log in or register to reply here.