Registered Member
Well my main point was that the signal overlay issue which in truth is exquisitely important to both Europe's and China's national security, has somehow been swept under the rug. I guess the striking-out-on-your-own point is also worth noting, though as pointed out numerous examples of this exist already. It looks like Europe's PRS bands (govt/military only) overlays China's govt/military bands, which means Europe cannot jam Compass' military bands without jamming its own PRS signals and the US cannot jam Compass' military bands without jamming Europe's PRS signals. I have little doubt the US will try to jam Compass regardless in time of war, but Europe is certainly in a bind, with no real way out of its predicament. A giant middle finger from China that seems to be well-worth $230 million.

That's an issue I covered before, the basic technology is all based on the same root so a denial of service attack like attacking other nations GPS systems is counter productive.

BEIJING – China is developing an advanced new spaceship capable of both flying in low-Earth orbit and landing on the moon, according to state media, in another bold step for a space program that equaled the U.S. in number of rocket launches last year.

The newspaper Science and Technology Daily cited spaceship engineer Zhang Bainian as saying the new craft would be recoverable and have room for multiple astronauts.

While no other details were given in the Tuesday report, Zhang raised as a comparison the Orion spacecraft being developed by NASA and the European Space Agency. The agency hopes Orion will carry astronauts into space by 2023.

China’s Shenzhou space capsule used on all six of its crewed missions is based on Russia’s Soyuz and is capable of carrying three astronauts in its re-entry module.

China came late to crewed space flight, launching its first man into space in 2003, but has advanced rapidly since then. In its most recent crewed mission, two astronauts spent a month aboard a Chinese space station late last year.

A fully functioning, permanently crewed space station is on course to begin operations in around five years and a manned lunar mission has been suggested for the future.

Now firmly established among the big three in space travel, China last year moved ahead of Russia for the first time in number of rocket launches and equaled the United States at 22, according to Harvard University astrophysicist Jonathan McDowell.

Russia had 17 launches, while the U.S. might have had several more if Space X’s Falcon 9 rocket fleet hadn’t been grounded following a Sept. 1 launchpad explosion.
Click to expand...

The CZ-11 is developed by the China Academy of Launch Vehicle Technology (CALT) with the goal to provide a quick-reaction launch vehicle, which is easy to operate, cost-efficient to launch, can remain in storage for long period and reliably launch on short notice. Reportedly, the payload is about 1000 kg.

It consists of four solid-fueled stages. It uses the largest solid rocket motor developed in China so far as first stage. With a diameter of 2 m, it is likely based on the
Please, Log in or Register to view URLs content!
missile. The vehicle is cold launched from a launch tube mounted on a road mobile vehicle.

Both a 1.6 m and a 2.0 m diameter payload fairing are available for the CZ-11 launch vehicle.

The maiden flight took place in September 2015 from Jiuquan. 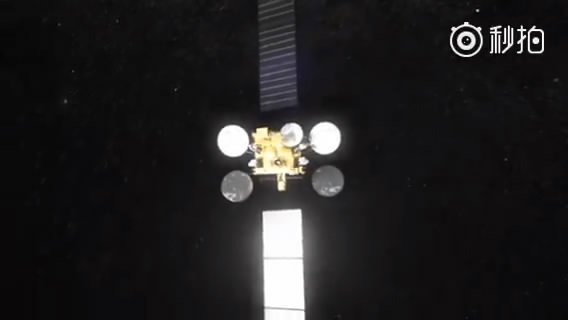 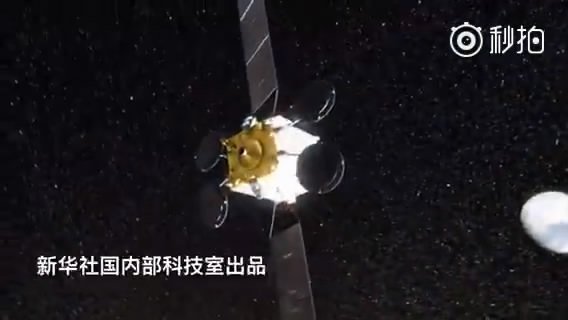 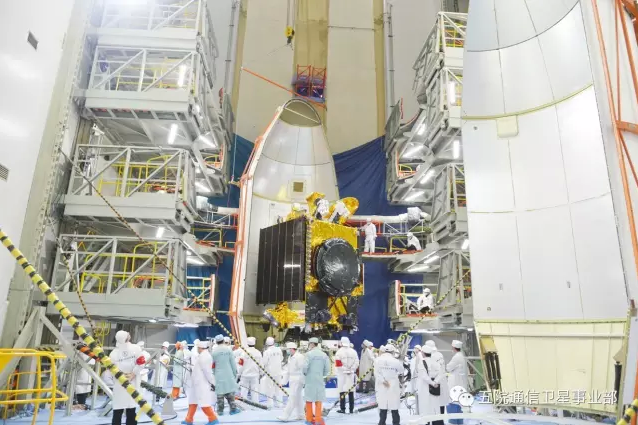 Triumph of Robert Goddard's idea over 100 years ago. Another case of what seemed like science fiction becoming reality with NASA and now China Space.
D

Blackstone said:
Triumph of Robert Goddard's idea over 100 years ago. Another case of what seemed like science fiction becoming reality with NASA and now China Space.
Click to expand...

It was science fiction.

Apparently this SJ 13 is high output communication satellite enable people on moving transportation to communicate. Chinese satellites are getting better and closing the tech gap with the west. Henri K take on the launch

This satellite is the first satellite called HTS (High-throughput satellite) designed by the CAST Institute of the Chinese aerospace group CASC. It is characterized by a much higher transmission capacity, at more than 20 Gbit / s, which is the sum of all Chinese communications satellites currently in orbit. The satellite also implements many new industrialized technologies in China.

The start
Designed by the CALT (China Academy of Launch Vehicle Technology), a subsidiary of China Aerospace Group CCAC, the CZ-3B is the most powerful version of the launcher family CZ-3A that are dedicated to geostationary launches.

This rocket, which is more than 57 meters high and 459 tonnes on take-off, is capable of placing 5,500 kg of payloads in GTO orbit. Before the heavy launcher CZ-5 , which has just completed somehow its maiden flight in November 2016 (see our article "
Please, Log in or Register to view URLs content!
"), the CZ-3B was The most powerful rocket for geostationary launches.

This is the 39th launch of this Chinese rocket, which totals 38 successes and 1 failure. Indeed, the first shot of the CZ-3B in February 1996 was a bloody failure - the CNG of the rocket deviated its trajectory by mistake and the latter exploded while hitting the mountain with all its propellant, which caused the death Of 6 people and becomes the most deadly incident in the history of Chinese aerospace.


Please, Log in or Register to view URLs content!
The take-off of the CZ-3B carrying the SJ-13 satellite (Photo: CASC)

The television report of this launch mission under code 07-77:


Two airmail messages (NOTAMs) have been published for this launch that signal two areas of fallout.


Please, Log in or Register to view URLs content!
The launching trajectory and the two fallout zones in yellow.

The experimental communication satellite SJ-13
For the first HTS Chinese communications satellite, SJ-13 with a total mass of 4600 kg, is developed from a platform DFH-3B , designed for a lifespan of 15 years.

The satellite is equipped with an electric propulsion, with 4 xenon ion engines Chinese LIP-200 , used in the orbital maintenance, while the altitude change is always assured by chemical propellant engines.

The use of this new type of propulsion will significantly reduce the mass of propellant to be carried by a satellite. Only about 100 kg of xenon is required for the orbital maintenance of the SJ-13 for 15 years, compared with 675 kg of conventional propellant before.

The new feature of the SJ-13 is its multi-beam payloads in Ka-band, which, according to several official announcements, are installed for the first time on a Chinese satellite. They achieve a capacity of more than 20 Gbit / s, exceeding the total capacity of all Chinese communications satellites combined.


Please, Log in or Register to view URLs content!
The coverage of communication satellite SJ-13 in light blue.

With this transfer capability, passengers on an airliner can benefit, for example, from a 400 Mbps downlink WiFi network. This service will also be able to benefit those who travel on the vast Chinese rail network.

The chief engineer of the SJ-13 satellite admits that 20 Gbit / s is still far from 80 or 140 Gbit / s of the other Western HTS satellites, but explains that this satellite is partially experimental. So once the tests have been successful, the team will quickly cross the 100 Gbit / s bar.

The SJ-13 will also conduct a novel experiment for a Chinese satellite in geostationary orbit, performing bilateral laser communications tests at a 2.4 Gbps rate.

This satellite is, according to the press releases, 100% made with Chinese components. This allows the country to be less dependent on foreign countries for certain key components.

Once completed, the satellite will be renamed ChinaSat-16 and will provide commercial communications services for a large area representing more than one third of China.

It is noteworthy that China will launch another experimental HTS communication satellite, SJ-18 , the new space launch center Wenchang.

The launch will be carried out by the heavy-lift CZ-5, a 13-ton GTO, the only Chinese rocket capable of putting a 7-tonne satellite into geostationary transfer orbit.

This second video shows us what the SJ-18 looks like:

Historical statistics
Statistically, this launch of the SJ-13 communications satellite is the 4th Chinese space launch in 2017, the 39ᵉ of the CZ-3B launcher, and the 246ᵉ for the Long March launch vehicle family.

For the time being, the Long Marche rockets of the CASC group total 236 successes and 10 failures, a success rate of 95.93%.

Here are the number and status of Chinese space launches carried out since 1970, including also those that are not carried out by the launchers Long March -

China's first cargo spacecraft Tianzhou-1 is to be launched into space between April 20 and 24. The cargo spacecraft was transferred with a Long March-7 Y2 carrier rocket from the testing center to the launch zone in Wenchang. The transfer took 2.5 hours.

The completion of the transfer signals the Tianzhou-1 mission has entered its launching stage. In the following days, technicians will continue testing the spacecraft and rocket, and inject fuel before the launch, it said. Tianzhou-1 is the first cargo ship independently developed by the country. It is expected to dock with the orbiting Tiangong-2 space lab and conduct in-orbit refueling.
Click to expand... 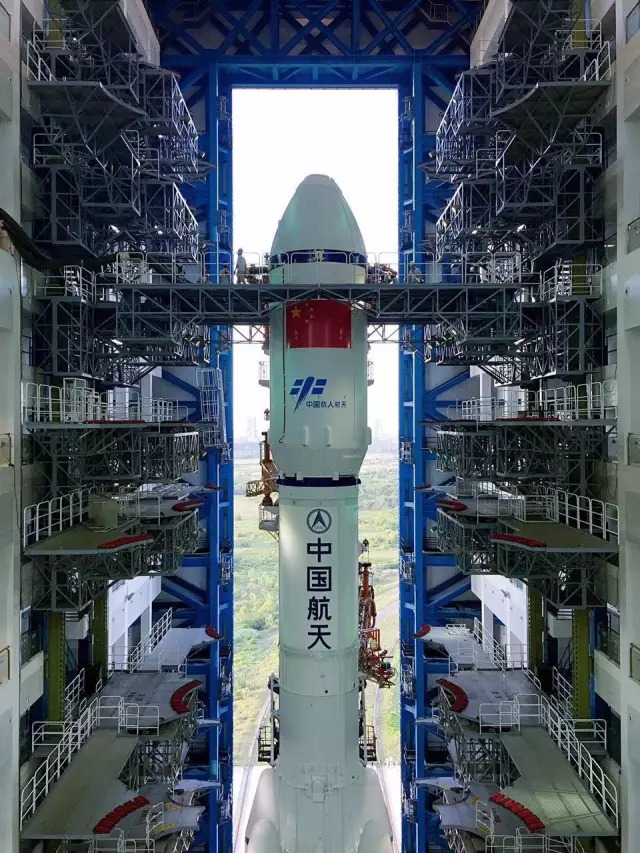 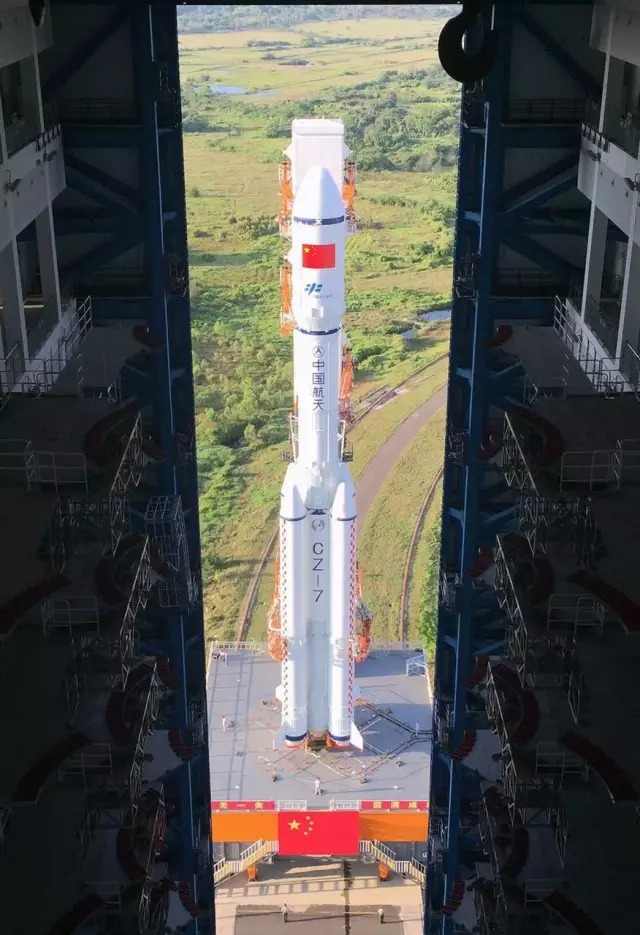 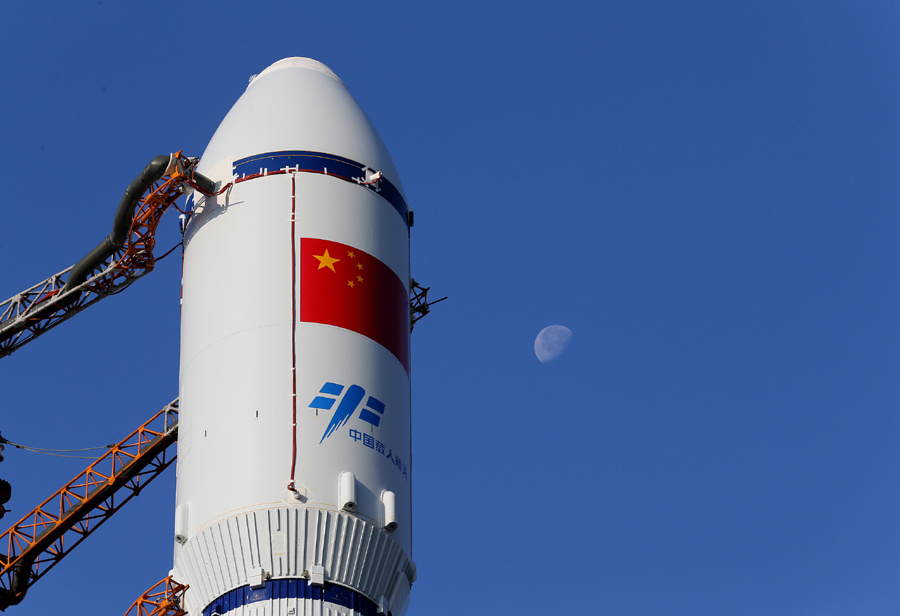 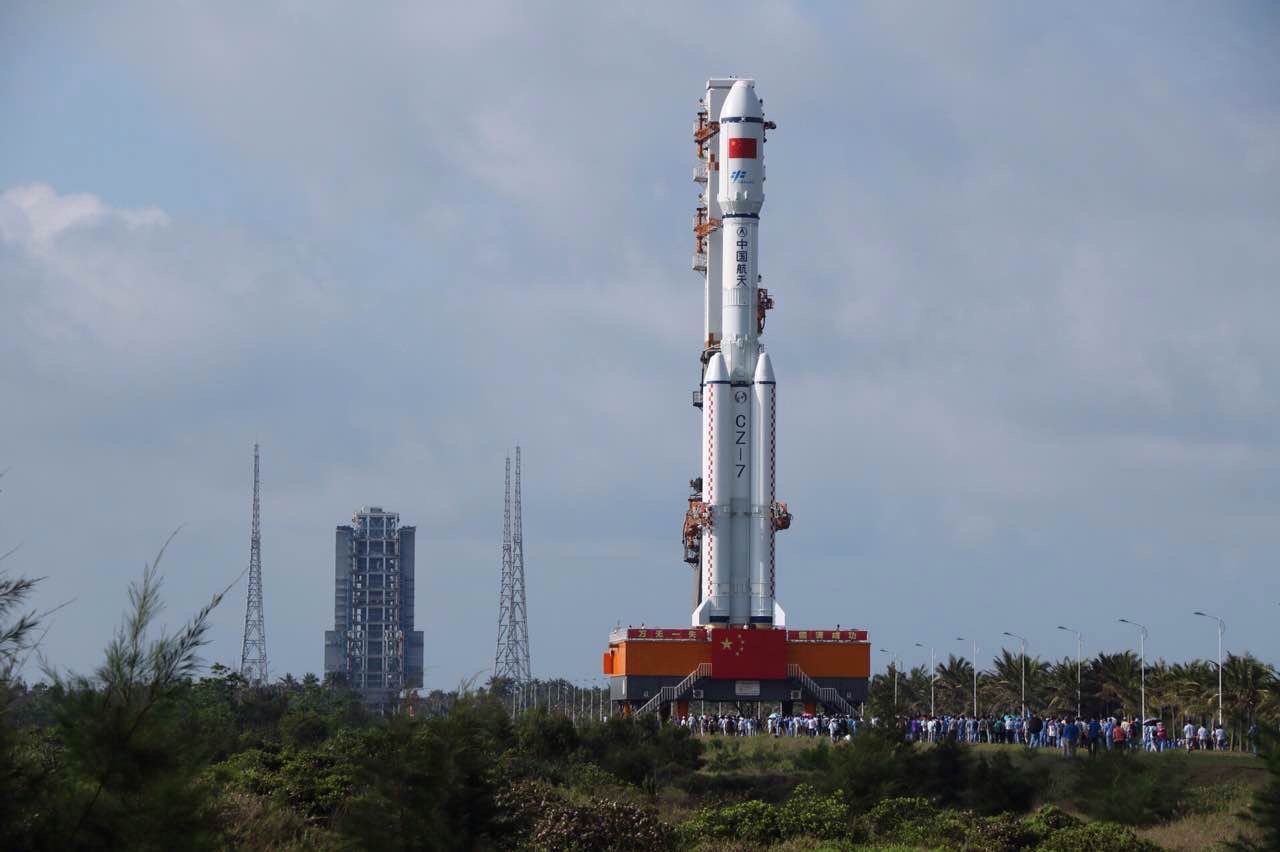 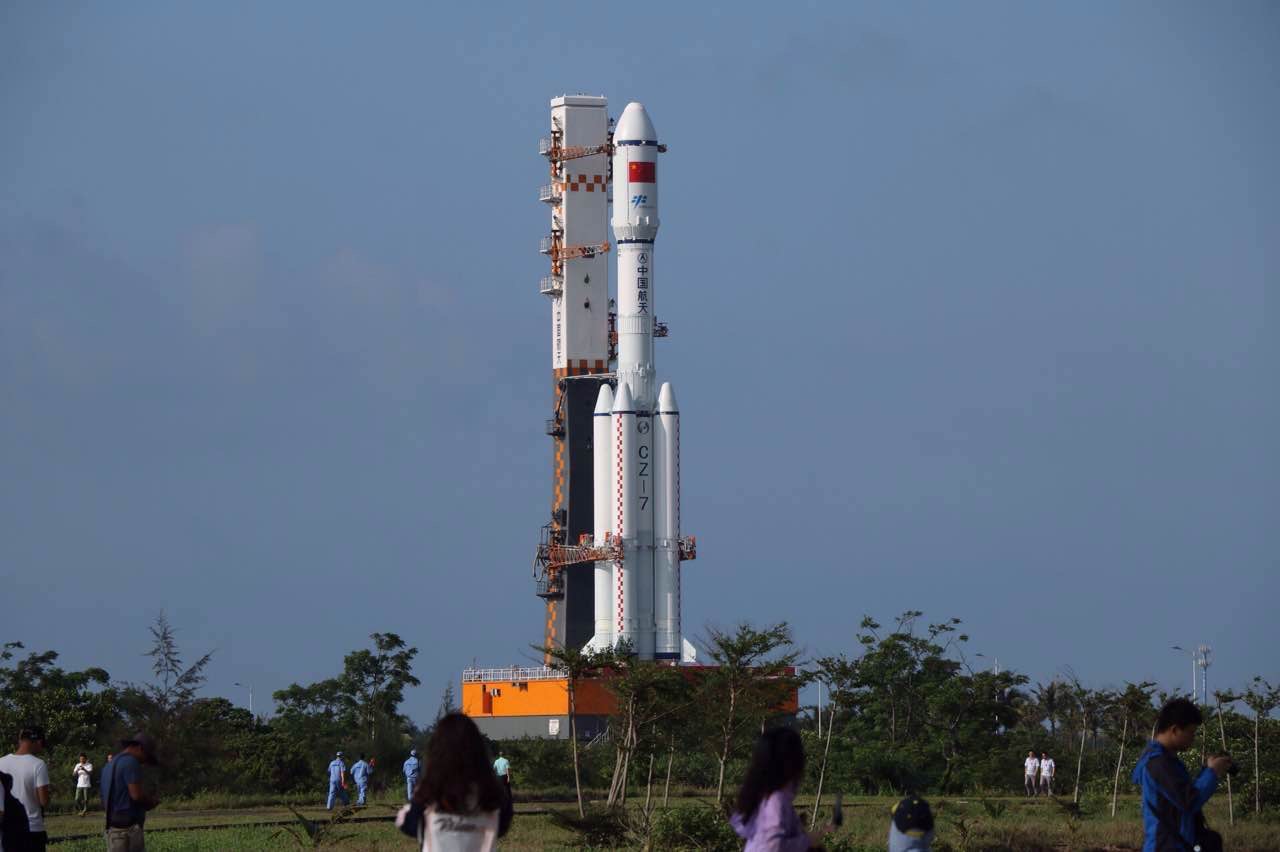 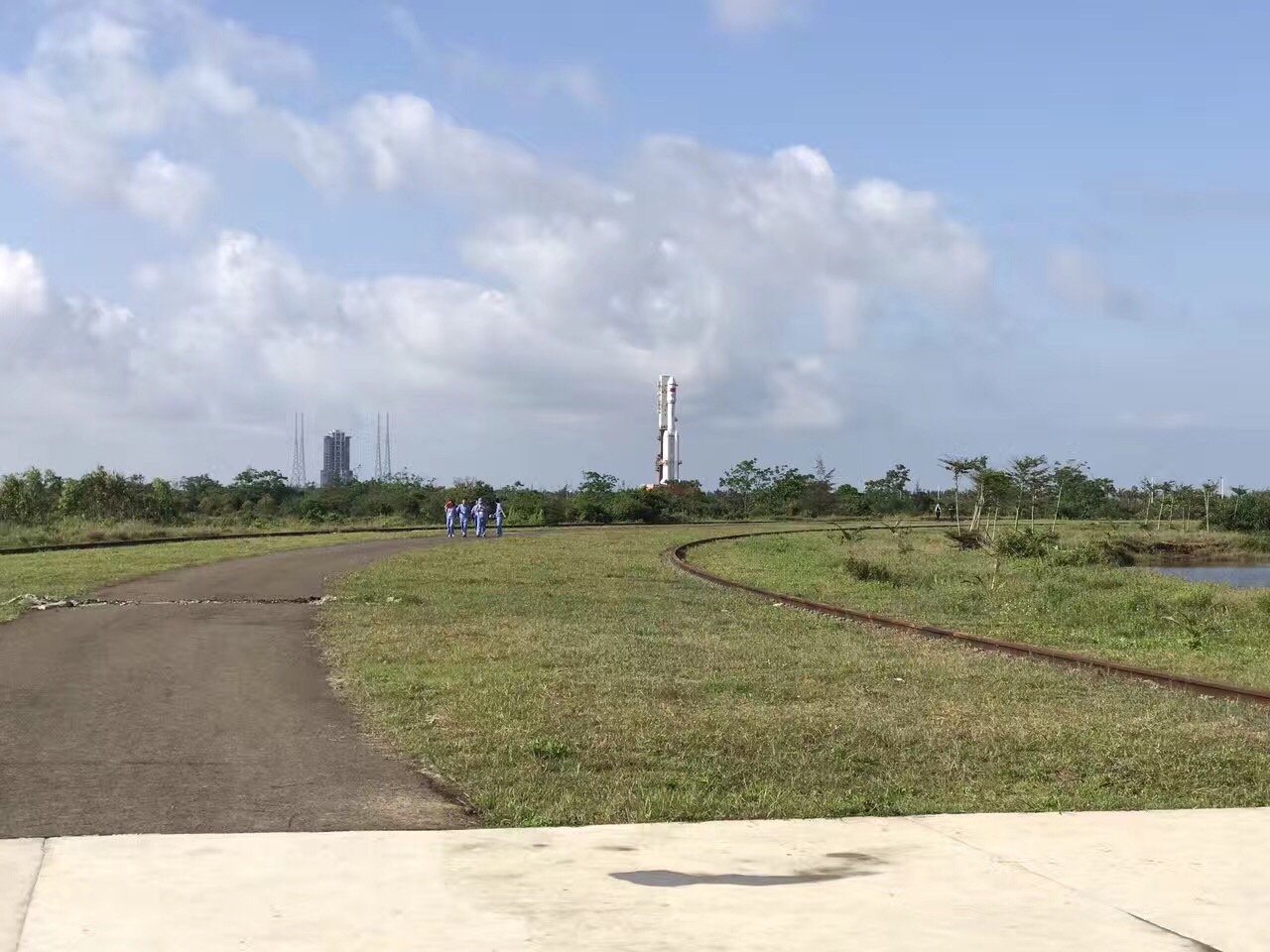 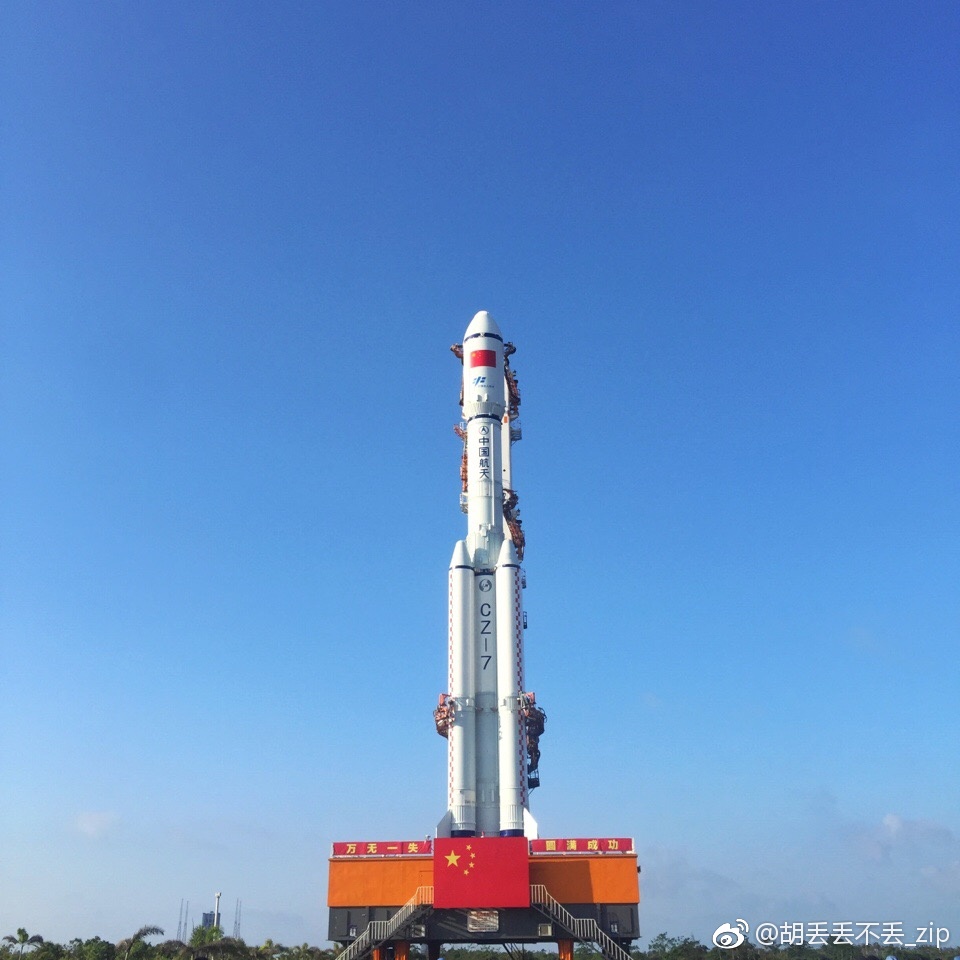 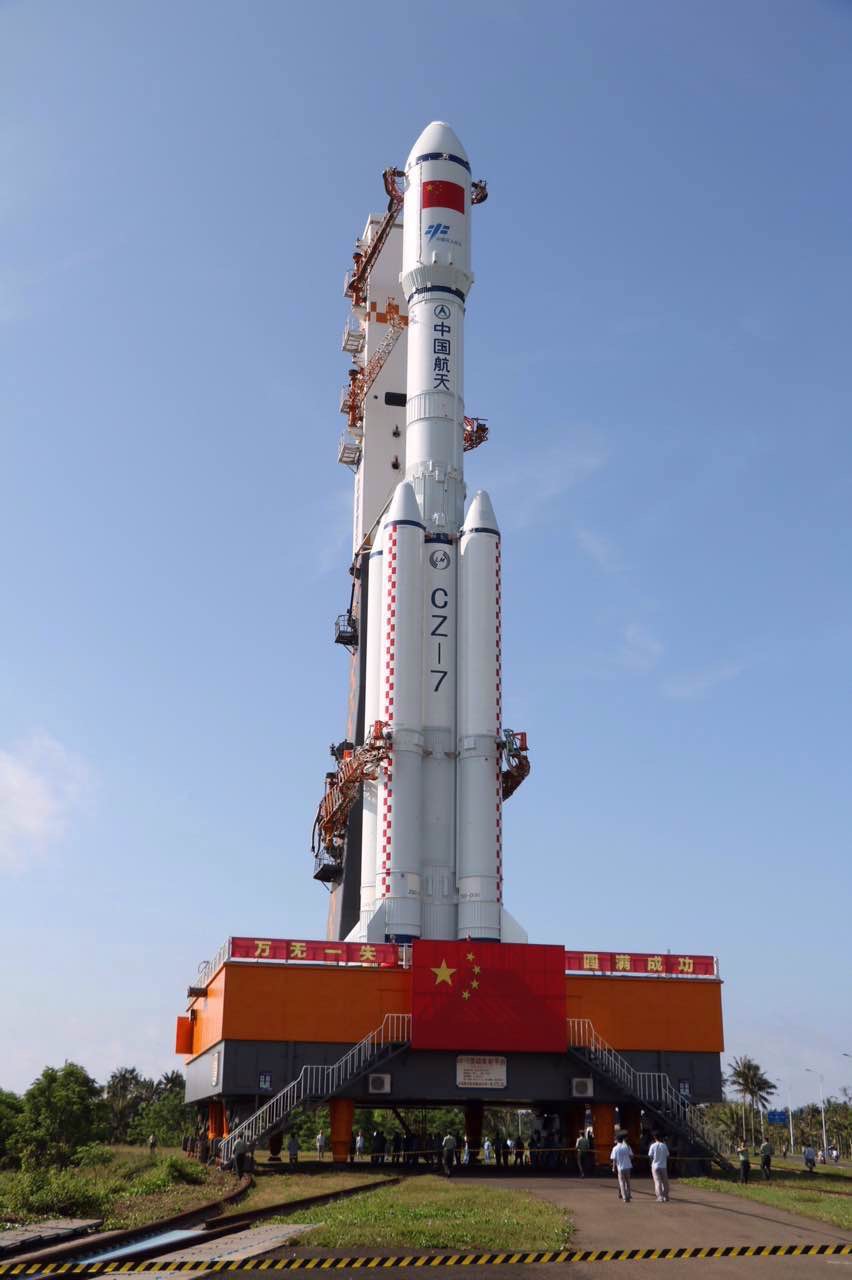 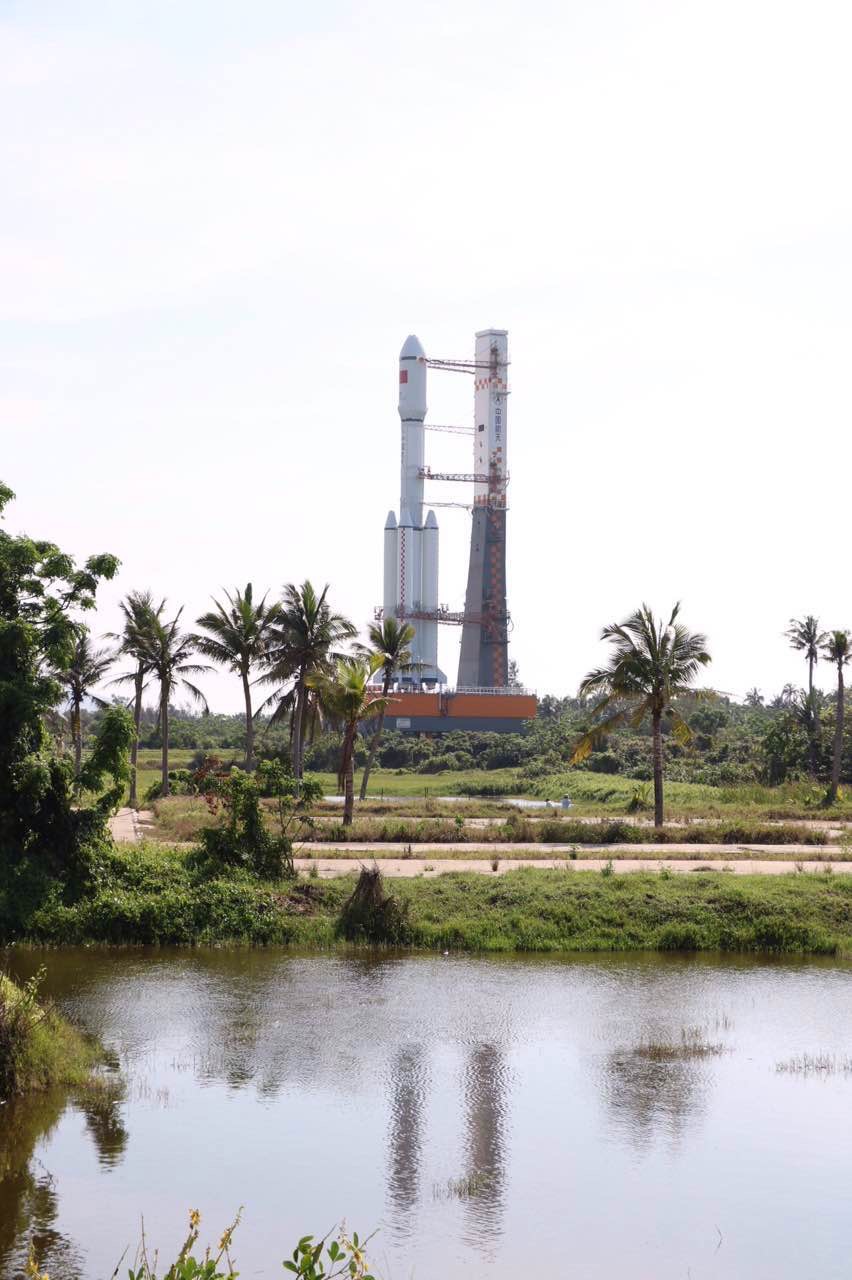 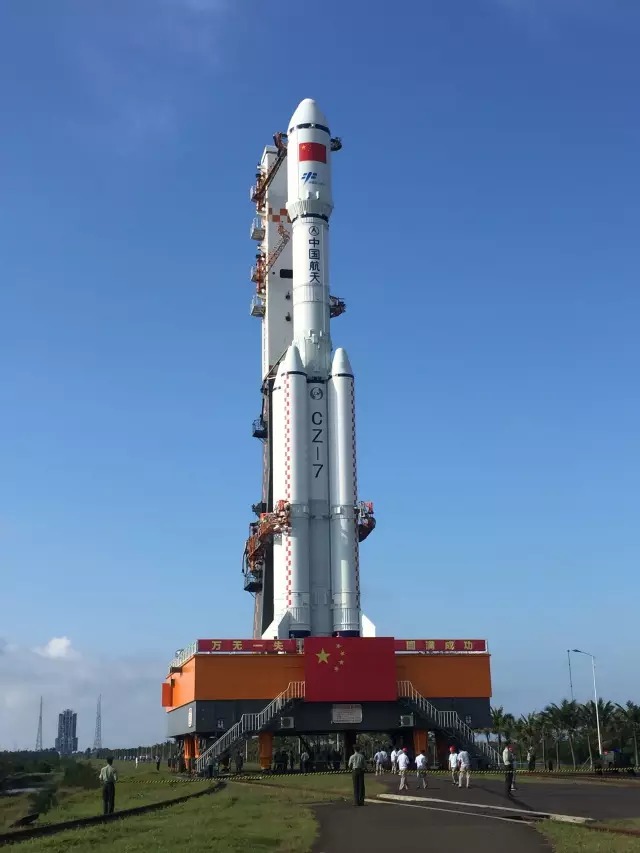 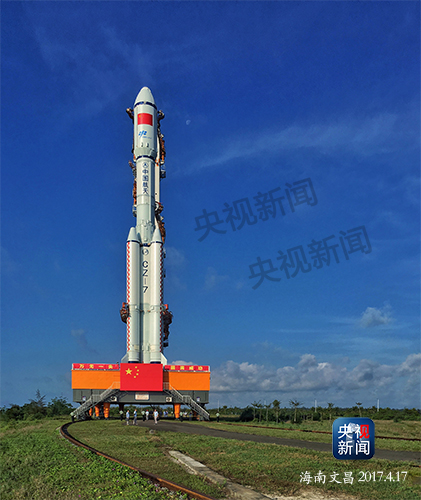 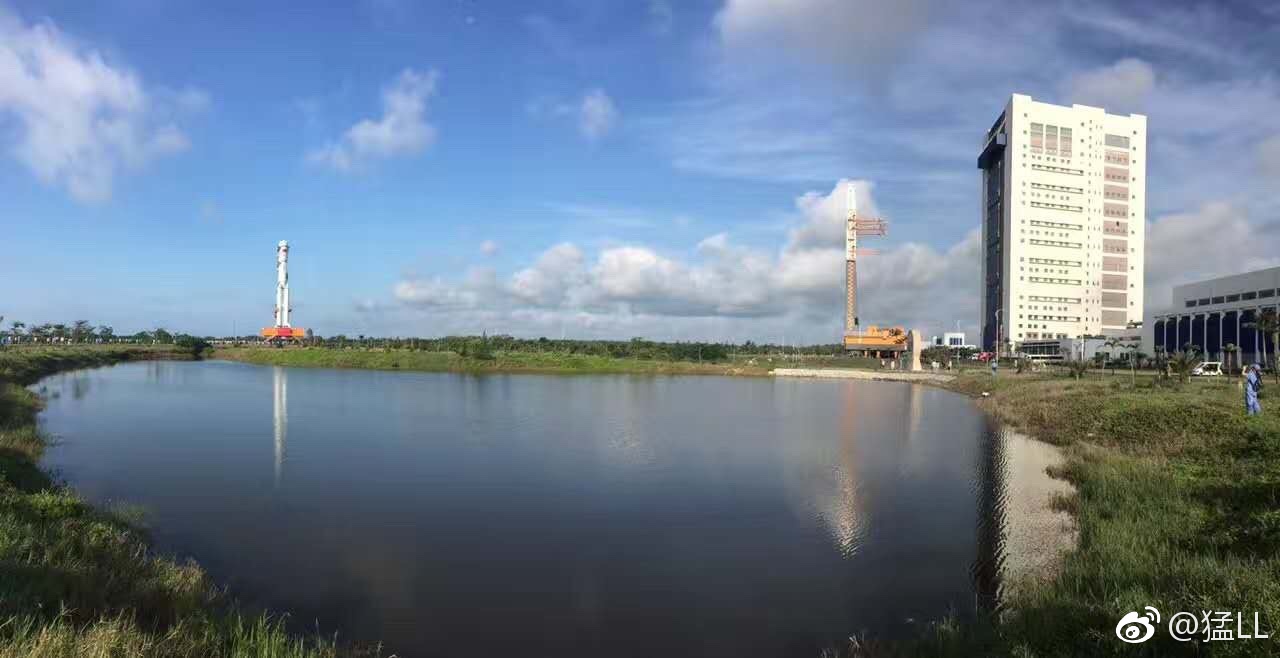 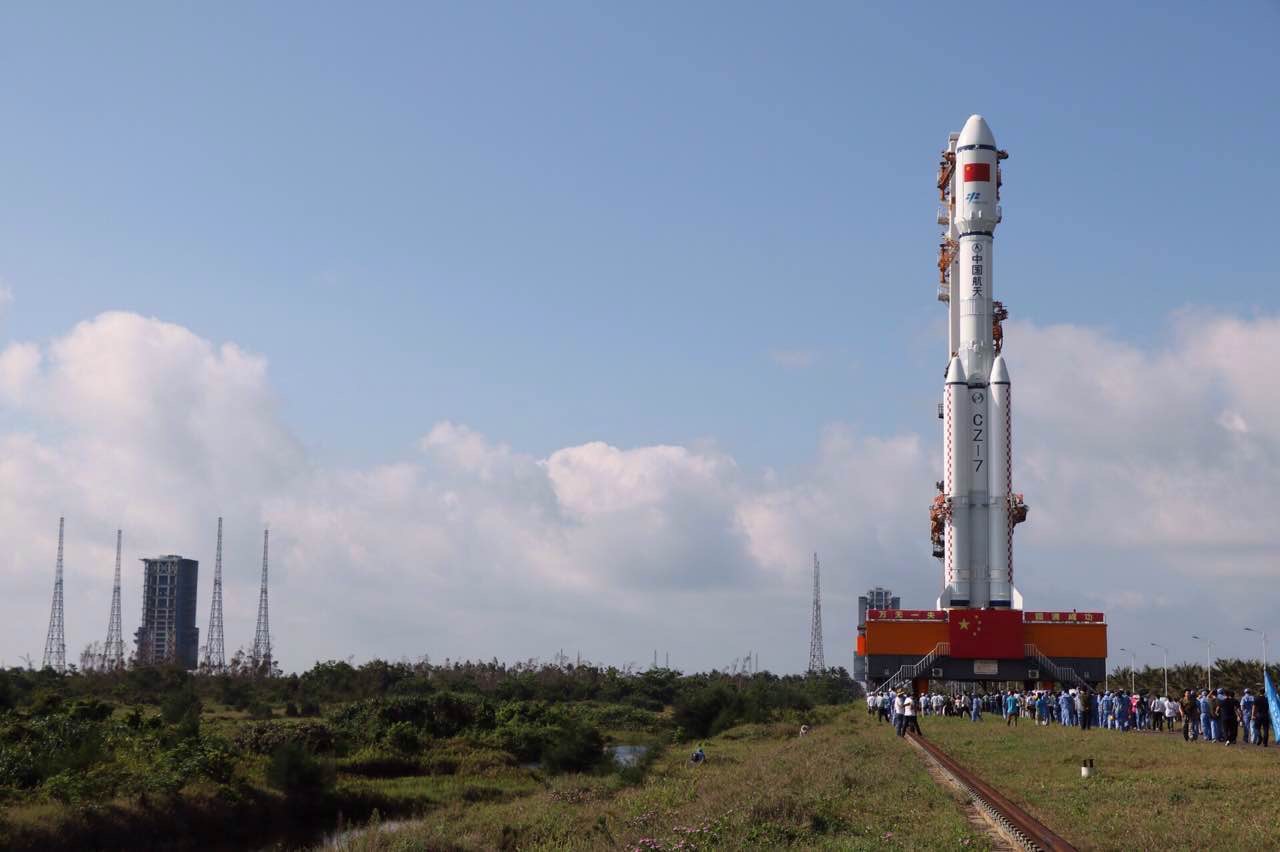 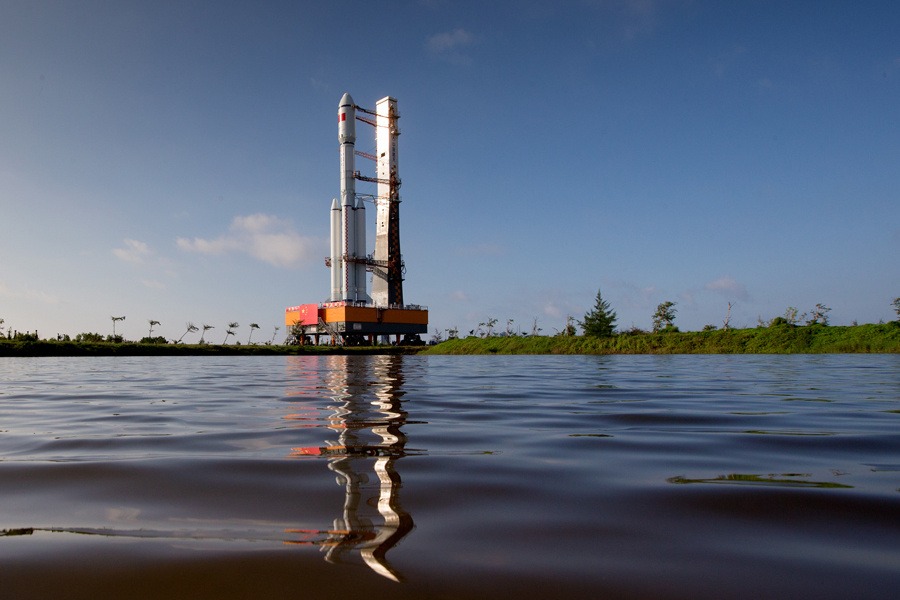