Hyperwarp said:
Not sure where to put this, since it is near space and not outer space. Anyway, posted by @ CDF:
Please, Log in or Register to view URLs content!
???

Translation much appreciated, thank you

Not even technically "near space". The boundary for space is roughly 60 miles or 100 kilometers above sea level. No balloon can reach anywhere close to that due to physics (you can't have buoyancy in a hard vacuum).

With Naga-L Rocket, China Would Turn Tables on U.S. Export Ban:
Please, Log in or Register to view URLs content!

China’s launch-vehicle manufacturer, frustrated with a longstanding U.S. government ban on the export of U.S.-built satellite parts to China, is designing a rocket that would be exported in an attempt to escape the law’s reach.

The China Academy of Launch Vehicle Technology (CALT) said it had started negotiations with authorities in Indonesia, Sweden and Tanzania about hosting the Naga-L rocket, designed to appeal to owners of small satellites headed to low Earth orbit. It was not clear how advanced these discussions are.

In the case of the Esrange facility in northern Sweden, now used to launch stratospheric balloons and suborbital sounding rockets, any orbital launch capability likely would be closely scrutinized by neighboring Norway and Finland.

The two-stage Naga-L, based on components used for heavier-lift versions of China’s Long March rocket family, will be capable of placing a 600-kilogram satellite into an 800-kilometer polar low Earth orbit, without using an orbit-raising stage, when launched from Indonesia, CALT’s Haoliang Yang said here Oct. 14 during the 66th International Astronautical Congress.

The rocket’s basic version will be priced at $10 million per launch, Yang said.

For the past 15 years, the U.S. government has banned the export to China of U.S.-built satellites and satellite components, using the International Traffic in Arms Regulations (ITAR) as the enforcement mechanism.

The ban was originally designed as an attempt to slow development of China’s missile technology by crippling its rocket-launch program. Human-rights issues in China have also been used as an argument for maintaining the prohibition, first instituted in 1999.

The ban has not stopped development of China’s Long March vehicles. Two new versions have been introduced this year and China’s 2015-2025 space development plan foresees 100 launches during that period, just for China’s domestic demand.

With U.S. parts embedded in most telecommunications satellites, the prohibition has, for the most part, kept China out of the global commercial launch market except for nations that have elected to purchase a Chinese-built satellite along with a Long March rocket.

Unable to import satellites, China now wants to export a rocket. “We can export this vehicle to get around the ITAR regulations,” Yang said. “It would only be for commercial launches.” A first launch of the two-stage Naga-L, from China, is planned in 2017, he said.
Click to expand...

escobar said:
Boosted version of LM-6 will make its first flight during the 13th Five Year Plan. it will have a 4t payload capacity to 700 km SSO[/SPOILER]
Click to expand... 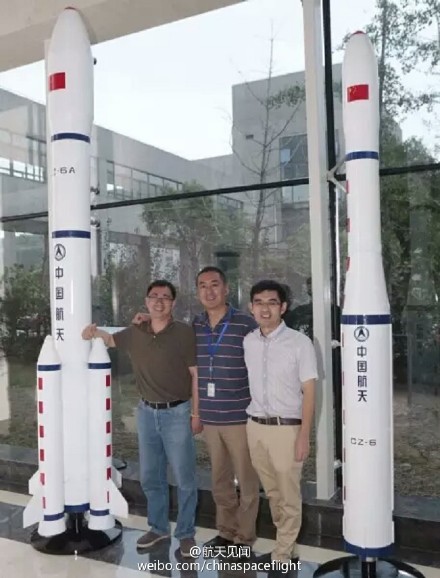 siegecrossbow said:
Not even technically "near space". The boundary for space is roughly 60 miles or 100 kilometers above sea level. No balloon can reach anywhere close to that due to physics (you can't have buoyancy in a hard vacuum).
Click to expand...

Marketing. It does say at least higher than 20 km. Looking like something meant to loiter for long periods of time above and around a fixed spot.

A Long March 3B/E rocket took to the dark skies over China on Friday, lifting off from the Xichang Satellite Launch Center at 16:16 UTC to deliver the APStar-9 commercial communications satellite to a Geostationary Transfer Orbit. Contracted through the China Great Wall Industry Corporation, this launch marked a rare commercial launch of a Chinese communications satellite – also the first Chinese-built satellite to enter the APStar fleet that delivers a variety of communications services to the majority of the world’s population.
...
Conducting a standard ascent mission to GTO, the Long March rocket fired its third stage twice for spacecraft separation approximately 26 minutes into the flight. Confirmation of launch success was provided by Chinese space officials shortly after the successful separation of the satellite occurred.

The contract for the APStar-9 satellite was signed in November 2013 as the first APT Satellite Company mission contracted to a Chinese satellite builder and launch provider. Valued at $211 million, the contract specified an October 2015 launch target, leaving less than two years for the construction of the satellite platform, the integration of the communications payload and pre-launch testing to be conducted. The satellite entered construction in October 2014 followed by the integration of the communications payload and the beginning of end-to-end testing in early 2015.

The satellite arrived at the launch site on August 27 for final processing, propellant loading and integration with the launch vehicle that had been assembled in the weeks leading up to Friday’s midnight liftoff. The launch processing team was deployed to Xichang in the second half of September, in charge of the final preparations of the launch vehicle and facility for this mission that, according to Chinese reports, will be followed in close succession by the next Long March 3B mission involving a Chinese military communications satellite.

The APStar-9 satellite has a launch mass of around five metric tons and is based on the DFH-4 satellite platform supplied by the Chinese Academy of Spaceflight Technology. DFH-4 can accommodate payloads of up to 590 Kilograms, supporting high-performance multi-band communications payloads with a total end-of-life power of 10.5kW delivered by two six-meter solar arrays. The satellite uses state of the art systems to hold its position in Geostationary Orbit with precise three-axis attitude sensing and actuation.

APStar-9 hosts 32 C-Band and 14 Ku-Band transponders. The C-Band payload generates one large beam covering the Asia-Pacific region plus one enhanced beam focused on South East Asia to facilitate video broadcasting, VSAT services and cellular backhaul. The Ku-Band system will deliver coverage to the West Pacific and eastern Indian Ocean with coverage stretching from Japan to Australia and as far east as India and Sri Lanka. The Ku system provides Direct-to-Home Television, VSAT services, mobile communications and telecommunications connectivity to sea-going vessels and airplanes...
Click to expand...

Hyperwarp said:
Not sure where to put this, since it is near space and not outer space. Anyway, posted by @ CDF:
Please, Log in or Register to view URLs content!
???

Translation much appreciated, thank you

It is the first airship which is equipped with sustainable power and whose flight can be controlled. The airship is loaded with systems of wideband communication, Data Relay, high-definition observation and spatial imaging.

The airship is flying at the designed height and runs well."Yuanmeng" is a colossal silvery airship and occupies 180,000 cubic meters. With the lift of helium, it rose to the air, and then it is mainly powered by solar energy. The airship will stay near space for 48 hours according to the plan.

Near space is the region of Earth's atmosphere that lies between 20 to 100 km (65,000 and 328,000 feet) above sea level. Impeded by the height and air density of the region, traditional aircrafts find it difficult to enter the region, said Yu Quan, an academician of Chinese Academy of Engineering.The airship can carry out multiple tasks."The biggest challenge for the near-space airship is the big temperature difference in the day and night," Yu said. (People's Daily Online)

Any idea which rocket version will be used?

Also, does China have any plan to develop reusable rockets?

t2contra said:
Any idea which rocket version will be used?

Also, does China have any plan to develop reusable rockets?
Click to expand...

If the following report is to be taken seriously, maybe the rocket will use Russian rocket engines as a way to go around the ban? "We are talking about an agreement to deliver Russian rocket engines to China, as well as counter deliveries of Chinese microelectronics we need in spacecraft development," Rogozin said after meeting Chinese Vice Premier Wang Yang.

Rogozin opened the second China-Russia Exposition in Harbin, the capital of the northeast Chinese province of Heilongjian bordering Russia, alongside Wang Yang, on Monday.

The fair will last till Friday, over 10,000 businessmen from 103 countries are reported to be attending the trade fair's opening day.

Last year's successful negotiations between Russia and China on expanding cooperation in the space industry resulted in the implementation of joint projects in the sphere.
You must log in or register to reply here.