styx said:
quick question: why China is parallel developing two mobile icbm (df-31ag and df-41) even if it has a very tiny nuclear arsenal (about 300 warheads in total)?
Click to expand...

DF-31A/AG is already relatively compact +10.000km ICBM but I wouldn't be too surprised if we see Midgetman style SICBM replacing DF-31 series at some point now when they got DF-41.

styx said:
quick question: why China is parallel developing two mobile icbm (df-31ag and df-41) even if it has a very tiny nuclear arsenal (about 300 warheads in total)?
Click to expand...

Registered Member
QUOTE="styx, post: 575209, member: 369"]quick question: why China is parallel developing two mobile icbm (df-31ag and df-41) even if it has a very tiny nuclear arsenal (about 300 warheads in total)?[/QUOTE]

This extract below might be useful as part of the answer that you want.

When China was still almost in stone age condition in 1960s, China still developed the Hydrogen Bomb 3.3 Mtons just 32 months in June 1967 after China first fission bomb. China was using teams of Chinese working away at abacus as they had no computers or even electronic calculators then.

We all know China is a lot more advanced since the mid 60s.

We all know China is a lot more advanced since 1995.

And remember the DF5s and DF31AG as well. About 100 or more of them, mirving 10 nukes or more.
China has at least three brigades of DF-5 missiles. Assuming all three brigades have been modernized, that's 360 thermonuclear warheads with a half-megaton on each warhead.
3 brigades DF-5B ICBM x 12 missiles per brigade x 10 MIRVs per missile = 360 thermonuclear warheads carried on DF-5B ICBMs 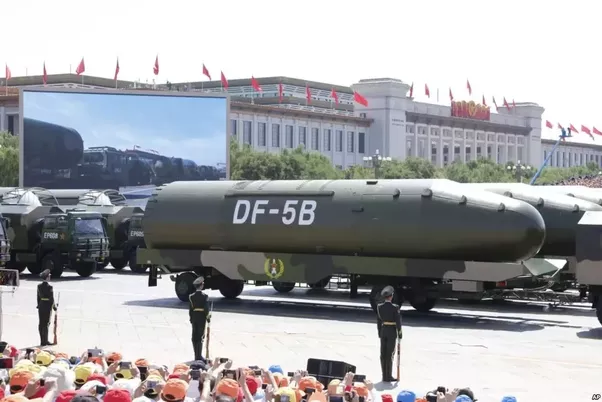 DF-5B got throw weight of 5,000 kgs
In 2017, China successfully completed tests of DF-5C. Presumably with greater throw weight and greater accuracy in targetting.

Since then, China tested and got operational DF31AG and DF31B. Obviously able to throw more warheads than the DF31A. The DF31s are solid fuel and can fire within 3 to 5 minutes.

The Dong Feng 41 (CSS-X-10) is a road- and rail-mobile intercontinental ballistic missile (ICBM). The DF-41 completed all testing stages and deployed in the People’s Republic of China (PRC) since 2017. It is estimated to have an operational range of 12,000 to 15,000 km, which would make it the longest range missile in operation. It will likely have a top speed of Mach 25 and will be capable of delivering up to 10 MIRVed warheads. Throw weight of DF-41 is 2,500 kg.

The DF-41 is a three-stage solid-fueled intercontinental ballistic missile reported to have a maximum range of up to 15,000 kilometers (more than 9320 miles) and a top speed of Mach 25 (19,030 mph). It is said to be capable of carrying up to 10 multiple independently targetable reentry vehicle (MIRVs). Its launch preparation time is estimated to be between 3 to 5 minutes.

This would make the DF-41 the world's longest range missile, surpassing the range of the US
Please, Log in or Register to view URLs content!
which has a reported range of 13,000 km. Throw weight of LGM-30 is only 1000kg or just 3 numbers of 170kton nukes. USA UGM-133 Trident II throw weight is only 2,800 kg. 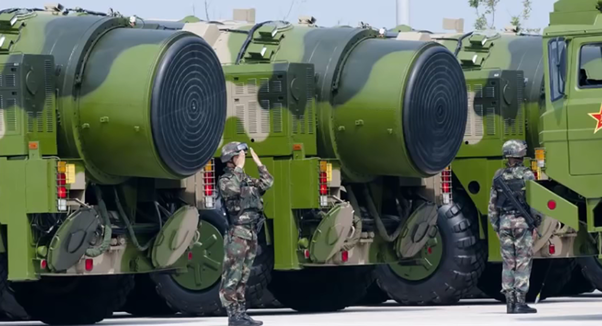 If China got only 260 thermonukes like what everyone is saying and hoping, the surplus warheads will be delivering dim sum and tea bags and cleaned pressed laundry from Chinese laundrymen.

Please remember DF-41 got a very big brother coming up as well in case you think DF-41 not worthy enough to deliver dim sum and tea bags and cleaned laundry.
Russia’s RS-28 “Sarmat” ten-ton payload, rated as the most dangerous ICBM . Reportedly it may carry up to fifteen 350 kiloton warheads, or up to twenty-four of the new “Avangard” nuclear-armed Hypersonic Glide Vehicle (HGV) warheads. Sarmat will be dwarfed by Chinese new missile with even larger twenty-ton payload. That will be solid-fuel space-launch vehicle (SLV), and could form the basis for what might become the world’s largest “mobile” ICBM.

Currently 6 of type 094 but projected to be 8 in years to come.
Carrying 12 numbers of JL-2, mirving 3–4 thermonuclear warheads.
Or 288 nuclear warheads

Type 096 Tang Class SSBN
This is similar to Ohio Class


Carrying 24 JL-3 missiles , each mirving 5–7 warheads.
Currently, 6 numbers of 096 SSBNs are being build simultaneously.
Using 6x24x5, we have 720 thermonuclear warheads.

Or at least 1000 nukes can be delivered by China.
Or the warheads delivered are empty. Or used to deliver dim sums, General Tso chicken, wulung tea bags and cleaned laundry by Chink laundrymen, express delivery.

If China is ever turned into a nuclear wasteland, those that send nukes into China will be nuked into glowing and molten multicolored wasteland.

China promised never to use the first nuke. But if just one nuke land on China or her forces, ALL THE USA BASES FROM EUROPE, DIEGO GARCIA , SINGAPORE . JAPAN AND USA HERSELF WILL BE SEAS AND LAKES OF MOLTEN MULTI COLOR GLASS.
None of the USA carriers will be spared. The carriers will be taken out with nukes even if the carriers hide in Frisco Bay or in the Atlantic Ocean or any other ocean.

And as demonstrated so clearly in KSA a few days ago, the Aegis and Patriot systems defending Saudi a joke as the Aegis and Patriot cannot even detect a few sub Mach cruise missiles not to talk of taking them down. Even to now, no one sure where those came from and who flown them. Despite overlapping coverage of those Patriot and Aegis systems. 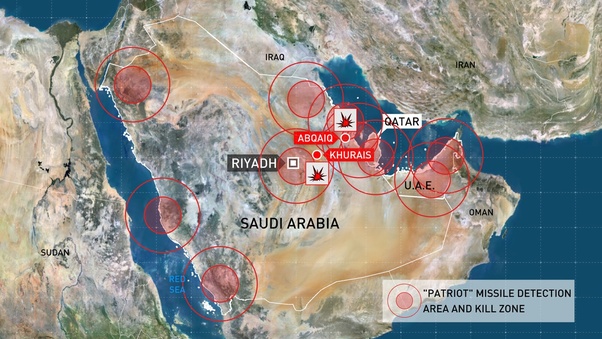 How will the Patriot systems in USA defend against ICBMs coming in at speed of Mach 25 when they cannot even detect missiles at sub Mach or even know where the missiles came from despite overlapping coverage?

So please let peace prevail and it is irrelevant whether you think China only got 260 nukes
The lucky ones will be those that die in the first micro second.
Those still alive a year later will wish they gone at the very beginning.

And why the war fought or even started, no one will give a flying fuck as to the reasons. 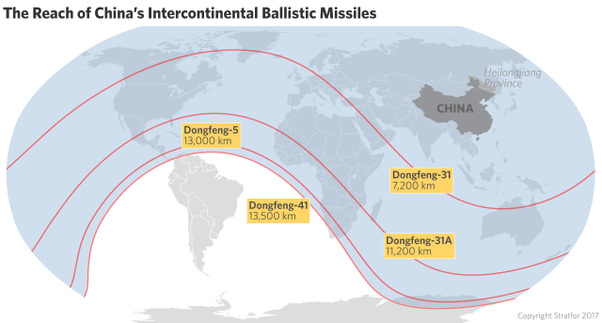 Even so, China never ever threatened to use nukes. Other than if nuke used on China, China will retaliate and use nukes as well.

So please be peaceful and respectful and more courtesy, and no more phony FONOPs and playing games of who will blink with China with phony FONOPs. Do not play with fire regarding Taiwan. AND DO NOT THREATEN TO NUKE CHINA.
B

As far I know none in here has capality launch nukes at China so i'm not sure what is meaning of this parr? Ubernationalist blowhardism on full display.

So please be peaceful and respectful and more courtesy, and no more phony FONOPs and playing games of who will blink with China with phony FONOPs. Do not play with fire regarding Taiwan. AND DO NOT THREATEN TO NUKE CHINA.
Click to expand...

I wonder if the Chinese thermonuclear bomb done to the Yu-Min configuration got anything to do with the different yield as against USA thermonukes done to Ulam Teller configuration.
.
And that apparently the Yu-Min required a lot less maintenance than that of the Ulam Teller.

I tried but cannot find anything on the Yu-Min, unlike the ton of literature on the Ulam Teller.
Perhaps some folks here might guide me to Yu-Min configuration
B

If we assume that picture is true then there are multiple options.

why df-5 and in general all the chinese liquid propellant rockets has that strange "open" "grid" interstage? Very ugly to see.
Last edited: Oct 24, 2019
J

Broccoli said:
W87 what weights around 250kg while having yield up to 500kt
Click to expand...

I thought the heavier W87-1 (newer model) has a yield of up to 475 kilotons (close enough to 500 kilotons), like the W88? Still, that is still distance away from DF-41 250 kg warhead's 650 kilotons. Anyway 100 kilotons would be enough to level a city in modern nuclear war.
You must log in or register to reply here.