Anybody want an old French CV???

VIP Professional
Hey anybody want a CV?? It's got two steam catapults! This news maybe some what dated but still intresting.

What a mess..the former French CV Clemenceau has been ordered back to France by French President Chirac after pressure from enviromental concerns. The CV was sold to India to be scrapped. the ship was under tow to India when ordered back.

Question is..Why did not France sell this ship? They sold the Foch. What happened? It would have made a perfect firts Cv for the PLAN if the arms embargo was lifted...Comments anyone???

PARIS - President Jacques Chirac on Wednesday ordered home an asbestos-laden warship after Indian authorities blocked its journey to an Indian scrapyard, days before a visit to New Delhi overshadowed by the legal wrangle.

Chirac ordered the retired aircraft carrier Clemenceau back to France pending a final decision on how to dispose of the 27,000-tonne ship.
He demanded a fresh audit of the amount of deadly asbestos on board, after a 30-tonne discrepancy emerged between the amount of asbestos said to have been taken off the Clemenceau and the amount weighed by disposal teams.

"The president has decided to put this ship in French waters, on a position of standby which offers all security guarantees, until a definitive solution for its dismantling is found," Chirac's Elysee Palace said in a statement.

India's top court has already banned the Clemenceau from entering the country's territorial waters, pending a final decision on whether the asbestos represents a health hazard to Indian scrapyard workers.

French Defence Minister Michele Alliot-Marie said the Clemenceau would return to France via the Cape of Good Hope and the passage would take about three months. It has been in a waiting zone off India's territorial waters since mid-January.

The ship's outward passage was delayed when Egypt sought assurances that it did not pose an environmental threat before allowing it to pass through the Suez Canal.

"Regarding the cost of the return, that will be taken on by the state and should be around 1 million euros," Alliot-Marie told a news conference broadcast on national television, adding that the ship would head to the port of Brest in western France.

The costly decision to bring back the Clemenceau gave ammunition to France's opposition parties to attack the conservative government, which is pursuing a cost-cutting budgetary policy to tackle the state's mounting debts.

"This decision should have been taken several weeks ago," Socialist leader Francois Hollande said in a statement, demanding an inquiry into the matter. "This affair of state seriously tarnishes the image of France and of the president".

Rudy Salles, a deputy with the centrist Union of French Democracy party, criticised the government for "an unacceptable loss of time, prestige and money".

Once the pride of the French navy but now dubbed the "Farcical Flagship" by critics, the Clemenceau affair has cast a shadow over Chirac's trip to India on Sunday.

The French leader will be accompanied by a host of top business executives during the trip, determined to press French claims to lucrative contracts for Airbus passenger jets, military hardware and possibly civilian nuclear know-how.

Relations between France and India have been strained in recent weeks by Paris's resistance to a bid by Mittal Steel, owned by Indian-born billionaire Lakshmi Mittal, to buy steelmaker Arcelor, which employs 28,500 people in France.

Chirac's decision came after France's top administrative court ruled the Clemenceau's transfer to a breaker's yard in the western Indian state of Gujarat should be suspended.

The Council of State said the ship was "hazardous waste" and so had been exported in breach of international rules.

Environment group Greenpeace, which led the fight to prevent Clemenceau from entering India, welcomed the decision.

"President Chirac's decision shows how governments, when confronted with the truth and pressurised by public opinion, take corrective action," it said in a statement issued from the southern Indian city of Bangalore

It's a floating death trap. There's waaaaaaaaay too much usbestos(or how ever you spell it!) on board that ship. It takes A LOT of money to operate that hold hunk of junk and clean it out.
T

Didn't they mention selling to China back in the mid-ninties? Of course French companies would have to be given tasks of refurbishment, not to say aircraft purchases as well... bad deal if you ask me.

Well, the French actually offered to give china the carrier for free, under the hopes that china would hire french contractors to outfit the ship,provide weapon systems, and aircraft. Anyhow, the abestoes are to remapant on the ship now for it to be sold.
S

VIP Professional
Her sister (formerly the French Foch) the Navio-Aeródromo (Aircraft Carrier) São Paulo, is the flagship of the Brazilian Navy
Please, Log in or Register to view URLs content!
.
May be Brazil is interested to get the Clemenceau fo free to win spare parts.

I also think, chinese naval ingeneers could study the Clemenceau by scrapping - like the old Melbourne - ; it shouldn't be impossible to cut the asbestous parts of the ship by well trained soldiers and using protective masks and cloudings (which all troops at the world will have).

Note: the greenpeace activists entered the Clemenceau without protective masks ....

VIP Professional
Asbestos causes different types of cancer. one of which, Mesothelioma is very rare.

I know the USN & VA has speical test for the affects of asbestos for those that have been exposed to it. I had the test. I was on board two ship riddled with that crap. The Midway and Hancock. both ships constructed during WW 2.

As for the French selling that ship. I think the best bet would be to sell it to Brazil. As mentioned by Sczepan. It would make a geat spare parts ship..if indeed any are less.

The US had grreat difficulty scrapping the ex-USS Coral Sea CV-43. It took 7 years to scrap because of bio-hazzards found and poor prepration by the USN of the Coral Sea for scrapping. In fact the scrapping yard went bankrupt.The page below has many,many pics of the Coral Sea being scrapped. 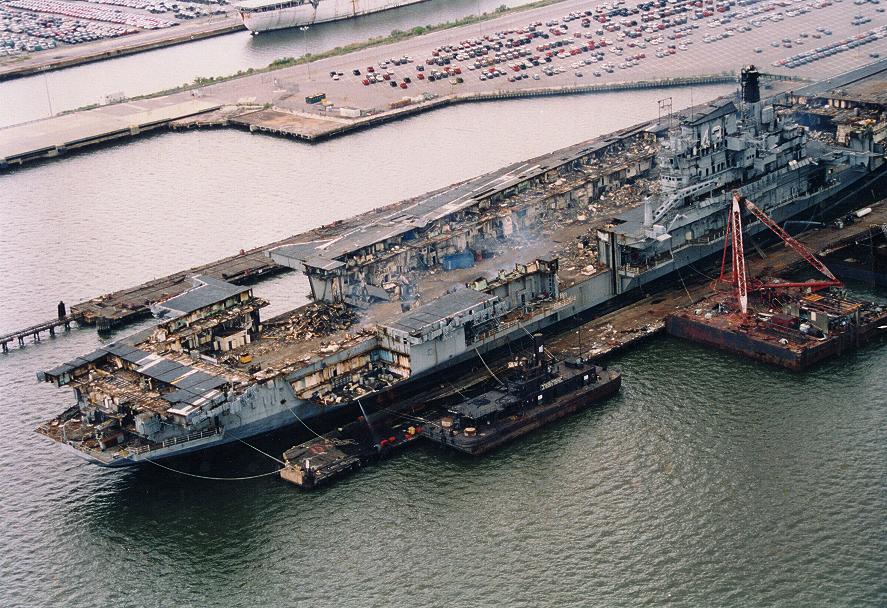 VIP Professional
Well the Clemenceau finally reached Brest France. Here a history of the ship since it's decomissioning.

The French Aircraft Carrier Clemenceau has a long and slightly embarrasing life story.
by Staff Writers
Paris (AFP) May 17, 2006
The French aircraft carrier Clemenceau returned to its northwestern home port of Brest on Wednesday, after failing to find a foreign country willing to dismantle its asbestos-contaminated hull.
Here is a timeline of the embarrassing saga:

1961: The 27,000-tonne Clemenceau enters service as one of the country's two aircraft carriers. It is named after Georges Clemenceau, who led France in the final years of World War I.

Asbestos, an insulating material which was not known at the time to be carcinogenic, is widely used in its construction.

1997: The vessel is decommissioned after 36 years of service, which included action during the Lebanese civil war in the 1980s and the first Gulf War in 1991.

2000: The Clemenceau's sister ship, the Foch, is also decommissioned, then sold to the Brazilian navy, which is still operating it under the name Sao Paolo.

2003: The hull of the Clemenceau is sold to a Spanish company, which undertakes to remove the asbestos within the bounds of the European Union. However France cancels the deal after the buyer begins towing it towards a Turkish shipbreakers' yard.

2004: The navy signs a deal with a French company, Technopure, to strip the asbestos from the hull so the ship can be towed to the giant Alang yard in India, where it is to be broken up for scrap. Technopure claims that only 45 tonnes of asbestos remain in the structure.

2005: French environmental groups and international pressure group Greenpeace file a lawsuit to block the departure of the hull, which they say still contains large amounts of asbestos. At the end of the year, a court rules that the vessel can nevertheless be towed to India, via the Suez Canal.

January 6, 2006: India's Supreme Court rules against allowing the hulk, officially known as "Hull Q790", to be decontaminated in India prior to demolition.

Jan 12: Greenpeace activists board the vessel as it approaches the Suez Canal. The Egyptian authorities initially refuse it passage, relenting on January 22.

Feb 3: Environmental groups publish a study claiming that the hulk still contains between 500 and 1,000 tonnes of asbestos-contaminated material.

Feb 8: The European Commission seeks an explanation from France on the deal to send the vessel to India.

Feb 12: A row breaks out over the amount of asbestos that Technopure removed from the vessel before its departure from the Mediterranean port of Toulon.

The French defence ministry orders a probe after finding it cannot locate 30 tonnes of toxic material which Technopure claimed it had removed.

Feb 13: India's Supreme Court orders a new study into the materials aboard the hull, which remains banned from entering Indian territorial waters.

April 6: The ship rounds the Cape of Good Hope.

May 17: The Clemenceau reaches its home port of Brest in northwestern France. The French authorities, who must now find a solution for its dismantling, have promised it would not remain in Brest beyond 2008
T

I advise to anybody who wants to buy this carrier that is not a great plan, indeed the CV can't operating Rafale Aircraft and we can't speak about the F-18...:rofl:

Seriously, this is the 4th time that France get a bad image... Jeez, the President is still unable to hear...:rofl: ...since 10 years.

Twix101 said:
I advise to anybody who wants to buy this carrier that is not a great plan, indeed the CV can't operating Rafale Aircraft and we can't speak about the F-18...:rofl:

Seriously, this is the 4th time that France get a bad image... Jeez, the President is still unable to hear...:rofl: ...since 10 years.
Click to expand...

I do not know what will happen to the ship. There are no ship breakers in France that are willing to scrap the ship. But Chirac has promised to have the ship out Brest France by 2008. That does not mean it will be disposed of.

The US has trouble getting rid of it's decomissiond ships. The big diffrence is the US is willing to sink it's old ships. But the upcomming problem for the US is they have five out of comission super-carriers that need to be disposed of.

This is how the USN got rid of two Cv's..Very nice pics..hope you have a broadband connection..