VisMod is a portmanteau of VISually MODified. It's used for Training and Film production to use a common availible vehicle to replace a Rare and hard to get one.
Example
Russian BMP2

not easy that easy to get if your the US.
So take a Vehicle the army has that's got some things in common like this M901

And you have a IFV that can be used for training against.
Now Don't think this is just the US or Hollywood or even just ground vehicles

Here are two I did not know about till this morning.

Check out this weapon used in the movie. It's got be modified from an exiting weapon, but never the less looks pretty cool. 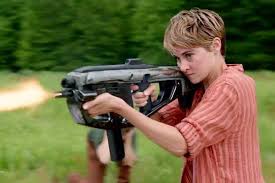 TerraN_EmpirE said:
Style wise it looks like a two barrel weapon. The Forward portion looks to be inspired by the Kriss Vector and if you look at the way the magazine sits it's on the same angle as a high capacity Vector SMG but they seem to have modded it to look like a Assault rifle with a over barrel 25mm grenade launcher.

Equation said:
LOL..I knew it you would know the best answer TE!

Of course they are not the same, but the lines of the design reminds me of the Start Trek Generation series Phaser Rifle.
Click to expand...

It's like the DS9 prop is a Picasso rendition yet it predates the Vector by almost a decade.
Click to expand...

Staff member
Super Moderator
This is not really Breaking Military News per sey.

It's more visual and should probably be in the Military Pictures Thread.

Thanks Jeff I was trying to figure out where to put this Guess I guessed wrong.

TerraN_EmpirE said:
Thanks Jeff I was trying to figure out where to put this Guess I guessed wrong.
Click to expand...

No probs...not a bad guess in any event. It just has a better chance here of staying up on the active 1st page of the forum.

M1 Abrams right? Wrong. these shots were from Courage under Fire.
This one is from Godzilla 2014

do you see it?
No?
Count the Road wheels. Abrams has 7 these have 6. So what are they? British made Chieftains.
the Production of Courage under fire ran into a problem. The Army did not like the Script and pulled out of assisting in the making of the film. So the Producers and director came up with a plan. They bought form the Australian Government a number of Retiring Chieftain MBT's
and then heavily modified them.

These tanks are rented for every thing from B movies to top budget block busters from a supplyer called
Please, Log in or Register to view URLs content!

FORBIN said:
According to some sources, the evasive MH-X may have taken part in the raid that killed Islamic State member Abu Sayyaf.

In the night between May 15 and 16, U.S. Special Operations forces killed ISIS high level operative Abu Sayyaf, in a daring raid that took place in eastern Syria.
Little is known about the raid.

According to the CNN, the operation was conducted by U.S. Army’s Delta Force, which was carried to a residential building in Deir Ezzor, to the southeasth of Raqqa, by Army Blackhawk helicopters and Air Force CV-22 Osprey tilt-rotor aircraft.

It’s pretty obvious many other assets were actually involved in the raid, including support assets providing electronic support to the intruding choppers and drones, as happened during
Please, Log in or Register to view URLs content!
.

The presence of some Air Force Special Operations Command Ospreys during a raid against ISIS is not a first.

What could really be a “first” is the possible involvement of the Stealth Black Hawk helicopter exposed by the raid in Abbottabad, Pakistan, back in 2011.
For the moment it’s just a hypothesis, but
Please, Log in or Register to view URLs content!
that the Delta Force team were transported deep into ISIS-held territory “via presumably stealth equipped Black Hawk helicopters” of the 160th Special Operations Aviation Regiment (Airborne) “Night Stalkers”.

160th SOAR’s Black Hawk helicopters presence in the region was first unveiled after an unspecified variant belonging to the U.S. Army took part in an unsuccessful raid to free captured American journalist James Foley and other captives from ISIS in eastern Syria
Please, Log in or Register to view URLs content!
.

timely as one of the Youtube channels I watch happens to have..footage of the ZD30 Film Prop versions of the Stealthhawk
Now the movie versions of the twin Stealth choppers a combination of practical props that could be used as sets, swung from cranes and blown to smithereens as well as CGI. There sequence was added in a re-shoot as Bigillow had to change the ending on the film. There shaping was based heavily on that of the F117 NightHawk and the H60 series helicopters.
You must log in or register to reply here.