Jura said:
not mentioned by

So?
The ship has not even been launched let alone handed over and equipped.
What is XSSM anyways? Endeavor Robotics, a world’s leading provider of unmanned ground vehicles (UGVs), announced that it has formally teamed with Howe and Howe Technologies, of Waterboro (Maine) to bring a new unmanned version of Ripsaw vehicle to the U.S. Army’s Robotic Combat Vehicle (RCV) Program.

The U.S. Army formally announced its plan to conduct a missile defense radar “sense-off” to replace the aging Patriot that will be included in its Integrated Air and Missile Defense system (IAMD) under development.

The purpose of this sense-off seems to be designed to hit the reset button on the Lower Tier Air and-Missile Defense Sensor (LTAMDS) program that has struggled to bring about a new radar for well over a decade.

But will this effort right the ship for the program, or send it further off course?

The Raytheon-made Patriot air and missile defense radar was first fielded in the 1980s, and the Army attempted to replace the system with Lockheed Martin’s Medium Extended Air Defense System, or MEADS, through an international co-development effort with Germany and Italy. But that program was canceled in the U.S. after closing out a proof-of-concept phase roughly six years ago.

Since then, the Army has studied and debated how to replace the Patriot radar with one that has 360-degree detection capability, while Raytheon continues to upgrade its radar to keep pace with current threats. It is acknowledged that there will come a point where that radar will not be able to go up against future threats.

Taking years to decide, the service finally moved forward on a competition to replace the radar last year and chose four companies to come up with design concepts for the capability — Raytheon, Lockheed Martin, Northrop Grumman and Technovative Applications.

Earlier this month, Raytheon and Lockheed were chosen to continue technology development under that program.

The Russians had been complaining already that the Ashore Aegis was already a violation of INF.
INF bans ground based intermediate range missiles not air or sea based. As such the nuclear tipped Tomahawk cruise missiles of the Navy were not effected by it. When Aegis Ashore was created it took most of the Naval Aegis including fire control and VLS and put it in the ground. The Aegis naval version launches Tomahawk cruise missiles all the time. The Russians claimed that the Aegis Ashore was created with this full capacity ergo a violation of the treaty. The U.S. line has been that it would never be used that way and that it was not get the patch for such.

so let's wait and see

SamuraiBlue said:
The ship has not even been launched let alone handed over and equipped.
What is XSSM anyways?
Click to expand...

I guess it will be this XSSM

Well i don't know whether they have vls but are these considered vls? The Japanese Navy has tested a supersonic anti-ship missile XSSM
Please, Log in or Register to view URLs content!

Jura said:
... I'm telling you the LCS Program is botched

The Navy is still committed to resuming rotational deployments of the Littoral Combat Ship to Southeast Asia, Chief of Naval Operations Adm. John Richardson said, though he declined to specify when the deployments would resume.

Speaking to reporters in the Asia Pacific region, Richardson told USNI News he did not want to get into specifics of future deployment dates.

“I can tell you that that the United States Navy is committed to the rotational deployment of the Littoral Combat Ship to Singapore in Southeast Asia. We look forward to using this to engage with our allies and partners, to continue to advocate for freedom of navigation as we have done with the Littoral Combat Ships and other classes,” he said.

The Navy is now focused on ensuring that the follow-on deployments of the LCS incorporate the lessons learned from earlier deployments, he said.

The U.S. and Singapore had agreed in 2011 to rotational deployments of up to four Littoral Combat Ships to Singapore. It was envisaged that by 2018 up to four Littoral Combat Ships would be operating from there; however, issues with the LCS program have led to only three single-ship deployments being carried out so far in the program’s history. The Navy planned for two LCSs to be deployed in Singapore in 2018, but a readjustment of the LCS program
Please, Log in or Register to view URLs content!
.

Richardson also stressed the need for nations operating in Pacific
Please, Log in or Register to view URLs content!
and avoid miscalculations and escalations. While encounters between the U.S. Navy and Chinese People’s Liberation Army Navy (PLAN) in the region have largely been professionally conducted according to CUES, the recent encounter between USS Decatur (DDG-73) and a PLAN destroyer marked a departure from these safety practices.

“We would certainly advocate for a return to the consistent adherence to the agreed-to code that would minimize the chance for a miscalculation that would possibly lead to a local incident and potential escalation, and so what we want to do is avoid those type of scenarios, stick to the code and maintain safe and professional behavior,” he said.

Richardson stressed that the carrying out of Freedom of Navigation operations were part of a broader scope of contesting excessive maritime claims around the world – and not solely limited to the South China Sea – and that the Navy would continue to conduct such operations in conjunction with its allies and partners globally. On the recent passage of guided-missile destroyer USS Curtis Wilbur (DDG-54) and guided-missile cruiser USS Antietam (CG-54) through the Taiwan Strait, Richardson said the mission was meant to demonstrate free and open navigation in international waters and was executed in a safe and professional manner by all parties involved.

Richardson was in Australia as part of a regional tour that also included visits to the Philippines and Indonesia. He is scheduled to visit New Zealand next on his tour.
Click to expand...

Jura said:
Congressman to Mattis: Prepare for ‘a lean future’ as national debt continues to rise
oh does it
source is DefenseNews
Please, Log in or Register to view URLs content!
Click to expand...

people don't read what I post
Bolton: National debt ‘threat to the society,’ forcing DoD spending to ‘flatten out’
Please, Log in or Register to view URLs content!

Bolton, speaking at the Alexander Hamilton Institute on Wednesday, said he expects significant cuts to discretionary spending, but not entitlements such as Medicare and Social Security. The comments came as the country’s deficit rose to $779 billion, its highest level in six years, fueled by revenue-sapping tax cuts.

“It is a fact that when your national debt gets to the level that ours is, that it constitutes an existential threat to the society,” Bolton said. “And that kind of threat ultimately has a national security consequence for it.”

While Congress will have the final say, Bolton also affirmed the White House Office of Management and Budget is planning 5 percent cuts across all government agencies for its fiscal 2020 budget proposal expected in February. That plan, which Trump disclosed at a
Please, Log in or Register to view URLs content!
on Oct. 17, has prompted “howls of outrage … from various parts of the government,” Bolton said.


Please, Log in or Register to view URLs content!
makes up more than 60 percent of total federal spending, and is expected to continue to rise, in part due to America’s aging population.

“The entitlements come in few years and that problem will have to be addressed, but right now you can have significant impact on both the deficit and national debt by cutting government spending on discretionary programs,” Bolton said.

To presebt the White House with alternatives, the Pentagon plans to continue preparing a $733 billion budget, in line with previous plans for fiscal 2020.

"We are not going backwards,” Thornberry said.

Bolton sought to downplay the impact of the proposed cut to the Defense Department, highlighting the internal savings available through “procurement reform and finding ways to reduce costs across a wide variety of areas.

“So while the budget may not be in an upward curve, the effect of spending the money will increase,” he said.

According to the U.S. Treasury, the deficit rose by $113 billion over the previous year as government spending outpaced revenues. Receipts were generally flat in FY18, while spending increased 3.2 percent as Congress gave more funds for military and domestic programs.

Revenues generally tumbled after December when Trump signed into law $1.5 trillion of tax cuts over the next decade. The tax cuts have caused economic growth to accelerate this year, with Federal Reserve officials anticipating gains of 3.1 percent. But the Trump administration initially promised that the tax cuts would pay for themselves through stronger growth — and there is no sign so far of that happening.
Click to expand...


oh and for the SDF record, I posted
Jul 19, 2018
the USN may cancel FFG(X),
before the first indication appeared inside
Please, Log in or Register to view URLs content!
Click to expand...

Please, Log in or Register to view URLs content!
Here’s when all of America’s new nuclear warhead designs will be active — and how much they’ll cost
big bucks 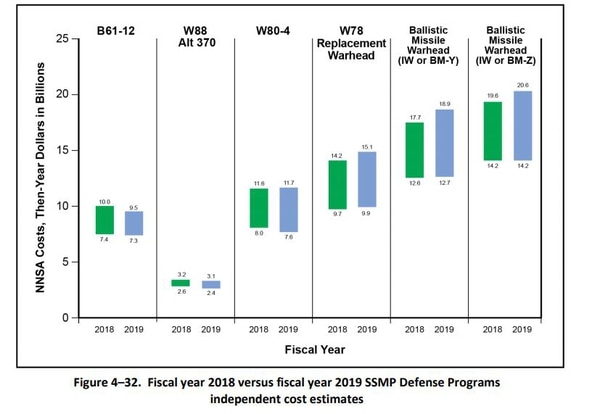