related (but mostly talking the Spirit):
B-21 Development Applying Tough Lessons From B-2
Please, Log in or Register to view URLs content!

The U.S. Air Force is taking lessons learned from the plagued B-2 Spirit bomber development program and applying them to the next-generation B-21 Raider.

While it is unknown when the B-2 will retire, the aging stealth bomber may end up flying alongside the B-21.

The B-2 bomber flew its inaugural flight 30 years ago from the Plant 42 runway here. Today, the
Please, Log in or Register to view URLs content!
site is preparing for development of the Raider and two newly erected beige buildings have popped up, likely tied to the next-generation bomber.

Although technical and acquisition problems inundated B-2 development, the classified B-21 is taking a different approach. Many details remain classified, but the company and service officials acknowledge the team is being run by the Rapid Capabilities Office instead of a traditional program office.

B-21 development appears to be progressing; the Air Force’s No. 2 officer—Air Force Vice Chief of Staff Gen. Stephen Wilson—has said first flight is slated for December 2021. But House Armed Services seapower and projection forces subcommittee Ranking Member Rep. Rob Wittman (R-Va.) alerted the public last year that there was a problem with the inlet design for the B-21’s Pratt & Whitney-manufactured engines. Wittman says those issues were fully addressed and the program has made tremendous progress.

“I’ve been pretty impressed by what both the Air Force and what Northrop Grumman have done in addressing these particular issues and I think we’re on the right course,” he says. “Getting those things right to begin with and setting the tone and path I think is critically important.”

An Air Force illustration issued in 2016 of the B-21 design suggests it may closely resemble the B-2. “The B-2 will be setting the path course for the B-21,” says Janis Pamiljans, aerospace systems sector president at Northrop Grumman. “What we’ve learned on B-2 are finding themselves baselined in the design for B-21 for supportability, sustainability, [and] mission capable rate.”

The aging B-2s must be overhauled every nine years and are taken off the flight line for up to 12 months. Maintenance includes modifications and upgrades to antenna technology, avionics and software systems, costing U.S. taxpayers an average of $60 million for each aircraft, says Richard Sullivan, vice president and B-2 program manager at Northrop Grumman.

Separately, the Air Force is funding the $3 billion B-2 Defensive Management System Modernization (DMS-M) program to enhance the aircraft’s direct attack capability and upgrade its integrated air defense systems. The current DMS was designed in the 1980s and has not received any upgrades.

“By leveraging ‘state-of-the-art’ electronic warfare antennae, processors, controller and displays, B-2 aircrews will realize unprecedented situational battlespace awareness and dynamic, real-time threat avoidance in the most complex radio frequency emitter environments,” the Air Force says. “The inherent increased sensitivity of the modernized DMS over the legacy system, with increased processing power, will build a battlespace picture that could be shared with joint force platforms by onboard communication systems.”

DMS-M is facing a possible eight-month delay as the service works with Northrop Grumman to implement an agile software development framework, Air Force acquisition executive Will Roper told lawmakers in March. Engineering and manufacturing development for the effort goes through July 2022, according to fiscal 2020 budget documents.

Lawmakers acknowledge it is important that the nation’s only operational stealth bomber remain relevant. But the House Armed Services Committee is concerned about DMS-M schedule delays, according to a report accompanying the lower chamber’s mark of the fiscal 2020 defense policy bill.

“Unless the B-2 DMS-M program makes significant changes, there may continue to be delays that will impact the success of the program,” the report says. The committee directs the Air Force to brief members on sufficient government software development expertise; contract definitization schedule; delivery schedule; determination of software baseline; and an assessment of related DMS-M-related program support.

The Senate Armed Services Committee also is asking for answers regarding the U.S. bomber force. The upper chamber is requesting a brief on an updated bomber road map and plans for B-2 life cycle sustainment, among other items, according to a report accompanying the Senate’s mark of the fiscal 2020 defense authorization bill. The upper chamber also would require details on Raider basing.

To date, the service has been “real[ly] happy with the way Northrop has approached” the B-21 program, says Maj. Gen. James Dawkins, Eighth Air Force commander and overseer of the Joint-Global Strike Operations Center. The next-generation bomber completed a successful critical design review in December.

“Everything I hear is that cost, schedule and performance is right on expectations,” Dawkins says.
Click to expand...

OK OK no "tinkering", LOL
"USAF hopes to keep the production timeline on track by not tinkering with the jet’s main performance requirements—such as altitude and range—although the design can adapt to new technologies as they become available, Walden said."
inside B-21 Taking Shape, Though RCO Hedges on First Flight Date
10/24/2019
Please, Log in or Register to view URLs content!

Jura said:
OK OK no "tinkering", LOL
"USAF hopes to keep the production timeline on track by not tinkering with the jet’s main performance requirements—such as altitude and range—although the design can adapt to new technologies as they become available, Walden said."
inside B-21 Taking Shape, Though RCO Hedges on First Flight Date
10/24/2019
Please, Log in or Register to view URLs content!
Click to expand... 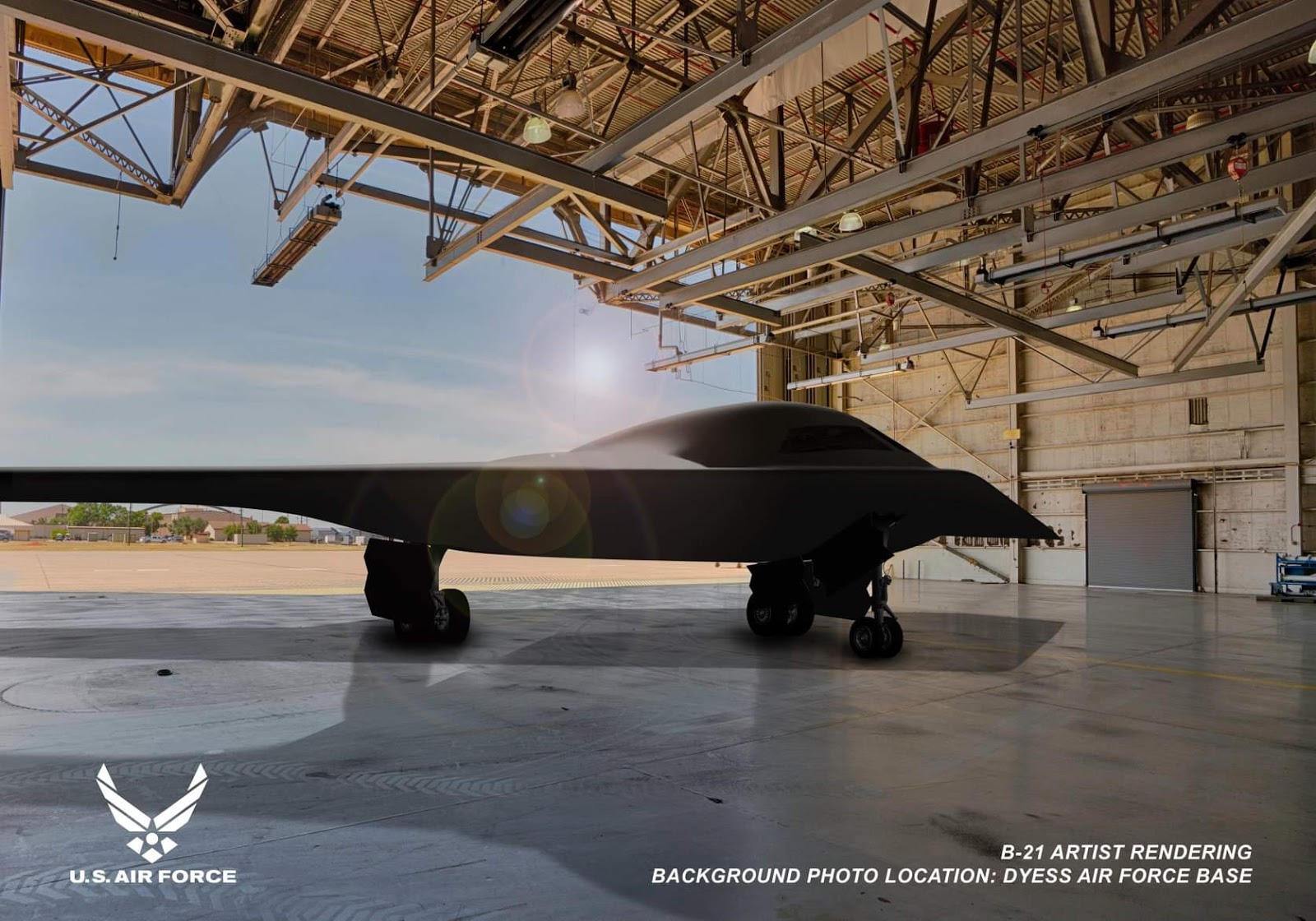 That's the official rendering. Interesting details there. Esp the inlets.
B

That's the official rendering. Interesting details there. Esp the inlets.
Click to expand...

Registered Member
What is the reason that B21 is being considered smaller than the B2?

If the engine is based off F135 like F118 off the F110, then dry thrust is likely to be close to 15 tons *2 which would put the power on tap equal to the B2.
You must log in or register to reply here.