Registered Member
Based on these canisters, do you think DF-100 can fit within U-VLS?

by78 said:
Two recent images from Jiangnan shipyard + a magazine scan. All images are high-resolution. 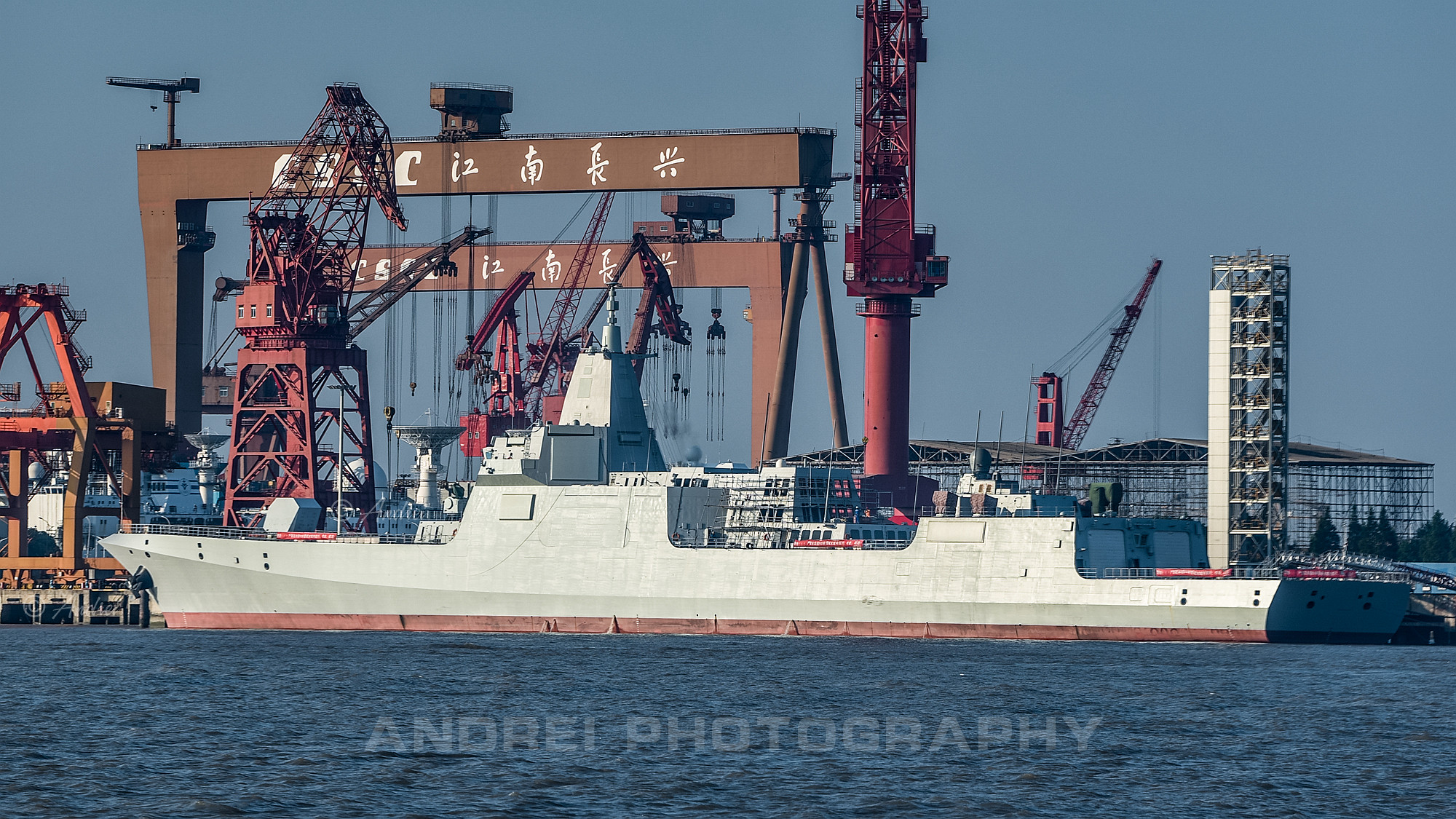 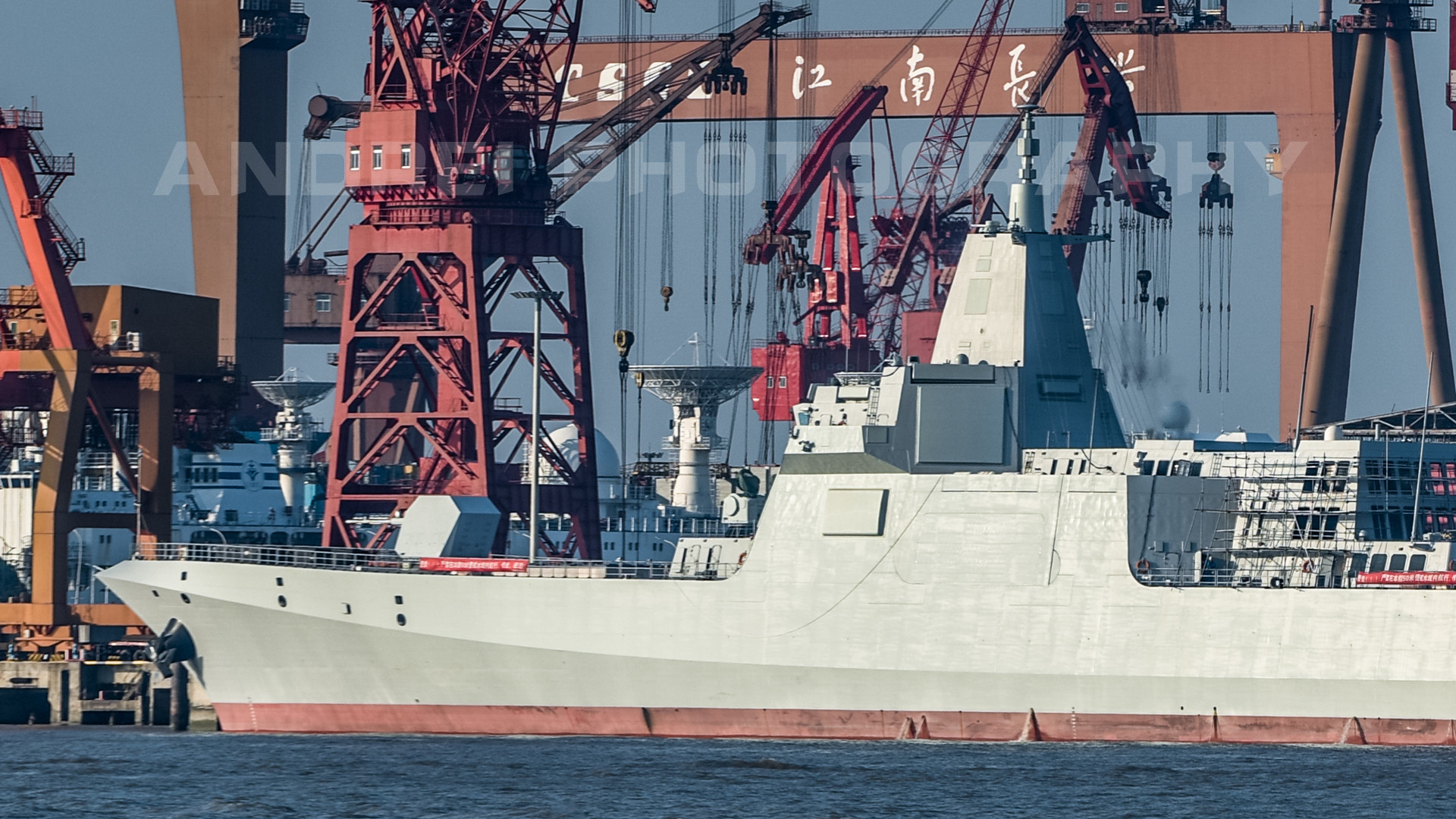 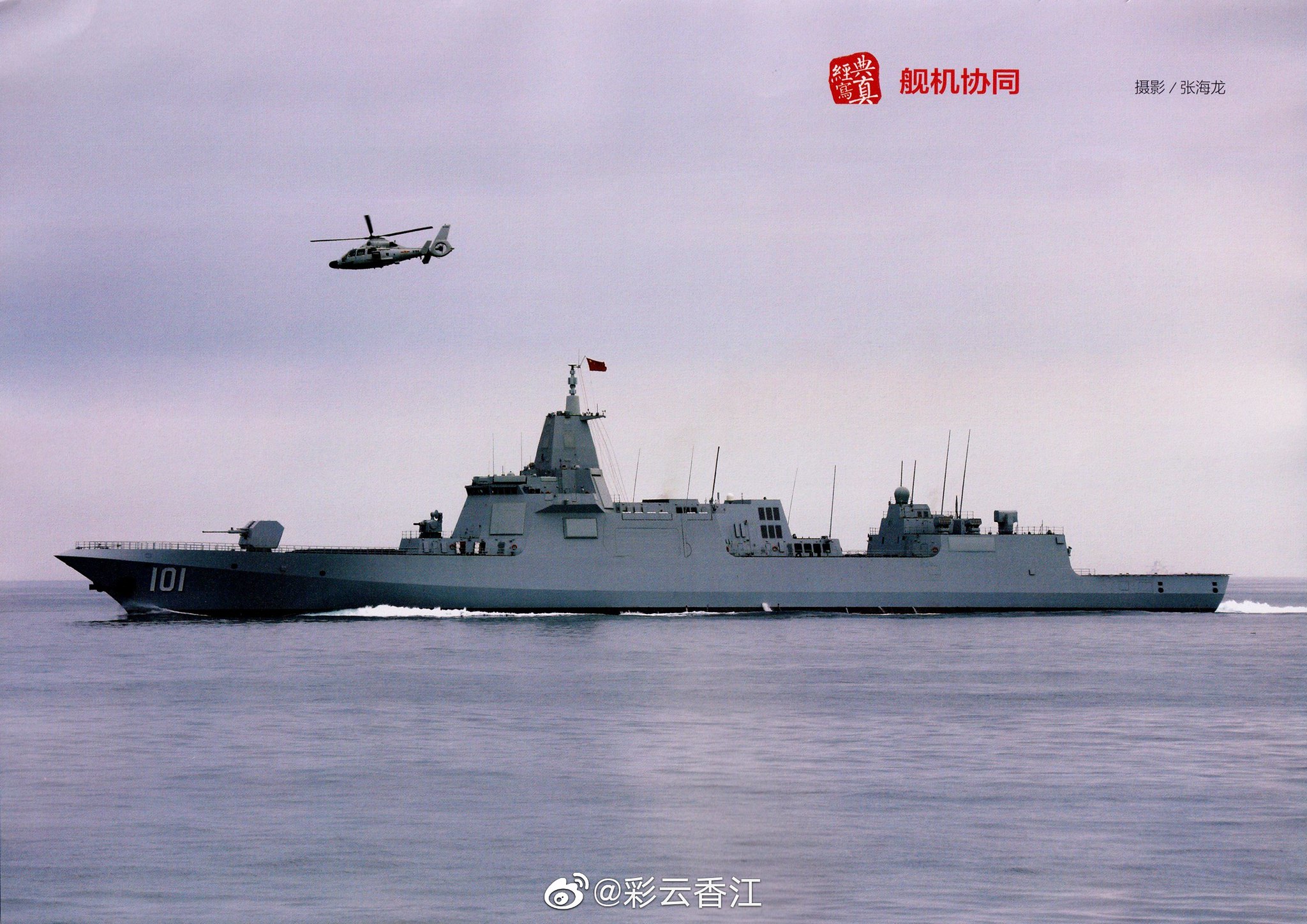 The radars on the Yuanwang 8 ship appears like they are growing out of the 055.
B

Tam said:
Based on these canisters, do you think DF-100 can fit within U-VLS?

Hell no.. Too big. Or maybe the canisters are intentionally made larger to hide the true size of the missile.
Last edited: Sep 14, 2020

Temstar said:
Since we're talking about the VLS a lot I figure I'll post this, not sure if it's posted before in this thread:

So options currently for Type-055 VLS:

I thought there's a YJ18 version that's LACM that's also compatible for 055 but I could be wrong. The fact that concentric canister launch supports both hot and cold launch is amazing.
Click to expand...

Just for the record so that everyone is aware, that is a non-official, fan made CGI, from a few years ago now.

The different depicted certainly are not confirmed (nor necessarily even logical) loadouts for the ship.

last year’s National Day military parade can be said to impress everyone. my country’s current top long-range strike weapons can be said to have appeared one by one, and even include the Dongfeng 17 hypersonic missile and the famous Dongfeng 21D and Dongfeng 26 Wait for anti-ship ballistic missiles.
But in fact, compared to Dongfeng 17, there is a missile that has been very low-key since its appearance, and it is rarely seen on the spot. But in fact, this missile is also one of my country's killer features, which is the Dongfeng 100 supersonic. cruise missile. So, what is unique about this missile?
Today, Brother Tiger will talk about this unusually low-key weaponry.

I believe many people have noticed that the full name of Dongfeng 100 is very special, and it is called a supersonic cruise missile. In the missile industry, these two terms are generally seldom combined. Take cruise missiles as an example. The general pursuit is hit accuracy and range. In this regard, the Tomahawk cruise missile of the US military and the Longsword 10 of our country are typical. When attacking ground targets, its range often exceeds thousands of kilometers. After the replacement of nuclear warheads, because the warhead is lighter and smaller, it can fill up more fuel, and its range has reached a terrifying 2500 kilometers. Sword 10 is similar. In terms of hitting accuracy, the Tomahawk cruise missile can reach the 5-meter level when GPS+ terrain matching guidance is used, and it can directly attack the enemy’s key facilities, such as the command center or reinforced aircraft. The only shortcoming of cruise missiles That is, the mobility is relatively poor and the speed is relatively slow. Take the Tomahawk as an example, its flying speed is only about 0.9 Mach, and it can easily be intercepted by ground air defense systems. For example, my country still retains a large number of antiaircraft artillery units, which are actually used to intercept incoming cruises. Missile.

On the Syrian battlefield, the US military once dropped more than 100 Tomahawk cruise missiles at one time, but they were intercepted by the Russian-made air defense system equipped in Syria. Cruise missiles such as the Tomahawk, the 10 common in my country, and the Russian caliber are a problem in actual combat. It is okay to bully a small country, but it is not enough to deal with a large country with a complete air defense system.

But Dongfeng 100 is different. This missile is also a cruise missile. It has a long range and can reach more than 1200 kilometers, but its most outstanding performance is speed. It is understood that due to the use of a new composite power unit, This allows the missile to fly at a speed of Mach 3 to 4 throughout the entire process, and it can also perform complex maneuvers at the end to increase the probability of penetration.

This is not the end, it is inseparable from the flying height that can achieve such a fast flight speed. In order to improve the penetration rate of traditional cruise missiles such as Tomahawk, it often relies on terrain matching until it adopts ultra-low-altitude flight, but it is still not difficult to intercept at the end, while Dongfeng 100 is different. Its flying height is very delicate. It happens to be located in a nearby space of 30 to 60 kilometers, which is the same as the flying height of my country's Dongfeng 17 hypersonic missile warhead. The missile at this height is very difficult to intercept. Why?

This is mainly because, ah, the current air defense system actually has a large neutral position. For example, conventional long-range air defense missiles, the maximum shooting height is often difficult to exceed 30 kilometers, and the general anti-missile interceptor, The lower limit of its shooting height is very high, often above 100 kilometers, and the middle part of the height belongs to the adjacent space. At present, only the THAAD system of the United States can intercept this high-level anti-missile system. The reason why

is very difficult to intercept is mainly due to the seeker of the anti-missile system. Since the seeker of the anti-missile interceptor outside the atmosphere does not need to consider the heating problem of the warhead at high speed, all infrared seekers are used. However, ordinary air defense systems cannot intercept high-speed targets due to the limited shooting height. In the adjacent space, there are both high speed and high temperature caused by friction, which will cause the infrared seeker to fail, so it cannot be intercepted.

Although the THAAD system's interceptor missiles can work in adjacent spaces by placing the infrared seeker on the side of the warhead to avoid high temperature areas, they have poor maneuverability and can only strike ballistic missiles, and cannot intercept DF100 at all. This kind of maneuvering target. And this is only part of the performance characteristics of Dongfeng 100. As a multi-purpose cruise missile, it can not only attack land targets, but also attack ships at sea.Fight. Since the Dongfeng 100 cruise missile itself is launched vertically, it does not rule out the possibility of boarding warships in the future.
For example, my country’s 055 destroyer has a huge vertical launch system that allows Dongfeng 100 to be directly inserted without modification. , By then, the 055 destroyer will be able to achieve precision strikes against targets at sea and land 1,000 kilometers away.
Click to expand...

You should please treat some of the articles and translations you post on SDF with more caution.

You are new here, so I will let it go for now, but your recent contributions to SDF posting a variety of articles of dubious credibility and often seemingly being machine translated websites, is not consistent with the accessibility and quality of articles that we entertain here.

If you really want to post an article here, you can approach it by asking if an article's premise or credibility is sound -- but cold-posting an article of dubious credibility without any commentary or your own input or analysis is not very constructive and it leaves other people to pick up the pieces and make any corrections and point out obvious flaws. 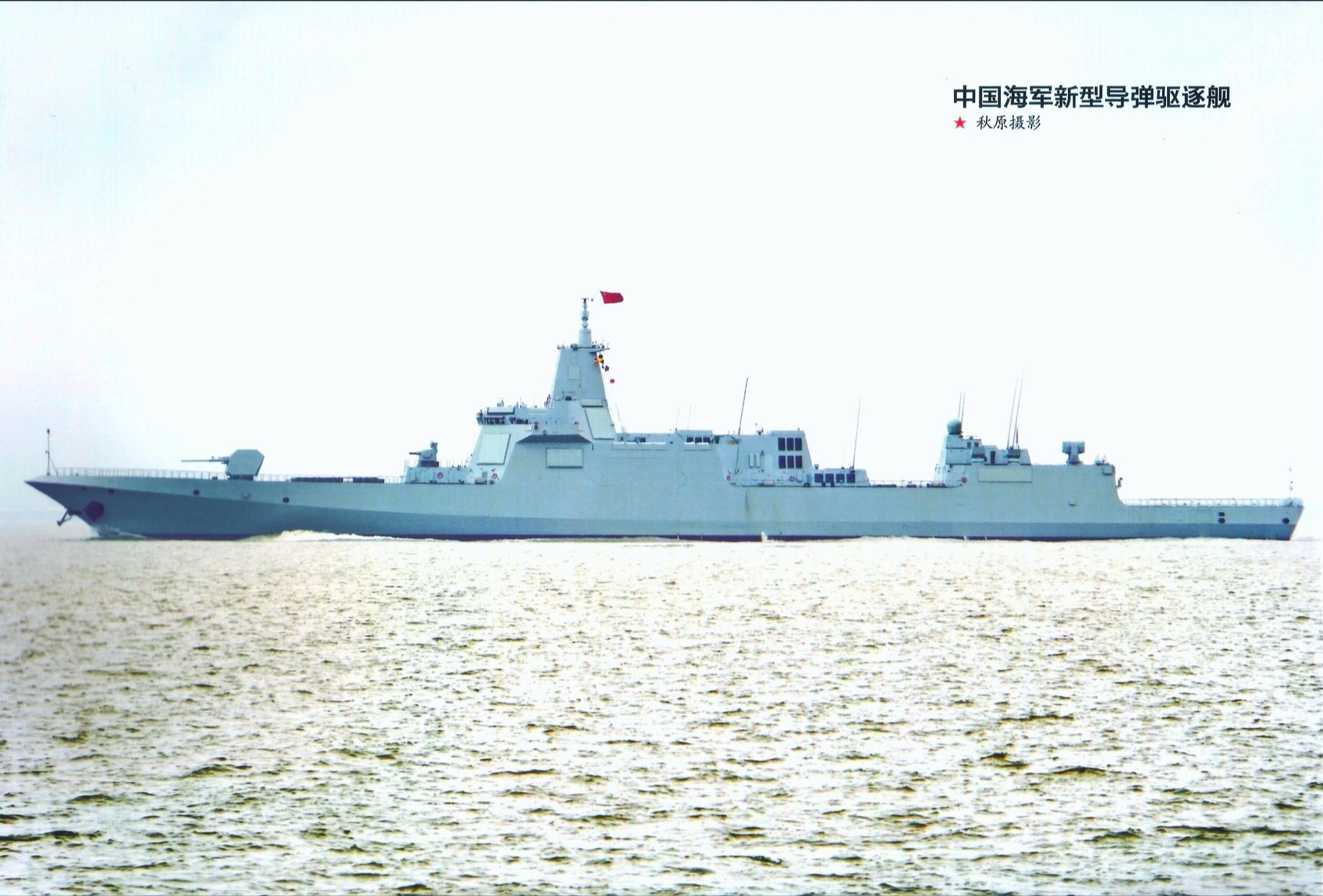 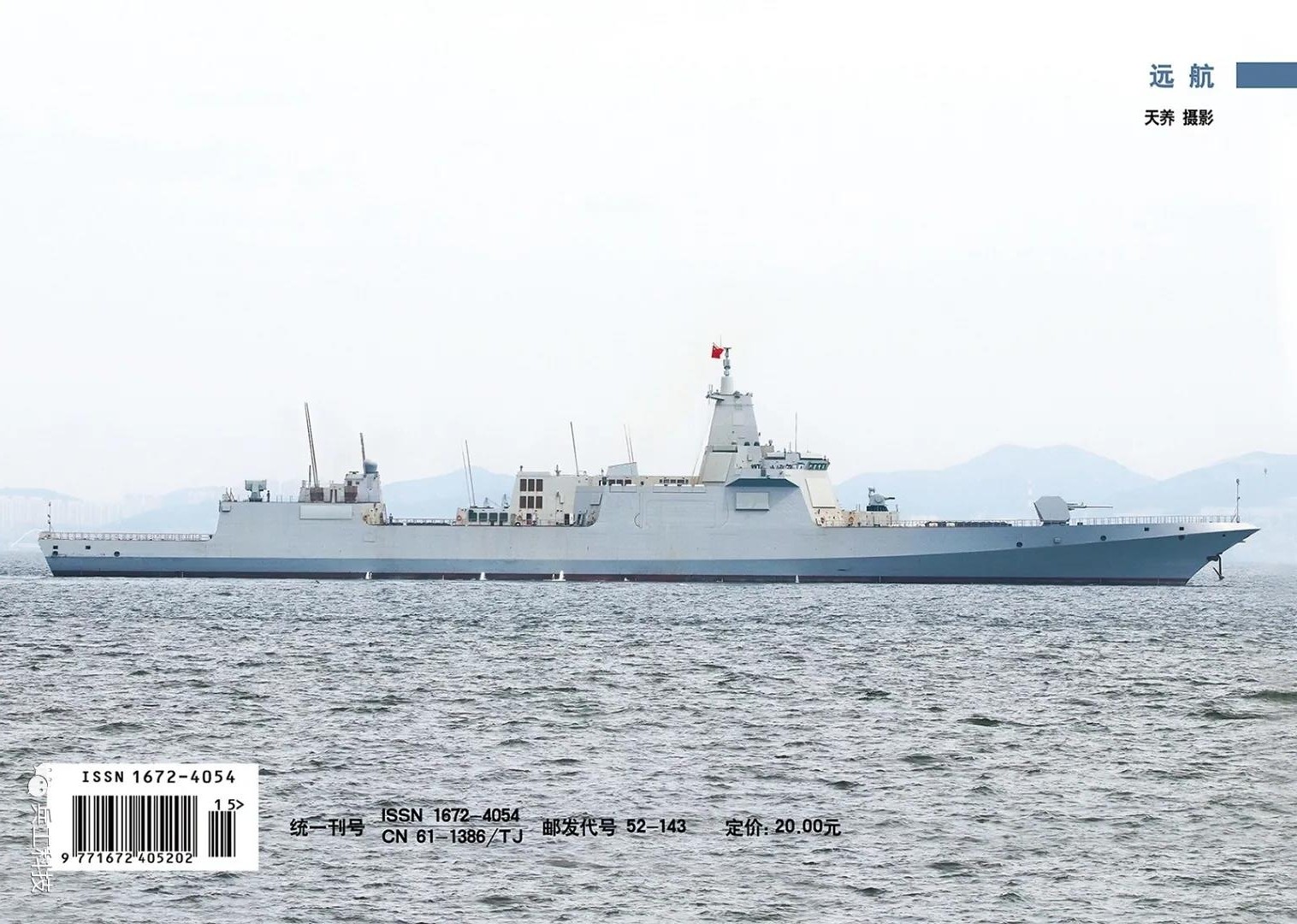 Tam said:
Based on these canisters, do you think DF-100 can fit within U-VLS?

I think diameter is a much larger issue.
85 cm is stated canister diameter. That leaves about 75 cm for max diameter of missile (Mk41 is 25 inch canister, max missile diameter 21 inch).

Moreover such a large missile would require a hot launch (since cold launching would eat up too much length) and so the diameter will be further constrained for vents. 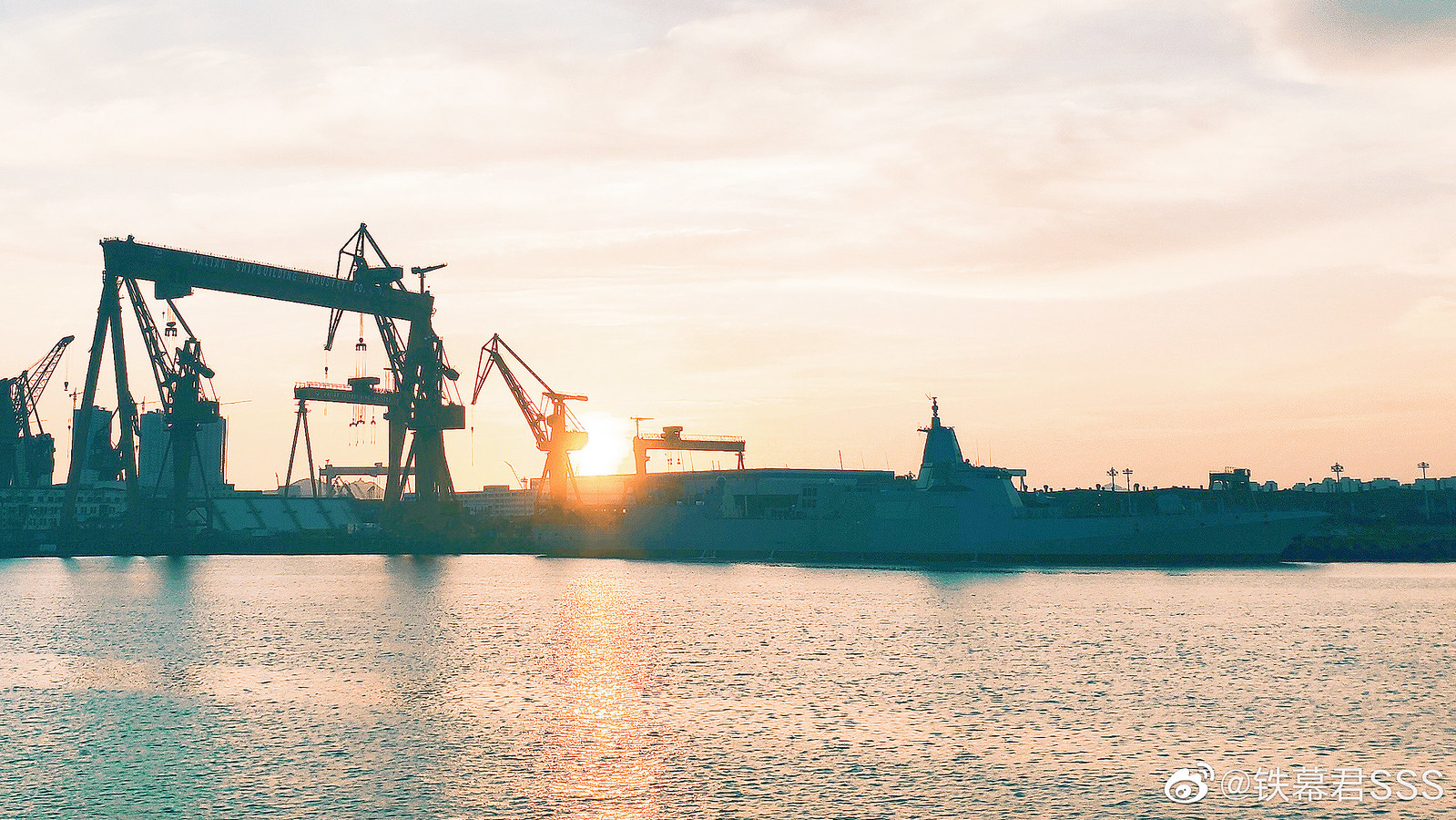 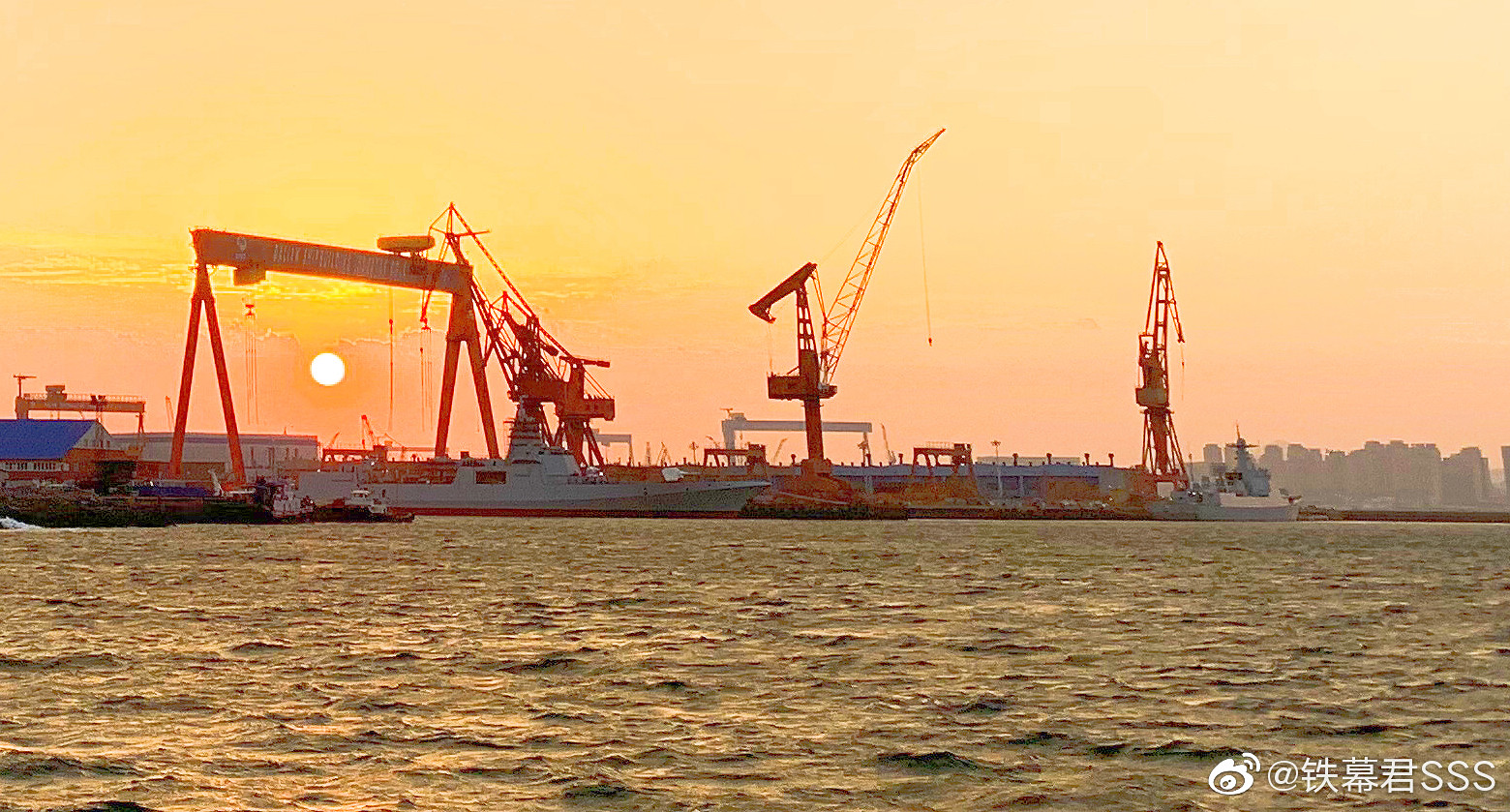 An update from Jiangnan shipyard. 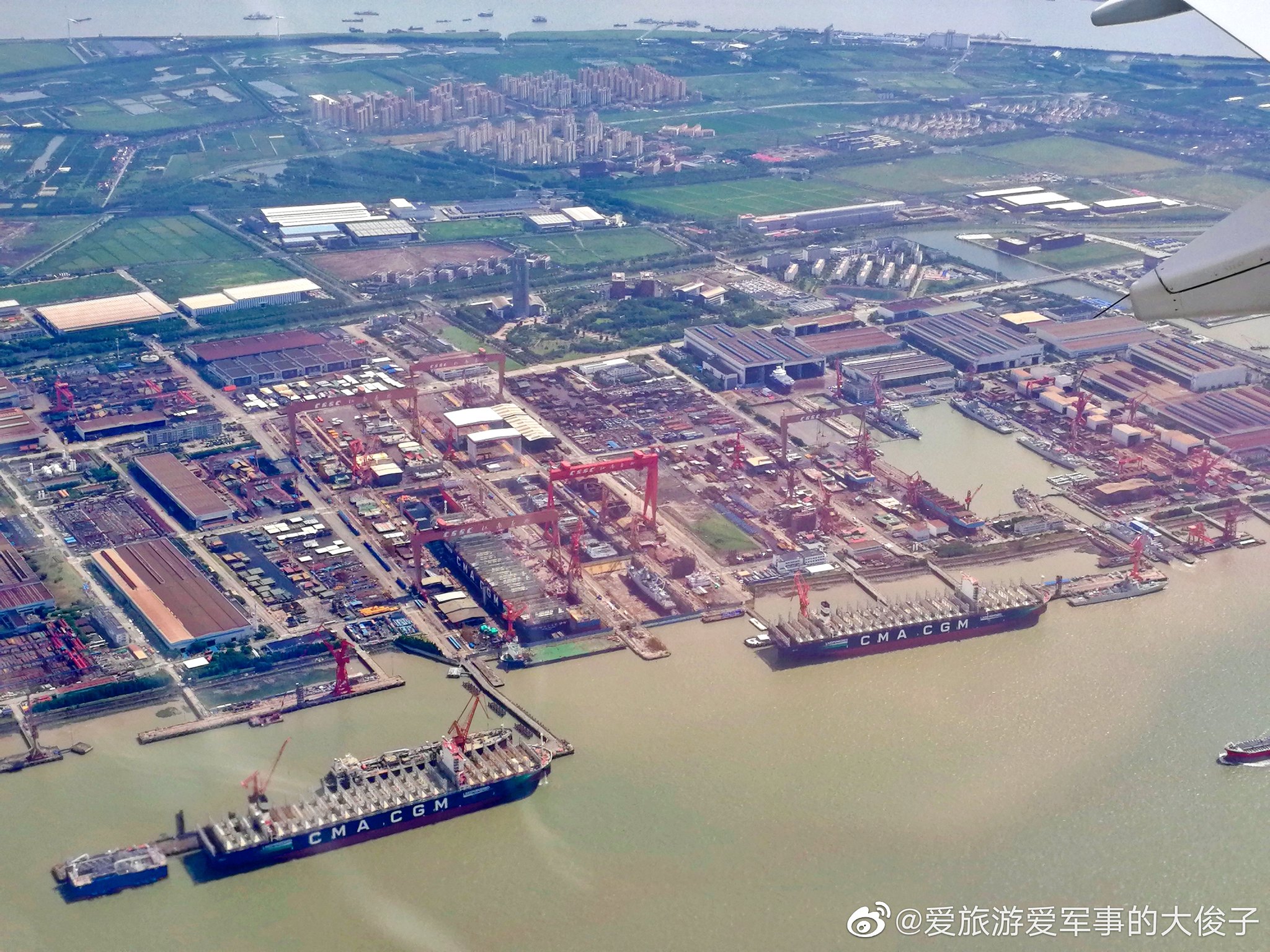 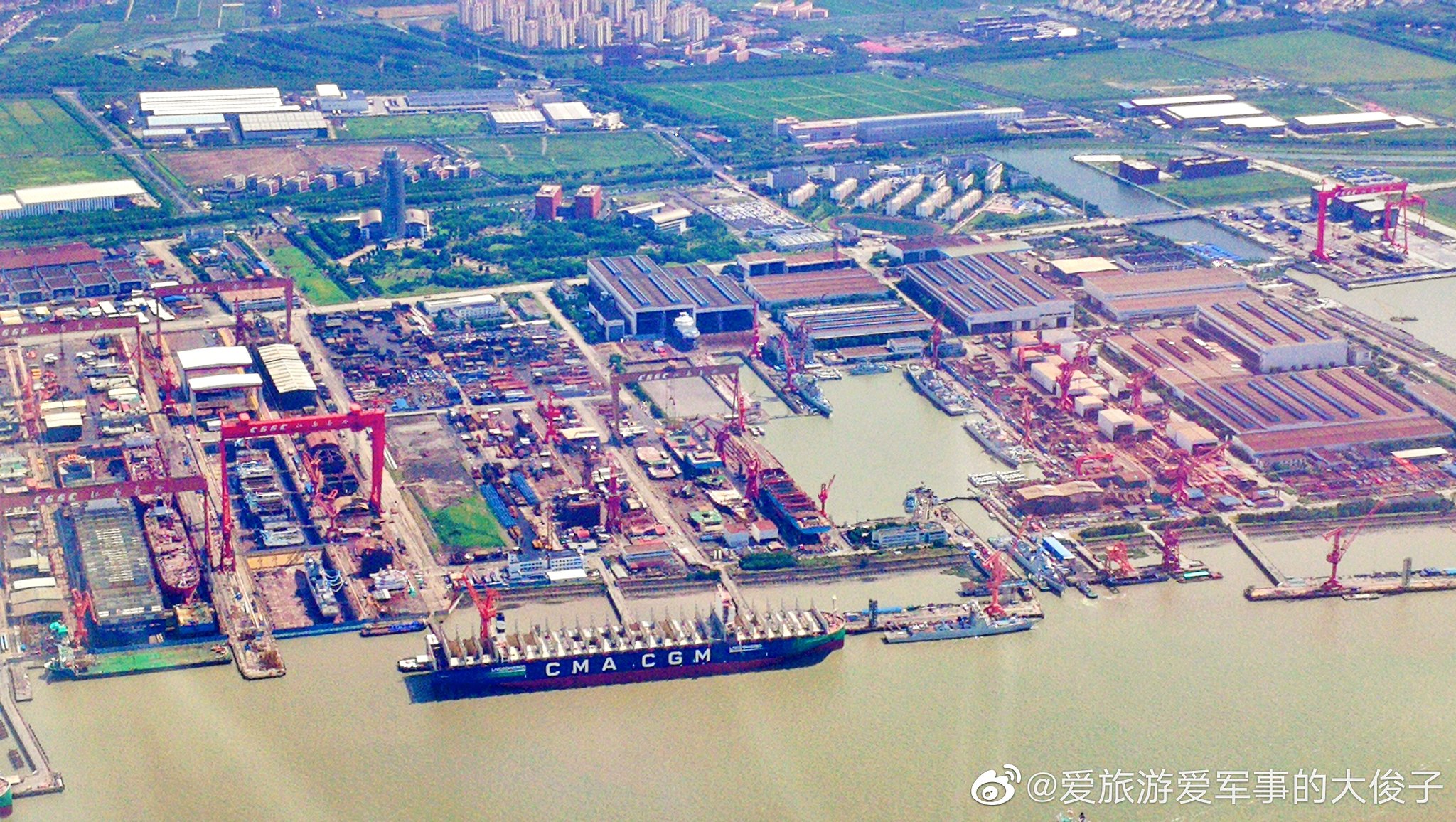 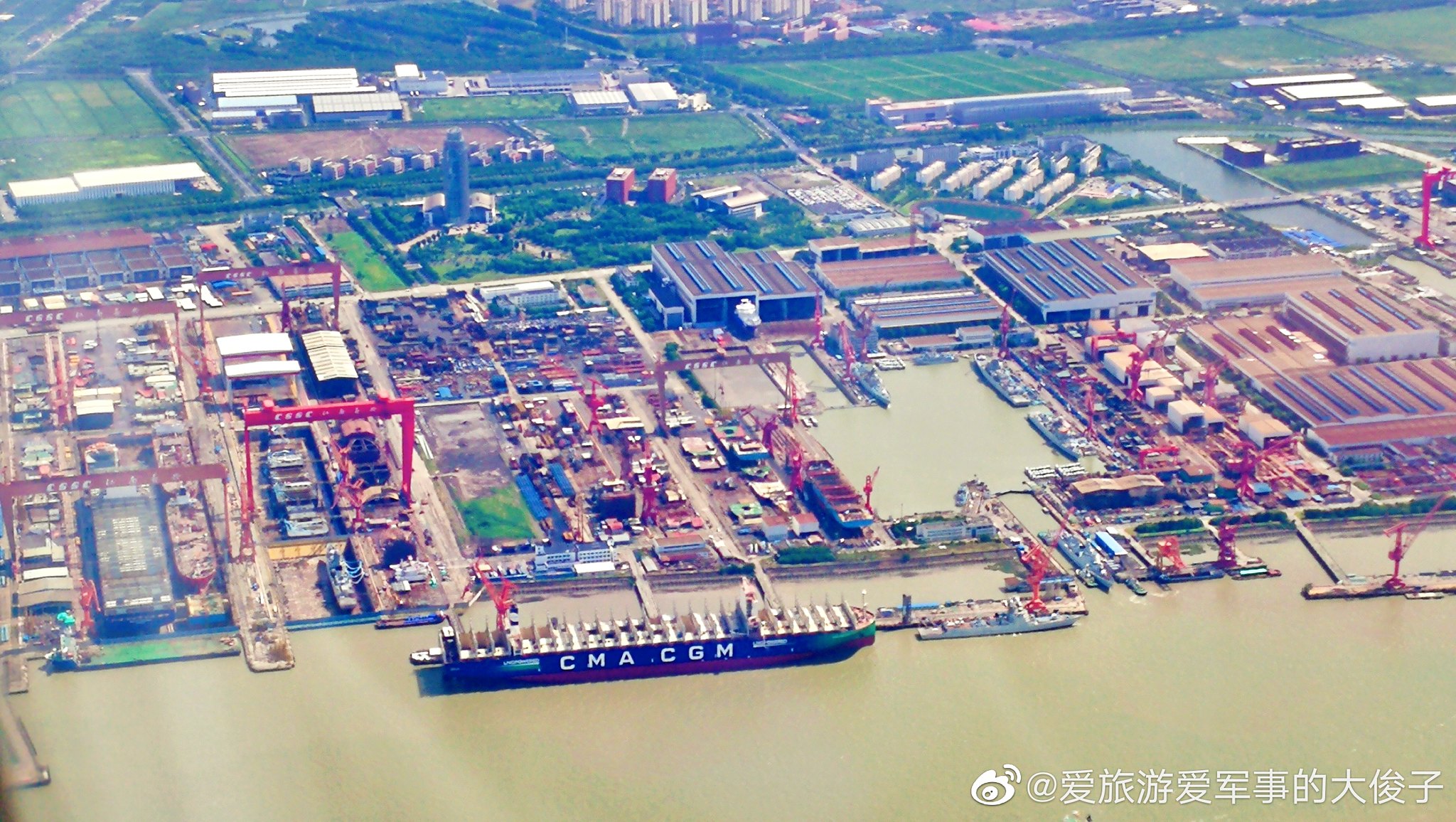 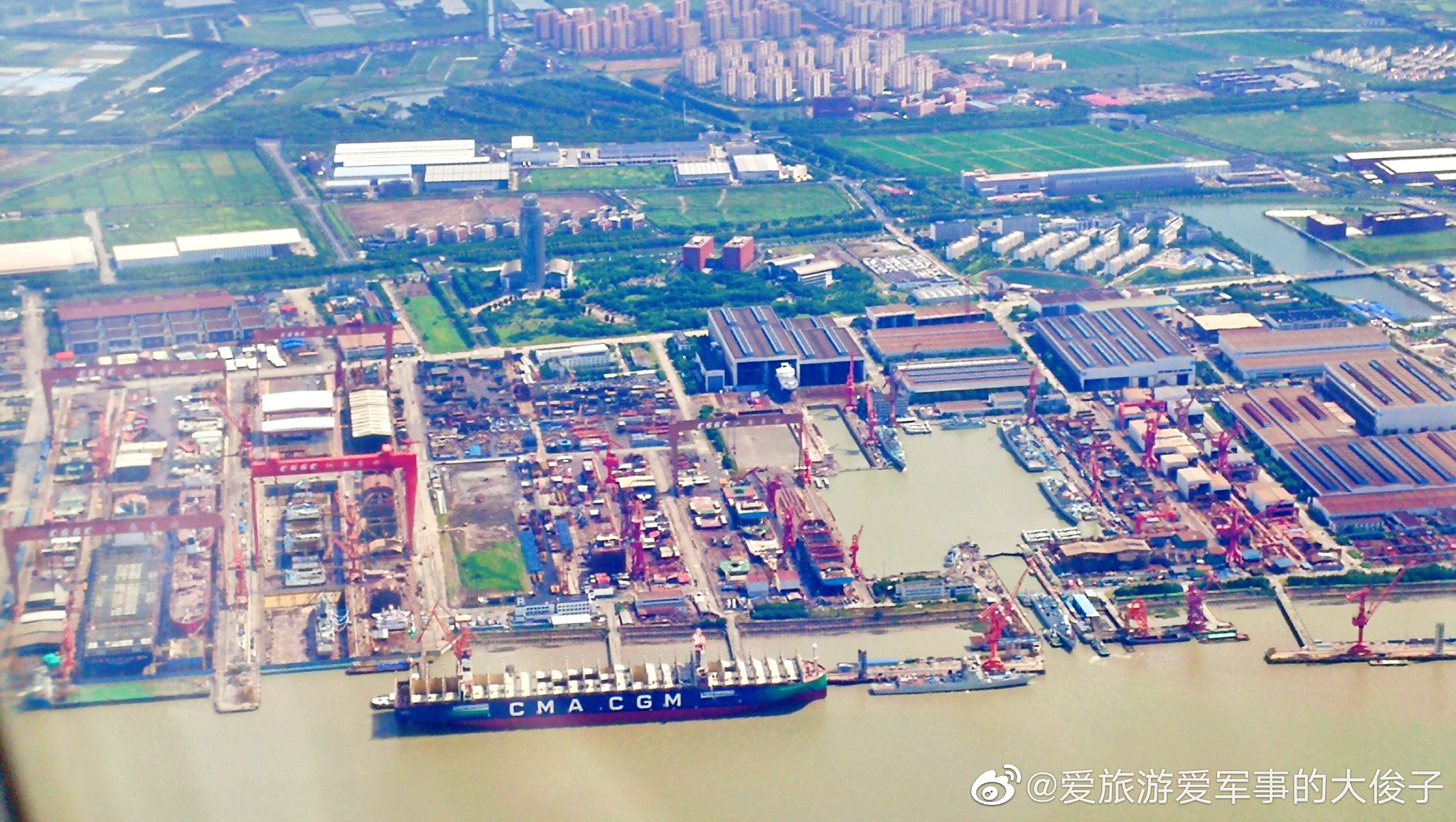 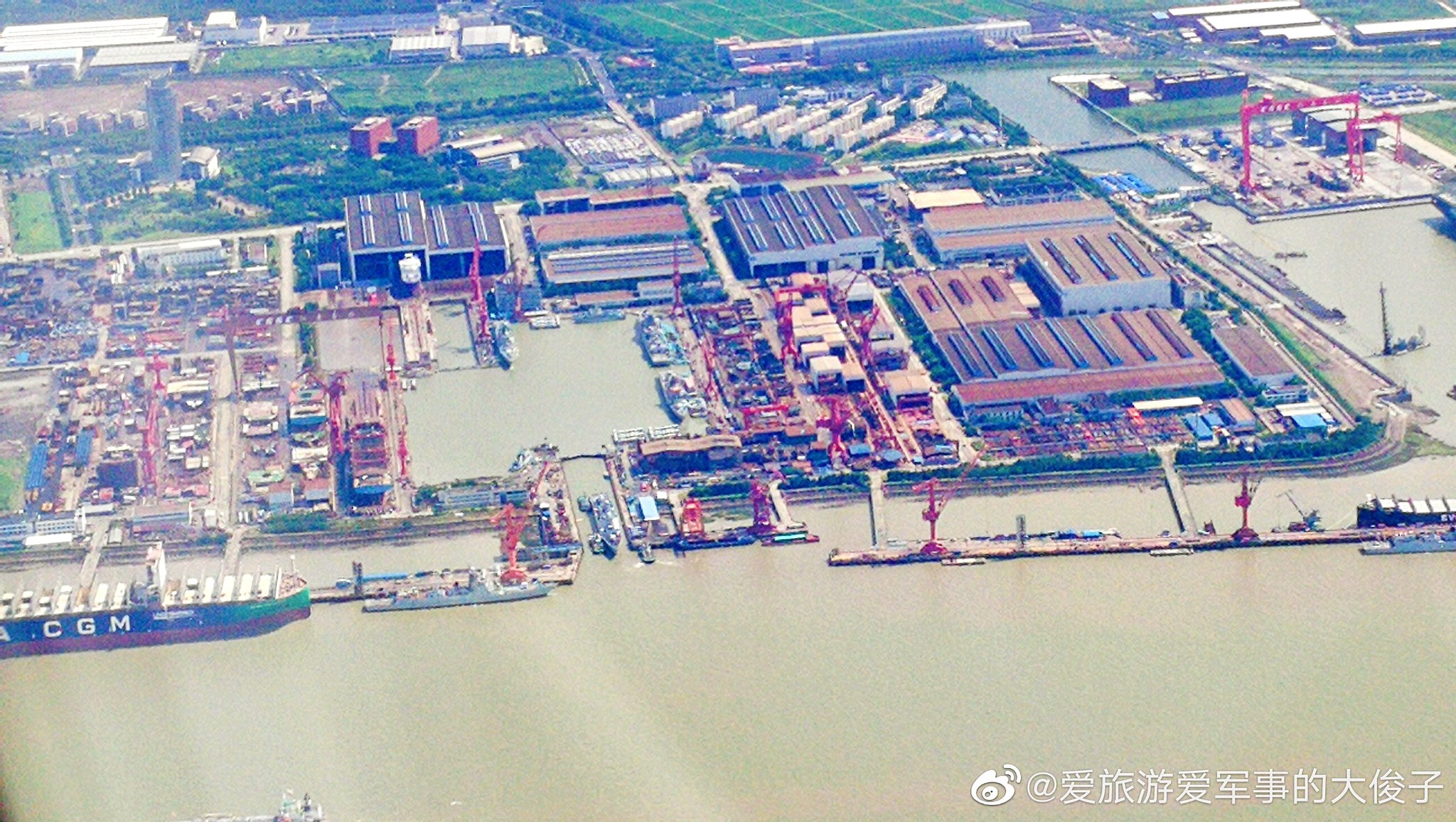