Tam said:
I don't know if they intended each destroyer squadron to completely fill the blank pennant spaces. Just a note. But if they want to do that, they need to go past the 25th 052D. They are going to have to build more. A lot more. Maybe they will save the extra spaces for 052E?

You can make your conclusion from the listings.

Five here if you are assuming replacement of older ships, but IMO 167, 168 and 169 still have more years, and 168 and 169 will get MLU. That leaves this squadron with two spares, 165 and 166 after the retired Ludas. The names Zhanjiang and Zhuhai will be open for adoption by future destroyer.

This squadron is the first to get 052C, and the first to get 052D. The four 052D ever made went as an entire group to the 9th. Since then, they didn't get any new ship. None of the remaining 052DL currently being made is slated for this squadron. So what gives? I suspect this group is going to get 055 in the future instead.

5 more destroyers needed here if you want to fill all the numbers and replace the Sovremenny. But I don't think the Sovremenny will disappear soon.

Question mark if they plan to refit the 051C.

Great breakdown of ships in each squadron. But I feel like you treat 052DL as a completely different ship than reg 052D. I see all the 052D types as the same. Sure there might some radar and other system updates with each blocks but all the 25 hulls are the same ship.
T

Bhurki said:
Pennant 160 is reserved? Or did you miss it? It should be in 2nd squadron..
1st squadron is significantly larger than others. Is its area of responsibility significantly larger or is it because it provides space to capital ships(cruisers etc)?
Click to expand...

I am not sure why some numbers are reserved, like 130 and 160. 160 used to exist as a Luda class but sank from an explosion.

As for the 1st squadron, its the oldest squadron in the PLAN and ended up quite a mess. It started with the first four destroyers of the PLAN, which were WW2 vintage Gnevny class destroyers, formed into this squadron, starting with 101 Anshan. The next ships was 102 Fushun, 103 Changchun and 104 Taiyuan.

Notice the reuse of these names from retired destroyers.

111 was never used. Then it goes to 112 Harbin and 113 Qingdao. So it is interesting that Harbin did not take 101 instead, and its probably because the policy of wrapping the numbers back to 0 or 1 after they hit the 9 did not exist back then. So the numbers flowed sequentially to 110, then for some reason 111 was skipped to 112, which began the modern era of the PLAN with the Type 052 Harbin.

So originally there was three squadrons. There was no Ludas or any preceding ship that used the 15X and 17X numbers until the 052C came, and the reason why the 6th and the 9th were established is for the purpose of this new class. The 9th got the first four 052D, 172 to 175 were all built sequentially, just as the 6th got the last four 052C, 150 to 153, all in a bunch. Note this pattern of four --- the Anshan class was four ships, assigned to the same group, and the Sovremenny was four ships, all four assigned to the same group.

There is a logic to all that, as grouping ships of the same class together means they can share the same logisitic support in one base, rather than to have one base to have a logistic structure meant to support only one ship class. I am certain the first four Type 055 will go to the same base, as it will be more efficient to set up a single logistic structure to support all four ships. But I have a question mark if the next four 055 will still be in the same base or transfer somewhere like Hainan, which will result in a different pennant number to reflect the South Sea Fleet usage.

The 10th is the funny one since this is the newest group but all the Ludas from the 1st were reassigned there to their lasting days. This is the base at Lushun. Instead of starting at 120, the unit started at 119.

The heavy weight on the Qingdao ships is because of the Liaoning which requires her escort. You cannot seriously call 112 and 113, being only 052, as proper air defense escorts, so it falls on 115, 116, 117 and 118 to act as escorts, along with whatever 054A that was assigned to the 1st.

Likewise if a carrier is assigned to Hainan, which may well be the fate of the Shandong, I would expect a handful of 055 to go there. The question is whether they will still be part of the 9th, resuming the pennants 176 to 179, or they will be a brand new squadron, taking the numbers 180 to 183 or 181 to 184.
K

Bhurki said:
Pennant 160 is reserved? Or did you miss it? It should be in 2nd squadron..
1st squadron is significantly larger than others. Is its area of responsibility significantly larger or is it because it provides space to capital ships(cruisers etc)?
Click to expand...

This 1st Squadron is special in historical terms I think. It's also possible the 1st might be split with a new squadron starting from 110 or 111 to 118 pennant ships, while the 055s ships--which fills pennant 101-109 or 110--becomes the 1st Squadron.

Go to Page 394-395, @Tam and another user @feilinreg had a great discussion about the squadrons. In it they mentioned 1st Squadron being the 1st PLAN destroyer squadron so there's historical significant.
T

Kich said:
Great breakdown of ships in each squadron. But I feel like you treat 052DL as a completely different ship than reg 052D. I see all the 052D types as the same. Sure there might some radar and other system updates with each blocks but all the 25 hulls are the same ship.
Click to expand...

I would have preferred to separate the 052D into three blocks. That's why some of the 052D I wrote, I mentioned as being the second block. Between the first and the second block, there are a number of updates. There are also updates that were retrofitted on older 052D and 052C.

The one thing I noticed about the second block of 052D, is that they are being used currently as flagships: 161 for the 2nd, 131 for the 3rd, 155 fo the 6th and 120 for the 10th. But that's also because they are currently the most advanced ship in their respective squadrons.

asif iqbal said:
Tam if you could somehow fix the Wikipedia page with this info would be great
Click to expand... 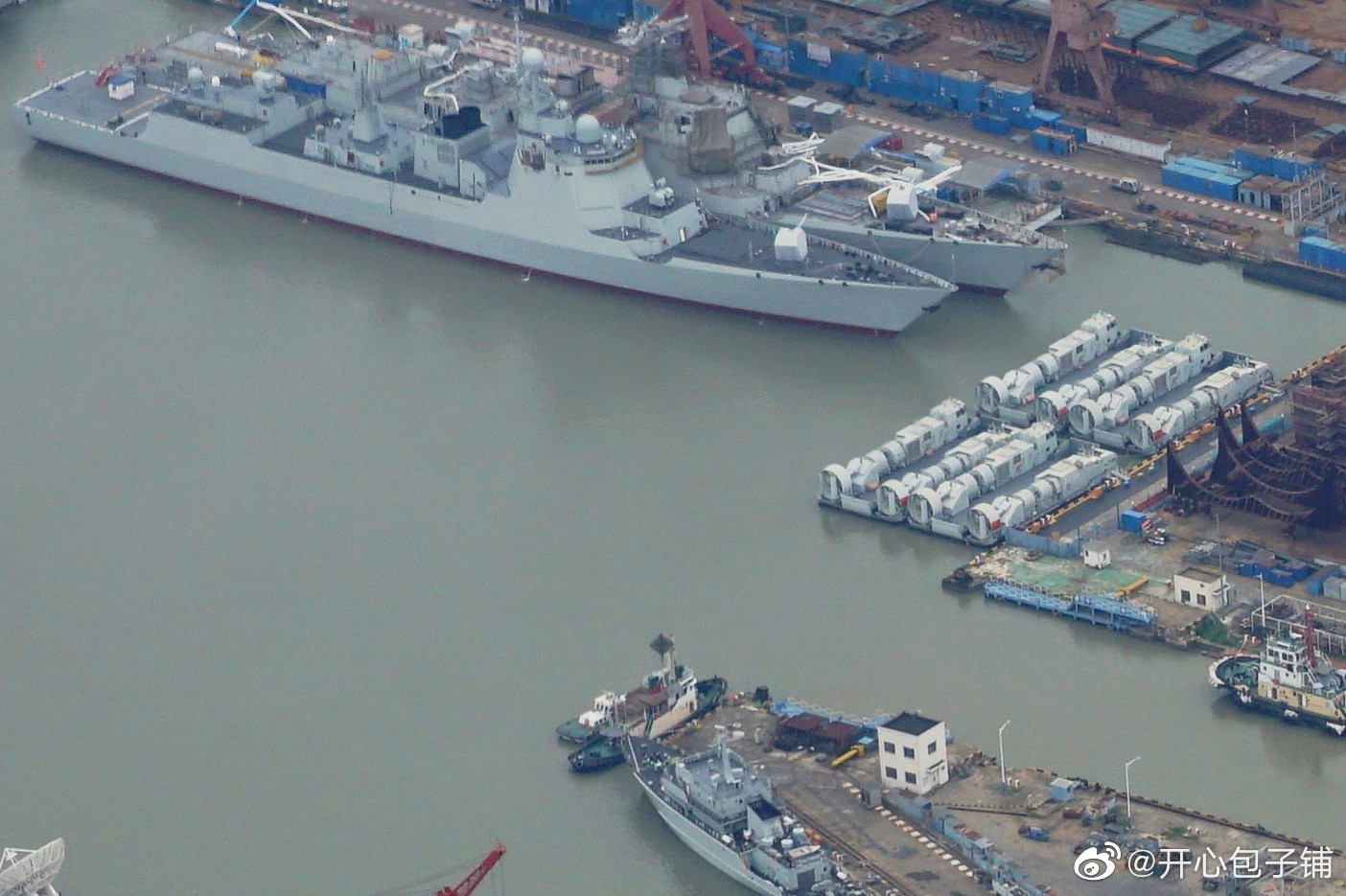 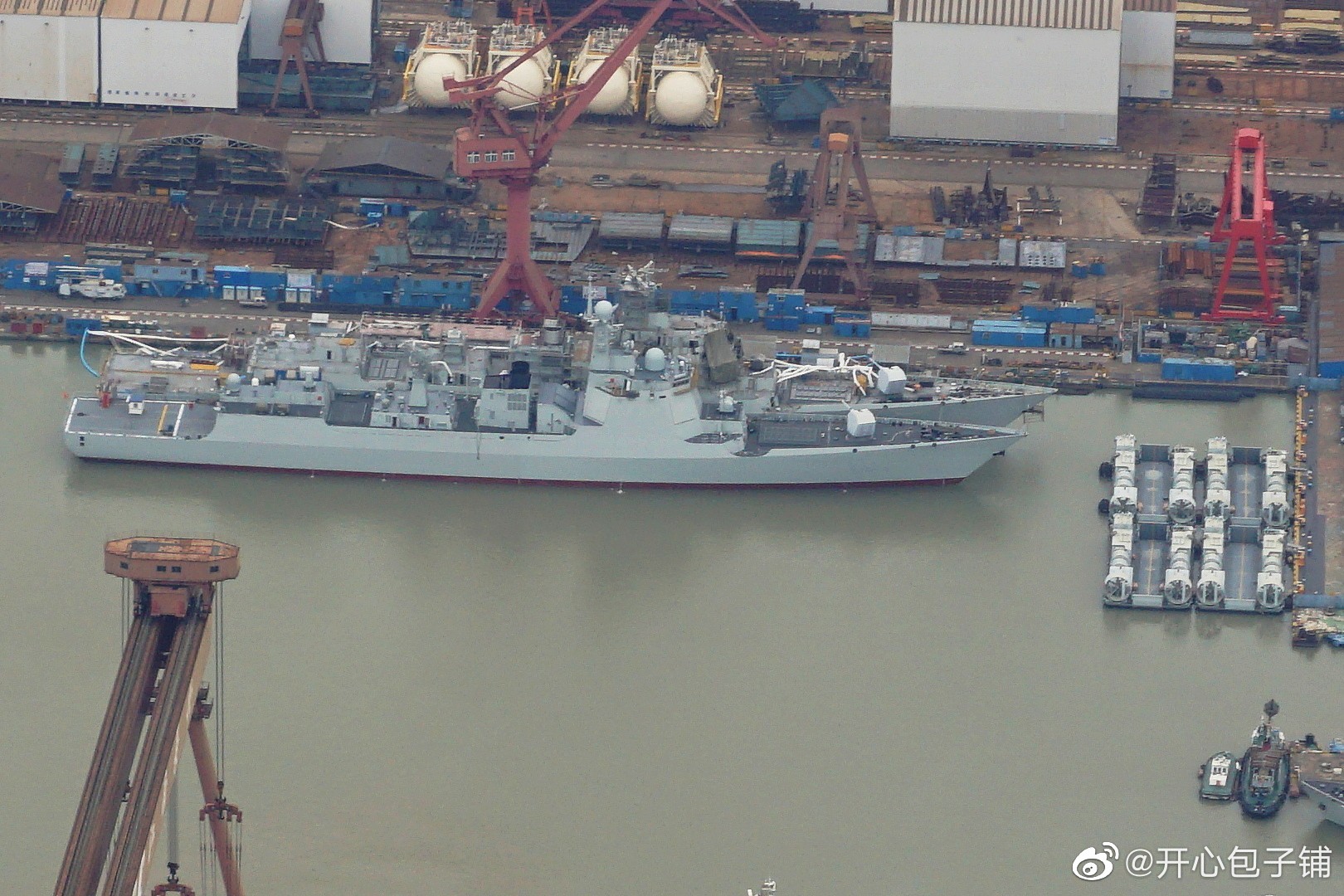 Registered Member
The ship in the foreground looks like its about to go into its maiden voyage soon.

Those look like four large LNG tanks at the back.

As if.... never mind.
You must log in or register to reply here.