Registered Member
They just need to speed up the Beriev A-50U program. They are upgrading aircraft at a snail's pace.
They lack a proper platform to make a smaller AWACS aircraft. Perhaps they could modify a Superjet airframe and use that as a platform?

If they need a long endurance turboprop another possibility would be modifying some Tu-95 airframes to be AWACS platforms.

The nuclear-capable systems are to arrive in Belarus “in the coming months,” President Putin says 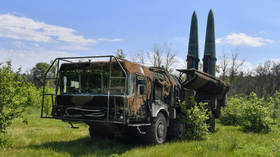 A Russian Iskander-M missile launcher is seen in the course of Russia's military operation in Ukraine. © Sputnik

“The decision has been made. Within the next few months, we’ll transfer to Belarus the Iskander-M tactical missile systems, which can use both ballistic and cruise missiles, in both their conventional and nuclear versions,” Putin announced as the two leaders met in St Petersburg.

The Russian president suggested that the defense ministers and chiefs of the general staff of the neighboring countries should now get together and start “working out all the details of this joint work.”

During the meeting, Lukashenko also asked Russia for assistance in upgrading Belarusian jets so that they could carry missiles with nuclear warheads.

He said he was increasingly concerned by training flights of US and NATO nuclear-capable warplanes near Belarusian airspace.
Putin agreed to help, saying that “this modernization should be carried out at aircraft factories in Russia. We’ll agree on how to make it happen.”

In May, Lukashenko announced that Belarus had purchased the “required” number of Iskander-M mobile missile systems and S-400 air defense systems from Russia. He also said that Moscow would assist Minsk in producing missiles, including those used by the Iskanders.

Iskander-M systems (the NATO reporting name is SS-26 Stone) were put into service with the Russian military in 2006. They can fire missiles with both conventional and nuclear warheads at a distance of up to 500km.

zhangjim said:
But many things are not so optimistic.
Chinese military enthusiasts do not think the Ka-52 is better than the Z-10.The most important reason is simple: They don't believe in the production speed of Russia.
The purchase of Su-35s is very unsatisfactory,the delivery speed is too slow, wasting a lot of valuable time.
The contracts of IL-76 and IL-78 can in fact be considered as breach of contract.So whether China is willing to sign such large-scale procurement contracts is a question,the ka-52k is not a helicopter that can be supplied immediately.
Click to expand...

They should sell China the intellectual property for China to produce the Ka-52 in addition to real copies, the real copies are simply so they accept some development risk for Chinese electronics integration. That is the real key part.

A Chinese version of Ka-52, let's call it Z-52, would be produced more and improve Chinese helicopters as a whole due to the engine alone.

I would like to remind you that we talked about the presence of serious problems in this component in
Please, Log in or Register to view URLs content!
dated November 9, 2021, when we counted how many AWACS aircraft Russia has. According to open data, in our country there are only 9 old Soviet AWACS A-50 aircraft made on the basis of the Il-76, of which only 4 have been upgraded to the A-50U level.
Click to expand...

Please, Log in or Register to view URLs content!
The problem with turbo prop AWACS is they slow, fly at lower altitude and ergonomics are not comfortable for long flight times. There is whole series of tests needed for level of operational readiness and duration of war tempo. This assuming small AWACS can detect small targets on time as only really advanced missile systems can intercept. what if it only detect at 50km and there is nothing to shoot it down?
cruising speed of E-3 is only 360mph. this the impact of Antenna on airframe.

When Israeli upgraded A-50I they created so many workstations. this show scale of data AESA radar and passive system can capture.
A-100 is even more complex with modified engines, special protection on cockpit to protect against increase power of radar, even more pods and antennas on airframe. the scale of data processing will be another level.

Please, Log in or Register to view URLs content!
A separate block of the program is dedicated to the production of aircraft engines for the entire line of civil aircraft. The United Engine Company is already developing, modernizing and increasing their production in the required volume. In total, by 2030, the production of almost 5,000 engines for aircraft and helicopters is envisaged.
Click to expand...

Registered Member
The Russian Defense Ministry showed footage of the combat duty of the crew of the Nebo-SV radar and the combat work of the Buk-M3 air defense system. The calculation of the 1L13 "Sky-SV" radar station searches and detects targets and determines their nationality by sending a "Friend or Foe" request. Based on the results of the target's response, the radar crew makes a decision to destroy the target and transmits the data to the crew of the Buk-M3 air defense system. The detection range of fighter-type targets at high altitudes reaches 380 km, at low altitudes up to 65 km. The Russian radar "Nebo-SV" was put into service in 1986.
The station "Nebo-SV" has become the main means of reconnaissance of an air enemy in air defense, forming a duty radar field in the operational link of military air defense. The high combat and operational characteristics of this station have been repeatedly confirmed in various exercises and during combat duty by air defense formations. The system is also in service with Iran.

gelgoog said:
They lack a proper platform to make a smaller AWACS aircraft. Perhaps they could modify a Superjet airframe and use that as a platform?
Click to expand...

well TU-214 can and apparently could be the case but it never went anywhere, sadly.


gelgoog said:
If they need a long endurance turboprop another possibility would be modifying some Tu-95 airframes to be AWACS platforms.
Click to expand...

That was the original plan back in 60's but well. it's just not suitable thus why Tu-114 was chosen and gave birth to Tu-126. Yeah, Russia/Soviet's first AEW was in fact a long range turboprop.

Because it's probably written without consideration of some technical merit e.g Frequency and what AEW needs for kind of Russia. Frequency was one of the important thing. What frequency does the KJ-600 operates ?

If it operates like E-2 Hawkeye (UHF band) Then overland performance would be undesirable and it may not be able to heightfind properly. As such Kj-500 if Russians ever interested would be advantageous as it works in S-band which everyone else does.

If it operates in S-band Then other considerations like comfort and endurance comes to play. This will determine the number needs to be procured. e.g 5 hours endurance for say 24 hours desired coverage will need maybe 4-5 AEW or twice of that depending on numbers of AEW desired to be deployed.

If the endurance can be longer say 9 hours of maybe 10.. as KJ-500 seems big enough to have a real resting facilities. then the number required could be less.

One may have 3 for each sortie where two AEW are providing coverage with 1 standby in case of another have an emergency.
Last edited: Jun 28, 2022