There was this old export frigate concept. I was wondering at the time what this radar might be. 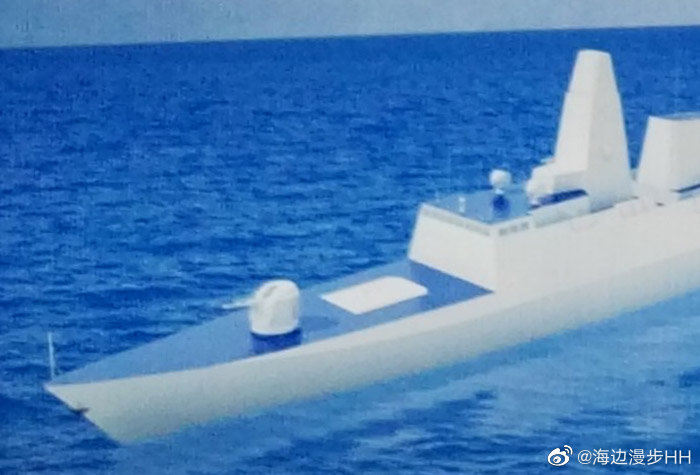 Registered Member
If I remember correctly, this fan-made concept was posted in 2018 or so. Some more (
Please, Log in or Register to view URLs content!
):

02 hull design:
The ships of this class have used the mature construction technology of the Type 055 destroyer in large numbers, and their appearance has adopted a low detectable tilt design. The stealthy materials and coatings are used extensively on the surface of the ship. The overall radar cross-sectional area of the ship is equivalent to only one electronic countermeasure metal decoy.

The capacity of the upper structure is larger than that of the 054A to increase the sealability, and the width is increased to be the same as the width of the ship's side and integrated with it. The front and rear masts adopt a tower structure, and the front mast uses a fully-enclosed synthesis mast, which provides a larger installation space for electronic equipment and is optimized for electromagnetic compatibility. The entire ship is made of steel and adopts a gas-tight fortress structure that can resist nuclear explosion and external pollution.

Protective armor is installed around the main battle command cabin, power cabin, and hair extension system, and a hollow structure is also reserved in the middle of the bulkhead to improve The ability to resist ammunition fragmentation; the hull adopts a modular design, the ship has 12 hull modules, 4 bridge modules, 2 mast modules, 1 hangar module and 1 power cabin module. Each module is equipped with independent ventilation control system, power supply and distribution system, fire extinguishing system and nuclear chemical and chemical washing system.

Different from the 054A's traditional mechanical transmission propeller propulsion, this class of ships uses four 10MW waterless thrusters to completely eliminate spindle transmission noise. In the low-speed silent mode, the battery-driven propeller can be used to obtain the best Silence effect. In addition, the vessel is equipped with a shaftless thruster that effectively reduces the turning radius. It is also equipped with an advanced hull stabilization system.

The computerized control system incorporates information such as the roll stabilization system and the ship's heading/rudder surface settings. It calculates the angle between the control rudder surface and the stabilizing fin to compensate for the roll and hull of the ship. Shake, can still carry out the combat task in the 6 sea conditions, can still sail safely under the 8 sea conditions.

04 battlefield perception:
This class ship adopts a three-level search system, which constitutes a far-in-near-three-layer sensing system. A double-sided rotating array radar is installed on the rear stern, and the main front is an S-band phased array radar using 364A phased-array radar technology. Responsible for search missions in the entire airspace. The maximum detection range is up to 320 km.

The deputy front is an L-band frequency scan slot array radar. It is mainly responsible for remote surveillance missions and has anti-stealth target capabilities. The maximum warning distance is up to 400 km. Three large-scale X-band multitasking digital array radars are installed on the mast, responsible for tasks such as low-altitude search, target indication, fire control illumination, and ventilation tube detection. The maximum detection distance is 180 km.

06 short-range defense:
This class ship is equipped with a stealth version of the H/PJ-11 11-tube 30mm naval gun and HQ10 short-range defense missile, which constitutes a double-decker defense system, which has greatly improved the defense capabilities of the 054A frigate. The H/PJ-11 11-tube 30mm naval gun is a close-in defense weapon system (CIWS) using 11 tubes of 30mm Gatling quick-fire guns, equipped with a radar, optical, and infrared tracking system that can lock 48 at a time. Or more goals. Launched a 30*165 mm caliber gun shell, with a maximum firing rate of 11,000 rounds per minute and 1280 rounds. The longest range of the HQ-10 short-range defense missile can reach 10 to 12 kilometers, and the accuracy of the attack is higher than 95%.

07 Shipborne Gun:
This class ship is equipped with an improved PJ26 76.2mm naval gun, which uses a less detectable stealth turret than the main gun mounted on the 054A. It is non-combat, and the barrel is housed within the turret, improving the target indication. Equipment, and provided by the main X-band radar target information and fire control, can launch new programmable air defense ammunition, greatly enhance the air defense capabilities.

08 VLS:
The main weapon delivery system for this class of ships is the vertical launcher of a total of 48 units of hot and cold co-aircraft missiles. The front of the hangar is equipped with a 16-unit universal VLS. The launcher unit has a caliber of 850mm and a depth of 900cm and can be used on the active service. All ship-launched missiles. Compatible with the launch of small drones. Due to the large size of the universal hair extension, the installation position on the small and medium-sized ships is limited. A 32-unit general-purpose VLS is installed on the front. The maximum unit diameter is 680mm, and the diameter of the projectile can be less than 500mm and the length of the bullet is less than 650cm. The various types of missiles are mainly equipped with the HQ-16C ship-to-air missiles and YU-8 anti-submarine missiles to carry out air defense and anti-submarine missions. Compared to the 054A's universal hot vertical hair, it can be compatible with more types of missiles. 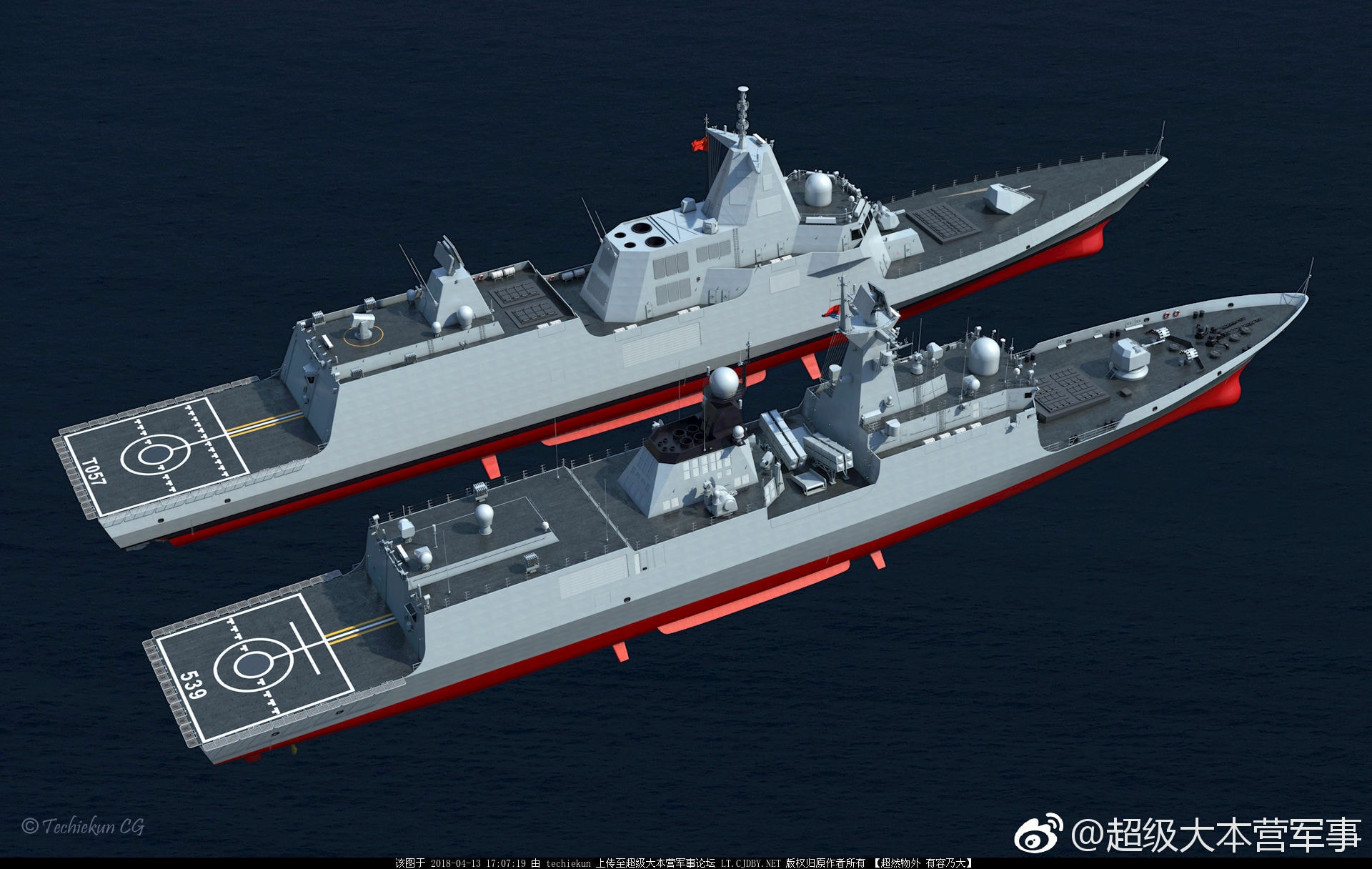 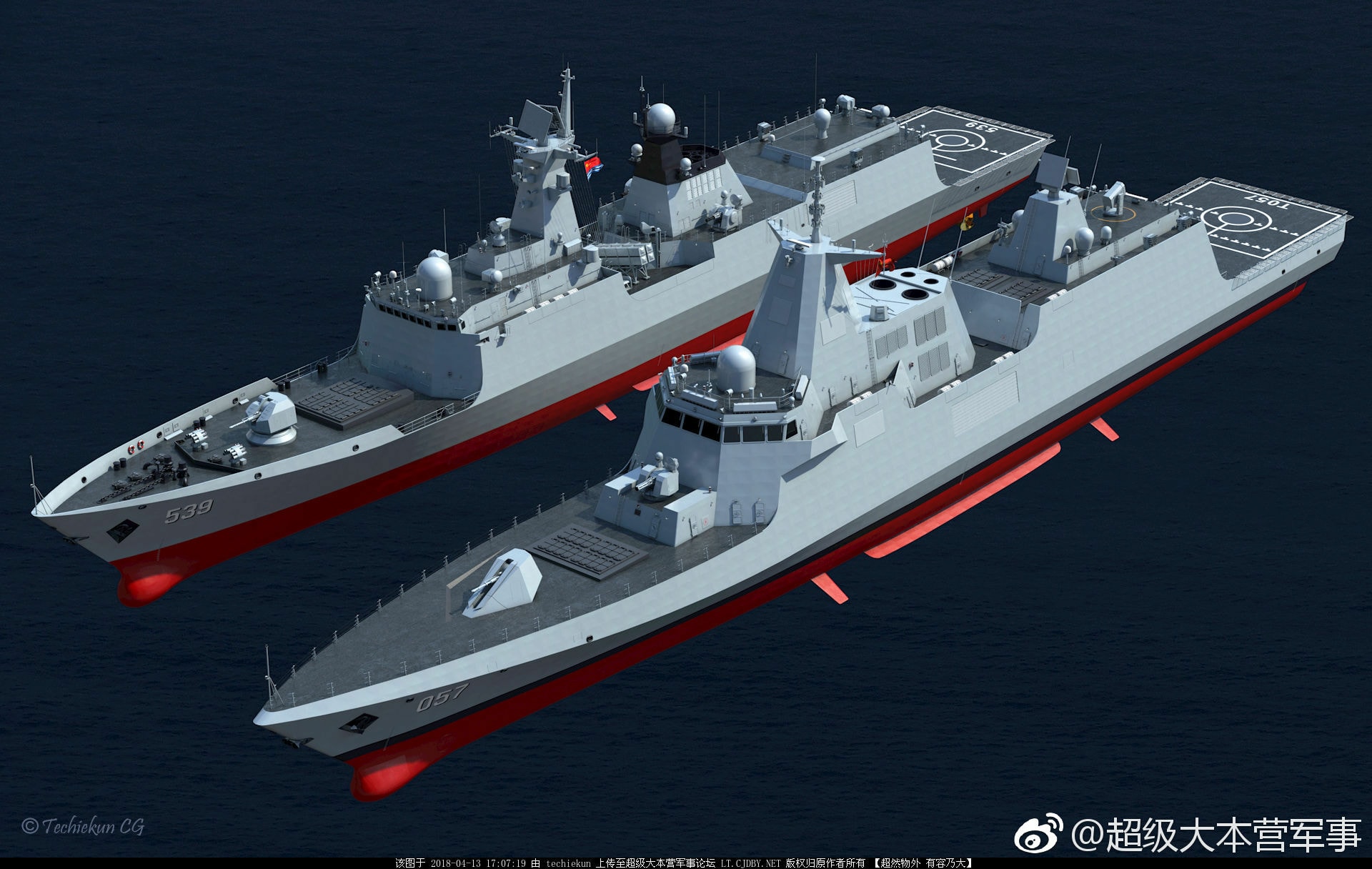 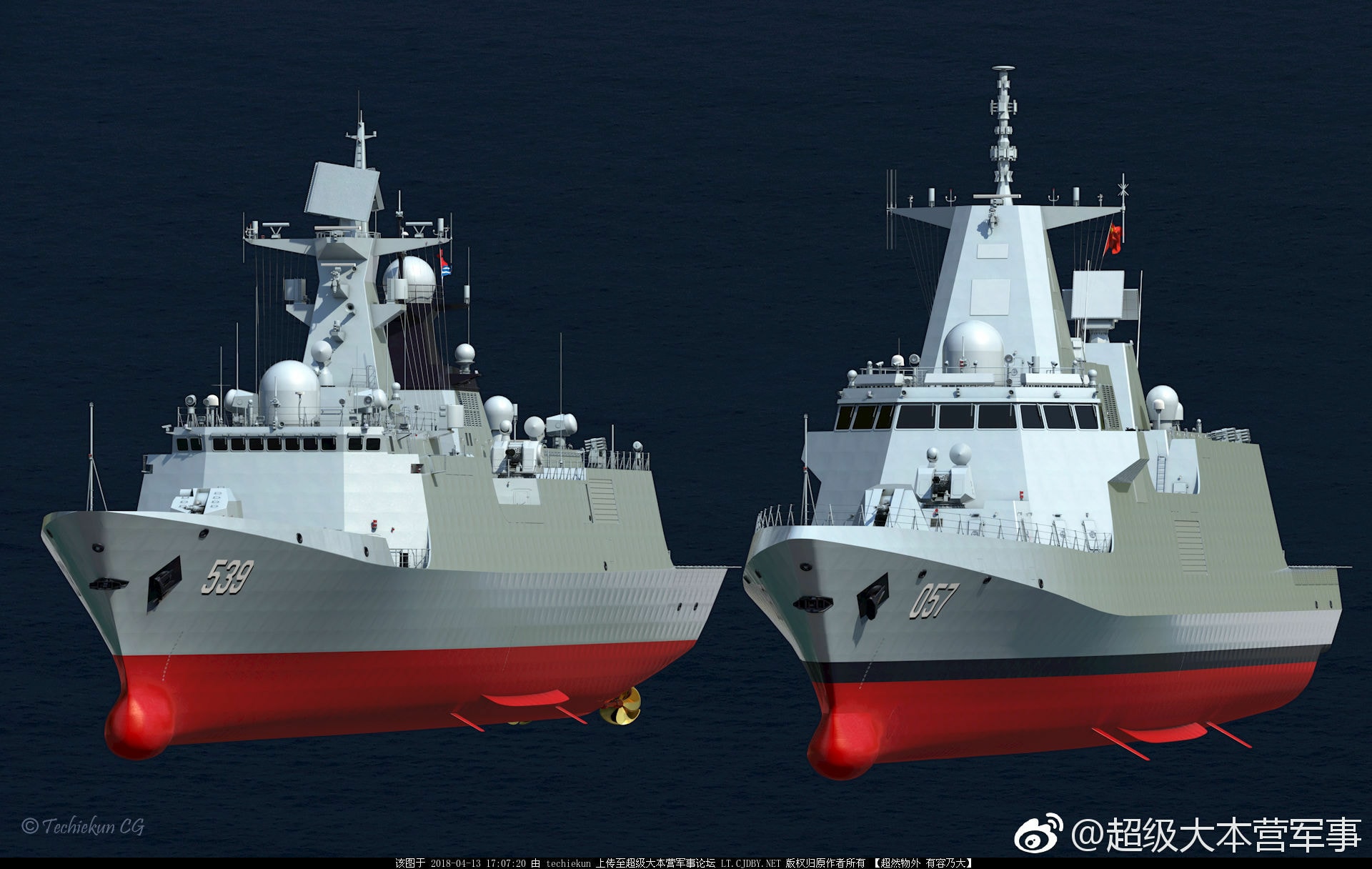 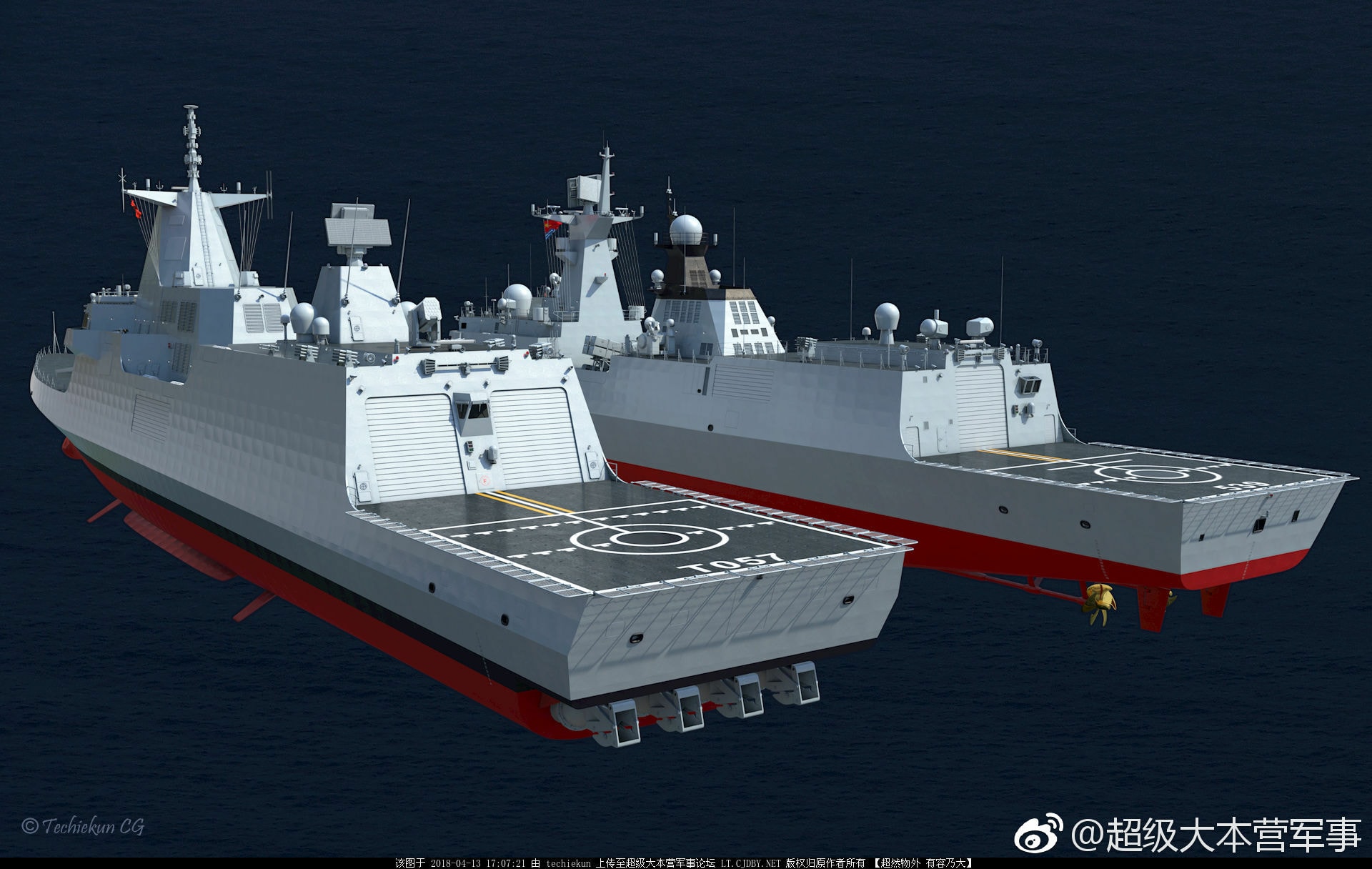 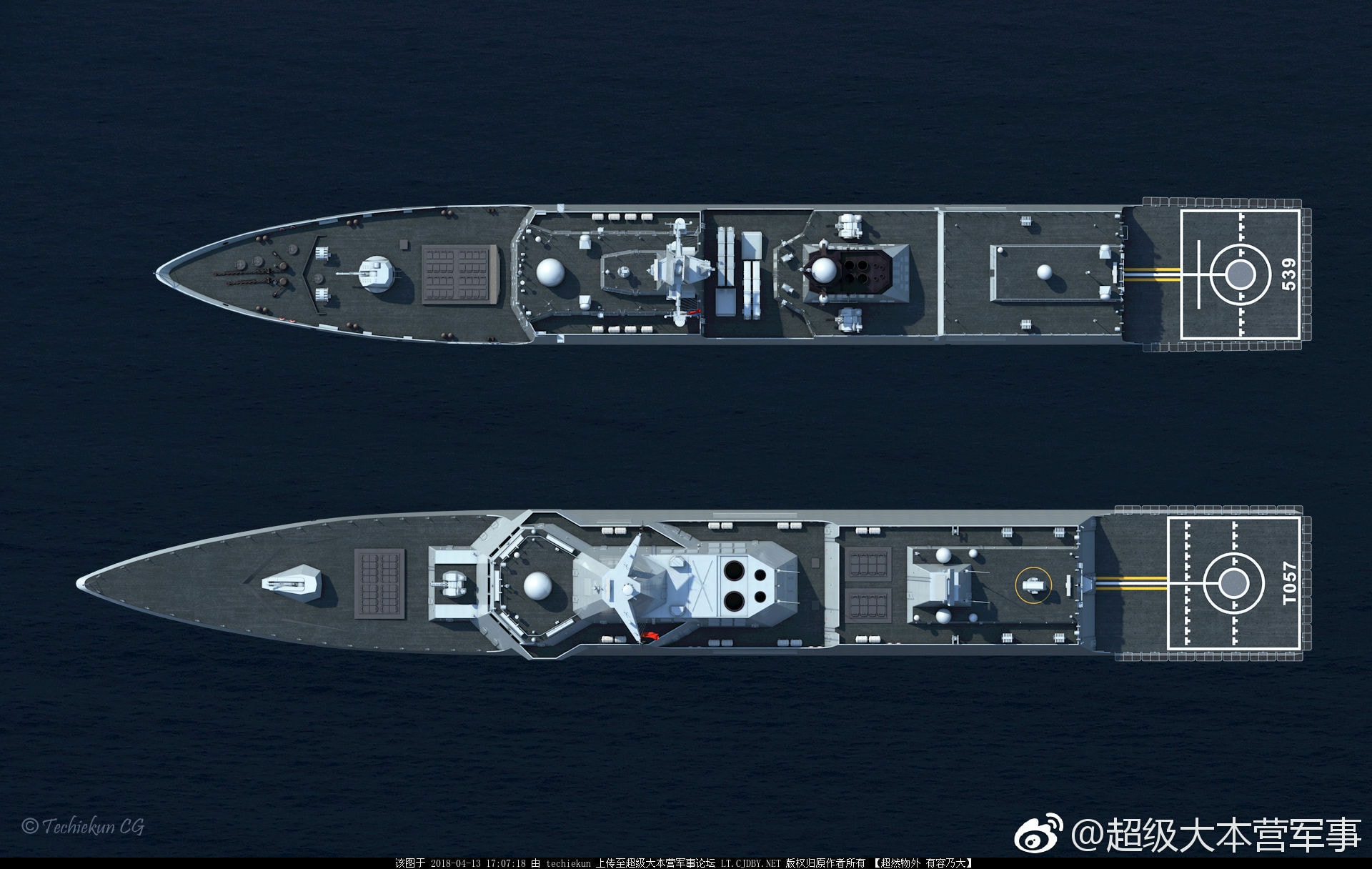 How would you expect to fit aft VLS AND twin hanger on a frigate?
T

His use of three sided X-band radar arrangement instead of four is to be commended. Why three instead of four? Cheaper that way. Unlike other fan designs, he is cost minded in his design which is unusually considerate for fan designs.

Cost --- determining how much the PLAN is willing or not willing to spend on the ship --- is what makes predicting the next generation Chinese frigate a bit more difficult. You can have a low end or a high end frigate design, particularly when it comes to the sensors and the systems.

I for one, might think that both radars --- the one spotted on the Type 075 and the one spotted on Test ship 891 --- would both be on the 054B, with the larger radar on the primary front mast and the smaller radar on the secondary aft mast. That parallels the current 054A arrangement with a primary search radar followed by a secondary search radar. Then below the larger radar is an integrated mast, with the new X-band radars from the 055 fixed on four sides, with CEC panels on top of that radar and IFF strips below.

There was this screen capture from CCTV9, but I was never able to locate the video. Not sure if it's an old proposal or still current, or whether it's a successor to 054/A or merely a MLU. I suppose the quickest way to upgrade 054/A is to leave the hull intact and update only the sensors, electronics, and weapons.

Registered Member
Assuming the mast is strong enough to hold these new radars and has sufficient power, I am thinking of install this from the test ship 891 on the top mast of the 054A to replace the Type 382 radar.

This is similar to what I was proposing the 054B might be.

The X-band radars is the largest square here, set on all four sides of the mast.

While the 054A MLU will retain the legacy Type 344 gunnery fire control and the Type 366 anti ship fire control radars. 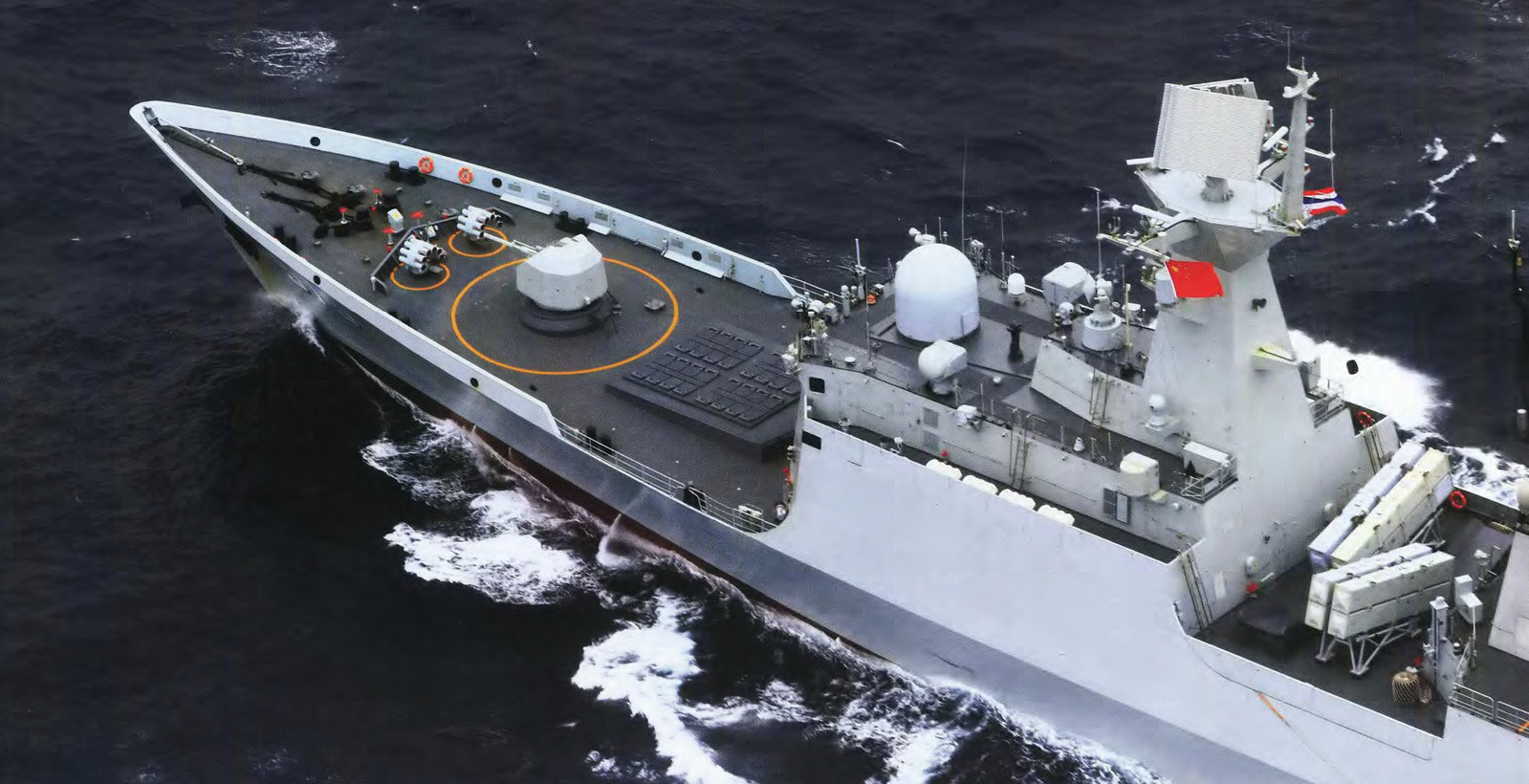 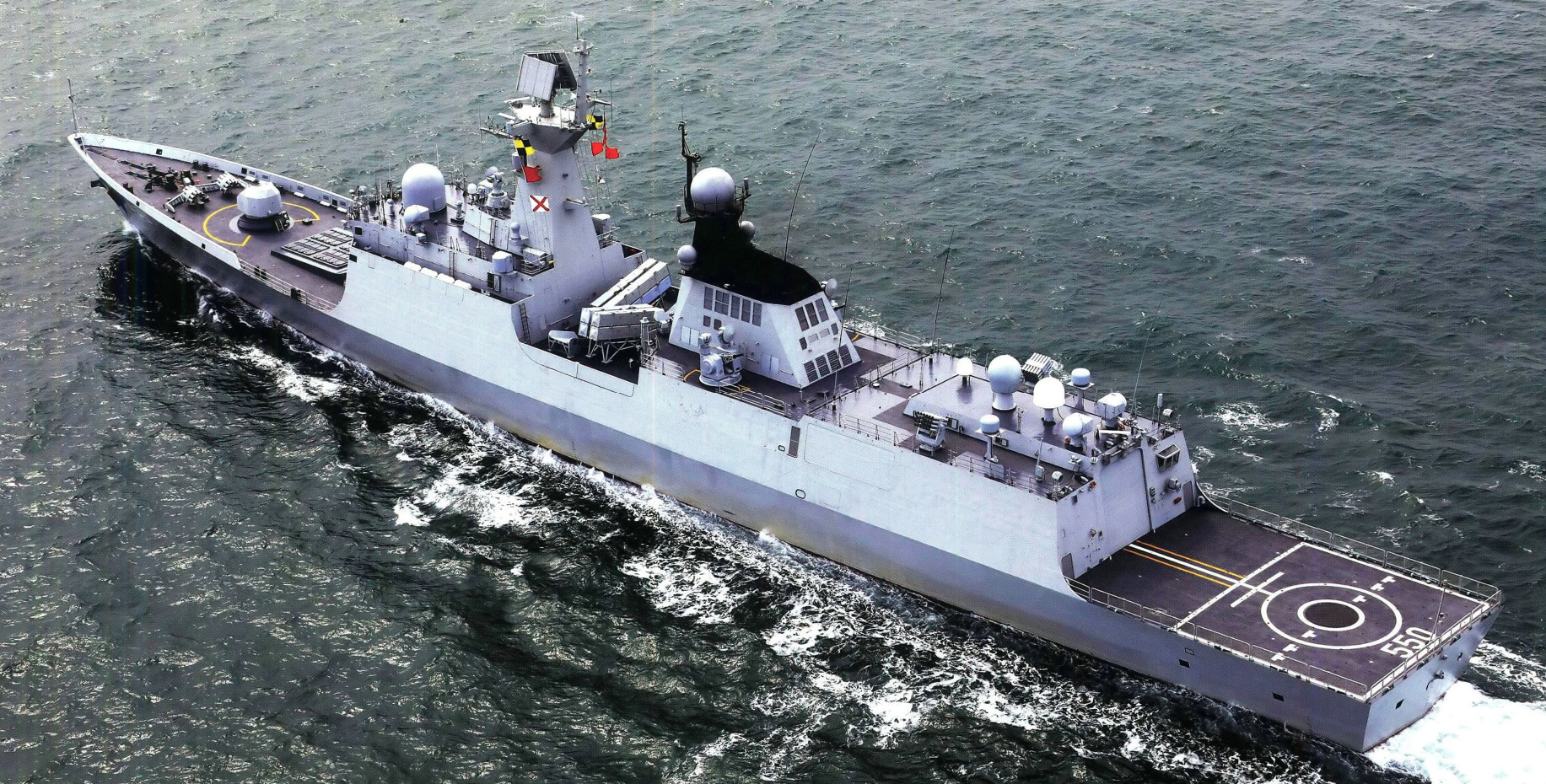