Via LKJ86 New one This is probably the first time that the interior of the Chinese ASW patrol KQ-200 has been seen in public. 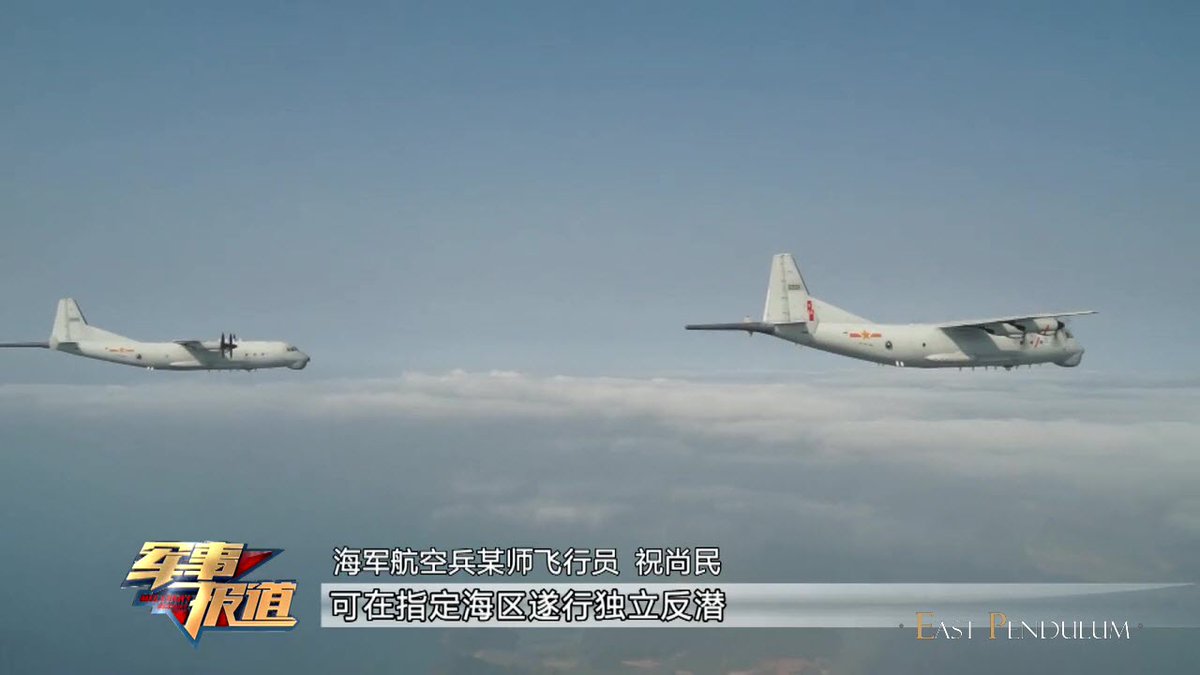 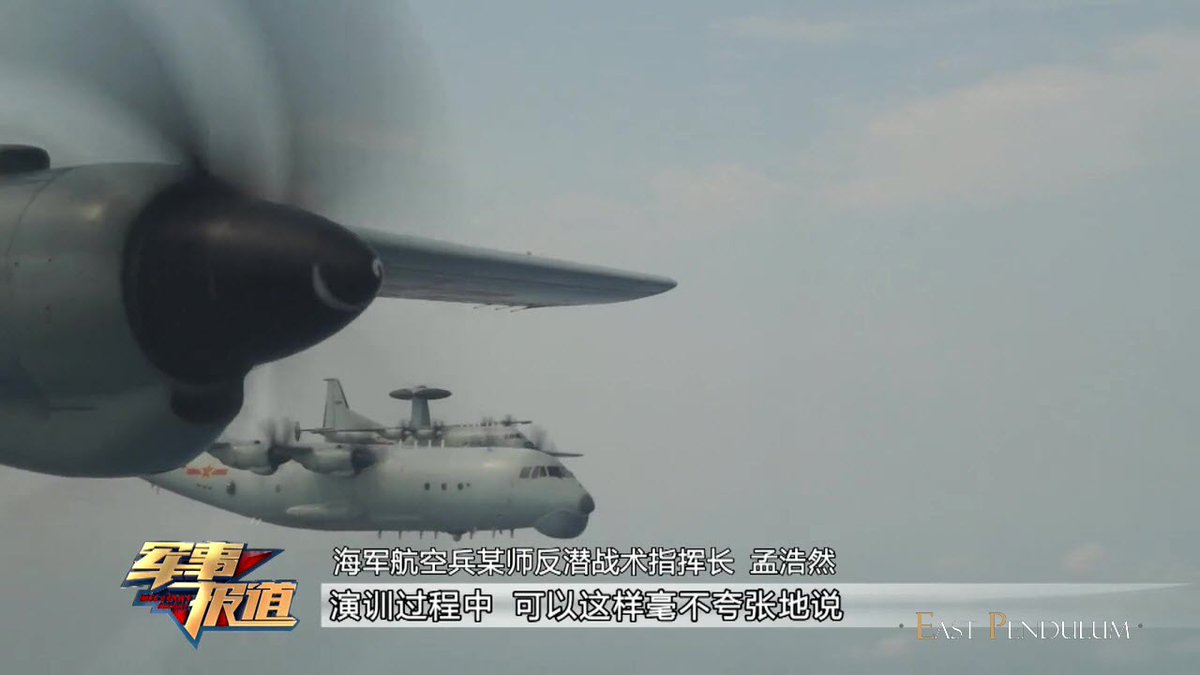 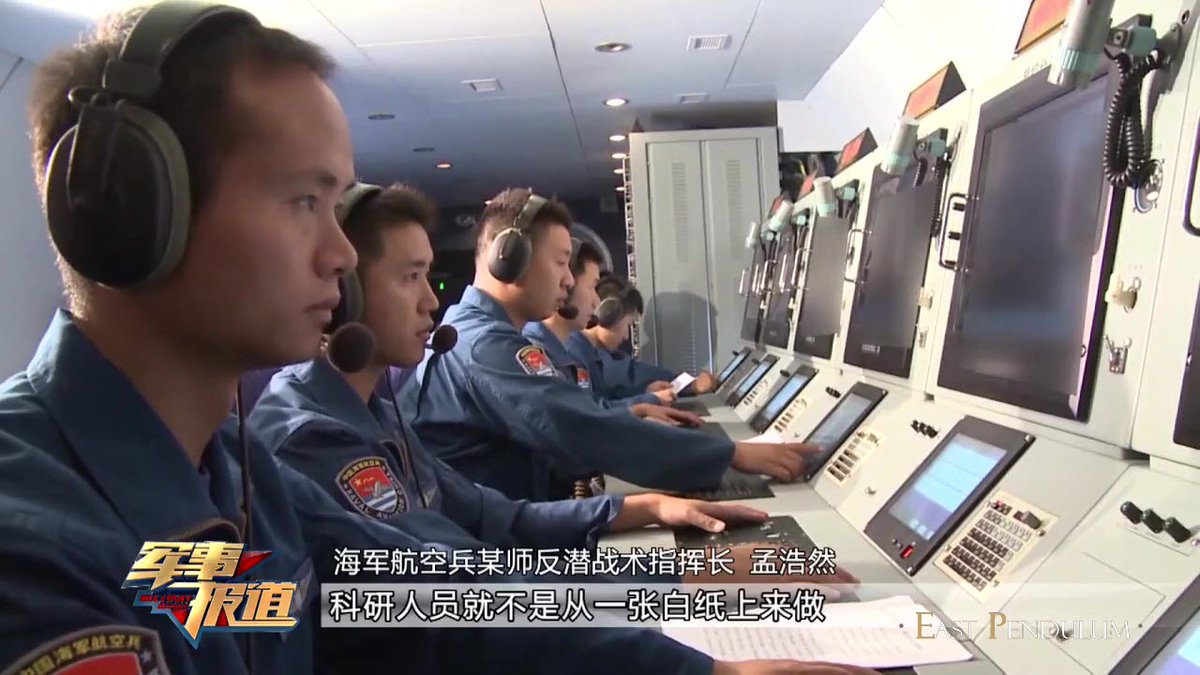 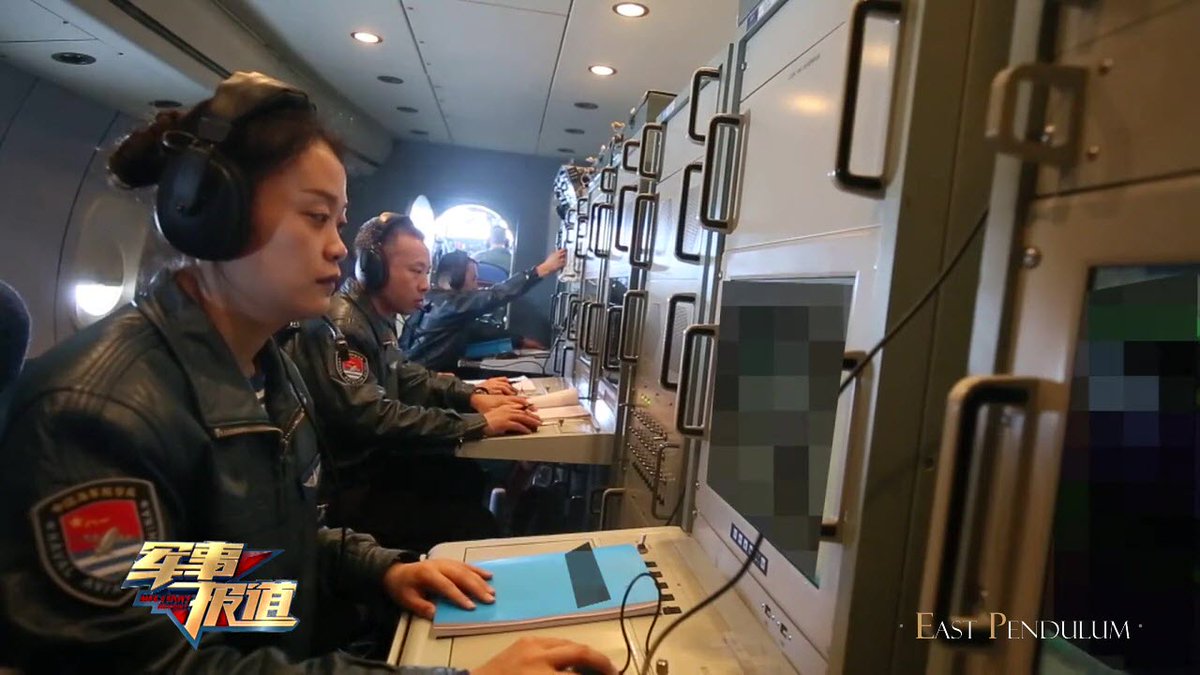 That is a nice looking aircraft

Please, Log in or Register to view URLs content!
A new protocol salvages valuable data if one autonomous underwater vehicle fails in a fleet The ocean’s depths have long remained mysterious—a dark abyss where few humans go. But we still have a stake in this alien environment; scientists want to know where pockets of pollution are worst, and where earthquakes occur along the sea floor. Passive sensors can collect such data, but transmitting it in this murky environment is a challenge.

Photo: Guangjie Han
The launching of the “C-shark” autonomous underwater vehicle in the East China Sea.

Each sensor, referred to as a node, sits stationary while it collects data. Meanwhile, a fleet of AUVs is dispatched across the network on a predetermined trajectory to collect data from each node.

Radio waves are absorbed by water, so underwater sensors and vehicles typically transmit and receive information by using acoustic signals. But sound waves cannot travel as fast or as far in water as radio waves can in the air.

And with more AUVs comes more challenges. “Particularly, it is difficult to communicate directly and synchronize the information among AUVs, due to the poor quality of underwater acoustic communication and short communication range,” Han says.

What’s more, nodes that are not close to the projected path of an AUV must relay their data to other nodes that will be close enough to an AUV to transmit it. This creates “hot regions” in the network, where some nodes are overburdened and may run out of energy and die. As Han says, “After some nodes in a hot region die, a node near the hot region may not be able to find a neighbor node to communicate [with], resulting in the data loss.”

In the new proposed approach, called HAMA (High-Availability data collection scheme based on Multi-AUVs), AUVs are able to adjust their trajectories to alleviate the hot region problem. As well, HAMA has a malfunction discovery and repair mechanism, to avoid data loss when some AUVs malfunction. If a node trying to send its data to an AUV discovers that the AUV has failed, it uses a multi-hop communication approach to inform the other nodes. Functioning AUVs then take the place of the broken-down AUV in collecting data. The researchers tested their approach in a number of simulations. Han says, “The simulation results show that, compared with the other algorithms or schemes, by adopting HAMA, the network lifetime is prolonged, the energy consumption of the nodes is reduced and balanced, and the packet delivery ratio is increased.”

Although this approach does have many advantages, it also results in a greater delay time for the information to be received, compared to the other approaches in this study. This could be problematic at times when it’s important to have updated information—say, if an underwater volcano is erupting. Han and his team plan to address this issue in future work.

Underwater vehicles, diving robots, and detectors require their own energy supply to operate for long periods independent of ships. A new, inexpensive system for the direct electrochemical extraction of energy from seawater offers the advantage of also being able to handle short spikes in power demand, while maintaining longer term steady power. To do so, the system can autonomously switch between two modes of operation, as researchers report in the journal Angewandte Chemie.

Charting submarine landforms, currents, and temperatures, and inspecting and repairing pipelines and deep-sea cables are just a few examples of tasks carried out autonomously by underwater devices in the depths of the ocean. Under these extreme conditions, the challenge for power generators is to produce both a high energy density (long run time with basic power use) and high power density (short-term high current flow) for activities such as rapid movement or action of a gripper.

Liang Tang, Hu Jiang, and Ming Hu and their team from the East China Normal University in Shanghai, Shanghai University, and the Chinese Research Academy of Environmental Sciences in Beijing, China, have taken inspiration from marine organisms that can switch their cell respiration between aerobic and anaerobic modes by using different materials as electron acceptors. The researchers have designed a new power generator that works by the same principles.

The key to the discovery is a cathode made of Prussian blue, an open framework structure with cyanide ions as "struts" and iron ions as "nodes", which can easily accept and release electrons. When combined with a metal anode, this structure can be used to generate electricity from seawater.

If the power demand is small, the electrons flowing into the cathode are transferred directly to dissolved oxygen. Because dissolved oxygen in seawater is inexhaustible, power at low current can theoretically be provided for an unlimited time. However, the concentration of dissolved oxygen is low. When the power demand, and thus current, are sharply increased, there is not enough oxygen at the cathode to immediately take up all of the incoming electrons. The Prussian blue must therefore store these electrons by reducing the oxidation state of the iron atoms from +3 to +2. To maintain a charge balance, positively charged sodium ions lodge within the framework. Because these are present in high concentration in seawater, many sodium ions--and therefore many electrons--can be absorbed in a short time. When the current demand slows down, electrons are transferred to oxygen once again, oxygen regenerates the framework, Fe(2+) is oxidized to Fe(3+), and the sodium ions depart.

This new system is very stable in corrosive seawater and can withstand numerous mode switches. It ran continuously for four days in its high-energy mode without losing power. The high-power mode was able to supply 39 light-emitting diodes and a propeller.

That one is a dead ringer for the Russian Klavesin-1R:

Yeah look similar how China get access to this drone Anyway here is write up about Klavesin 2R but his one has puny sail and long 6.5 m So it bigger variant of 1R

Klavesin is a creation of Rubin design bureau and ИПМТ ДВО РАН, Владивосток. The parameters of this underwater drone include: 6.5m length, 1m in diameter, 3700 kg weight, 50km range with a 2000 meter diving depth. This drone was also shown in the video being launched by Belgorod. The drone program is so super secret that some of the details regarding the vehicle could be found from Rubin’s
Please, Log in or Register to view URLs content!
seeking a company to insure two of these drones for 48 million rubles. Seems they already have two of them, for Belgorod and another GUGI submarine that is already operational, BS-64 Podmoskovye.

The 2R is, as one might suspect, a further evolution of the 1R variant, designed for oceanographic mapping, research, undersea photography, and probably some covert missions. Not much to add to this project except to say that it undoubtedly helps conduct undersea intelligence and reconnaissance missions for GUGI.

Via Grandy It is written by Ninie Chan but here she is only reporting the news from China Shipbuilding Industry Corporation (CSIC). I didn't know that Beidou can send and receive signal to and from underwater. Interesting part is this
Beijing-based naval specialist Li Jie said the advances would help Chinese submarines and underwater drones improve their ability to track other vessels and mount precision stealth strikes
“Precision and communication are the two most important elements for submarines and underwater drones,” Li said. 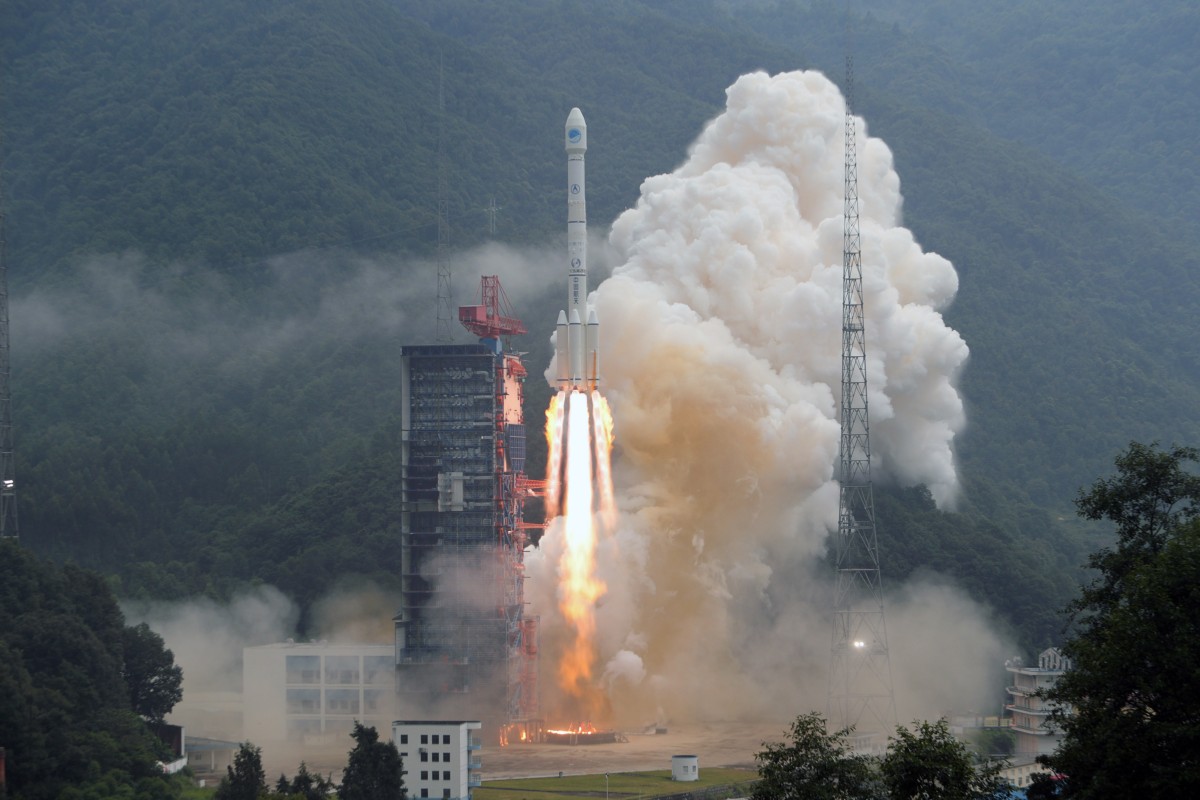 Tests have confirmed advances in the maritime use of China’s home-grown satellite navigation system, gains that could strengthen the ability of the country’s submarines and underwater drones to mount stealth strikes, military specialists said.

China Shipbuilding Industry Corporation (CSIC) said underwater precision positioning tests conducted by its No 716 Research and Development Institute in waters off Lianyungang in Jiangsu province, proved that it had overcome a number of core technical problems with the BeiDou Navigation Satellite System.

CSIC, China’s biggest state-owned naval shipbuilder, said the tests showed that the BeiDou system could not only provide accurate and consistent positioning data to underwater vessels, but could also send tracking and positioning information from underwater devices to shore-based and surface stations.

“The tests were meant to comprehensively test the BeiDou system’s capacity to deal with the complex sea environment,” CSIC said, adding that the system’s positioning accuracy and ranges were better than expected.

But the company did not specify the depths and ranges of the tests.

“Precision and communication are the two most important elements for submarines and underwater drones,” Li said.

“If the underwater BeiDou system can provide accurate positioning information and support communication between submarines and drones and land-based stations it would be a big strategic achievement for the Chinese navy – they will have finally built an independent global navigation system.”

Improvements to the BeiDou system could help China in Arctic exploration. Photo: Xinhua

The tests are understood to be part of Beijing’s plan to turn the BeiDou system into a global geolocation network, covering land and sea by 2020.

State news agency Xinhua reported last week that China had 35 satellites in orbit as part of the system to provide accurate positioning and navigation services to users around the world.

Beijing-based military expert Zhou Chenming said the underwater BeiDou system could be for both military and civilian uses, including guiding artificial intelligence drones sent up to 3,000 metres below the surface of the South China Sea and other waters.

“AI drones are cheaper to deploy than submarines, but they’re still very expensive, with one drone costing up to 50 million yuan (US$7.2 million). Underwater navigation in deep seas is also much more challenging than in the space,” Zhou said, adding that one of the drones was picked up by Vietnamese fishermen off the coast of Phu Yen province in south-central Vietnam in December.

“If the underwater BeiDou system can provide stable communication links with shore-based centres and surface command ships, then it would help China do underwater geological surveys,” Zhou said.

Hendrik_2000 said:
Beijing-based military expert Zhou Chenming said the underwater BeiDou system could be for both military and civilian uses, including guiding artificial intelligence drones sent up to 3,000 metres below the surface of the South China Sea and other waters.
Click to expand...

All Chinese source I can find for the 716 Institute statements are all garbages translated from this SCMP report. Only source I found that remotely related is
Please, Log in or Register to view URLs content!
that talks about a completely different system using Beidou as a metaphor, one that does not involve satellites.

How did the fact that a VLF transmitter is larger than the International Space Station escape Minnie Chan? and who is this Zhou Chenming? All I can find in Chinese is translated reports from SCMP.
You must log in or register to reply here.
Share:
Facebook Twitter Reddit Pinterest Tumblr WhatsApp Email Link
Top