VIP Professional
Good thing we resolved that image quickly. It'd be very unlikely PLAN would ever release images of the missile at this stage. And it'd be equally unlikely any third party would get to be so close to the test.

Anyway, JL-2 seems to have had some 15 years of testing at sea, before being ready for service. Now, JL-3 will most likely leverage much of that research and development time will be shorter, but we may still be looking at 5-10 years before missile is ready, from the first at-sea test. If indeed the first test was carried out in 2018, that means 2023 to 2028 timeframe...
Z

Registered Member
Makes sense for the missile to be ready around the time of its carrier submarine, Type 09-VI.
T

Wu Qian said that according to the consensus reached by the armed forces of China, Russia and Iran, the joint China-Russia-Iranian maritime exercise will be held in the Gulf of Oman from December 27th to 30th. The Chinese Navy sent the Xining guided missile destroyer to participate. The exercise aims to deepen the exchanges and cooperation between the navies of the three countries, and to demonstrate the good will and ability of the three parties to jointly maintain world peace and maritime security and actively build a "Marine Community of Destiny".

somehow didn't realize until now it was so busy year (found this chart inside
Please, Log in or Register to view URLs content!
): 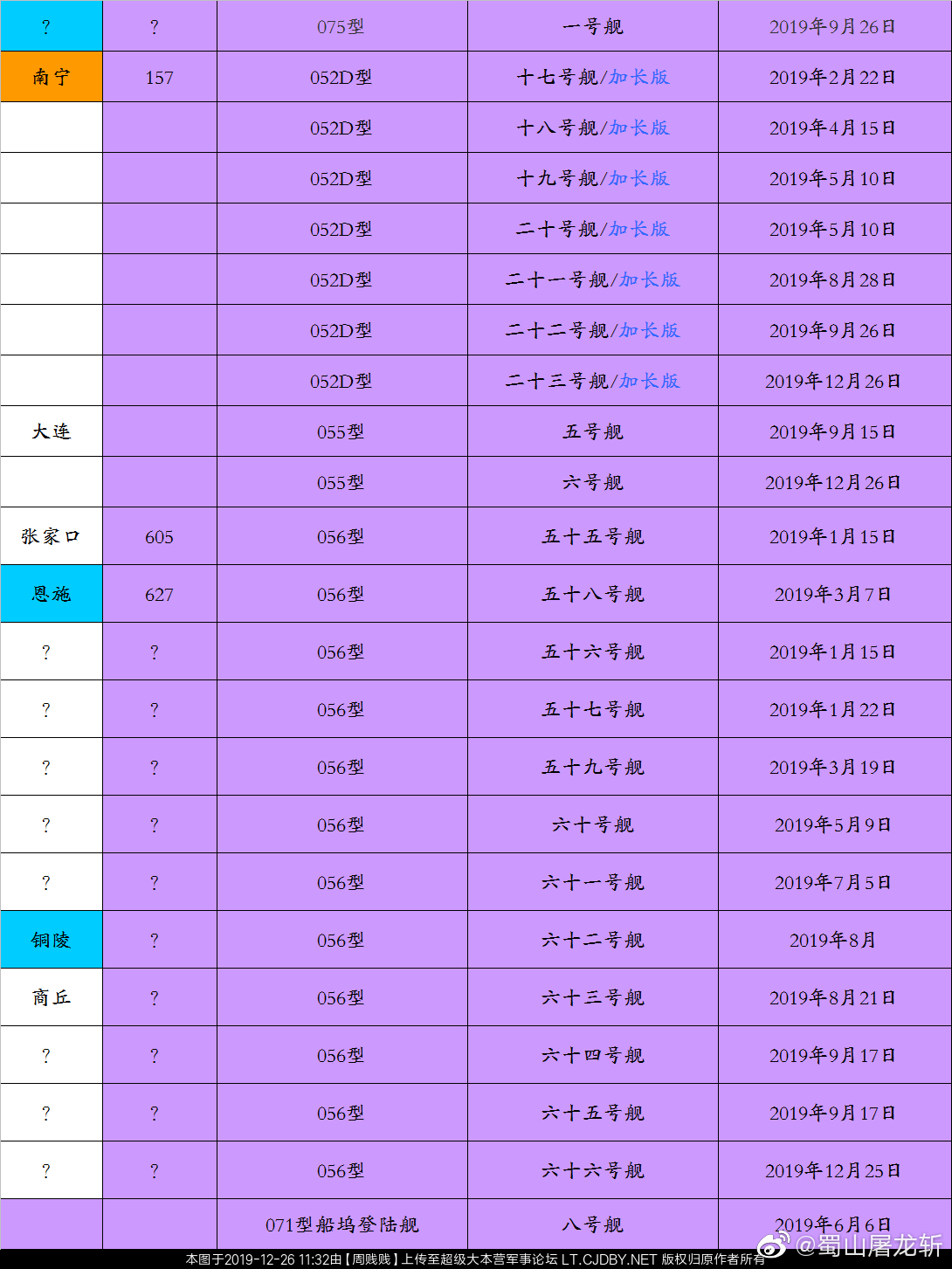 can someone follow that troll Henri who writes in French to post here a updated 2019 launch calendar, I guess he has his rare uses

As the end of 2019 approaches, it’s time to do a year-end review of the Chinese People's Liberation Army (PLA). 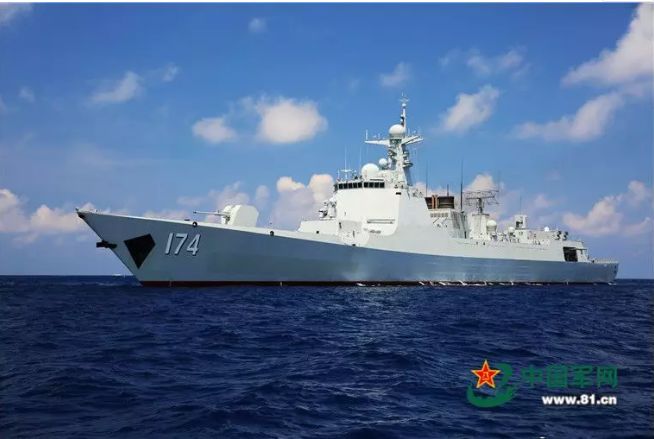 The service center is mainly responsible for helping veterans find jobs or start businesses, providing preferential treatment and assistance, as well as arranging visits for ex-servicemen.


A naval parade commemorating the 70th founding anniversary of the Chinese People's Liberation Army (PLA) Navy was held in Qingdao and nearby sea areas and airspace.

Nearly 20 foreign vessels from over 10 countries also participated in the parade, including Russia, Thailand, Vietnam and India.

The Chinese military started recruiting "civilian personnel" as part of efforts to attract more talent. Seventy-eight cities from 31 provinces held examinations simultaneously. The PLA planned to recruit over 19,000 civilian personnel, while 363,000 people registered for the exams. 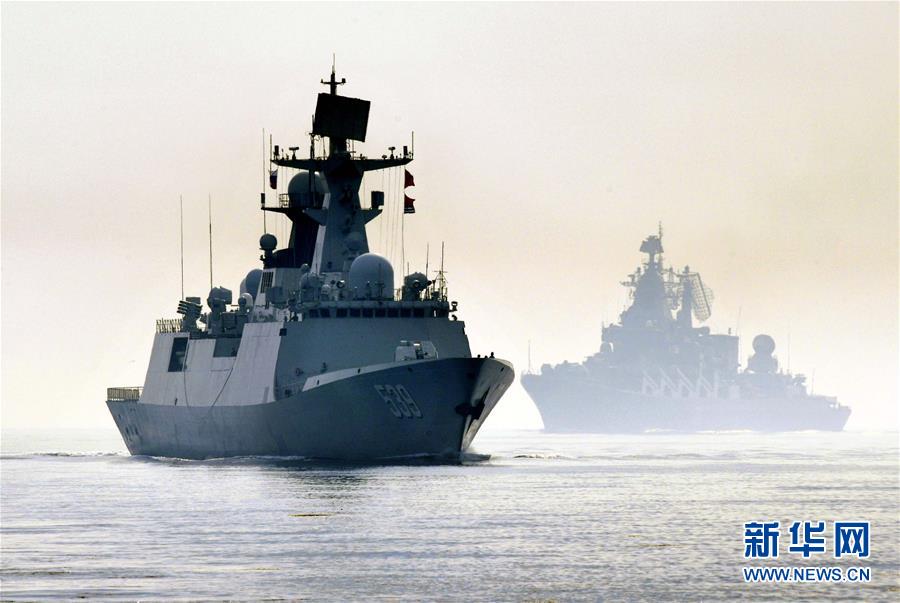 Chinese and Russian navies conducted a six-day joint naval exercise in Qingdao, in an attempt to reinforce the China-Russia comprehensive strategic partnership of coordination, deepen friendly and pragmatic cooperation between the Chinese and Russian militaries, and enhance both navies’ capability to jointly respond to security threats at sea. The 1st echelon of 205 Chinese peacekeeping officers and soldiers to Mali returned home by air after completing the peacekeeping mission assigned by the United Nations. It was the first time China had sent aircraft to bring peacekeepers back home from Mali.

A bus carrying over 40 Chinese nationals had a serious accident in northern Laos. The Chinese People's Liberation Army (PLA)'s Z-8G rescue helicopter participating in the "Peace Train-2019" China-Laos humanitarian and medical joint rescue exercise quickly responded, and successfully transferred rescue teams and the injured. It marked the official operation of the aircraft in actual combat.

The first amphibious assault ship of the Chinese People's Liberation Army (PLA) Navy was launched in Shanghai. With a strong capacity in amphibious operations and ability to carry out a variety of tasks, the ship was independently developed by China.

A military parade was held in celebration of the 70th anniversary of the founding of the People's Republic of China at Tian'anmen Square in Beijing. Chinese President Xi Jinping, also general secretary of the Communist Party of China (CPC) Central Committee and chairman of the Central Military Commission, reviewed the armed forces and delivered an important speech. The historic parade consisted of 15,000 personnel, 580 pieces of armament and more than 160 aircraft in 15 foot formations, 32 armament formations and 12 echelons.

The 7th Military World Games were held in Wuhan, capital of central China’s Hubei province. It featured over 9,300 military personnel from 109 nations. Seven world records and 85 games' records were broken. By the end of the games, China topped the medal table with 239 medals, including 133 golds, 64 silvers and 42 bronzes.

China's J-20 stealth fighter jets were commissioned into an elite unit of the Chinese PLA air force. With the commissioning of a series of newly developed aircraft such as jet fighters J-10B/C, J-16, and J-20, heavy transport aircraft Y-20, bombers H-6K, and airborne early warning and control aircraft KJ-500, the air force has preliminarily formed a complete structure in which the fourth generation of equipment serves as the backbone and the third generation of equipment as the mainstay.

China’s second aircraft carrier passed through the Taiwan Strait to conduct scientific research tests and routine training in relevant waters of the South China Sea. The organization of the cross-regional tests and training of the homemade aircraft carrier was a normal arrangement in the process of aircraft carrier construction, was not aimed at any specific target and had nothing to do with the current situation.

China’s first domestically built aircraft carrier, named after Shandong province in east China, was delivered to the PLA Navy and put into active service. Chinese President Xi Jinping, also general secretary of the Communist Party of China Central Committee and chairman of the Central Military Commission (CMC), attended the commissioning ceremony. Approved by the CMC, the Shandong was given the hull number 17.

In 2020, the PLA will continue garnering honors with loyalty and sweat.

Jura said:
somehow didn't realize until now it was so busy year (found this chart inside
Please, Log in or Register to view URLs content!
): 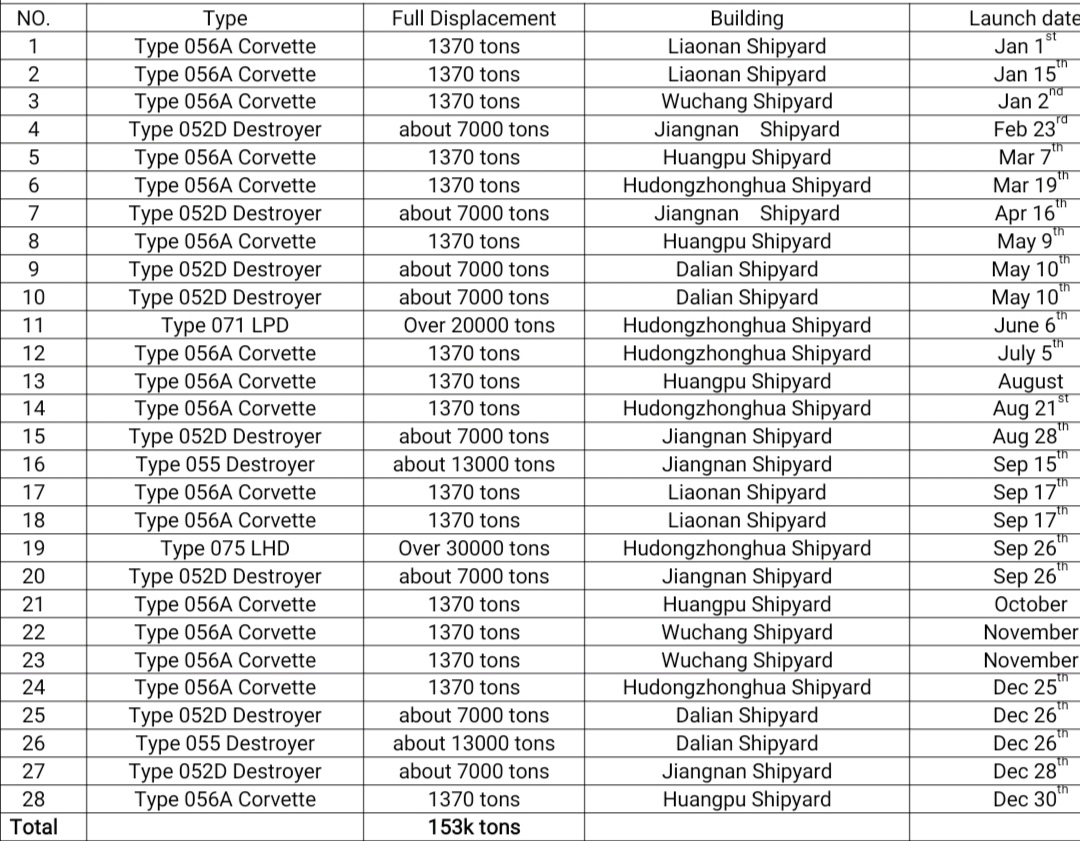 Registered Member
It would be really useful now to get some sat imagery from Jiangnan, Dalian to see if there's any newer pre assembled sections being readied in the staging area...
As far as numbers from rumours and state outlets and related people are concerned, the production of surface ships is to slow down considerably if no more orders are present.
Launched/expected
Type 056 - 70/60
Type 054a - 30/30
Type 052d- 24/26
Type 055 - 06/08(12?)
Again, these numbers aren't a wall.
You must log in or register to reply here.
Share:
Facebook Twitter Reddit Pinterest Tumblr WhatsApp Email Link
Top