Tam said:
They all use towed array sonar. Later after the first block, the second block and subsequent ones added a variable depth sonar. So from one to two towed arrays.
Click to expand...

Did PLAN retrofit the VDS to the first block? That sounds like a perfectly reasonable thing to do for me.

p.s. Can you explain why the Sino-SURTASS towed sonar isn't being used on the frontline vessels? I'm pretty curious about that one.
T

TheObserver said:
Did PLAN retrofit the VDS to the first block? That sounds like a perfectly reasonable thing to do for me.

p.s. Can you explain why the Sino-SURTASS towed sonar isn't being used on the frontline vessels? I'm pretty curious about that one.
Click to expand...

First four ships are identified by unbroken bezel from the point of the bow to the root of the superstructure with a flared bow. Has Type 730 CIWS and used SMT Pielstik engines.

No. 5 to No. 16 now has the bezel and the bow restored to the original 054 style and used domestic engines.

These ships have the Type 206 towed array sonar.

Starting from the 17th ship, the Type 311 VDS or Variable Depth Sonar is added to the ship. Unlike other TAS/VDS systems where the towed array and variable depth sonar array are placed on the same single line, the Type 206 and Type 311 has separate lines and winches on their own. The Type 206 TAS uses a small rectangular port, while the Type 311 VDS has a much larger port door that opens. As the 17th ship and above also has the Type 1130 CIWS, so a 054A that you can spot with a Type 1130 CIWS should have the VDS also.

The SURTASS sonar, which I think is called the Type 208 has a much larger reel and winch which can't be incorporated on an existing warship but on a dedicated ship on its own. The array might be bigger, too big that it requires a dedicated ship. Large array sizes and much longer line lengths, which allows the sonar to be deployed much farther from the ship, less noise from the ship, are there for long range, low frequency detection, while the smaller VDS, like you see on the Type 054A, is for medium frequency, medium range. The range of detection should be way greater on the SURTASS vessel. Both Type 206 TAS and 311 VDS are standard fit on the 052D and 056A, while the 052C has the 206 TAS.

The better analogy would be to compare the radar of a fighter vs. the radar for an AEW aircraft.

The bigger the buoy like thing the VDS drops, the lower the frequency and the longer the range.

The ships have a third line which is a towed sonar decoy for antitorpedo. This also takes the form of a small rectangular port. A ship that has two small rectangular ports on the transom would have both TD and TAS, but if there is also a door opening, that would be the VDS. So it goes like:

It appears the 053H2G has the TAS or TLAS added. The 053H3 refit may have added both TAS and VDS.

The major refit of the two Type 052 destroyers saw them having both the TAS and VDS retrofitted. This can mean while the current 1 to 16 Type 054A doesn't have the VDS, it remains an option in the future during a major midlife refit.

It is possible the recent 054 refit may have added both TAS and VDS but I want to see a good view of the rear or transom. Need a good quality open source photo of the two ships.

Helicopter dipping sonar is small. Its greater for attacking but not as great as detecting like SURTASS ships that carry huge sonars.

Type 056, 056A, 054, 054A, 052C and 052D all use the same bow sonar which performs well, but its not as big as those in the Burke or Russian Udaloy ships. The 055 does have a new huge bow sonar, probably what China used to experiment with. But after refit, the TAS was removed. This has something to do with the ship's noisy steam engines which makes the TAS less efficient. On the other hand the 051B does have two helicopters.

While the 052 refit in 2011 still gives it so and so air defenses and radar, the two ships got an enormous jump in their ASW capability with towed sonar and VDS, and you have two helicopters to boot. So these two old destroyers still have more use than most people think. So with all the 053H3 refits, they most probably have TAS/VDS already. Their large windows at the transom makes it easy to include those equipment.

How the PLA Navy Might Use Autonomous Undersea Vehicles

While China’s AUV fleet still primarily consists of early-stage research experiments and prototypes, scientific research papers and theoretical writings by the PLA Navy (PLAN) indicate that it is primarily interested in using AUVs for marine surveying and reconnaissance, mine warfare and countermeasures, undersea cable inspection, and anti-submarine warfare. Each of these applications rely on different AUV models, and carry distinct implications and risks for the U.S. Navy and its partners in the Indo-Pacific.

The PLAN’s most mature application of AUVs is in marine surveying and reconnaissance. Chinese and American analysts have long assessed that the United States would retain a significant undersea advantage in a Taiwan Strait contingency, and the PLAN has rapidly expanded its
Please, Log in or Register to view URLs content!
force to compensate for this disadvantage. As early as 2013, the PLA commissioned construction of the
Please, Log in or Register to view URLs content!
(水下长城), a network of hydrosonic sensors deployed at depths of 2,000 meters, which are designed to detect adversary undersea vehicles operating in the South China Sea. More recent research papers indicate that the PLAN may field groups of small and medium-sized AUVs for a similar purpose.
S

crash8pilot said:
Depending on the threat environment (enemy aircraft, ship, or SAM sites in the case of Taiwan and mobile littoral units the USMC are standing up to secure mobile islands for anti-air operations), fighters could provide air-escort to ASW air assets... The speed of a fighter coupled with the usage of FLIR could also help track a large area more quickly for plumes of heat submarines tend to generate, and then feed back the information up the loop to MPA/ASW helos/ships for precise targeting.
Click to expand...

There is no possibility for a fighter or any other vector to detect a submarine by the heat generated through FLIR.

At operational depths below 100 meters, there is no possibility of a submarine being detected via FLIR.

The pressurized water in the reactor will be warmer than ocean water and radioactive traces even if residual would be located, but they would only serve to find out if there are submarines in the area, there is no possibility of giving a precise direction to attack a submarine.

Ultimately, passive or active sonar has to be used. As for heat, it doesn't really matter at ASW. Infrared radiation does not propagate in water, only a few meters, and the heated water discharged is easily diluted in ocean water.

Were it that relevant, anti-submarine torpedoes would have the same thermal seeker as an air-to-air missile, and they don't. Regarding non-acoustic sensors for detecting submarines, the only one that really has any practical use is MAD and in the 1980s there was the promise of such a “blue-green laser”, which could penetrate hundreds of meters into water.

Eventually following the path of a nuclear submarine using Russian SOKS may work, but without predictability. But it's a system where a submarine would be on the glue of another submarine that would be radiating heat, and the SOKS would be used to follow the submarine's trail.

About 70% of the output heat of a reactor is dissipated into seawater almost immediately, but the rest leaves a thermal wake, a cloud of less dense hot water forms and rises to the sea surface and creates a thermal trail that can be detected via FLIR, even at operational depth, although the trail shrinks as the submarine increases in depth and decreases in speed, but there is still a chance of detecting the trail of a submarine, however small.

Although in this condition of observing the thermal trail, the most capable ASW option is precisely a SOKS system like those of the Victor class that tracked and chased for several hours a Los Angeles class submarine in the late 1980s.

The right thing is a set capable of tracking the enemy submarine, that's why we have so many ASW resources available and the blue/green laser is just one more to add, although this resource was also used as a communication method, it seems that it will be even used for ASW employment as it is a new technology in development that uses penetrating light (blue/green) in water that can be used to detect submarines, although it is very difficult due to the direction of a laser.

Sino-SURTASS again, this time a close-up from the back. 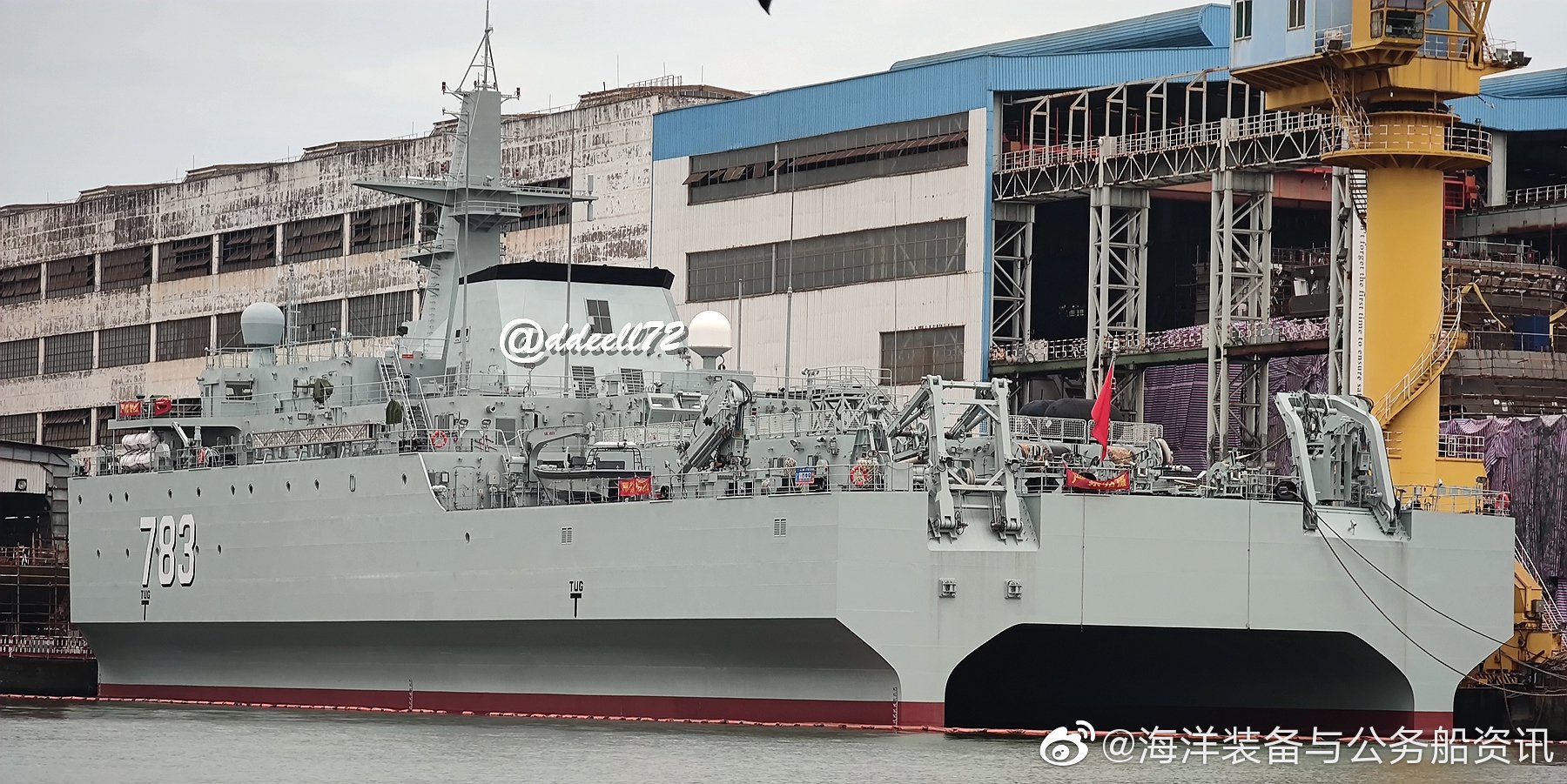 by78 said:
Sino-SURTASS again, this time a close-up from the back.

pardon my ignorance, but is IEP a must for this kind of ship, to keep the propulsion noise to the minimum ??

Jono said:
pardon my ignorance, but is IEP a must for this kind of ship, to keep the propulsion noise to the minimum ??
Click to expand...

Not really. It deploys a towed sonar array, which can trail the ship by several miles. This is done precisely to get away from the noises emanating from the ship.
T

Registered Member
It probably uses a pair of water jets. Usually water jet propulsion are powered by a pair of diesels.

There is such a thing as water jet propulsion via electric hybrid.

But these are usually done more as a green initiative rather than a military one. If this is used on the SURTASS it probably might be more for extended fuel economy with quietness as the collateral benefit.