Exactly that. When you do the shake-and-bake and have parts fall out...

Registered Member
Please, Log in or Register to view URLs content!
The plasma thrusters will be mounted on two satellites of Sputnix Company that will be launched into space under the Space PI program in 2022

MOSCOW, December 9. /TASS/. Russia has launched the trials of a plasma thruster for retaining the attitude of small space vehicles in orbit, the press office of Sitronics Group told TASS on Thursday.

"The staff of the plasma engine laboratory of the LaPlas Institute within the MEPhI National Research Nuclear University has launched trials jointly with representatives of the Sputnix Company (part of Sitronics Group) of Russia’s first plasma propulsion unit that can be mounted on small space vehicles," the press office noted.

The engine has been named VERA (Volume-Effective Rocket-propulsion Assembly). "The small size and weight of the thrusters that have been developed make it possible to retain a cluster of ten nanosatellites in orbit," the press office added.

With these thrusters mounted on CubeSat 3U satellites weighing no more than 4 kg, these space vehicles will be capable of retaining their orbital position or, upon the completion of their operation, lower the orbit’s altitude, cutting the time of burning up in the dense layers of the atmosphere two-or three-fold. The orbit lowering maneuver after the end of the satellite’s operation will make it possible to cut the time of space junk existence, the press office specified.

These plasma thrusters will be mounted on two satellites of Sputnix Company that will be launched into space under the Space PI program in 2022.

Registered Member
NASA announced the extension of ISS operations until 2030:

The first is the budget impact. The ISS has been expensive to operate. It is roughly $4 billion per year: roughly 1/6th of NASA's current budget. That alone would pay for a couple SLS, allowing for two moon missions per year, or a large number of FalconHeavy rockets. In addition, this cuts the possibility of a NASA Mars mission in the 2030s to almost zero unless there is a major plus up. Given Congress' reaction to adding the money for the lunar landers, I doubt that will happen.

The second reason is the increasing issues between America and Russia. The two have kept their space relationship as far as the ISS, etc. in great shape, whatever else may be happening. However, within the last year or two, even the ISS/manned space flight cooperation has become more and more strained. There are several reasons. Russia is really unhappy with SpaceX (challenging their revenue through access to ISS and the launch customers shifting more to SpaceX than the Soyuz), US sanctions, the situation in Ukraine, and US reactions to anything Russian these days. The US is really unhappy with the asat test, the stupid accusation the American astronaut drilled a hole in the Soyuz capsule[1], and the reverse of the above save spacex. There's a WaPo article, but it is more "ooooo, Russia bad" rather than actually helpful in how cooperation has deteriorated.

Additionally, there is the issue the Russians themselves see their space industry rotting from within:

I don't care what country this came from, that's an awesome view. I am sure China will have shots like this soon. http://spaceref.com/mars/mars-curiosity-sol-3319-shoot-the-gap.html
www.sinodefenceforum.com

What will the Russian space industry look like in 2030?

Finally, Russia is signally its preference to shift cooperation in space to China. The two have signed an agreement on lunar and other space exploration. Cynical me wonders if extended the ISS to 2030 is a way to soak up Russian space funds and prevent the Russians from going to the Moon with the Chinese.

1. Really? I mean the ISS is not vast and no one would have heard the drilling or caught her? Space capsules are far tougher than sheet metal.

anzha said:
1. Really? I mean the ISS is not vast and no one would have heard the drilling or caught her? Space capsules are far tougher than sheet metal
Click to expand...

More likely Roscosmos are just trying to Scapegoat. Blame their own QC problems on a foreign astronaut.
G

Registered Member
Roscosmos claims the leak only happened in space after it was docked to the ISS.
A

gelgoog said:
Roscosmos claims the leak only happened in space after it was docked to the ISS.
Click to expand...

That does appear to be true. 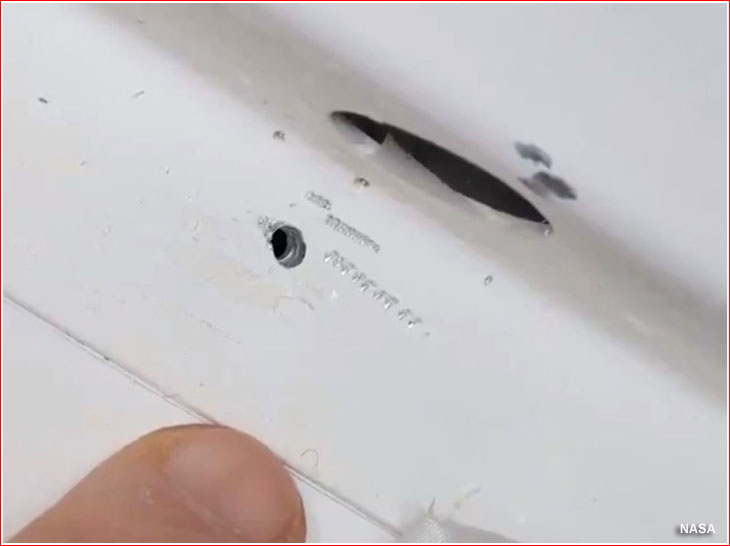 Alexander Gerst first discovered the leak on the wall behind the toilet unit and used his finger to initially plug it. (According to US sources, the second hole was found to be internal and not breaching the hull, while Russian sources later reported the existence of only one crack.)
Click to expand...

Please, Log in or Register to view URLs content!
So an American astronaut is going to go into the Russian segment, remove the toilet, drill a hole and then replace the toilet while in orbit...and not get caught while doing it?
A

Registered Member
A bit of a review of Russian space accomplishments in 2020: