Staff member
Super Moderator
Registered Member
Hi guys, me again with a unique question concerning the Mi-17/-171 in China and I just wanted to start this chapter as:

...Anyway, the exact background and status of the whole Chinese Mi-17/-171 purchase is still far from clear and depending sources, the information vary in regard the numbers acquired, the variants purchased, the dates and numbers of orders and even if the often mentioned licenced production line ever materialised.
...
Click to expand...

So far IMO the most reliable source is surely Huitong's Blog and this interesting site, that is already long gone:

In essence I'm surprised that this often mentioned licence and even more this "Sichuan Lantian Helicopter Company" is mentioned quite often, but nothing is confirmed or even completely unknown to me. Their site is off-line everywhere (
Please, Log in or Register to view URLs content!
) and

....
In May 2008 licensed production of the Mi-17 started in China, with production being led by Mil Moscow Helicopter Plant JSC and the Sichuan Lantian Helicopter Company Limited (
Please, Log in or Register to view URLs content!
)
in Chengdu, Sichuan province. The plant built 20 helicopters in 2008, using Russian Ulan-Ude-supplied kits; production is expected to reach 80 helicopters per year eventually. The variants to be built by Lantian will include Mi-171, Mi-17V-5, and Mi-17V7.
Click to expand...

.... The first two Chinese-assembled Mi-171s (B-7833 and '7834) were delivered to Qingdao Helicopter Aviation Co on 16 December 2009.
... This seems to have been put on hold, as the Lantian Helicopter Company website is offline, and the entire enterprise is very poorly attested apart from the initial news reports.
...
Click to expand...

Any help from you guys?

Registered Member
These are interesting accounts and online information, but from what I've read, the Mi-17/171 fleet operated by the PLA are all from Russia?

The Russian media has a habit of talking about potential weapon deals involving China but they seldom become reality, at least often not soon enough as predicted.

This Wechat articles talks about the variants China operates and they seem to be exhaustive:

The "Sichuan Lantian Helicopter Company" sounds like a ruse to me. Maybe you can try Chinese databases of businesses for its information. There are ways for that kind of research.
J

The 四川蓝天直升机有限公司 was a short-lived joint venture between the Russians and the PLAAF 5701 Factory. Below is a signing ceremony between Qingdao Helicopter Ltd and Lantian for the purchase of five Chinese-assembled Mi-171s. 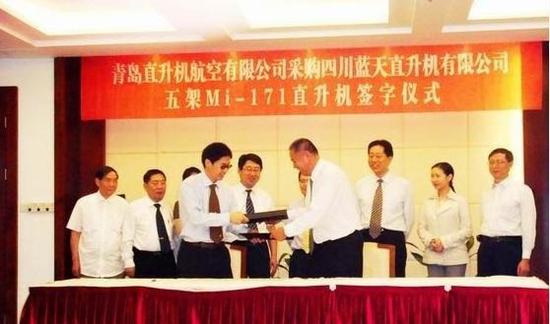 I don't know whether all five were delivered nor if anymore were ordered. What is clear, however, is Qingdao
Please, Log in or Register to view URLs content!
this year from Russia, meaning Lantian is most likely defunct.

According to
Please, Log in or Register to view URLs content!
, Lantian began assembling Mi-171s in 2009 but the PLA very quickly lost interest as the Mi-8 family was already outdated and wasn't worth the effort of fully indigenising. The Z-20 was also going to be the PLA's primary utility helicopter from 2020 onward so the PLA decided the resources that could be invested in the Mi-171's production could instead be spent on modernising the Z-8 family, resulting in today's Z-8G and Z-18.

The only mention of the production of 20 helicopters in 2008 came from
Please, Log in or Register to view URLs content!
which are prone to overoptimistic predictions. I seriously doubt Lantian started assembly in 2008 nor did they ever deliver 20 helicopters.

Staff member
Super Moderator
Registered Member
Thanks a lot to all of you.
D

The Mi-171 Helicopter with the VK-2500-03 Engine Certified in China
Fighting fire and transporting cargo at an altitude of up to 3,300 meters, the Mi-171 helicopters with VK-2500-03 engines demonstrated its key advantages, such as the thrust-to-weight ratio and safety of operation in the mountains 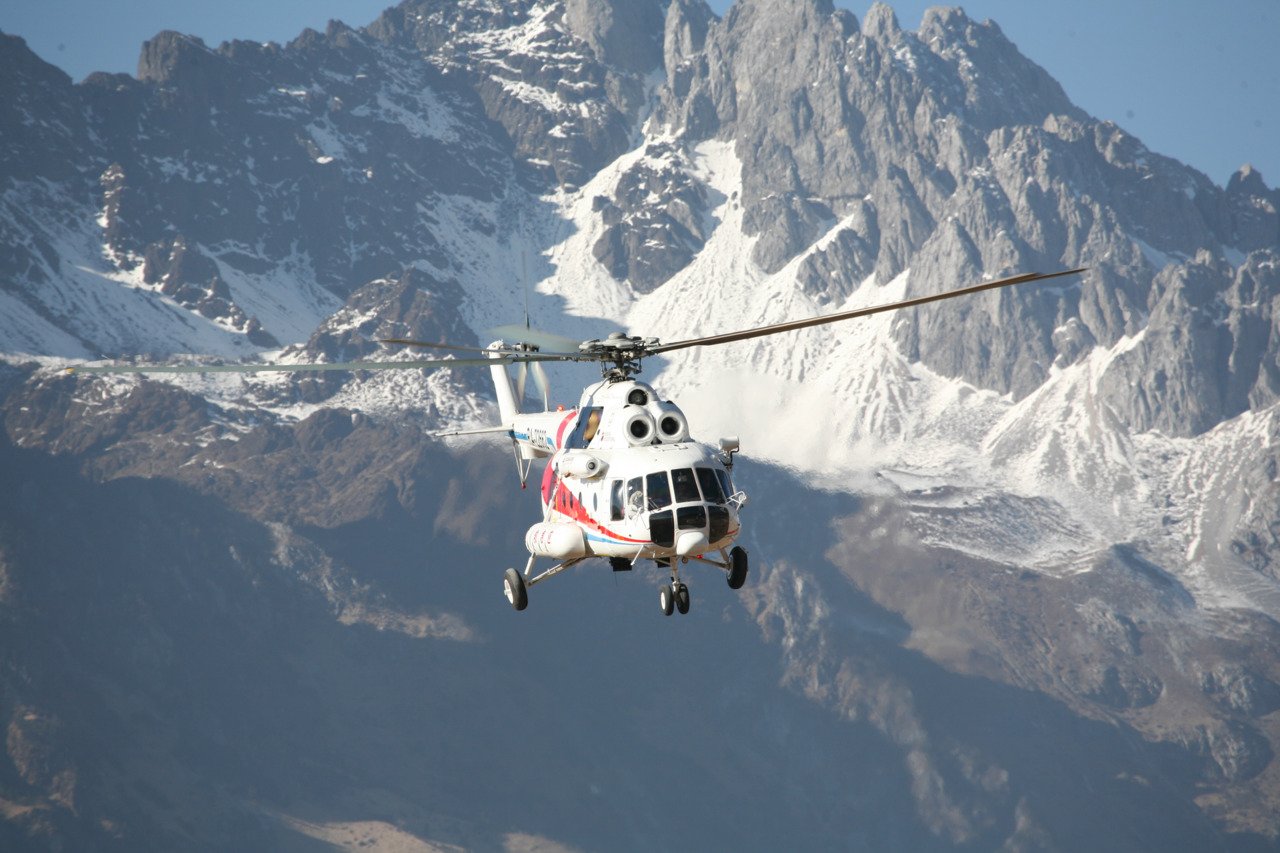 The Civil Aviation Administration of China issued a national type certificate for the Mi-171 helicopter with VK-2500-03 engines. The decision of the Chinese authorities gives Russian Helicopters holding company (part of Rostec State Corporation) an opportunity to supply machines of this type to China.

"China has about 20 civilian Mi-8/17 helicopters, and we had previously noted several times that national operators are interested in the latest versions of this type. Cooperation of Rostec's holding companies made Mi-171 more attractive for business, having reduced the cost of its operation due to using new technologies," said Russian Helicopters CEO Andrey Boginsky.

In late 2018 Russian Helicopters made demonstration flights of Mi-171 with the VK-2500-03 engine in China. The heads of the Chinese Ministry of Emergency Management and the Civil Aviation Administration of China saw transport capabilities of the machine during cargo transportation on an external sling, fighting fire in high mountains and flights with a helicopter bucket.

"Helicopter construction is one of the key areas of cooperation between Rostec and our Chinese counterparts," said Viktor Kladov, Director for International Cooperation and Regional Policy Department of the State Corporation. "We are constantly working on expansion of cooperation areas in this industry – this includes machines supply, retrofitting, authorization and certification of existing and creation of new technical service centers, and, of course, our project with China to create AHL."

Fighting fire and transporting cargo at an altitude of up to 3,300 meters, the Mi-171 helicopters with VK-2500-03 engines demonstrated its key advantages, such as the thrust-to-weight ratio and safety of operation in the mountains, in the best possible way. During the demonstration flight, the helicopter carried three tons of cargo and nine passengers from the altitude of 2,600 meters to the altitude of 3,300 meters. The machine also showed how it takes 3,5 tons of water in the helicopter bucket at the altitude of 3,000 meters and then pours it in the center of the fire. Besides, on the ground, as part of a static show people saw unique capabilities of Mi-171 in terms of passengers and firemen quickly getting on and off the machine.

The certified Mi-171 helicopter with the VK-2500-03 engines was first presented at China International Aviation & Aerospace Exhibition held in Zhuhai.The VK-2500-03 engine designed and supplied by JSC“UEC-Klimov” is very powerful (compared to the TV3-117VM engine, series 02) in any flight mode and at any altitude due to heat-resistant materials and improved design. The introduction of the BARK-78 digital automatic control system makes it possible to run the engine more properly, ensures closer control over operations in all modes and makes the operation simpler. The use of VK-2500-03 engines in Mi-171 helicopters ensures higher load capacity and increases the absolute and static ceiling. Besides, greater available engine power in an emergency mode ensures greater safety during the flight with one running engine.

I don't see why not PLAAF requirement for helicopter is huge and beside Mi171 is cheap!

Hendrik_2000 said:
I don't see why not PLAAF requirement for helicopter is huge and beside Mi171 is cheap!
Click to expand...

The question is, are they for the PLA Army Aviation of PLAAF?

Me again with a PS ... does anyone know the original source or video of this report?