In any case it certainly isn't using PW100C or any other engine from a western nation.
Click to expand...

Deino said:
I must admit I already had the same "feeling" as if the claim "this is only a blurred CG" could be an attempt to avoid any serious consequences as long as the image is blurred enough.
Click to expand... 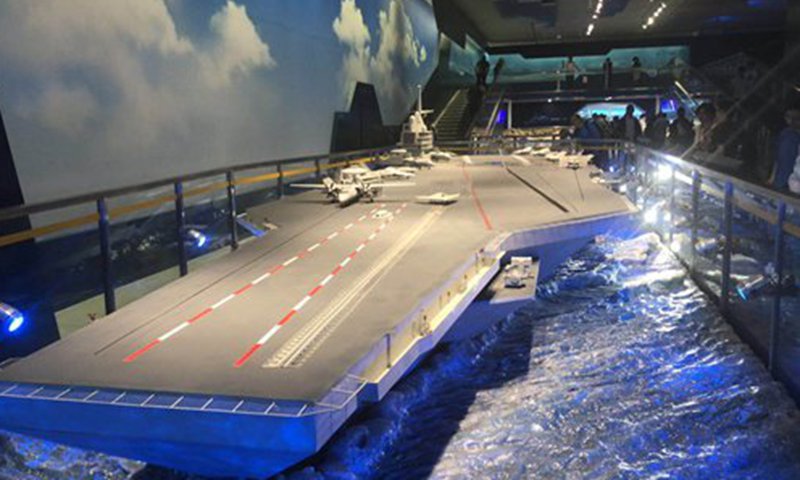 A future aircraft carrier function demonstration model is on display at the newly renovated and expanded Military Museum of the Chinese People's Revolution in Beijing on Sunday. Photo: Liu Xuanzun/GT

Registered Member
1. Does anyone have a link to the 'original' report?

2. This is pretty much confirming the previous idea that the picture was probably not CG, and was probably more CYA, right?
2

Edit, possibly just a mock up of a E2

@Intrepid me too, looking at the propellers should be six instead of eight?

Staff member
Super Moderator
Registered Member
IMO a real one ... a real mock up of a E-2D. Looks very much like a model or 1:1 replica made for game parks or whatever.
R

Deino said:
Well ... still not a clear image, but by far the best we have until today: An image showing the XAC KJ-600 carrierborne AEW prototype no. 60001 in flight.

(Image via @矩阵航空Acer31 from Weibo)

it is interesting the E-2’S outer vertical stabilizers joint with horizontal stabilizer above mid point, where as those of KJ joints below the midpoint,

On the E-2 the decision was driven by the desire to minimize the protruding height of the fins so the aircraft can more easily fit in for hangar storage. when the aircraft is parked the rotodome can also be lowered so the top is flush with the top of the Tail fin.

apparently on the KJ reduced the aircraft‘s parked height is less of a concern. So the failfin is allowed to stick up more. Why?

Two possibility comes to mind, and they are not muturally exclusive:

1. On the KJ, the greater concern if for more clearance under the tail, to prevent tail strike during take off of landing. The aircraft use arrested landing, so a nose high attitude at touch down is not important. So tail clearance for landing seems unlikely to be a major concern. That leaves concern for tail strike during take off. If the aircraft is catapult launched, it would not rotate until it it has left the deck, so again tail clearance during taking off seems unlikelt to be a major concern. That leaves take off on the bow ramp. Here tails\ strike would be a major concern. So the implication? The KJ is designed to operate from ski ramp.

2. The KJ is not meant to be hangared, and would be permanently deck parked. This seems unlikely, even if the KJ is normally deck parked, surely there can be time when it would be struck below for maintenance?

An E-2 does have a positive angle of attack on landing.