Registered Member
I heard the story was FC-31 project was almost canned, but was saved by the dramatic success of WS-19 engine which convinced whoever is in charge to continue to fund the project towards 3.0 with this new engine.
S

Temstar said:
I heard the story was FC-31 project was almost canned, but was saved by the dramatic success of WS-19 engine which convinced whoever is in charge to continue to fund the project towards 3.0 with this new engine.
Click to expand...

Will any other fighters use these engines? Like J10, J16 etc

I'd assume future J-10s and J-16s would use the latest WS-10s, although updating their design and fitting them with WS-15s does not sound outlandish either.

localizer said:
Any chance of a single WS-15 engine J35? Will dual WS-19 give supercruise?
Click to expand...

I don't see a single WS-15 J-35 happening. I would prefer that carrier fighters enjoy the benefit of the safety redundancy of having two engines.

I can see a separate project, a speculative but logical stealthier successor to the JF-17 being powered by the WS-15 or WS-19. But that's another story.
G

Tam said:
I don't see a single WS-15 J-35 happening. I would prefer that carrier fighters enjoy the benefit of the safety redundancy of having two engines.

I can see a separate project, a speculative but logical stealthier successor to the JF-17 being powered by the WS-15 or WS-19. But that's another story.
Click to expand...

Plus, if anyone has the F-35 in their minds... we all know the only/main reason it has 1 engine is because of the VTOL B variant and the folly of trying to build 3 (really just 2) stealth planes in 1 (or whatever the % parts commonality is).

I think the USN would have preferred to also enjoy that benefit, if they had it their way.
T

H2O said:
So the J-35 program is jointly funded by both the PLA-AF and PLA-N?
Click to expand...

Doesn't sound like so.
(3)There was no PLA funding when they made and tested the land-based variant. (2)The type number was given just two years ago, together with the funding. (1)The naval variant was built in two years. These points seem to imply that only naval variant was chosen by PLAN and received funding. Whatever was done before (2020-2=2018) by SAC is from their own wallet and PLAAF was and still not paying.

its perfect for carriers J20 not suitable
K

The only interesting bit is the red underlined part. It mentions full static test for a certain unnamed project. Could be J-XY.

An article on the electromagnetic compatibility requirements and optimization of engine controllers for the complex operating environment of carrier operations. The article is in Chinese, and a Google translation is posted below. Two of the authors are from 649 Institute (Guiyang Engine Design Institute), which is responsible for J-31/J-35's engines. 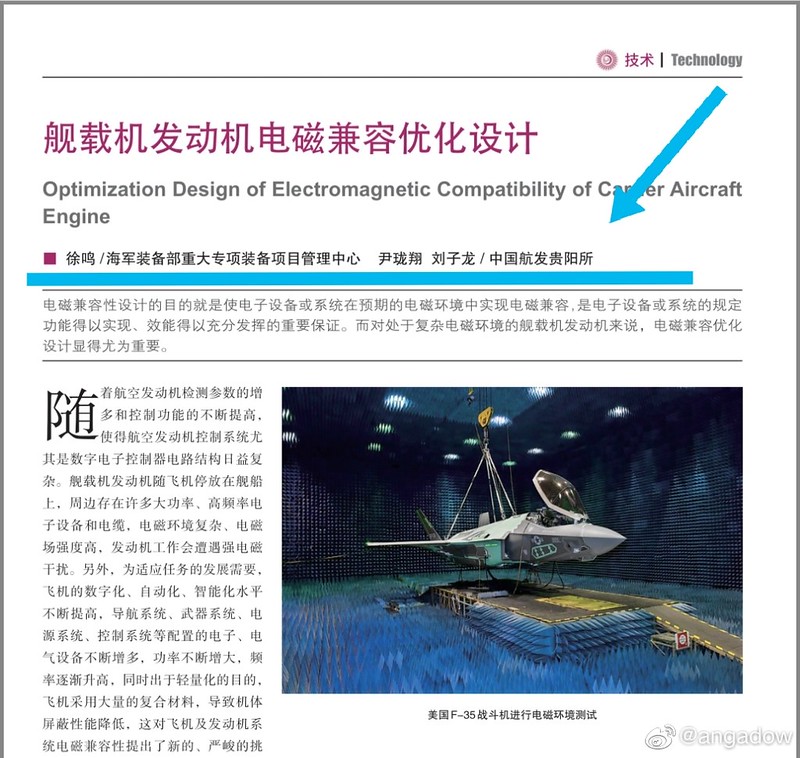 In order to take into account the thrust index requirements of carrier-based aircraft engines, lightweight design of control system components is required, which often results in a compact layout of the control system on the engine and dense wiring. Compared with other engines, the electromagnetic environment of carrier-based aircraft engines also includes natural interference sources, receivers, transmitters, antennas, etc. in the sea area. The combined effect of intentional threat electromagnetic environment and unintentional background electromagnetic environment. The electrical wiring design of the carrier-based aircraft engine needs to consider the coupling suppression of low-frequency and high-frequency cables and control the common mode current. In order to ensure that the electrical wiring of the ship-based engine meets the electromagnetic compatibility design requirements, the following principles should be followed when the electrical system design is carried out: Except for the switch value, the remaining wires should be twisted-pair or triple-pair shielded wires; the wire shielding layer should pass through the anti-wave sleeve Attached with shielded tail to ensure 360° shielding continuity; engine cable shielding layer adopts single-ended grounding; high voltage wire adopts inner and outer double-layer shielding method, adopting double-ended grounding; engine cable main plug and accessory end plug use marine resistant series connectors , The tail attachment uses shielded tail attachment to ensure 360° shielding continuity; after the wires are bundled, a light anti-wave sleeve is used for protection; the bifurcation point of the engine cable is overlapped with a high temperature resistant braided jacket and selected The integrated braided anti-wave sleeve technology ensures the continuity of the shielding at the bifurcation; the wire shield is connected to the connector housing through a section of anti-wave sleeve, and the induced current of the shielding layer is safely released through the ground, and it is guided through the bracket connected to the engine To the engine shell, improve the cable anti-electromagnetic interference ability.

A special grounding component is designed on the chassis panel for grounding connection. The +28V ground of the electronic controller and the shell ground are short-circuited at the grounding pole; all secondary power supplies in the electronic controller are grounded at a single point; digital ground and analog ground Single-point connection at the A/D converter can effectively prevent the digital circuit noise from interfering with the analog circuit and leaking to the cable; the components that need to be grounded in the shell are close to the heat-conducting plate, and the heat-conducting plate and the case maintain good electrical contact , Can reduce electromagnetic radiation.

The surface of aluminum alloy material parts such as box body, panel and back cover are treated with conductive oxidation, so that the surface treatment layer has a good conductive effect, and the connection resistance between the parts of the chassis is low; the chassis shell has a good anti-electromagnetic radiation effect The combination surface of the panel, cover and the box body adopts the groove plane matching structure; select the compressible sealing material with high shielding effect to seal, such as socket gaskets and chassis shielding strips to achieve good electromagnetic shielding effect; Add a transient suppressor between the sensitive circuits of the electronic controller to reduce it to the level that the circuit can withstand; improve the circuit design of the anti-damage level, select a device with certain protection, increase the overvoltage and overcurrent protection; improve the ability of the functional circuit to withstand abnormalities The hardware design adopts certain functional redundancy design and fault isolation technology to prevent the propagation of faults and avoid adverse effects on other functional circuits.