Brumby said:
If it is a training sortie generation exercise, would the nose be facing in after recovery if the intention is to refuel and then relaunch? I noticed typically USN aircraft are nose facing out. Am I missing something?
Click to expand...

When every 40 seconds an aircraft hits the deck, there is no time to connect it with a towing tractor and push it backwards. You have to split the incomming aircraft one forward one to the aft to get the landing strip immediately clear. The aircraft will taxi on their own power to reach their parking position in the shortest time possible. After all aircraft are recovered, you respott the deck, rearm and refuel them, and than can bring them into the air again.

This is the scene after all aircraft are recovered and pushed from the foredeck to the stern for refueling, rearming, and a new departure:

Aircraft #120 is one, that seems to be recovered from the recent mission. Number #118 and #111 may be aircraft that remained on deck while the other aircraft performed the mission.

If I am not mistaken isn't the guard helicopter meant to be airborne rather than on deck if an aircraft launch is imminent?
Click to expand...

This is a showpiece for a beautiful photo. The guard helicopter is still on deck, the next departure phase has not yet begun - if it was planned at all.

Explanation of separation for landing (this example on a land base, but the principle is the same):


Four aircraft coming in on the upwind leg (in landing direction overhead the field), than split off every 10 seconds, turning to the downwind leg and separate for an other 10 seconds = touch down will be every 20 seconds, that is normal for a land base. On an aircraft carrier, where the aircraft comes to a full stop and the arresting wire has to unconnect and rolled up, 40 seconds is standard.

Example of a carrier traffic pattern:

This is with 10 to 15 seconds splitt, that means 20 to 30 seconds apart on final. As far as I know that is very taff and not normal.

Training of the J-15 pilots of the Chinese naval air force. 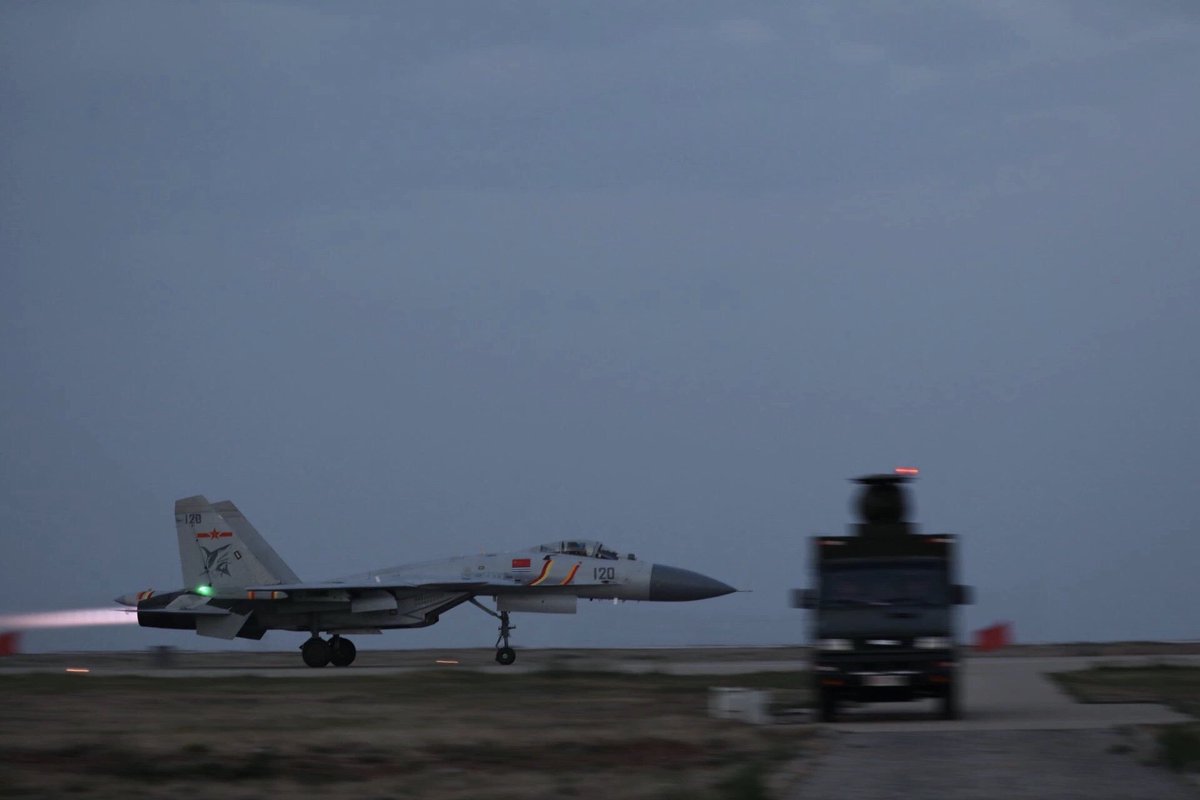 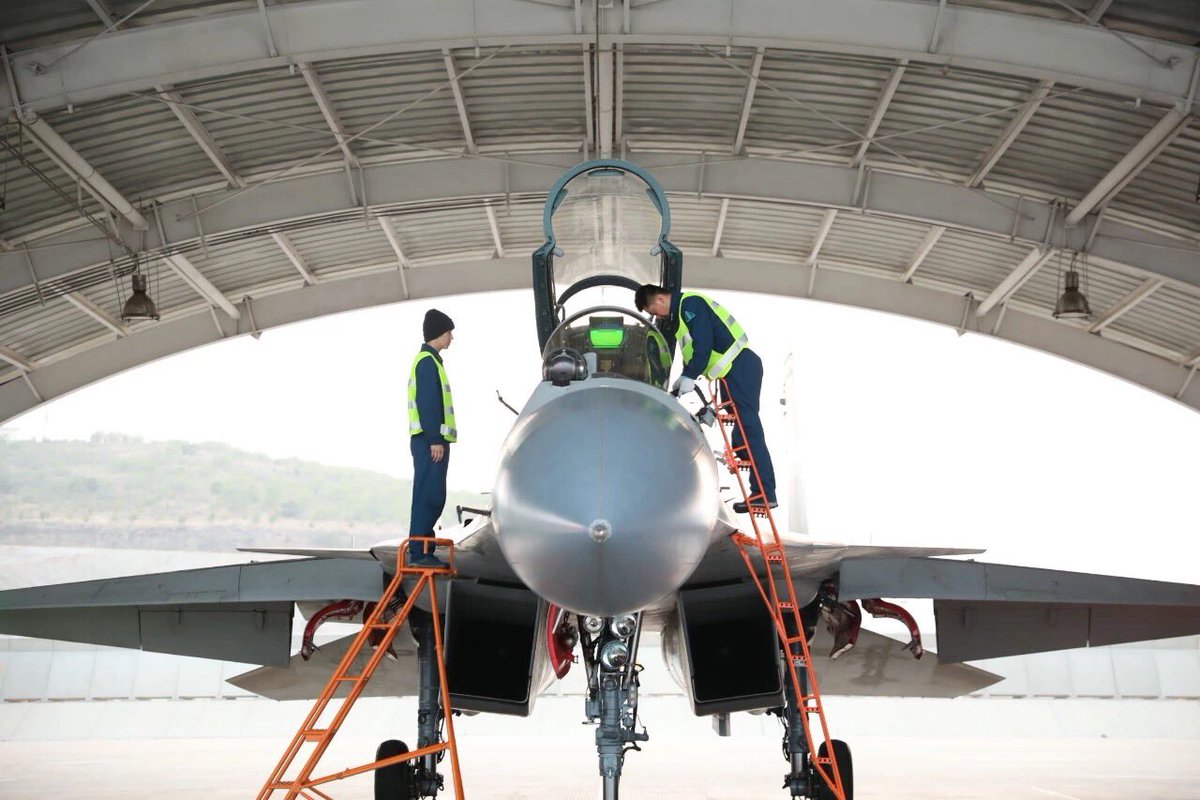 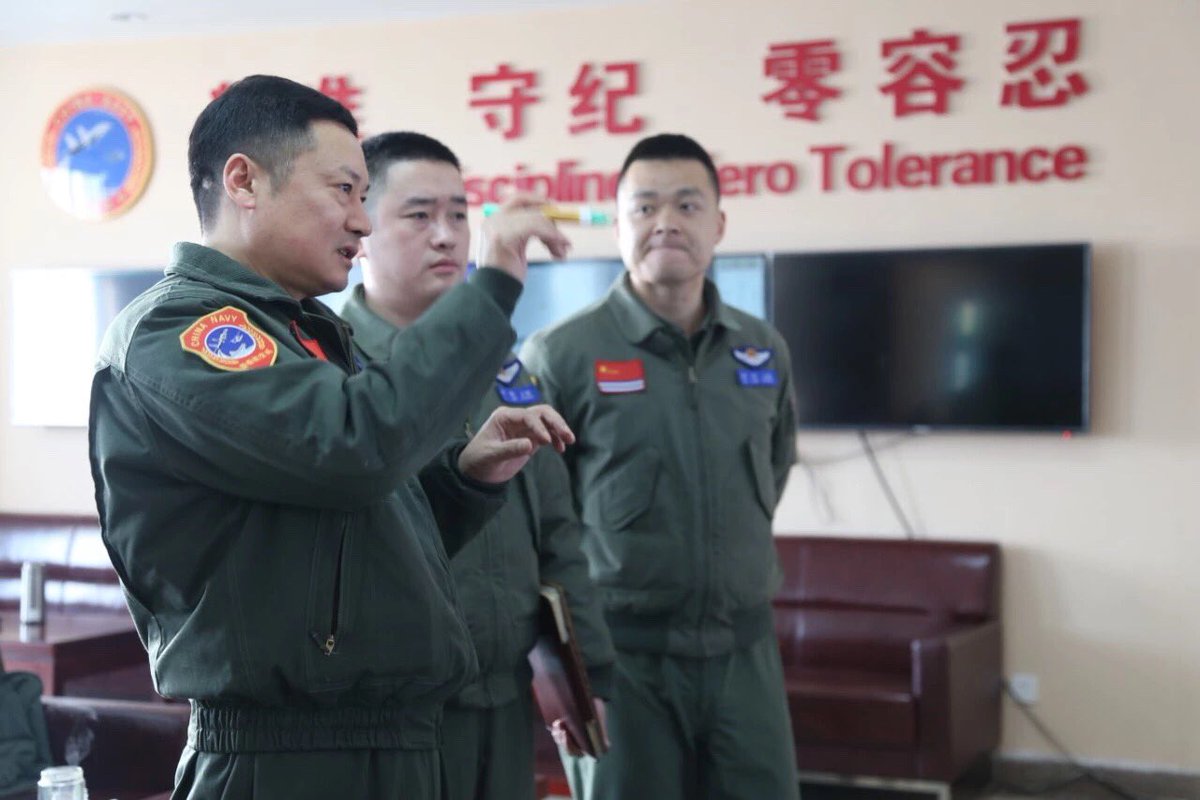 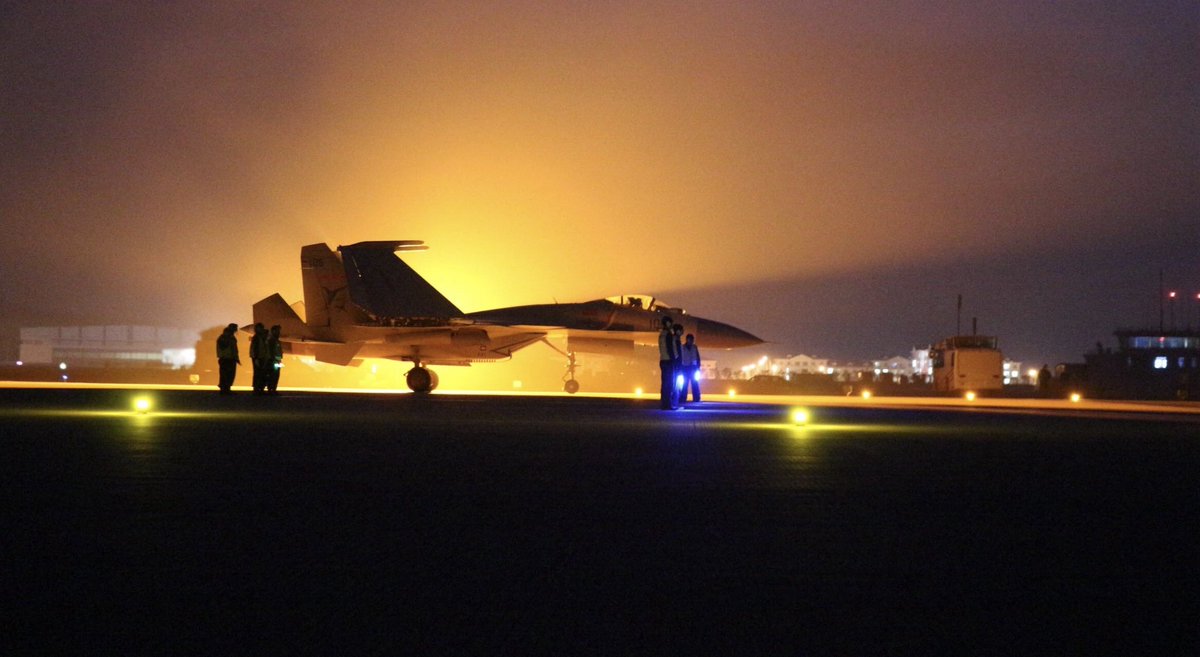 Some good night time operations to be seen on this video og the Liaoning:

Deino said:
"with the current production rate"???? I thought it was stopped after no. 123? ... at least we have not seen any aircraft with a number larger than this.
Click to expand...

I too am bafffled by this since they have the 2nd carrier built and ready or Naval trials and commissioning, and a 3rd carrier building.

Particularly since they have a CATOBAR version of the J-15 ready for production.

I have to wonder if they have decided to go a different route for their carrier air wings...but if so, then what?

...and they are decidedly working from a position well behind the mark if that is the case.

I would expect that they would build J-15s for CATOBAR operations and use them for both while they develop something new...but right now it appears that their priorities are such that they are not building any new J-15s while they continue building carriers and this is so unlike the Chines and the PLAN and their very deliberate and careful development and progress to date so far.

If anyone knows of a picture of any operational J-15 above 123...please, please show us a pic of it.

VIP Professional
Some musings here. SAC had two lines in 2000s and even early 2010. The big line was making Flankers. Roughly two dozen a year. The other line was making J-8. Around half a dozen a year, maybe a bit more. Then around the time when the last recon J8 was delivered, we started getting serial J-15. The output of other flankers, the J11s was still the same, roughly two dozen per year. It took some 3-4 years to get these 24 or so J15 delivered.

Then several years ago the J16 production started, taking over J11. But we're seeing some very high numbers in fairly short amount of time. There've been image of 4th batch with 30 airframes and already 5th batch afterwards.

So the theory is that the plan for J15 production changed at some point. Instead of upkeeping production at 6-8 per year, they stopped it completely. Possibly to also wait for development of another variant to be ready, benefitting from J16 subsystems. Next carrier wouldn't be ready to receive planes before 2019/2020 anyway. At the same time, J16 production rate could be expanded, without other models to worry about. So now we're seeing a lot of flankers made, perhaps 30 or more per year, all J16.

Maybe it was deemed that it'd be more effective to have one batch made just of future J15. So perhaps right now, as we speak, instead of 6th batch of J16, SAC is producing 30 something J15s. And it may be that by 2020 we will simply see A LOT of them appear at once. Well, not at once. Maybe we'll get to see first ones by the end of this year, but then also most of the other 30 throughout 2020. And then another batch or two of J16, if needed, before a second batch of improved J15 just in time for the 003 carrier.

Perhaps at some point there will be again a need for two models to be produced in parallel. Especially if SAC is indeed working on other, new planes. Like the FC31 based plane or a large twin seat striker.

Using GE imagery of SAC facilities and their expanding area may give some clues but frankly, without context it doesn't have to mean much. For example, FC31 prototyping may need a new large building. Or some of the testing that SAC perhaps outsourced is now done in house, in newly built halls. That's why the following additions may not mean much (but also may be significant)
In 2012 two halls were added, each 17 000 square meters large.
In 2019 one more hall was added, 30 000 square meters large. This one is particularly interesting. It's a 80 by 400 meter building. Way too big for anything other than manufacture/assembly. BUT. while it may be for added military production, SAC also makes parts for commercial airliners. I found it makes the whole tail section for ARJ21 (pretty voluminous) and the vertical tail for C919. As those two types are ramping up production, more space is needed. ARJ21 is at 20 tail sections per year now, to be expanded to 30+ in a year or two.

Some high-resolution screen captures. The first one is a nice image of hangar operations.

3 to be precise, what’s the highest number we have seen in the hanger?

And please don’t go into how many it “can” fit rather just how many have we seen
You must log in or register to reply here.